Do you already know what a VPN is, and you’re just interested in finding the right one? Here’s a quick refresher to anyone who feels like they should know the lesson but is secretly hoping to go over it one more time.

A VPN is a useful tool that lets you mask your IP by connecting through another point, usually a separate server in a different location. It allows you to visit sites, access networks, and run online software all through a different IP than your own so that almost nothing online would be able to know your identity by tracking your IP address. It conceals your digital footprint.

Every VPN offers this basic service, but what sets them apart is the quality of this function and the additional features. That’s what we’ll focus on to determine who is the winner between PureVPN and ExpressVPN.

PureVPN is one of the VPN services that have been around the longest. With its humble beginnings in 2007, PureVPN is now among the higher premium VPNs currently on the market. It has grown into one of the bigger VPN services over the years and finally has skin in the game with some of the other giants.

ExpressVPN started out back in 2009, and since then, has grown over the years proportionally with the surge of public interest in VPNs. Now, it finds itself as one of the biggest VPN providers out there and has earned itself a respectable reputation as being worthy of its spot around the top of the list.

Both ExpressVPN and PureVPN are considered premium VPNs. Quality is to be expected with both, and you should definitely be getting your money’s worth. However, if you really want to know the absolute best option between these two VPN services, we hope this article will lay out everything you’ll need to know to make the right choice.

As mentioned, both services are obviously going to offer the basic functions of a VPN, and both come with unique features and qualities.

One of the most significant factors of a solid VPN is its speed. This is because, due to how VPNs work, they will always reduce your download and upload speed by a certain degree.
When you use one, your internet connects to the VPN and then finally passes through to connect to wherever you are trying to visit online. That creates an additional stop that your internet has to take before it can reach its final destination.

As such, the question isn’t which VPN has no delay, but instead, which VPN has the lowest delay. The speeds that VPNs get all come down to which communication protocols they use, but that’s a topic that could fill an entire article. Instead, here are the actual speeds that each VPN can pull.

On a 500 Mbps connection with most locations, ExpressVPN typically ranged between a 120-160 Mbps download speed. This isn’t exactly the fastest speed on the market, but it’s not awful. It puts ExpressVPN under a few of the bigger names on the list, but it’s nothing to scoff at.

On the other hand, with the same original speed, most locations using PureVPN averaged a 40-80 Mbps download speed. This result isn’t great at all. Where ExpressVPN slowed the connection to a light walk, PureVPN dropped to a crawl. It’s by no means one of the worst on the market, but that speed is certainly nothing to write home about.

ExpressVPN wins this round.

This factor won’t affect the actual VPN itself all that much. The only reason this might be of interest to you is, for one, the base location usually signifies where a large chunk of their servers will be stationed. And secondly, it also dictates what laws the company has to abide by.

PureVPN is based in Hong Kong while ExpressVPN is stationed in the British Virgin Islands in the Caribbean. Despite practically being on opposite sides of the world, this shouldn’t affect the services that both companies offer too much.

Technically this round counts as a draw.

VPNs usually come with some sort of custom software to allow you to connect to and use them with ease. What sets them apart is the user-friendly interface, compatibility with different types of devices, and overall quality. Here’s a look at the software from both services. 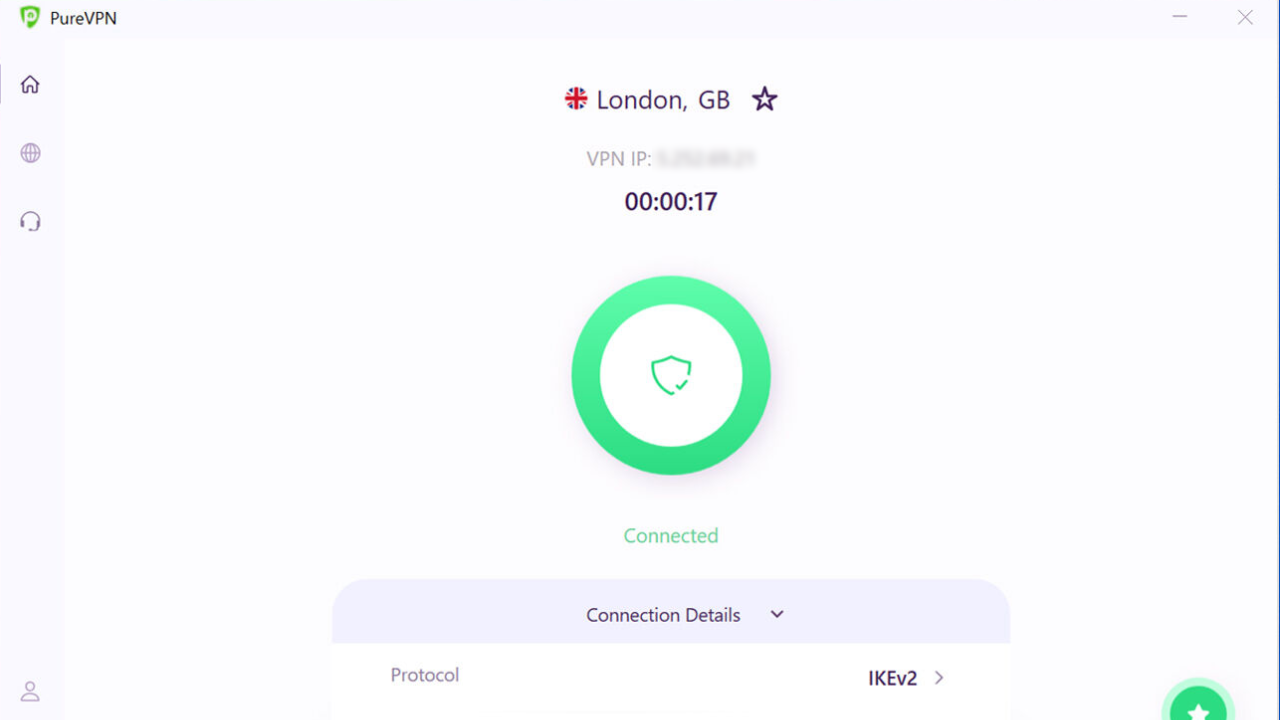 PureVPN’s software is compatible with Windows, Mac OS, iOS, Linux, Android, Kindle, Fire TV, and Firestick. It’s widely compatible and has a very pleasing interface that shows enough connection details to understand whether or not something went wrong.

Unfortunately, more often than not, something indeed went wrong. 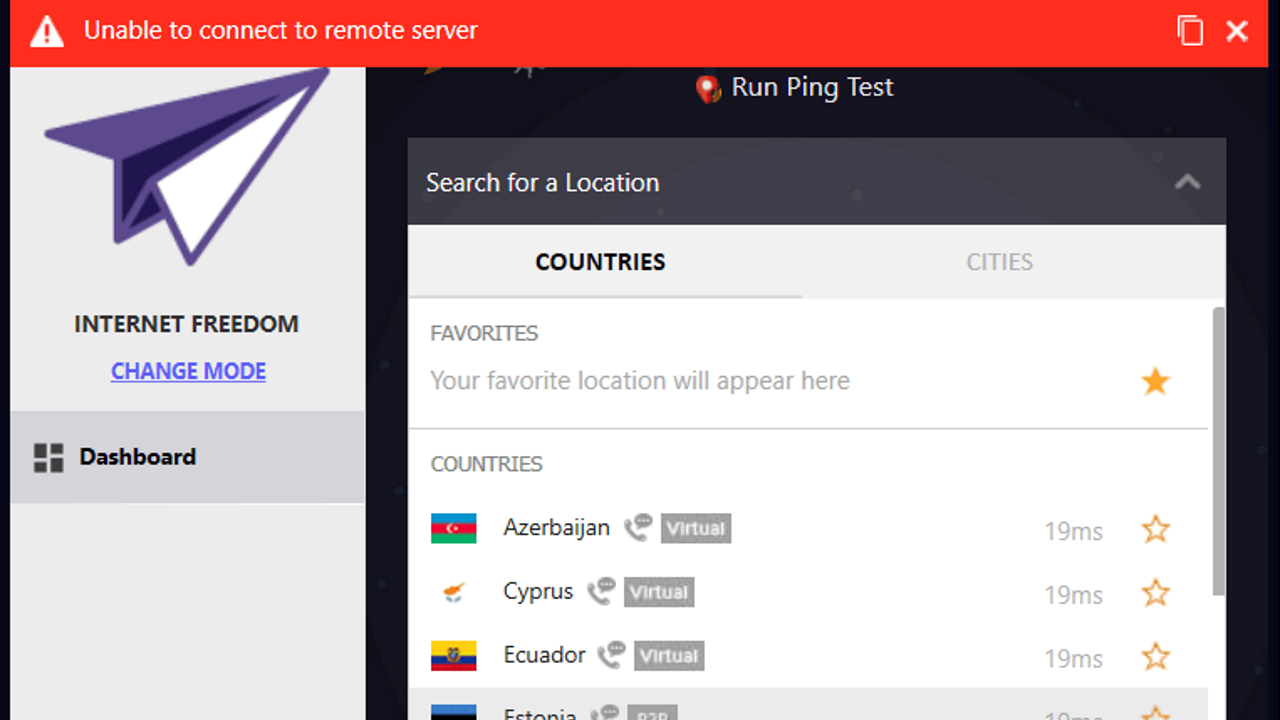 Many users report experiencing extremely low reliability with the app and a lot of crashing and connection issues. On a Reddit thread, a user named HungryGeorge wrote that usage of the software actually froze up other programs during use. 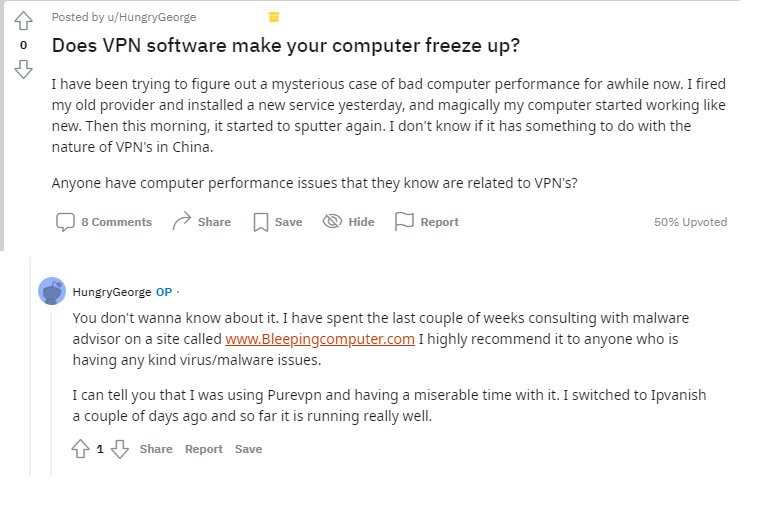 It is by no means as optimized as one would hope, but it gets the job done. The software has also seen some major improvements over the years, but it’s still not perfect. You can download PureVPN’s software here for free.

ExpressVPN’s software is compatible with Windows, Mac OS, iOS, Linux, Android, Chrome OS, Fire TV, Firestick, Kindle Fire, and Chromebook. This custom software is beautifully simplistic. The interface is extremely easy to maneuver, usually not having more than a handful of buttons on your screen at any given time. You can move around the program, change settings, and go back to what you were doing, all within the span of a few seconds.

It’s quite reliable, usually suffering nothing worse than a quick freeze every now and then, but rarely ever crashing. The connection time is typically quite fast, and we’ve had no major problems with it in testing. You can find ExpressVPN’s software here.

ExpressVPN takes this round as well.

Unlike the base location, the locations and count of the servers for each service absolutely affect the VPN. The options of where you can connect directly influence the speed and reliability when using a VPN. So how do these two services compare?

Over the years, ExpressVPN has amassed an impressive collection of more than 3,000 servers spanning a total of 95 countries. This places it among the higher counts of premium VPN services and makes for a pretty reliable connection no matter what location you want to use.

That being said, this is where PureVPN really shines. PureVPN is considered one of the most widely spread VPNs on the current market. It has about 6,500 servers covering a total of 140 countries. That is one of the greatest collections of servers that you can find on the market.

PureVPN wins this round by a landslide!

When using a VPN, most services limit how many separate devices you can have connected at once. Most people typically won’t need more than a handful at any given time, but the option is always nice in those rare times where you just don’t have time to wait for a download to finish and need to get another device on the VPN as soon as possible.

ExpressVPN has its limit at five simultaneous connections. This is a pretty standard limit for VPN providers, and most customers will rarely find themselves at odds with this cap.

On the other hand, PureVPN has a limit of ten simultaneous connections! This is a pretty generous limit and one that most customers would never have to worry about. While this cap would hardly ever be reached, it’s always good to have the option.

PureVPN takes this round as well!

If you’re looking for a VPN at all, chances are security and privacy are pretty big factors to you. To determine how well each service handles its privacy, we’ll look at two factors. The first will be their encryption methods. Essentially, how they scramble the information and data being passed between you and the VPN server.

Both ExpressVPN and PureVPN use something known as AES 256-bit encryption for their services. AES, or Advanced Encryption Standard, is an encryption method that supports the largest possible bit size and heavily encrypts your data to the point where it’s essentially unreadable by hackers or anyone that didn’t make that encryption.

It needs a key to read, a key that anyone but the provider won’t have. It’s pretty much standard for most VPN services at this point, but it’s been tried and tested. The verdict is that, yes, it’s very secure.

If both are on the same playing field for their encryption, then it comes down to the next factor: logs. Some VPN providers keep logs and records of all user activity. While this usually doesn’t have any major significance, it can become a problem in the event of a data breach or if an authority requests to be able to look through those logs. Many people demand that their VPN provider keeps no records of their activity whatsoever.

Both ExpressVPN and PureVPN claim to have a complete no-log policy. They state that no records are kept of user activity of any kind. However, in the past, PureVPN has had trouble providing proof of this claim. That, paired with China’s tendencies to take an aggressive approach to Hong Kong’s privacy laws, might be a point of concern for some customers. ExpressVPN, on the other hand, has had far fewer issues with maintaining its claims of keeping no logs.

Overall, ExpressVPN looks just a bit more reliable on this one.

While this might not matter to everyone, customer support can be a big deciding factor. We guarantee there are some people out there who have sworn off some services due to some particularly foul customer service. To help prevent that, we tested the customer support of both services.

Both providers offer live 24/7 chat services on their websites. From our tests, the chat agents were responsive and very helpful and had no problem guiding us through basic issues.

This one’s a tie!

While this isn’t technically a feature of the VPN by any means, it’s certainly important. No matter how great a VPN service might be, is it worth breaking the bank for a month of secure internet?

To help avoid a punch to the wallet, we took a look at the price plans of both services. With the monthly plan, PureVPN’s $10.95 is $2 lower than ExpressVPN’s $12.95 a month. Neither is exactly cheap, but most providers expect you to go with the longer plans anyway.

ExpressVPN’s biggest discount comes from their one-year plan, coming out to $99.95, or $8.32 a month. On the other hand, PureVPN’s same one-year plan comes out to $79.92, or $6.66 a month. They also have larger multiple-year packages that increase this discount.

PureVPN takes the last round!

Both of these services are high-quality VPNs. However, there are points where each excels.

Here is a visual of everything to keep in mind between the two.

Neither of these services is untrusted or has a poor reputation. While PureVPN has had mixed reviews, both are still among the top competitors of the market. That being said, we recommend ExpressVPN and deem it the winner of this comparison.