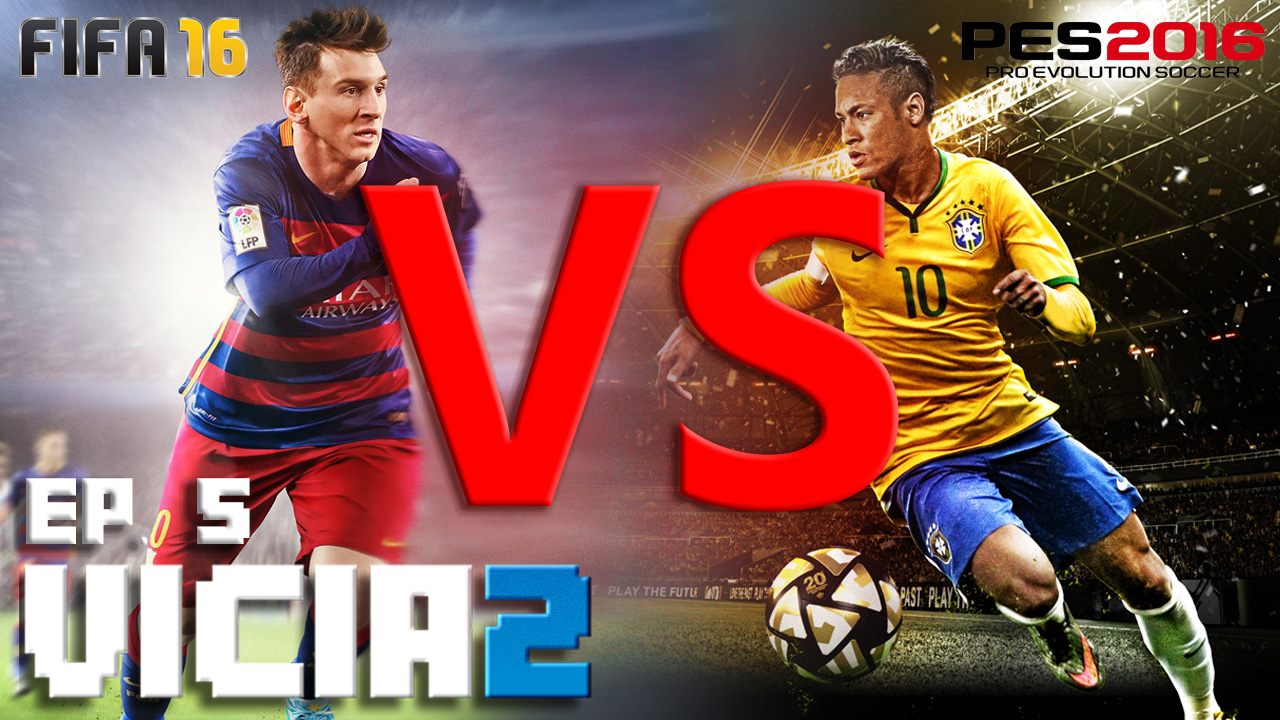 I have 10 reasons why PES 2016 is better than FIFA 16. I don’t care if you’re getting mad: they are 10 solid reasons. You can see a summarized comparison in this video, or read the full list below:

The players in PES 2016 are more realistic 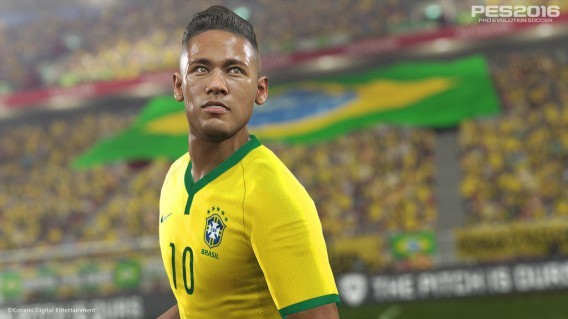 In PES 2016, Messi behaves like Messi. Cristiano Ronaldo IS Cristiano Ronaldo. Your favorite teams use tactics that you will recognize. For example, Mourinho’s Chelsea will close up in the back if you begin to score too much. But the realistic behavior extends beyond just the star footballers: the artificial intelligence as a whole guarantees that your teammates (and your opponents) will behave just as if they were playing a real match. FIFA 16 has not achieved this feeling of authenticity.

The passes in PES 2016 are perfect

The passes in PES 2016 are fast and fluid. They encourage you to work as a team. In FIFA 16, the passes are slow and suffer from a certain lag between your command and the executed action. The situation has turned around completely, since the passes were one of the big criticisms of PES 2015. That’s what I call accepting your mistakes and improving upon them.

The matches in PES 2016 are more unpredictable

In the FIFA games, the same thing always happens: the player who has the ball only has to take two or three steps and run at full speed to face the goalkeeper. In PES 2016, Konami has given you lots of defensive options, making reclaiming the ball as feasible as in a real match.

The graphics in PES 2016 are incredible 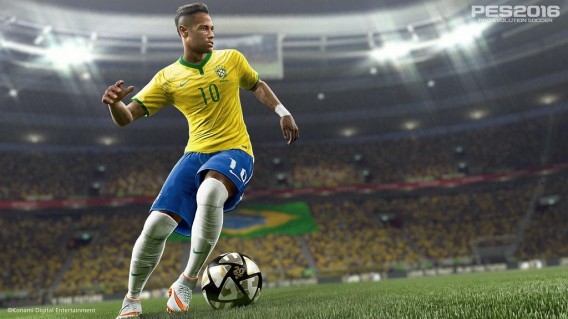 The footballer’s faces in PES 2016 are just great. Especially the most famous ones. This despite the fact that Konami could not implement a facial scan like EA Sports usually does with big teams! Keep in mind however, that our findings only apply to the PS4 and Xbox One version of PES 2016. The PC version is a disaster for reasons we will explain in a special article.

PES still contains the Champions League and the Europa League

Admit it: if you’re a fan of FIFA, this is what hurts most. You spent years wishing that EA Sports would buy the Champions and Europa League licenses. But no! Pro Evolution Soccer owns them once again. Yes, I know that FIFA 16 has more licenses in total, but I wrote this just to annoy you.

Master League is better than the Career Mode from FIFA 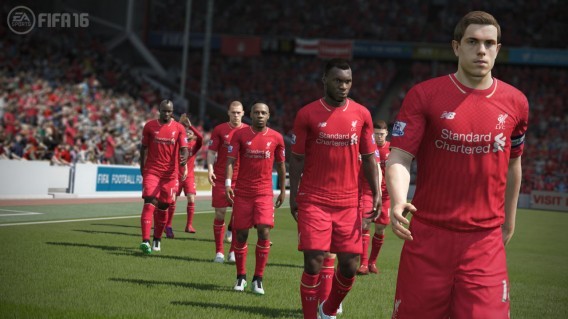 Master League in PES 2016 is now a clean and fluid mode. The menus are intuitive, the new transfer system easy to learn. At the same time however, Master League is a complex mode brimming with details. FIFA’s career mode is too linear and simplistic for my taste. Not very next-gen at all.

And speaking of game mode comparisons…

MyClub is catching up to FIFA Ultimate Team

First of all, a disclaimer: both modes seem too intrusive for my taste. It should be noted that EA Sports and Konami both developed them so that you would pay them more money after having bought their game. That said, MyClub is slowly progressing from being a shameless copy of FIFA Ultimate Team and turning into a star on its own.

The celebrations in PES 2016 are amazing

Francesco Totti takes a selfie on his iPhone when he scores a goal in PES 2016. Need I say anything more? On that note, allow me to say that it’s very sad that FIFA, a series that has always prioritized immersion before gameplay, has lost this year in terms of celebrations. Weak, EA Sports, very weak.

PES 2016 has too few licenses? There is a solution 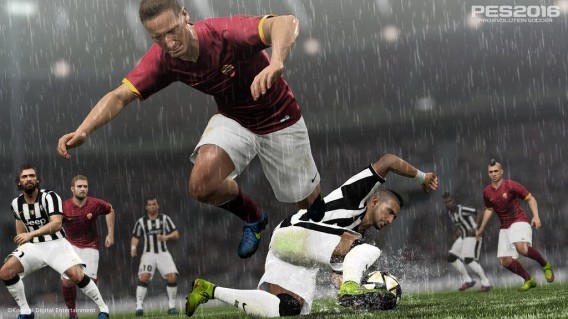 Konami has allowed even more options for players to create the teams, leagues, and equipment that are not available in PES 2016 for licensing reasons. This used to be a painstaking process on consoles. Now all you need is a USB. And with this decision, the amount of licenses in FIFA loses its importance.

The aerial duels in FIFA 2016 are almost automatic, while PES 2016 allows you to control them. But this detail is not limited to headers in the air. PES 2016 generally puts a lot of trust in you. By giving you total control of the ball in each moment, every match becomes an epic battle. I have not encountered the same frenzy I feel while playing PES 2016 in any of my FIFA 16 matches. 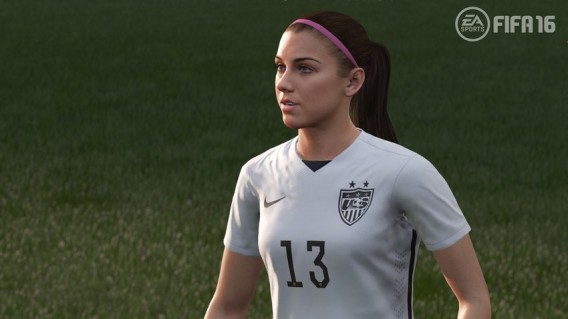 To ensure that you don’t feel too mad when reading this comparison, I will recognize the virtues of FIFA 16.

Women: it was high time that one of the two soccer series put female soccer players on the field. Furthermore, the 12 female national football teams in FIFA 16 are in no way mere copies of the “guys”. They behave in different ways, forcing you to create new strategies.

Immersion: the commentators, the camera movement, the real-time reactions from trainers during the match… if we are focusing on the spectacle, FIFA wins by miles. I’ll go even further: if this is all you care about in a soccer game, you should download FIFA.

FIFA Ultimate Team Draft: it is a joy to be able to quickly play FIFA Ultimate Team. I like the idea behind this mode (save for the micro-transactions) and Draft allows me to enjoy the game for a few minutes rather than spend hours managing and preparing my team.

We invite you to leave a comment below this article or join the discussion on our comparison video. Let us know about the strengths of your favorite game and the shortcomings of the other, foul-smelling game. You have free reign to give whatever opinion you might have. Just be respectful about it.