5 reasons to switch to Windows Phone

Nokia has announced its first Windows Phone 7 devices at the giant’s Nokia World event in London. The long-awaited LUMIA 800 and 710 were revealed amid fanfare about their software capabilities. Besides including all the standard Windows Phone Mango tools, the LUMIA 800 integrates bespoke Nokia services such as turn-by-turn voice navigation, a music service and an ESPN sports hub.

I think it’s fair to say that with Nokia now packing Windows Phone 7 into its new devices, Microsoft’s mobile operating system has become a strong alternative to the iPhone and the top-end Android devices.

If you’re choosing a phone now, you should definitely give some consideration to Windows Phone 7 – it has a number of advantages over iOS and Android. Here’s a quick run-down of some of the reasons to switch to Windows Phone 7:

In my opinion, the user interface in Windows Phone 7 Mango is a cut above both iOS and Android. Not only is it more beautiful, it’s more functional and easier to use than the Apple’s and Google’s mobile operating systems.

At the heart of the stylish-looking Windows Phone 7 UI are Live Tiles and Hubs. Tiles are squares that appear on the start screen instantly letting you see what’s going on. From unread emails and missed calls to the latest social network activity and sports scores, everything is visible without having to open individual apps. Any app can be pinned to the start screen to give you instant access. 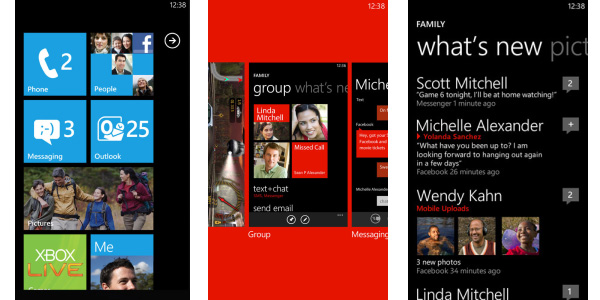 Hubs in Windows Phone Mango are great because they allow you to organize lots of information in a single spot. Take the People hub, for example, which allows you to connect contacts with Twitter, LinkedIn and Facebook so you can keep track of what your friends and family are doing in a practical and visually appealing way.

With its Mango update, Windows Phone 7 became the first mobile platform to really get multitasking right (unless you count the now defunct webOS). You can switch through running apps just by holding down the back button. This will zoom out of where you are and display running apps like a deck of cards, allowing you to flick through them and select the one you want.

If you use your phone for work, then the integration of Microsoft Office into Windows Phone is something you’ll get a lot from. 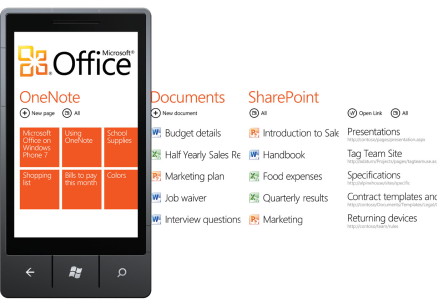 Office is still the king of productivity suites, and with Windows Phone 7 you have exceptional scaled down versions of its key tools at your fingertips. Besides being able to effortlessly view, edit, export and share Office documents, Windows Phone provides native Exchange access with Active Sync updates. The email application supports multiple Exchange accounts, as well as the ability to connect with third-party email services such as Gmail or Yahoo! Mail.

Besides being great for work, Windows Phone 7 provides lots of opportunities for recreation too, not least its Xbox Live-supported gaming center. 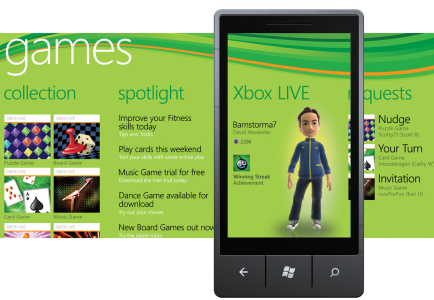 The games hub allows you to access and edit your Xbox Live profile and play XMA-based Xbox Live Arcade games. Multiplayer on Windows Phone 7 is seamless, with the ability to challenge your Xbox Live friends and play turn-based and realtime games over the internet. The Xbox Live hub far outstrips Apples’ iOS Games Center, with better implemented achievements and animated avatars that you can customize to the hilt.

Despite Microsoft’s tie-ins with big developers such as EA, the selection of games available for Windows Phone is still far below that of iOS or Android. However, more and more quality titles are springing up and will continue to do so as Nokia’s Windows Phone 7 devices hit the mass market.

Try before you buy

The ability to test out premium apps before you buy them is one advantage Windows Phone 7 has over the app delivery models adopted favored by iOS and Android.

All paid apps and games on Windows Phone 7 offer a trial version, allowing you to test them before you decide to buy. Unlike iOS or Android, there’s no need to go through the rigmarole of downloading the free version, testing it, then uninstalling it and buying the full version – Windows Phone 7 keeps things really simple.

Windows Phone 7 comes with many useful Microsoft apps and services out of the box, including Bing, Internet Explorer 9 and Sky Drive. Get a Nokia LUMIA device and you’ll have even more built-in tools to improve your life. 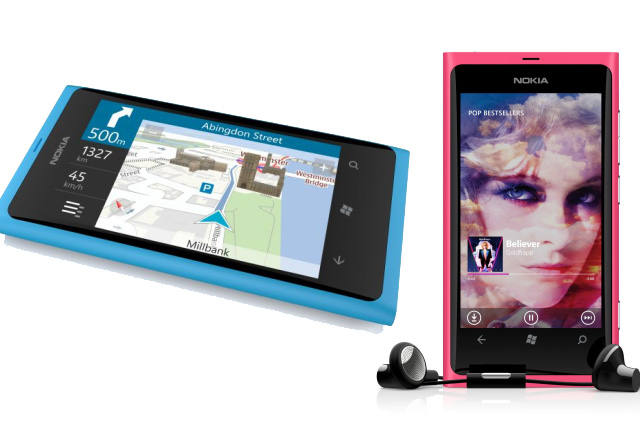 Nokia also announced three important new services that will come bundled for free with the LUMIA 800 and 710: Nokia Drive is a turn-by-turn voice navigation system that gives you directions and maps in a huge variety of locations; Nokia Music is a new service that allows you to listen to and download tracks and mixes at the touch of a button – without the need to subscribe to a service or sync your device like you have to with iTunes; Nokia Sports is a dedicated sports channel provided by ESPN, offering quick access to scores, results and information about a huge range of sports teams and players.

Other Nokia apps such as Nokia Maps and the new Nokia Public Transport app, which gives you up-to-the-minute bus and train information, add even more value to the embedded experience of Nokia devices.

The advantages of getting one of these new Nokia phones over an iPhone or an Android device are clear. However (and it’s a pretty big ‘however’), when choosing a smartphone, you should also consider what systems and services you use regularly.

For example, if you have an Apple laptop, an iPod and are a regular user of iTunes, the iPhone is still the best product for you. Likewise, if you have Gmail and use Google’s cloud services all the time, you’re better off with an Android device.

If you’re a regular PC user and have no particular allegiance to Apple or Google products, however, a Nokia Windows Phone 7 device could be the smartest way to go. Practical, elegant and functional, the new LUMIA handsets represent a rejuvenated Nokia. Now, if only the price would drop a bit!

How to Group Tabs in Chrome in 5 Fast Steps