There are a lot of racing games on mobile devices. Obviously some are better than others, but one of the main challenges in mobile racing is the controls. Regardless of the visuals and gameplay, if you can’t control the car well enough then the entire experience is worthless.

Auto Club Revolution is the first PC game from Eutechnyx, a developer who knows a lot about how to make racing games with work behind NASCAR: The Game. The game is highly regarded in the free-to-play market as a realistic and challenging racer. 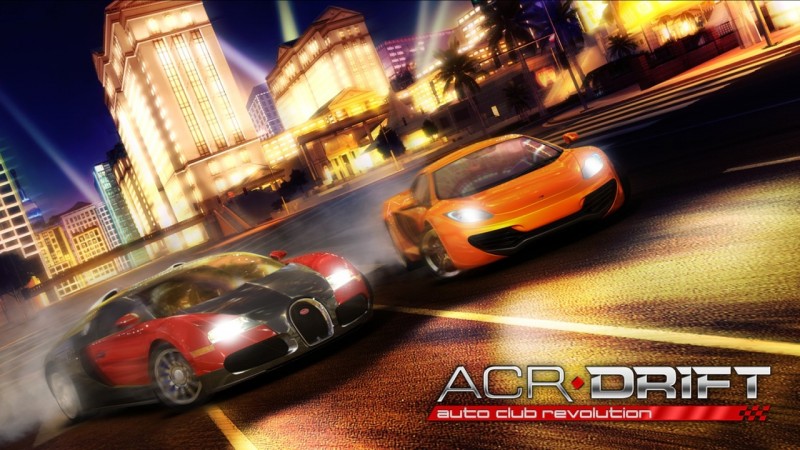 To enter the mobile space, Eutechnyx partnered with CROOZ, a leading Japanese mobile game developer. CROOZ is best known in Japan for its mobile trading card games. Developing a racer was something new and different. The result of the collaboration is ACR Drift. A very simplified racing game focused on drift mechanics, ACR Drift is aimed at the casual racing fan.

When I try mobile racing games, they usually attempt to include the main control schemes of cars. Gas, brake, e-brake, and either touch or accelerometer steering. This leads to over or under steering and a general necessity of caution making games frustrating. With the free-to-play model so popular now, games often artificially add on ways to make you wait to complete simple tasks like upgrades or even enter the next race. 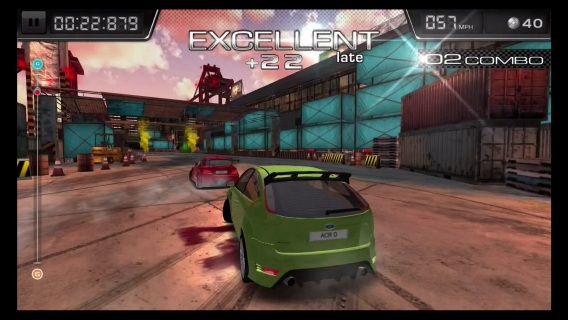 ACR Drift is different. It relies on swiping and little else. Since the core of the gameplay is focused on drifting around corners, the game is developed around precise timing. Talking with Chris Nelson of Crooz, he said that ACR Drift was developed to let casual players experience a racing game without getting frustrated by complex controls.

Early races teach you how to play. The start requires you to press the gas pedal which starts the timer to begin the race. To get an extra boost off the start line, you have to keep the engine in an optimal green zone. If the time hits zero and you’ve maintained the engine revving, you get a boost and extra points. Providing gas is no longer necessary because ACR Drift takes over.

You can steer by swiping left or right to change lanes. It’s not really noticeable early on, but there is a bug in the game when you start a race and there’s a car incoming head on. With your opponent so close, you often hit the NPC car and lose a lot of ground. In these short races, this means you lose because there’s not enough track to catch back up. 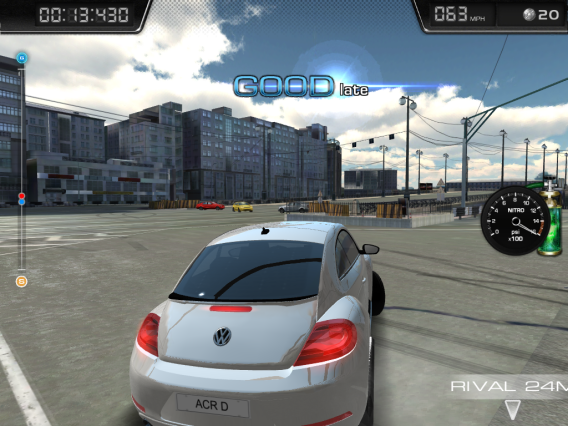 At turns, the car speeds to a white strip with arrows to tell you which way you need to swipe. Depending on how precise you are, you earn a ranking with points. The closer to “Perfect” you get, the more points you get at the end of the race. Nelson said that early races were designed to take around 15 to 30 seconds to allow quick play. Later levels will require more time and effort because they are more complex with over the 25 different courses around the world. Add in the 50 plus licensed cars with visual and performance upgrades, and there’s a lot to experience.

Nelson stated that visual upgrades don’t give you added benefit during races, but customizations do give you additional points during races. Since points convert to in-game money, improving the visual look of your car is a good investment as you earn credits each race. The performance upgrades are in stages and are designed to improve main areas in a car like the engine, exhaust, and springs. Cars have a limit to how tuned they can be before you have to buy a new one, but in the early stages it’s possible to improve a car’s performance high enough to win in your class.

The inclusion of over 50 licensed cars will excite any car fan and while ACR Drift can’t meet the number of cars of games like Gran Turismo, Forza Motorsport, or Auto Club Revolution, there are enough cars to have a lot of fun.

One of the best decisions that CROOZ made in ACR Drift was that upgrades are instant. There’s no waiting from the point when you buy an engine upgrade to when you can use it. Upgrades can be purchased with the in-app money earned through races or with the premium currency that can be bought with real-world money. 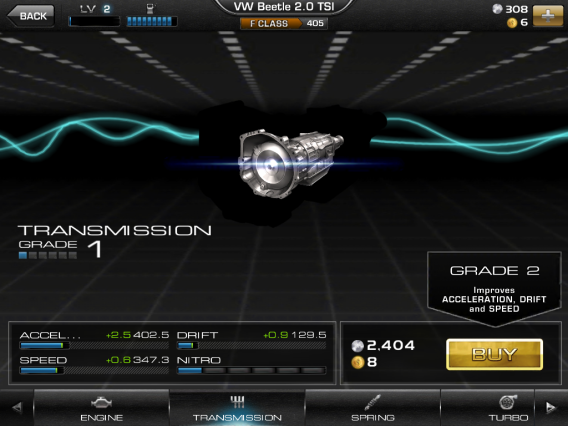 Visual customizations like changing the car color or decals cost premium currency and at a huge cost, around 100 gold which I found a bit confusing. Other customization options like new sidewalls or hood could be bought with both. I don’t know how long it would take to earn 100 gold through races, but it seems like it would take a long time.

In my time with ACR Drift, I’ve found that the ease of entry in the system is great for the casual player, though more hardcore racing fans may find it too simple.

CROOZ is a Japanese mobile powerhouse, but in the US the company has little recognition. Past attempts by other international companies like GREE have shown that simply pouring money into international expansion doesn’t work. ACR Drift’s precise gameplay mechanics, method of in-app purchases, and customization options are a solid base for a fun, if casual, racing game. Nelson said that CROOZ isn’t trying to attract the hardcore racing fans with the game, but the casual player who wants a racing game but doesn’t want to be confused with problems like controls or fine tuning parts.

One of the best mechanics of ACR Drift is the gas meter. Each race depletes one GAS point. If you have to retry a race, this will cost another point. The ten segments allow you to race ten times. I raced through ten races back to back and I was a little overwhelmed by the end. So the limited number of races is a way to combat burnout from the game. But if you want to keep racing, ACR Drift recovers a point every ten minutes. 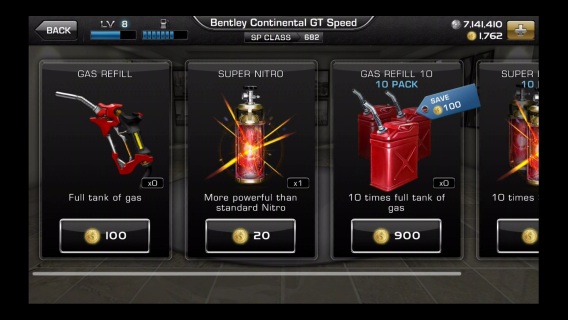 If you do want to race back to back, you actually recover a lot of gas during that time. There is the option to purchase a refill, but I don’t really think it’s necessary.

CROOZ has a good US debut with ACR Drift. It’s already attached to an established title that has fans worldwide. It also simplifies a genre that’s so focused on adding complicated and imprecise control schemes. What impressed me the most is that it uses free-to-play in-app purchases like it was in the early days. Instead of implementing time-based costs in every facet of upgrading, ACR Drift lets players race and naturally earn money. In all, it seems like a recipe for success.