If there’s one thing there’s no shortage of, it’s messaging apps. Whether you’re a first-time user looking to pick the best app, or are simply looking for one to streamline your communication, there are a few that stand out from the crowd in terms of user base, functionality, and additional features. Below are some of the best free messaging apps for iOS, Android, Windows Phone, and BlackBerry.

Facebook got a lot of heat for removing messaging services from its mobile app earlier this year, forcing users to download a separate Messenger app. Regardless of whether or not you’re a fan of the standalone app, there’s no denying that it’s one of the most popular ways to communicate on mobile with one of the largest user bases. 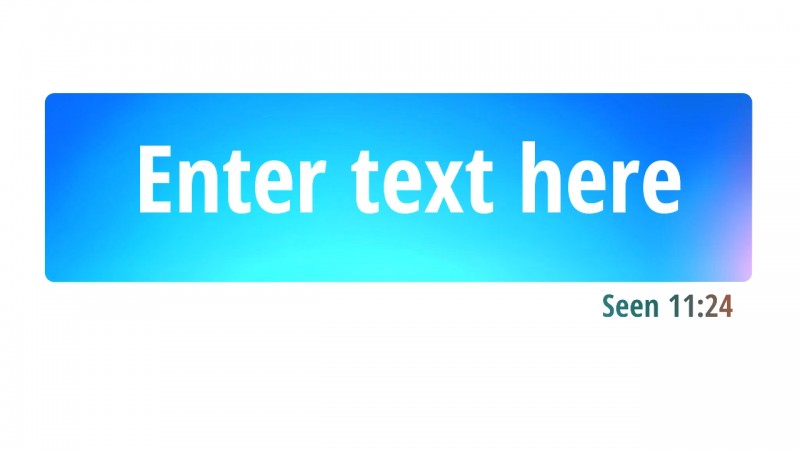 Arguably, making it a separate app has let Messenger compete with more classic messaging services like WhatsApp, letting you create group chats, send images, voice notes, stickers, and even make video calls. It’s biggest strengths are that the fact that it seamlessly integrates with Facebook in the browser, meaning you can take your conversation from mobile to desktop painlessly. If you thought Messenger was boring, it supports apps giving your chats a lot more life with support for gifs or videos. 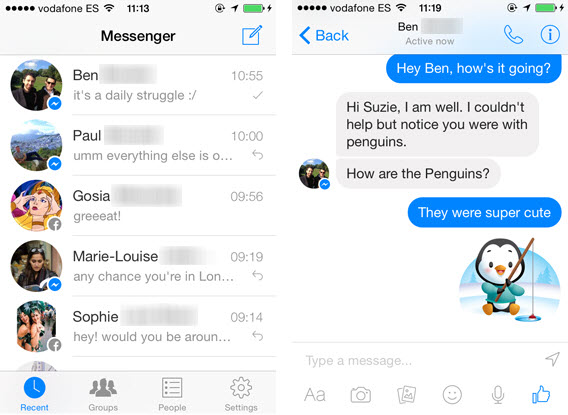 Facebook Messenger also has its own web client so you don’t have use Facebook to chat with friends.

WhatsApp was bought by Facebook for just shy of $20 billion, but that hasn’t deterred people from continuing to use WhatsApp. It doesn’t have anything that rival messaging apps don’t have, except for the largest user base. As of August 2014, it had 600 million monthly active users and continues to grow steadily. WhatsApp lets you send messages, voice notes, images and video, pin your location, share contacts, and create group chats. WhatsApp added a read receipt in the form of two blue checkmarks, letting you know when others have read your messages. You can also use WhatsApp on the web and chat with friends. 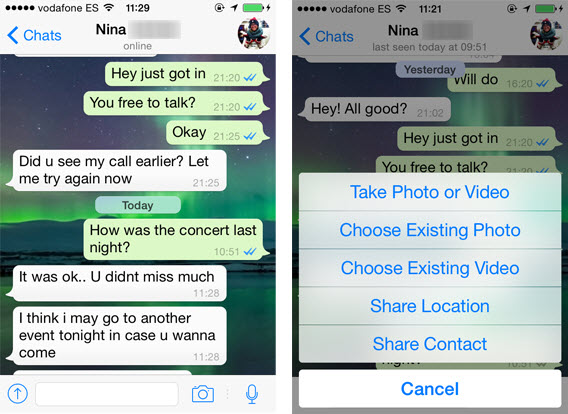 WhatsApp is free for the first year of use, after which you have to pay an annual fee of $0.99.

While HipChat is designed for team communication, it works as a standard messaging app. You can create different groups so your conversations are separated. You spend most of your time on the web or desktop app, but HipChat’s mobile apps work. One problem is that you will only get notifications if someone mentions you so the conversation can continue after you leave the app. You can share files and video chat, but the best use of HipChat is sending links of pictures that load in chat. 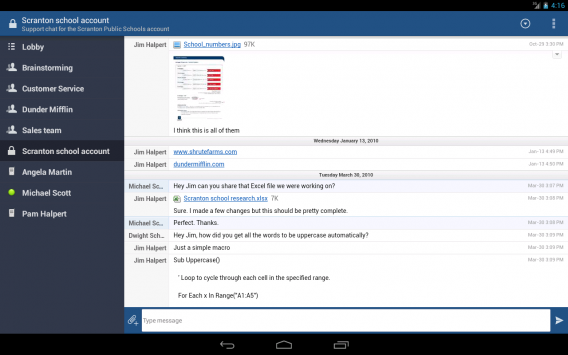 HipChat won’t replace messaging apps you use with friends, but it makes work communication a lot easier.

Slack is another popular team communication app. Also designed for businesses, it uses a simple channel system. A company can use a single domain for all its communication and people within the company can create different topic channels. You can send direct messages or create private groups that are invite only.


You can post links and images and get a preview without clicking on the link which makes ignoring boring links easier. Slack can also integrate with other tools like Dropbox, Hangouts, and Twitter. If you have multiple teams working together, Slack is a very useful solution for quick communication.

Skype rose to popularity as the desktop VOIP calling app that finally let you video chat with friends and family across the globe. In recent years, the software has taken the natural step of migrating to mobile, transitioning gracefully into a mobile messaging app. It’s primary use is still voice and video calling, and that’s apparent in the app’s simplistic structure.

Two options at the bottom let you either open the dialer to make a call, or start a chat with anyone from your contact book. The home screen houses recent chats or calls, and favorites. One of it’s great features is the ability to have video-conference calls with up to 4 people. 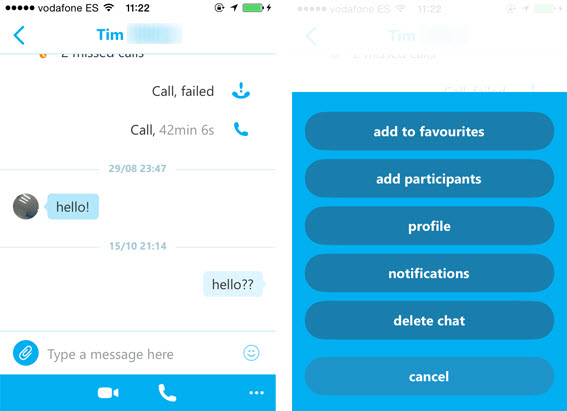 Without all the bells and whistles, Skype’s one of the simplest messaging apps out there if you’re a frequent user of the service and want to migrate all your communication to one app.

Viber’s more popular for its ability to make free VOIP calls than it is for its chat function, but its chat actually has quite a lot to offer. You can send doodles, which lets you draw an image on your touch screen and send it to a contact, as well as send photos, videos, and share your location. Like WhatsApp, it’s got customizable backgrounds and the dreaded ‘read receipt’. 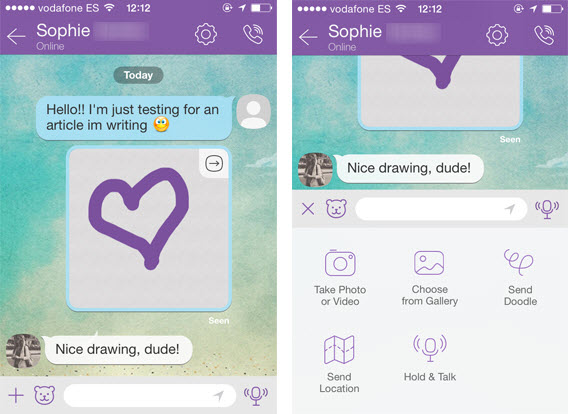 The real star here though, is its VOIP calling features. Much like Skype, you can voice or video call Viber contacts for free with the iOS and Android versions of the app. The VOIP call quality varies and is very much dependent on your connection speed, but when it works, it works well.

It’s most recent addition is Viber Out, which again, similar to Skype, is a feature that lets you buy credits and make calls to mobiles and landlines at low prices. Another notable feature is a desktop client that lets you move between mobile and desktop. A recent test by the EFF, however, shows that among its competitors, it’s not a very secure messaging option.

Hailing from Japan, LINE may not be as popular on this side of the world, but its one of the leading messaging services in Asia thanks to its cute and furry characters, attracting over 300 million users. Not surprisingly, one of it’s token features is a copious amount of stickers, some of which you’ll have to pay for. It’s also got a Snap Movie feature, which lets you record a video, add background music, and share with friends, as well as Hidden Chats, which similar to Snapchat, lets you send secure messages that’ll disappear after a certain amount of time.

Aside from these quirky additions, LINE is popular for its voice and video calling features whose quality rivals that of Skype and Viber. Similarly, it’s also got a desktop app to take your conversations from mobile to desktop and back. 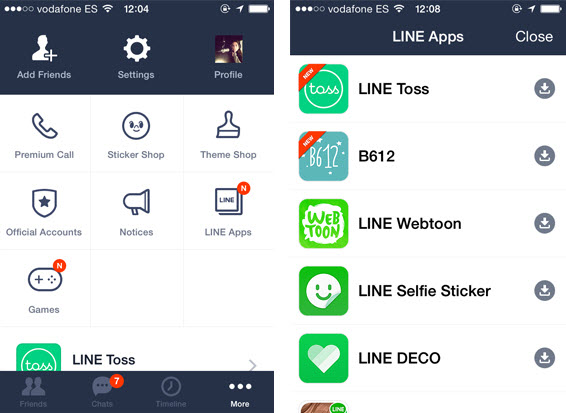 Expanding from it’s messaging roots, LINE’s also got a Timeline feature that lets you post things that your LINE contacts will be able to see, giving it more of a social-network feel. There’s also a slew of LINE games you can download for iOS and Android.

Like Line, KakaoTalk is the supreme chat app in South Korea. With an almost 1-to-1 install base, the chat app has evolved into its own platform for games, social networking, and photos. The app lets you share photos and video and you can make voice calls to friends anywhere in the world. You can buy new emoticon packs from popular Korean webtoons or Kpop artists or theme packs to customize your chats. 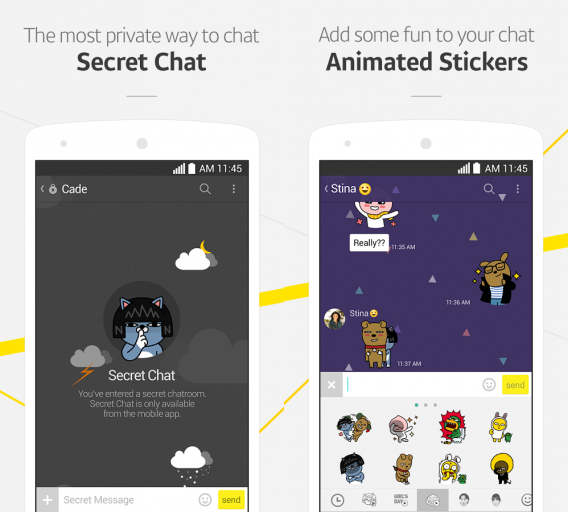 KakaoTalk supports group chat with an “unlimited” number of people. If you talk with a lot of friends on KakaoTalk, you can install KakaoTalk for PC. There is also the option to have “Secret Chats” with friends if you want.

Google replaced it’s default Android messaging app earlier this year with Hangouts, angering many Android users because of the fact that SMS conversations and Hangout chats from the same contact weren’t syncing in the same convo. It’s since been replaced by a separate Messages app in Android 5.0 Lollipop for those who don’t want to mix SMS with Hangouts messages. Despite this annoying bug, Hangouts is still a great messaging app. 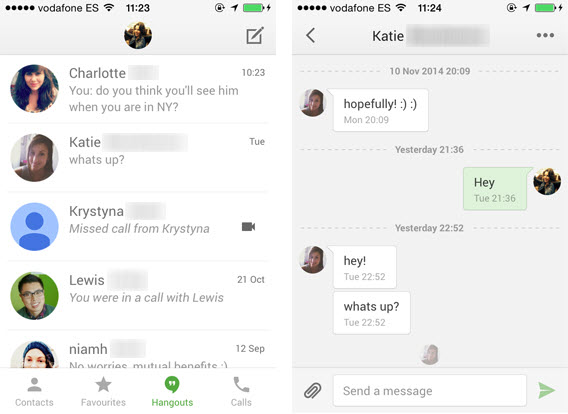 Its got video chat with up to 10 people, syncs with the browser app in Gmail, and similar to Facebook Messenger, benefits from syncing your Gmail contacts so that you don’t have to manually look for or add people to chat with. Interestingly though, there are a few key missing features in the mobile app, including the draw feature, and “invisible” status.

Kik comes off as a standard messaging app at first glance, but it’s got more than meets the eye.

Kik’s unique feature is the fact that for a mobile-first messaging app, it doesn’t require a phone number to register or use; simply sign up with an email address and username. You can then search for others using their usernames. Aside from the standard chat features, it’s got Kik Cards, optional features which let you play games, make sketches, send YouTube videos, and share sounds from SoundCloud, all without leaving the app. It also promotes itself as the first messenger with a built-in browser, giving it a bit of an edge if you’re looking for an all-in-one app. Like Viber though, it’s among the least secure options for messaging. 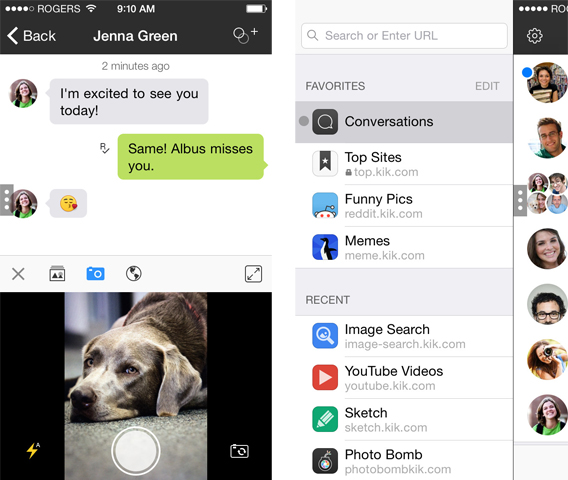 At the end of the day, most of these messaging apps perform the same functions. It all comes down to whether or not you want additional features, functionality on desktop, and most importantly, how many of your friends are using the service.

In theory, it’d be nice to have one messaging app to use with everyone. In reality though, I use at least 5 of these messaging services on a regular basis to communicate with different friends, and more than marking one as better than the other, I think they’re all pretty useful in their own way.