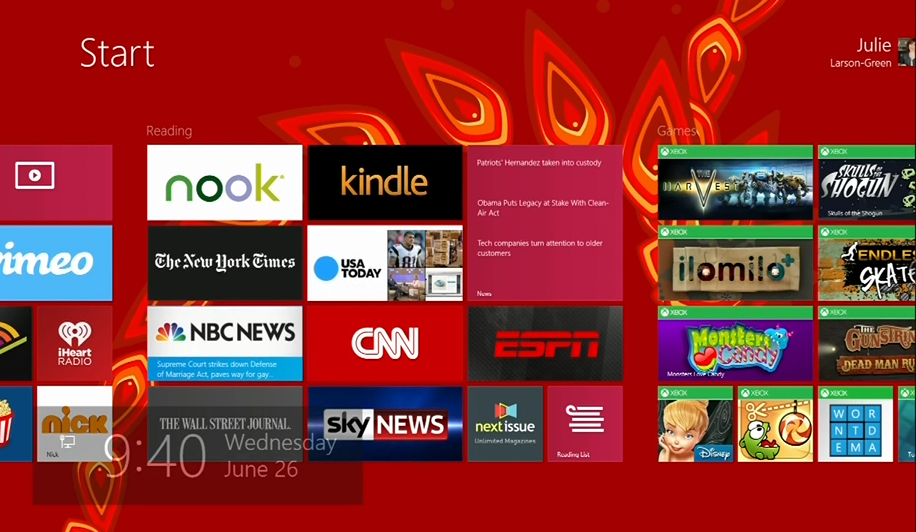 The Build 2013 conference kicked off yesterday, showcasing the capabilities of Windows 8.1 across PCs and tablets, and cohesion with Windows phones and even Xbox One. Many of Windows 8.1’s changes were teased last month, but Microsoft finally presented these features in motion. As promised, the Start button makes a return, along with new apps and integration with Bing. Microsoft also showed how Windows 8.1 is more developer-friendly and will help consumers find new apps. The announcement coincides with the beta preview of Microsoft 8.1, which contains most of what will be in the full retail version.

You can now boot straight to the desktop instead of the Start Screen. This is great, as the Windows 8.1 Desktop contains the most requested feature, the Start Button. It doesn’t open a compact menu like on Windows 7, but instead simply links to the Start Screen. Visually, this can look quite good if you set the same background on both interfaces, as Live Tiles will then appear to float onto the Desktop, instead of transitioning to a completely new menu. This is somewhat of an illusion; technically you are switching UI, it just makes it less noticeable. 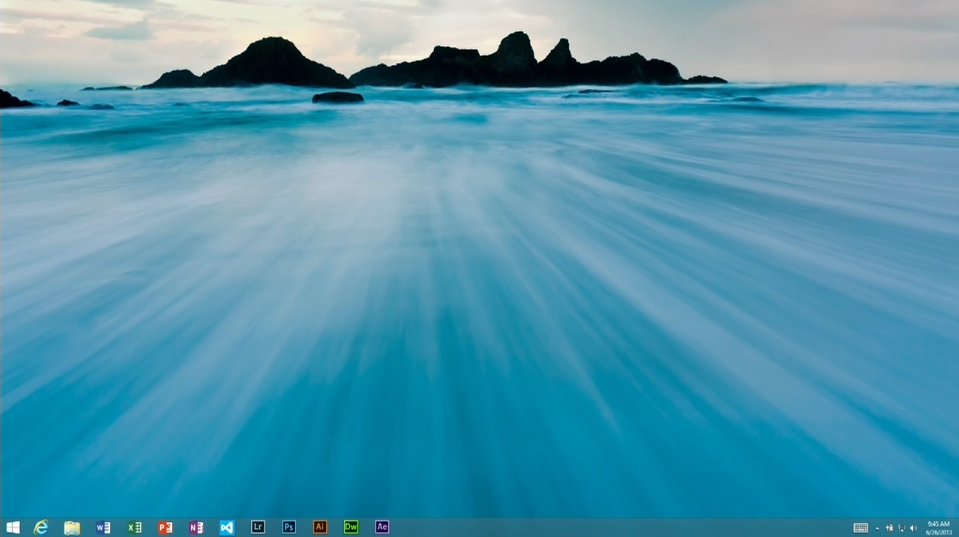 As mentioned, you can set the Start Screen background. While we prefer matching the Start Screen and Desktop backgrounds, there is a multitude of choice. There are even dynamic moving backgrounds that animate as you scroll across the interface. The Windows 8.1 preview doesn’t include all the ones shown during Build 2013 (most noticeably absent is the red dragon), but there is enough to play around with. In all, the Start Screen is much more customizable.

The Start Screen also has new tile sizes, extra large and extra small. Extra large is four times the size of normal size tiles, which makes it great for apps that constantly update with new data, such as weather or email. Extra small, on the other hand is one fourth the size of normal tiles, which is better suited for apps that are easily grouped, such as Office or media editing suites. It’s harder to move Live Tiles, as you need to press and hold on touchscreens and right click with a mouse. This works well to prevent accidentally moving tiles around, which was a major problem in the original Windows 8. 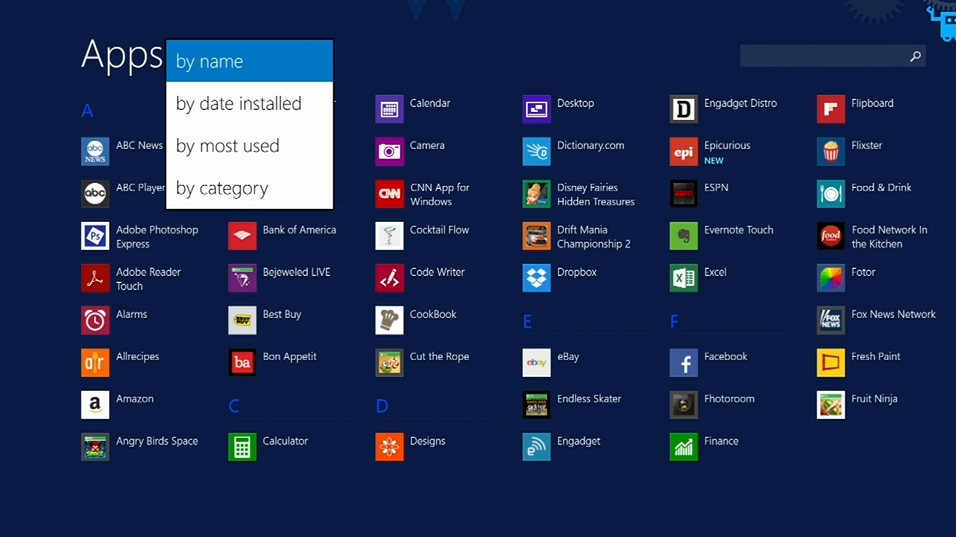 It’s now easier to organize apps by quickly accessing the All Apps view right from the desktop. While the view itself isn’t new, it has new functions to allow sorting by category, date installed, most used, and alphabetically. This makes it much faster to find the specific app you’re looking for, but thankfully you can also use this view to quickly pin apps to the Start Screen. All it takes is right clicking/holding an app and selecting the pin option. Even more conveniently, you can pin multiple apps in one go. 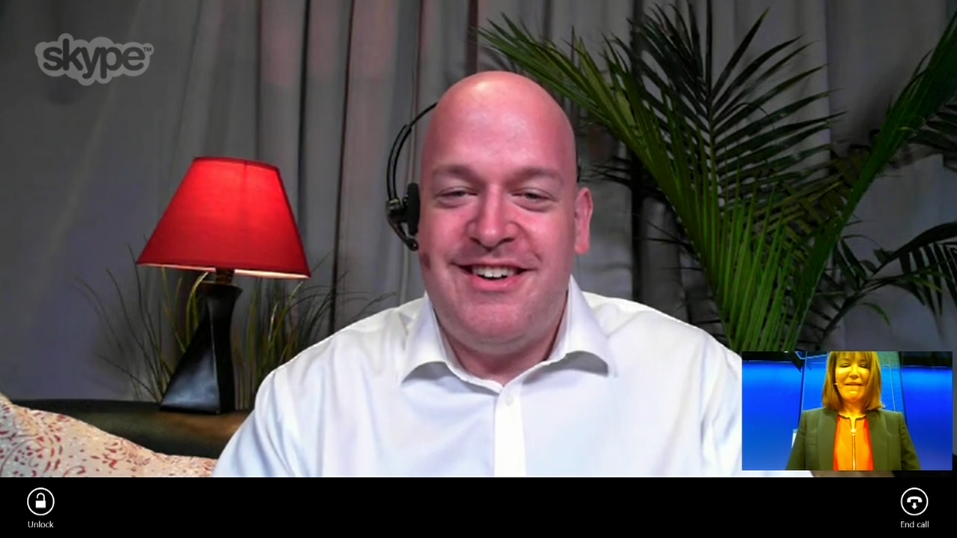 The lock screen has been improved for Windows 8.1, allowing greater functionality when not logged in. You can accept Skype calls right from the Lock Screen and can even take pictures. Unfortunately, you can’t open the photo library, so there’s no way to browse and edit photos you just snapped. You will however get a slideshow of photos from your device and on SkyDrive. 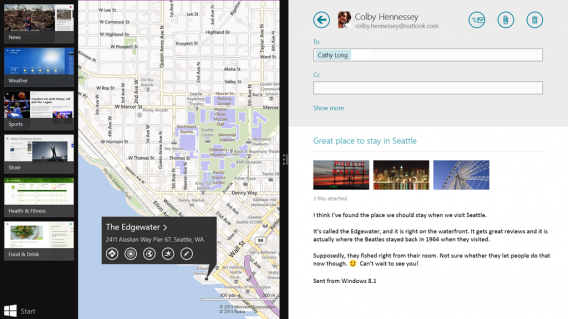 Windows 8.1 has a greater focus on the use of snap views. Previously, apps had a skewed 70/30 split, with emphasis always on one. In the Windows 8.1 preview, you can now set an even 50/50 view. You can also freely adjust this ratio, and on bigger monitors you can snap multiple apps together. 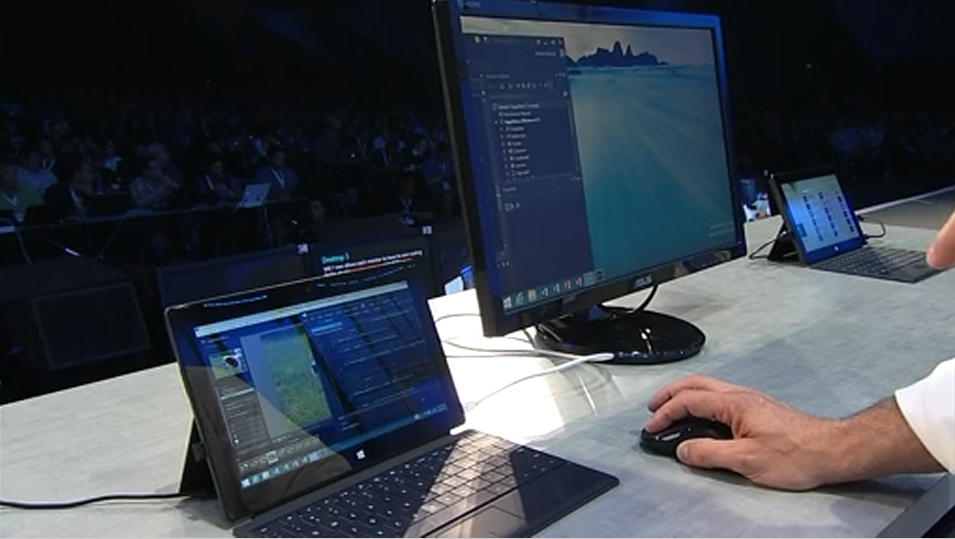 Moving apps across multiple screens has also been improved, including snapping apps to each screen. The Start Screen moves to the active monitor, which can make it a tad confusing when sorting. There is also Miracast functionality, which allows projecting your screen onto other compatible devices. This sounds like a wonderful idea when you want to get a larger view, especially for meetings and other presentations.

Thanks to closer integration with Bing, search goes a lot deeper than just files and settings. You can type right in the Start Screen to quickly conduct web searches, display files, system settings, apps, and additional information. Searching for musicians will quickly link to songs on Xbox Music or search your local collection.

A great new feature is Bing Heroes, which displays in-depth information about popular people. This includes files, links, images, and videos on the web and on your own machine. There is also relevant news and links to data from Wikipedia. Bing Heroes are aggregated by Microsoft, so you might not be able to find pages about the people and subjects you search for if they are too obscure. 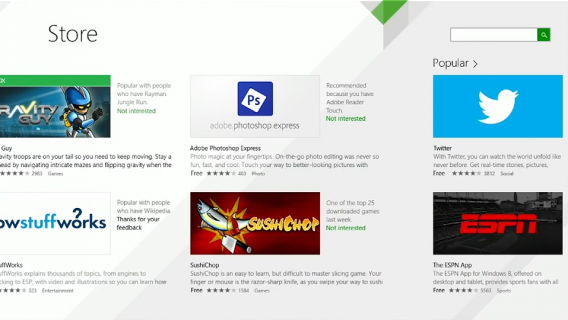 The Windows Store has been updated with detailed app listings and larger tiles. It’s faster and easier to find top apps, the best free apps, and better recommendations. Related apps are even displayed on download pages. Microsoft promises that this will help consumers discover the latest and best apps released by developers.

The apps included in Windows 8.1 have been updated too. Among the ones showcased at Build 2013 included the new Outlook mail app, Bing Food and Drink, and a redesigned Xbox Music. However, even more apps will be bundled in Windows 8.1. 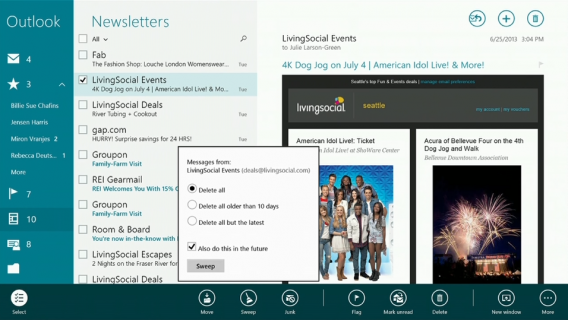 While the Mail map isn’t ready for the Windows 8.1 preview build, Microsoft showed it off extensively at Build 2013. One of the most striking features is the ability to “sweep away” emails, deleting large groups of spam in one swoop. You can sort through social mails and newsletters, and there are lots of drop and drag functions. The preview build doesn’t have these features, but they will appear in the final retail version. 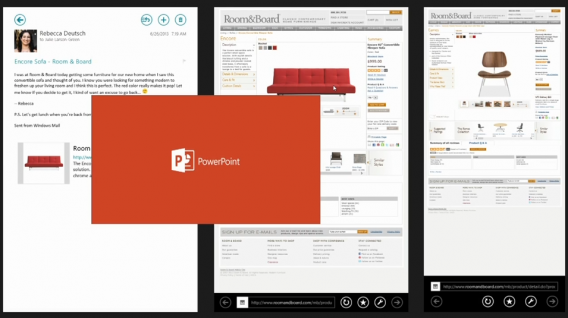 Speaking of teases, Microsoft showed off the Modern PowerPoint for Windows 8.1 tablets. It’s currently in alpha so there is very little information about how it will function. Microsoft will be showing more on Office 365 later in the conference, which might be a good time to highlight the rest of the suite. Otherwise, PowerPoint and the rest of Office will be bundled with Windows 8.1 tablets. 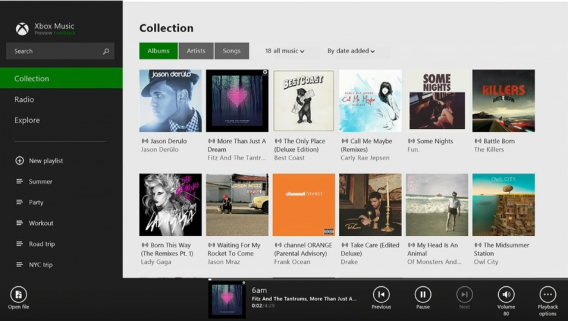 The redesigned Xbox Music app has a new layout that focuses on music listening, rather than discovery. It’s easier to quickly find your albums and music. A great new feature is the ability to use the Share charm on websites with musical artists, which in turn populates a playlist in Xbox Music. Xbox Music now includes a radio, which allows you to recommend music even to non-subscribers. This makes Xbox Music even more competitive when compared with music streaming radios like Spotify. 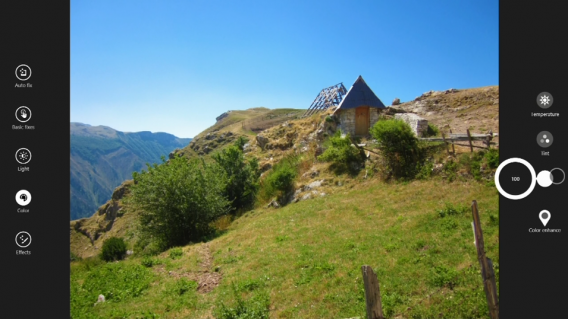 The Camera app now has a new function dubbed Photosynth, which allows you to take larger pictures by moving your tablet around an area and scanning what’s nearby. The photo app has new circular controls to change the level of saturation and other editing tools. 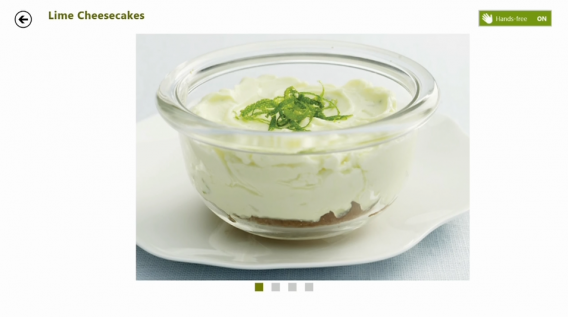 The Bing Food and Drink app can help you find recipes, make a shopping list, and plan out meals. Designed with tablets in mind, the app includes a hands-free mode to keep your device clean while cooking. Instead of touching, you instead control menus via webcam.

Lastly, Internet Explorer 11 might look like IE 10, but has several new features. In the update, browser tabs are moved near the bottom, right by the address bar. You can have unlimited tabs, allowing IE to catch up with the rest of its competitors. Tabs can also sync between Windows 8.1 and Windows Phone for swift access across devices. IE 11 also has a reading list that will allow viewing bookmarks at a later time.

While these are the highlighted apps bundled and showcased so far, there are plenty more planned and coming. There are Modern-style apps for calculator, alarms, and sound recorder, for example. The Windows 8.1 maps app will have a 3D view to help it compete with Apple and Google’s similar features. Facebook and Flipboard also have plans to create Modern interface apps for their services. 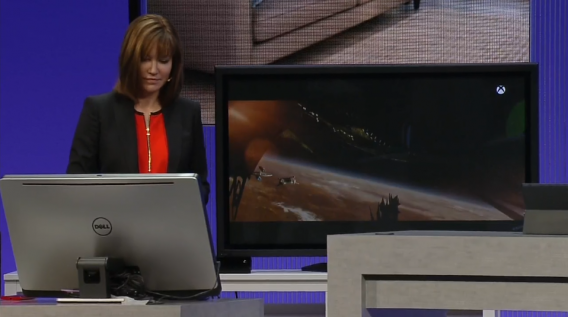 Microsoft showed off more Windows 8.1 capabilities at Build 2013, though since we aren’t developers, not all of it was completely relevant or functional. That said, we really liked the idea of Windows 8.1 being a great space for developers on both Windows and Xbox One. We also would love to try out syncing videos to Xbox One when the console is released.

It’s nice that Microsoft has listened to consumers and made changes to their latest operating system. It still seems clear that Windows 8.1 focuses on tablets and touchscreens, though the keyboard isn’t completely abandoned. Returning features such as the Start Button are minor tweaks, and it’s unlikely to sway the current nay-sayers. Those still on Windows 7 (or XP or Vista) probably won’t be sufficiently excited about the improvements to upgrade to Windows 8.1. For now, though, it’s worth it to check out the beta preview and test all of its functions.

Check back as we continue to cover the news from Microsoft’s Build 2013 conference.