Epic fails in Zoom and other Videoconferencing Apps 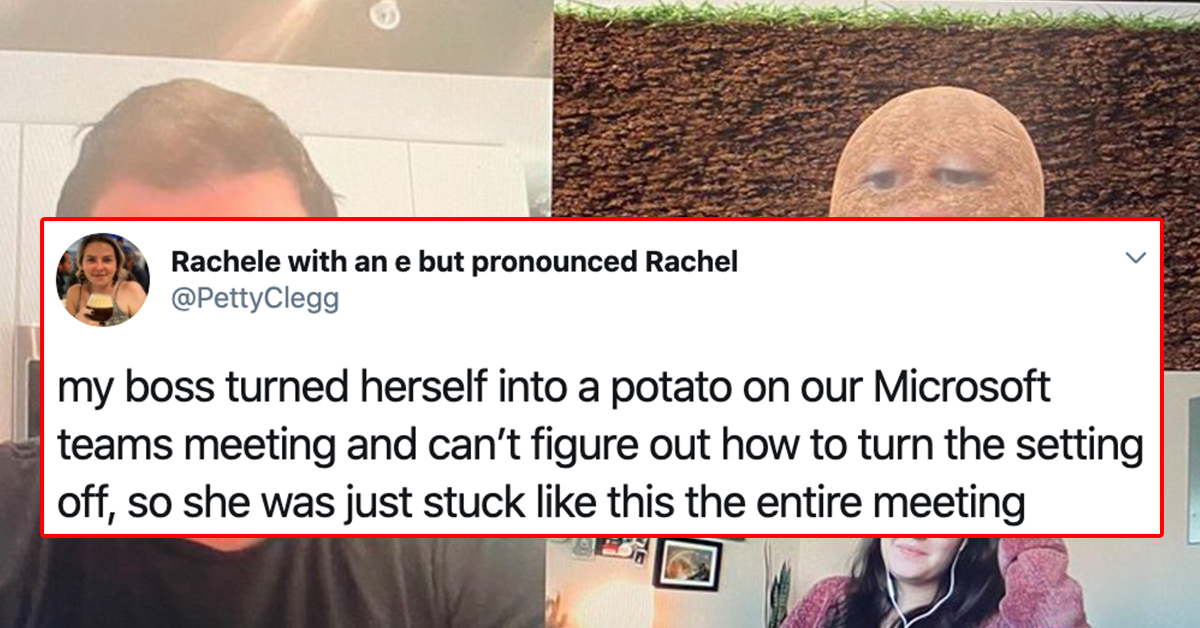 Videoconferencing has been our bread and butter over the past few months. We’ve used it to call our parents, tell our partner we love them, take online classes, and discuss the new business plan at work… but wait! Why is our boss suddenly a potato? And who’s that stranger who snuck into the conference with the camera on while he was in the bathroom? These and many other bizarre, embarrassing, and hilarious situations have occurred during lockdown when videoconferencing was our window to the outside world.

In today’s article we’re going to have some fun reminiscing about some of the most epic fails of the star app of the season, Zoom, as well as other videoconferencing applications. Ready for a few laughs? Take a seat and buckle up!

1.- Honey, Zoom turned my boss into a potato 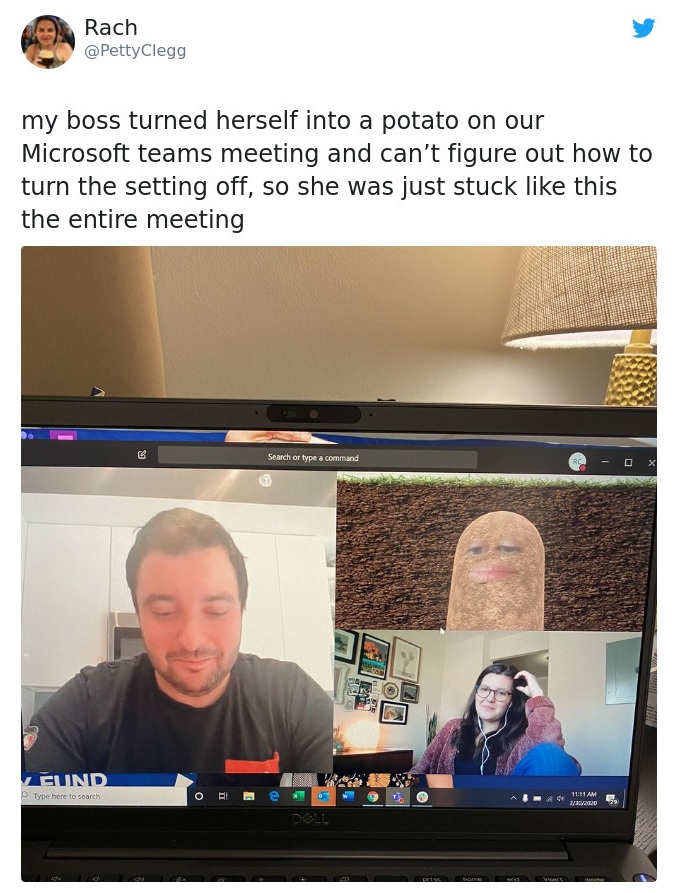 Imagine you’re in the middle of a business meeting and your boss turns into…a potato! And the worst thing is that she doesn’t know how to turn off the filter and you have to endure the entire meeting with a tater giving you orders without being able to laugh. Well, that’s what happened to Rachele Clegg (@PettyClegg). A meeting that will be hard to forget. 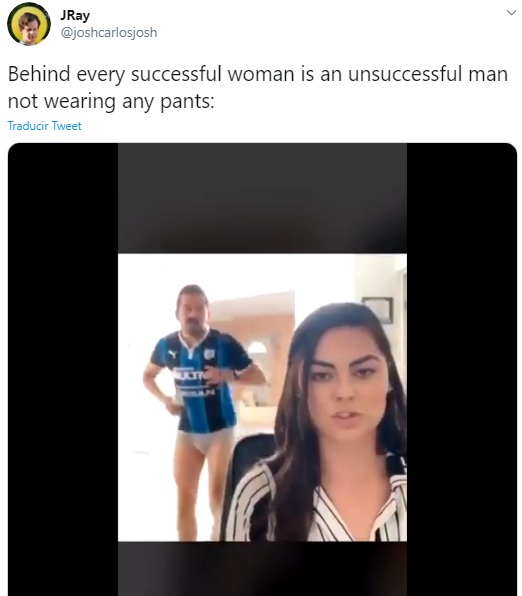 This poor woman’s work videoconference seemed to be going smoothly until her partner decided to walk around in his underwear behind her. Although the poor woman tries to act normal in the end she breaks down. It’s always a good idea to put clothes on at home, just in case. You can see the video by clicking here.

3.- The councilman and his noisy visit to the men’s room

At an extraordinary plenary session to discuss safety measures for coronavirus, a councilman decided to leave his computer to go to the bathroom. So far, so good. Unfortunately, the mayor forgot to turn off his mic, so the whole plenary heard the long trickle as he relieved himself. Obviously, the rest of the plenary session attendees had a hard time keeping a straight face.

4.- Working from home with kids, always a joy

Due to the COVID-19 crisis and lockdown, much of the planet has had to switch to working from home. Singles or couples without children haven’t had much trouble working peacefully, but what happens to parents now that children can’t go to school? Poor Jenna Weiss-Berman was surprised in the middle of a videoconference by her son yelling “Look at my penis!” and making farting noises. A fantastic way to look in front of your boss.

5.- Videoconferences are for pets too 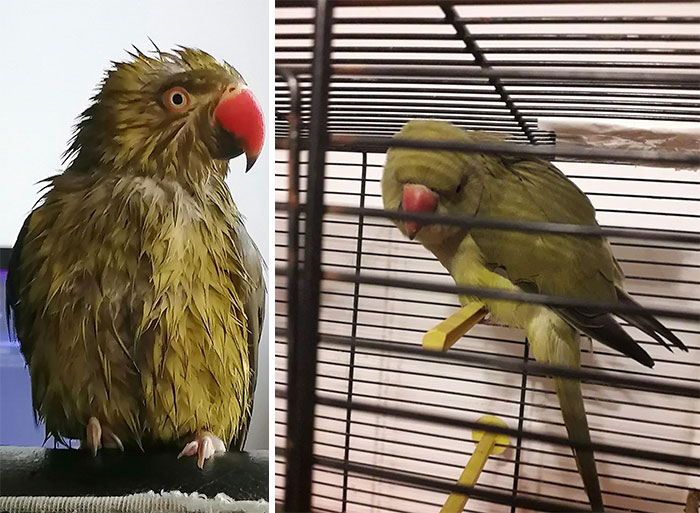 The Reddit user TcpAckFrequency comments in a post how in his Zoom classes, the teacher asks students not to use their cameras. That’s why one day this young man decided to take a nap leaving the videoconference on thinking he’d get out of class. What TcpAckFrequency didn’t take into account is that he forgot to turn off his computer’s microphone and that his pet, a talkative parrot, was in the same room. While the young man was catching up on his sleep, the parrot kept up a constant stream of conversation during the videoconference. The teacher didn’t know how to kick him out of class so they spent the morning trying to negotiate with the parrot. As TcpAckFrequency explains, a classmate told him the parrot spent the entire class saying “Hello,” “What are you doing?,” and then obsessively repeating “OK” to anything anyone said. 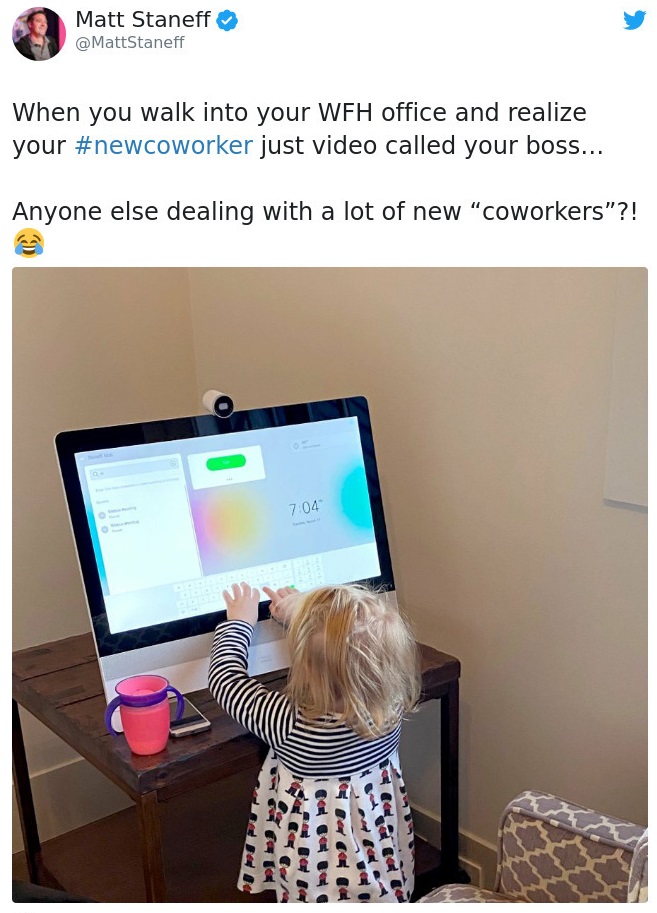 You’re used to working from home, you may even have a little corner at home emulating your office, and everything seems to be fine, but do you know where your kid is? Matt Staneff tells us from Twitter how one day he walked into his small workspace and found his young daughter videoconferencing his boss. We’re sure they discussed important business.

7.- We know talking to cats is relaxing, but make sure your mic’s off

Daniel Taroy tells on his Twitter account how in the middle of a 68-person Zoom meeting he started talking to his cat, unaware he had left his microphone on. He only suspected something was up when people started laughing and mentioning the cat. Kill me now!

8.- Never suggest class is boring with your mic on 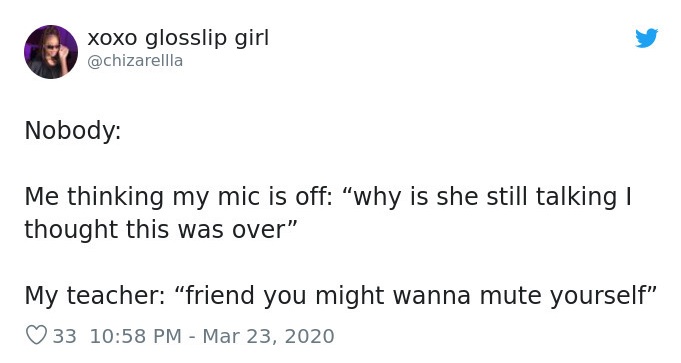 Here’s another Zoom blooper where the culprit is once again an open mic. On this occasion Twitter user xoxo glosslip girl explains that, tired with her Zoom class going over, she said to herself “Why is she still talking? I thought this was over.” To her surprise her mic was on and the teacher didn’t miss a beat, sarcastically responding, “Friend, you might want to mute yourself.” She probably won’t get great grades this quarter, although we hope we’re wrong. 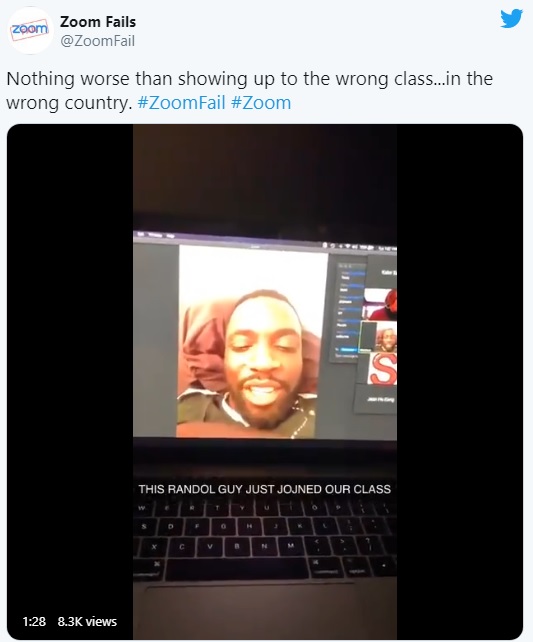 There’s only one thing more embarrassing than crashing a Zoom class by mistake: if it isn’t even from your country! That’s what happened to Randol, a young man who doesn’t know how he got into a meeting that wasn’t his. Fortunately, the teacher was sympathetic to the young man’s plight and even thanked him for coming. You can see the video by clicking here. 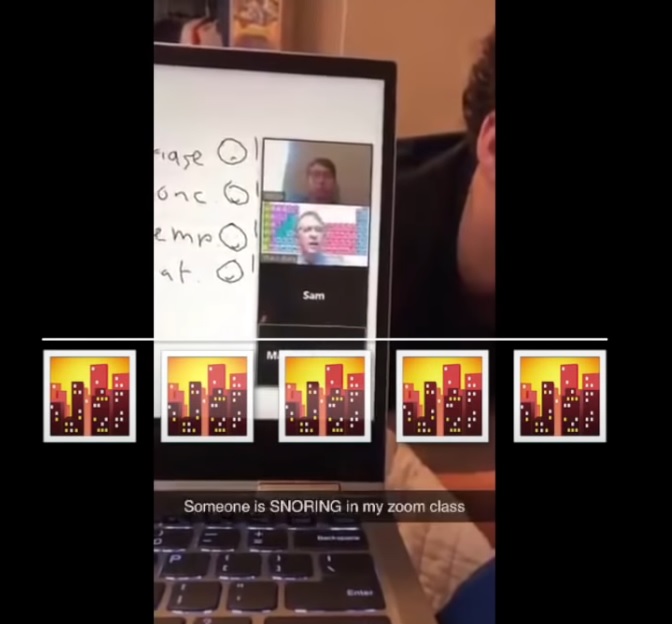 Another to add to the long list of Zoom epic fails from leaving the mic on in the middle of a meeting, or in this case, of a chemistry masterclass. A student fell asleep in the middle of his teacher’s videoconference and the whole class could hear him snoring. So now you know, if you go to sleep during a class over Zoom, you need to turn off the camera and also mute the mic.

11.- Never take your laptop into the bathroom with you with the camera on

In the middle of a Zoom meeting, a girl got the urge to go and took her laptop right into the bathroom with her. That way she won’t miss anything and no one will ever be the wiser – or will they? The fact is that the young woman not only left the mic on but also forgot to turn off the laptop’s camera while she was answering the call of nature. And worst of all, not only do her Zoom buddies know about it, but so does the rest of the world thanks to the magic of the internet and social media.

12.- Smoking in the middle of class is never a good idea 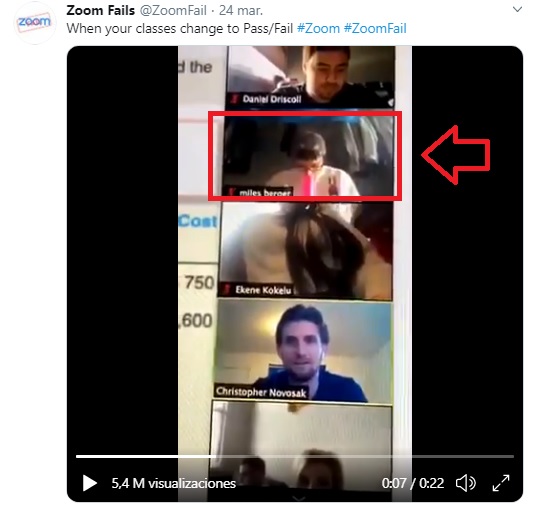 Miles Berger thought his class that day was so boring that he could only get through it if he was high as a kite. The young man went right ahead and decided to start smoking marijuana in front of his teacher as if there was nothing unusual about it. Fortunately, the teacher took it with good humor.

13.- Never roll a joint with the camera on 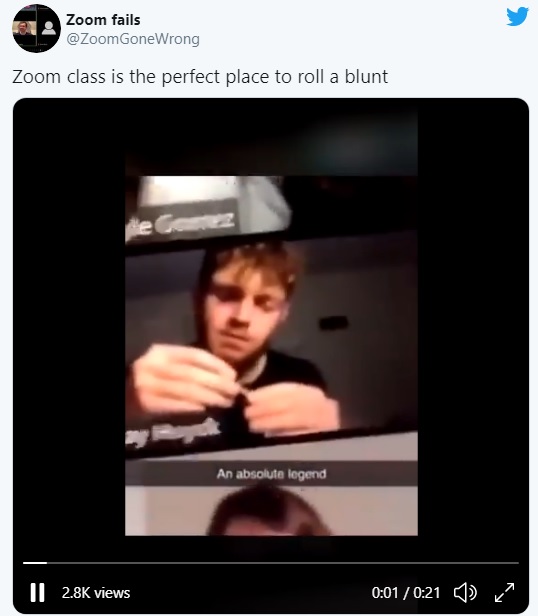 We continue with the fails of students who just can’t get through class on Zoom without the help of some kind of mind-altering drug. In this case, the young Jay Huyck decides to go ahead and roll a joint to truly comprehend the concepts taught in class. Too bad he completely forgot to turn off his camera. You can see the video by clicking here.

14.- Have you ever had that nightmare where you’re in class in nothing but your underwear? 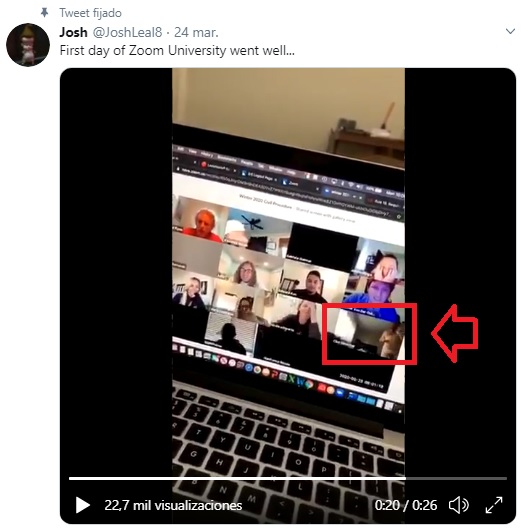 We’ve all had that terrible dream that we’re naked or can’t find our shoes or some other essential article of clothing in class. This is exactly what happened to the kid in the next video. He unknowingly had the camera on in the middle of a Zoom call and was completely naked and showing off his attributes not only to the teacher but to the rest of his classmates.

15.- A class with a built-in soundtrack 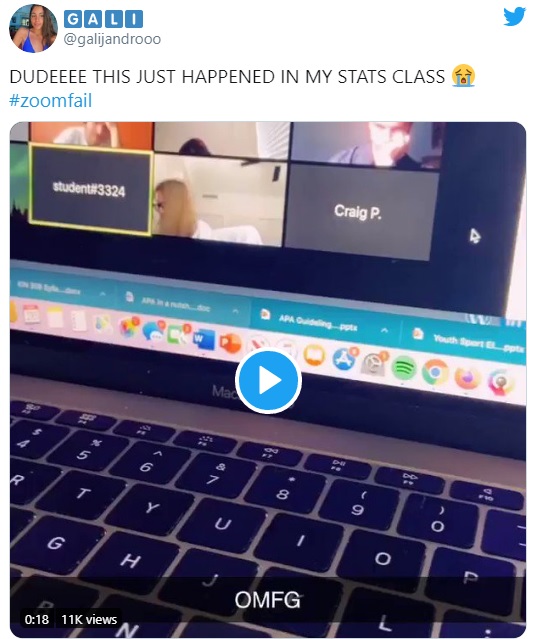 The class clown starts to perform his own rap ballad in the middle of a Zoom videoconference, thinking that no one will be able to hear him. Yeah, you guessed it. Again, the mic plays the part of trickster: everyone ended up listening to the song and laughing at it. You can see the video by clicking here. 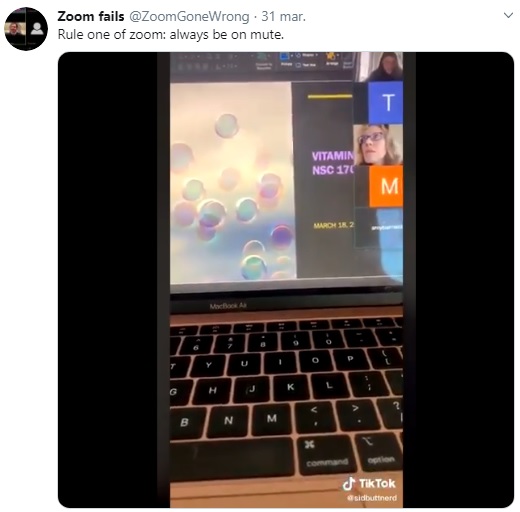 We all know that lockdown has sparked conflict between couples who are not used to spending 24 hours together. In fact, it is estimated that this pandemic has exponentially increased the number of divorces and break-ups around the world. This is exactly what happened to the couple in the video, except that they break up in the middle of a Zoom class and forget to turn off their mic. The attitude of the teacher begging them to mute the microphone is truly priceless. You can see the video by clicking here.

We hope our selection of Zoom and other epic app fails has made you laugh. Did you videoconference into classes or meetings during lockdown? Did anything funny happen in any of them? Tell us your experience and if you’ve had any Zoom fails or zoombombing!