Microsoft gave a brief preview of its upcoming touch version of Office at its BUILD conference today. Only PowerPoint was shown, featuring gesture controls and OneDrive integration.

Office for touch uses the same “ribbon” interface we’ve grown accustomed to since Office 2007. Things have been simplified and made easier for touch. Inserting and manipulating photos is easy using touch gestures like pinch to zoom. 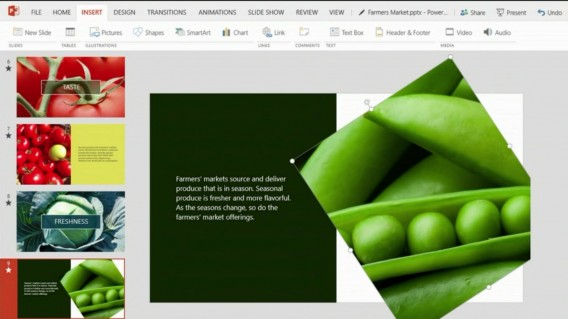 Word, PowerPoint, and Excel will be at the core of Office for touch, though the company may add apps down the line. OneNote for touch is already available in the Windows Store.

Office for touch was also shown working on Windows Phone 8.1, which means users can jump between mobile devices to keep working.

It’s strange that Microsoft debuted Office for iPad before coming out with a touch version for its own tablets. The company is invested in mobile and is concentrating on getting its Office products on as many platforms as possible.

There’s no word when Office for touch will launch.