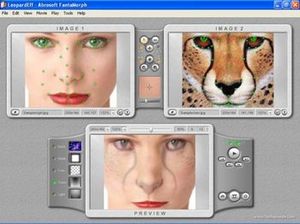 Remember that amazing morphing effect that made our jaws drop in Michael Jackson’s Black or White video clip? That was back in 1991 and graphic technologies have evolved a lot since then, but morphing animations still remain as an eye-catching effect you can now easily apply to your pictures with Abrosoft Fantamorph.

The program offers three trial versions (Standard, Professional and Deluxe), differing from each other in the amount of available tools and functions. We recommend trying the Deluxe one, although you can always select another in the Help – Choose Trial Edition menu if you change your mind.

Fantamorph stands out for its ease of use. Once you launch the program and pass the morphing capacity diagnosis test, a wizard leads you through the process of creating a morphing or warping effect. The first one creates a transition animation between two pictures, whilst the second one generates an animation based on a single picture. Both effects are worked out in a very similar way, so you’ll be mastering them in almost no time.

Morphing is based on dots that you place on the picture to point out the exact areas the program will use to create the animation effect. So for example, to create a morphing effect between two close-ups, you add dots around the face, eyes, nose and so on, creating a dotted outline of the source image and arranging these same dots to coincide with the face, eyes, nose and everything else in the target image. So, the more dots you have, the more realistic your effect will look. Fantamorph does a good job at managing these dots: you can add dots simultaneously to both photos, move them around easily, lay a grid over the image for improved accuracy or even zoom in the picture. However, the zoom tool makes it a pain to move around the image as the working area is pretty small and cannot be resized. The same objection can be pointed out about the interface’s buttons, which are too small to be comfortable. Luckily enough, you can count on tooltips to reveal their function. 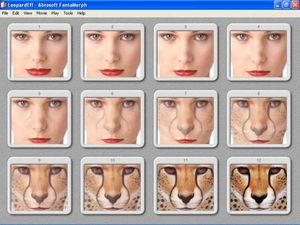 For those of you who feel too lazy to start adding dots, Fantamorph includes an amazing tool called Face Locator which, as its name clearly states, is able to find the face area in any picture you want to use. This comes in very handy when you want to create a face morphing effect as it gets most of the work done for you.

In case the morphing and warping effects are not enough, the program features a wide range of effects you apply to your pictures, such as background images, masks, music or transition effects. You can select them through the wizard or from the program’s interface, and see how they look like in the preview window. When your project is finished, you can export it as an AVI video, an image sequence, a webpage or even a screensaver, amongst others.

In short, if you want to create an appealing morphing effect in a surprisingly easy way, Fantamorph is definitely the application you’re looking for.