We’ve all marveled at how we can drive up our street on the web or on a phone using Google Street View. But what if you could take a look around the inside of buildings as well as the outside? According to Nokia, this new window on the world may not be that far away.

Following this week’s announcement that Nokia’s Ovi Maps app has garnered more than three million downloads, we caught up with Christof Hellmis, Vice President, Product Location, Services at the Mobile World Congress, who revealed Ovi’s plans for mapping the World – both outdoors and indoors.

Hellmis pointed out that since Nokia bought mapping company Naviteq in 2008, the company has ramped up its efforts to give Ovi users a more immersive experience. Having since introduced 3D and augmented reality features into Ovi, Hellmis is ready for the next stage of mobile navigation.

When we launched our 3D maps platform we didn’t see it as a new chapter in the development of the product, but rather a new book with a clean, white first page. We saw the context of the service as moving to 3D from a flat map, and it was for this reason we acquired Navteq. The company has 100,000 dollars worth of equipment for laser-based point clocks, which can accurately capture images of streets and buildings. This is scalable upwards, so we will be able to get more and more detailed 3D images of buildings to include within Ovi Maps.

Now, the benefit of having such high standards of image capturing is that this (interior mapping) will be do-able if dealt with properly. Nokia has already done research into indoor mapping and we need to decide on the best way to make it scale. I can see a time when public places of interest, such as shopping malls will be mapped and available on Ovi. This would open up a new dimension in advertising, because vendors would be able to push messages to people as they walked past their store. Indoor mapping could also be useful for museums and general places of interest.

The prospects for offering fully realized, 3D indoor maps look genuine, and Navteq told us at MWC that it already has buggies armed with camera equipment that it has used to capture and map the inside of hotels and conference centers. It’s clear that shopping centers would be an advertizers dream if they could be plotted and mapped, allowing shops and vendors to push ads to the user’s phone as they enter a mall or walk past a store. 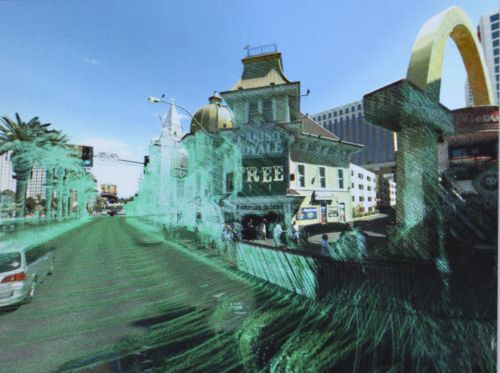 In fact, Navteq is already making moves into this area. The company announced a deal this week to enable its LocationPoint Advertizing service in the Nobex Radio Companion. This will allow companies to send targeted advertizing to listeners of Nobex Radio services on Blackberry devices. This means that when a user is walking or driving within range of an advertizer’s retail location they will be fed with rich graphical promotions and mobile coupons inviting them to come on in.

This kind of business model could well drive immersive indoor mapping of shopping centers. The likelihood is that, in turn, demand will see these buggies driving into museums, hotels, casinos, sports arenas, airports, and any other kind of public building. This can only be a good thing for anyone wanting to explore the world on their mobile. I just hope they stay away from my house.