Disclosure: Softonic could receive financial compensation when you click on or buy one of the products mentioned in this article

Surely you have heard of Raid: Shadow Legends, the popular RPG for mobile devices. Well, now you can officially play this game on your computer too through the Plarium Play platform. But is this version worth it? We can already tell you it is! Here are 10 reasons why you should download this incredible adventure now.

1. Better graphics on your PC

Want to play Raid on the big screen at home to enjoy its amazing graphics? You can play Raid: Shadow Legends on your PC without the need for rare or lagging emulators: the game is now officially available for PC and Mac through Plarium Play, a program from its developer. Plarium Play is completely free and can also be used to try other great games.

More good news: Raid for PC has had a graphic overhaul, gaining HD textures for both environments and characters, new animations, terrain effects, a higher frame rate… And all this is fully customizable, so you don’t have to worry about it using too much computer power.

2. Play it anywhere you want

Tired of the PC version and want to keep playing while lying in bed or on the sofa? No problem! Your Shadow Legends game is synced across all your devices. The game adapts to your pace and lifestyle.

3. High-quality role playing on your PC and mobile device

In case you’re unfamiliar with this game, here’s some background. Raid: Shadow Legends is an online RPG that was originally released for iPhone and Android. Since its inception, it has been right up there with the best console games. Spectacular graphics, fast-paced action, a complex plot full of twists and betrayals, a brainy, tactical combat system… and it’s all free!

For starters, you have the campaign, which consists of four difficulty modes (Normal, Hard, Brutal, Nightmare) and 12 levels. In turn, each level consists of seven stages. It is here that you’ll enjoy Raid’s great storyline and begin to understand its combat system.

But finishing the campaign is just the beginning. Then you have to overcome 10 dungeons with tough final bosses that require a lot of tactics and strategy to be defeated. It doesn’t end here: check out the arena for player vs. player battles, faction wars, weekly challenges… Are you ready for this mega-challenge?

If you’re a collector, get ready, because Raid: Shadow Legends has more than 300 Champions spanning various factions and tribes. They are your fighters. They make up your army against the forces of evil. Without them, victory is impossible.

There are four types of Champions: Attack, Defense, Health Point and Support. Each name indicates the attribute that will be developed the fastest when you train your fighters. However, that doesn’t mean a Defense Champion necessarily has to play a defensive role in combat. Since Raid is flexible, you can personalize each Champion however you wish. There are more than one million potential configurations. 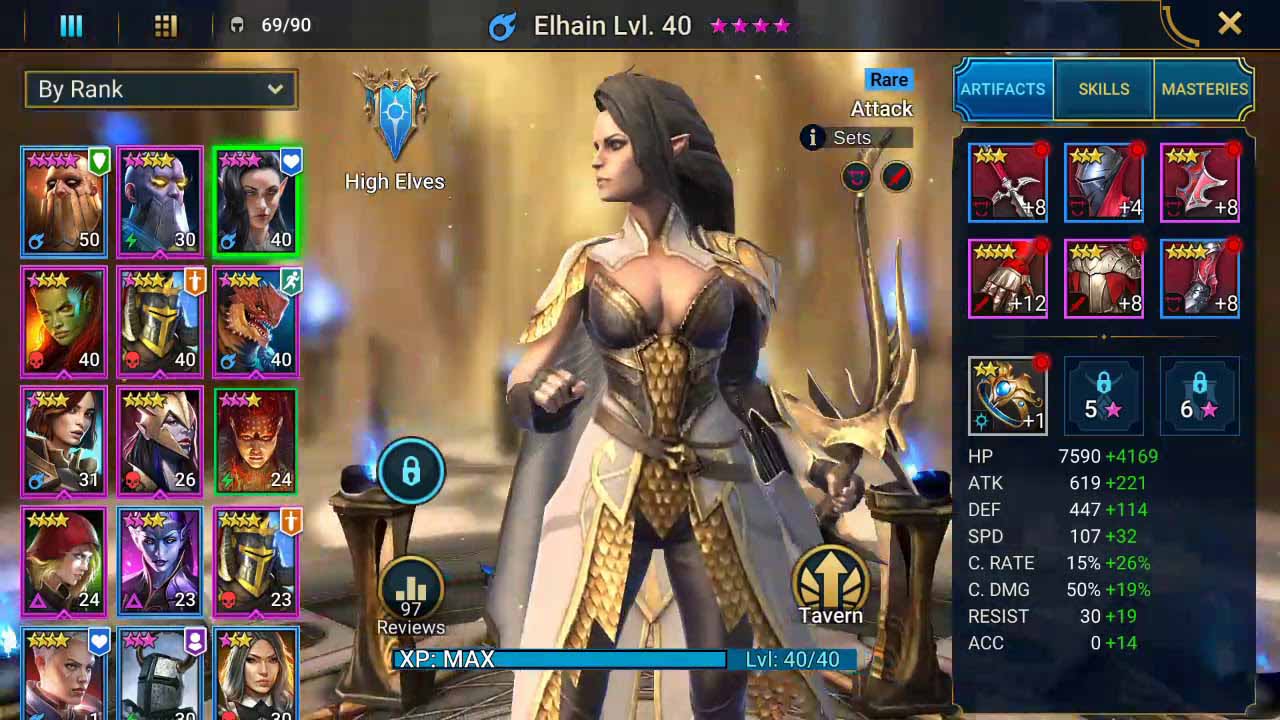 With so many possibilities, your job will be discovering how to best leverage your Champions’ abilities at every moment. Do you have what it takes?

6. An addictive and complex combat system

If Pokémon came to mind when reading the above section about collecting Champions, you’re on the right track! The battle system in Raid: Shadow Legends is based on the timeless concept of “rock-paper-scissors.”

Each Champion has an Affinity. And each Affinity is strong against another Affinity, and weak against a third Affinity. Let us explain:

So your first mission is to memorize this rock-paper-scissors system and incorporate it into your strategies. It’s your key to victory. 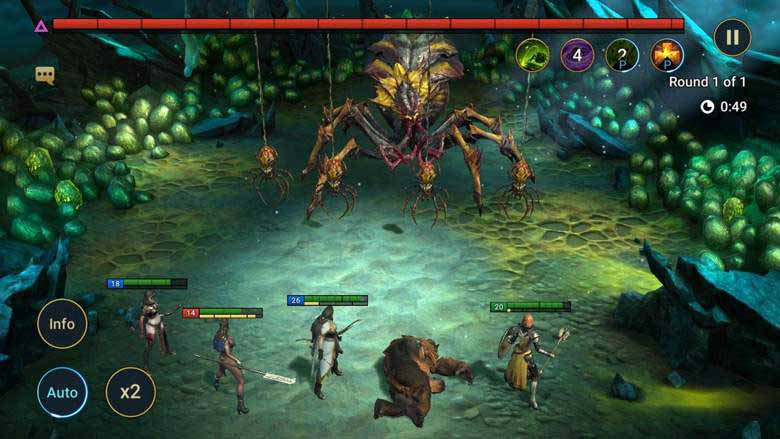 But that’s not all! In Raid, it’s very important to understand the system of buffs and debuffs. You have to learn how to leverage the attacks, defensive maneuvers and speed of your Champions and how to weaken your enemies or alter their state with poison, for example.

Luckily, combat in Raid is turn-based, so you can take as much time as you need to decide your next attack.

7. Attack at your own pace

Like any good role-playing game, farming is the core of Raid. You’ll repeat dungeons or challenges to train your Champions, to acquire Shards… If you think your next farming battles will be incredibly easy, just turn on “auto” mode. Your Champions will attack on their own, without your help, and you can continue watching that Netflix series you’re hooked on, or go have lunch or something.

Is the next battle too difficult for your Champions’ AI? No problem, just go back to manual mode and start micromanaging them.

8. All kinds of resources for newbies

Feeling overwhelmed by so many new concepts? Not to worry. Raid: Shadow Legends provides tons of resources to help newbies to quickly learn its systems and feel at home.

For starters, the narrative tutorial not only introduces you to the world of Raid through a movie, but also teaches you little by little how to fight. Since collecting 300 Champions may seem daunting at first, at the end of the tutorial, Raid will invite you to choose just four: Athel and her cool Area of ​​Effect ability; the incredibly fast Galek; Kael the Dark Elf and his poisonous abilities; or Elhain and her critical attack skills. No matter who you select, your Champion will be good enough to get you out of trouble at the beginning. 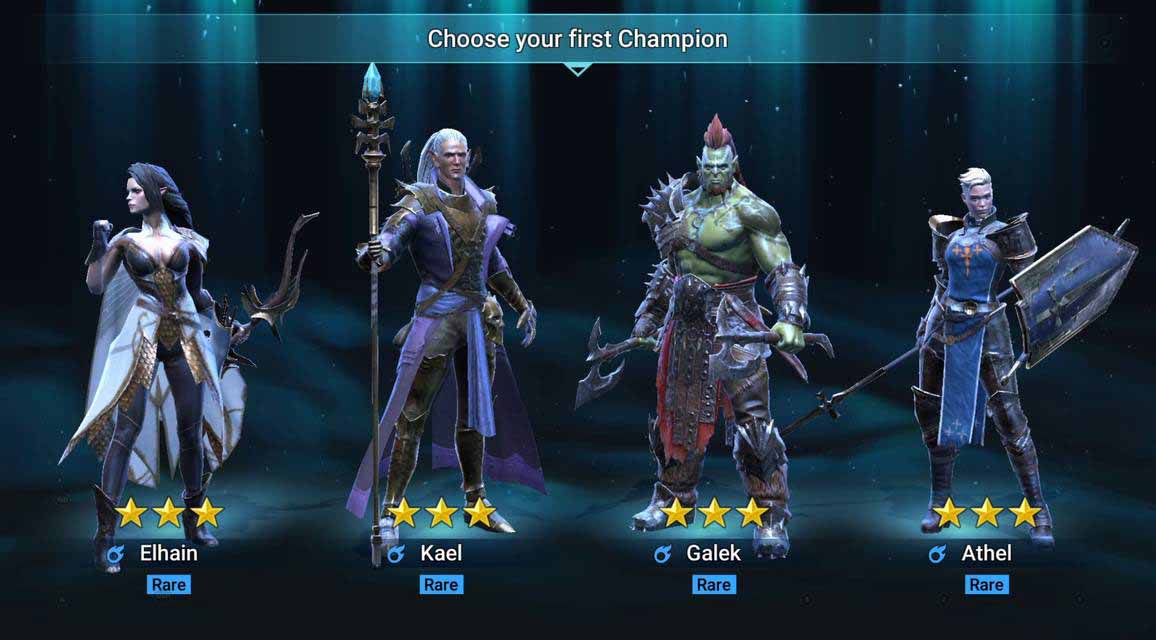 9. Conquer evil without paying a penny

Although you always have the option of stopping by the virtual store, Raid will constantly reward you for your achievements, so you don’t have to worry about money. Finishing weekly challenges, completing campaign challenges, killing clan bosses, overcoming new levels… Almost everything you do will get you Champions, Shards to summon them, a squad… That said, you’ll have to invest a LOT of acumen to get to the top of the ranking.

10. Other adventures await you

Another reason to download Plarium Games on your PC is that the platform provides access to other free-to-play games of the same quality as Raid. For example, you can play the strategy game Stormfall: Age of War or the addictive Vikings.

What do Glow Berries do in Minecraft?