Can’t wait to see the first photos of Kate and Will’s little bundle of joy? There’s a Royal Baby app for that.

The countdown is almost over as the world anticipates the birth of a new prince or princess due to make its first appearance in a matter of days, and the Royal Obsession wouldn’t be 21st-century proof without an app to commemorate the little one’s arrival. 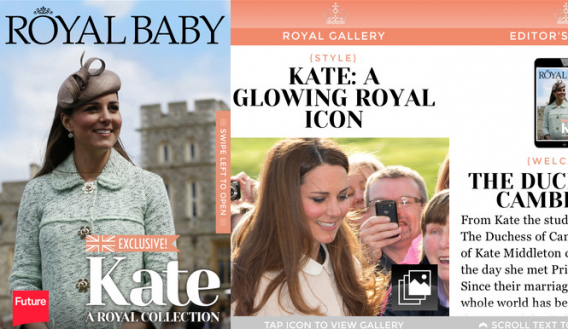 azine publisher Future does just that with its Royal Baby app for iPhone and iPad, aiming to give the most timely photos, news and updates of the newborn baby and happy parents. The magazine-style app is free but gives the option to purchase sections with more detailed information like feature stories, royal births throughout the years, and highlights of the proud grandparents.

Future hopes to capitalize on the amount of news coverage that the newest addition to the royal family will surely receive by putting all the photo and news updates in one place. As the baby reaches those milestone moments, so too will Future expand the app to commemorate them- first steps, first public appearance- the Royal Baby app for iOS hopes to track it all.