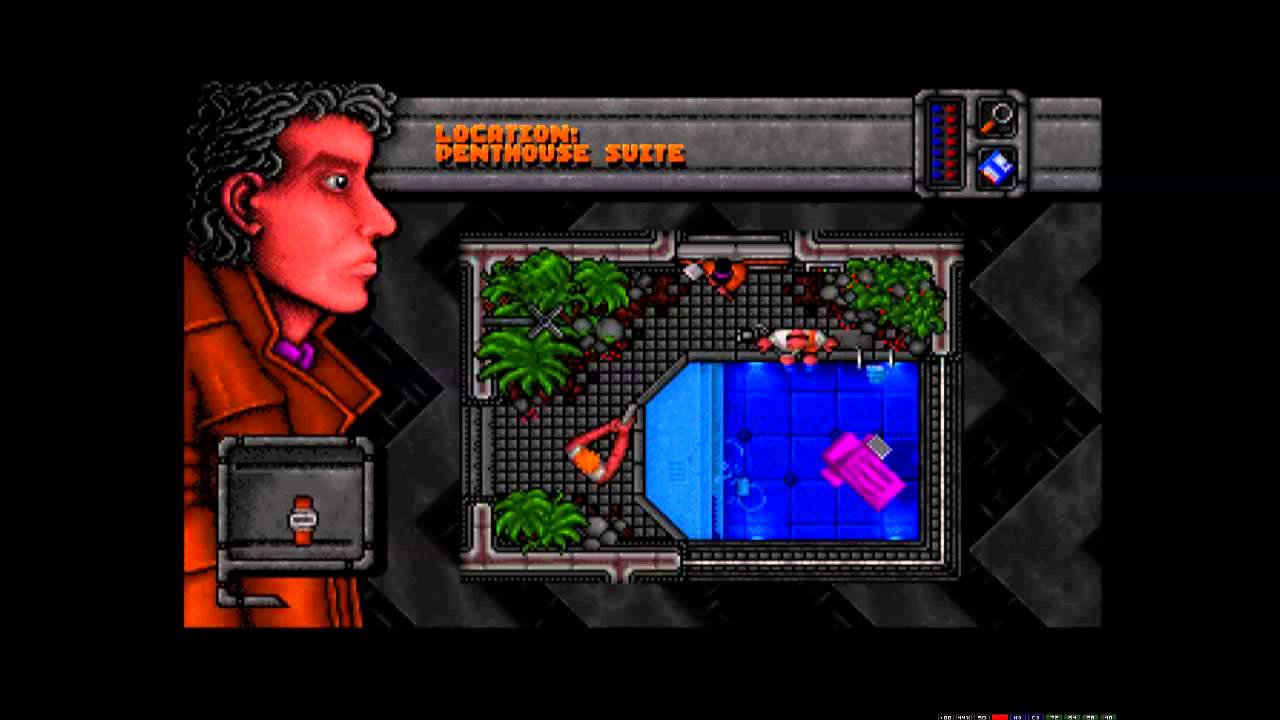 The Internet Archive is an extraordinary digital library where you can find free films, TV programs, books, audio files, and, of course, video games.

Over time, this page has collected a huge number of abandonware titles, creating a comprehensive repository where you can find a total of 6,979 completely free games. There’s so much that it’s impossible to get bored! 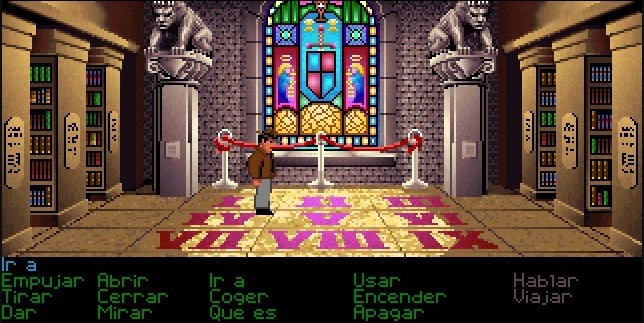 If you’ve been browsing the Internet Archive’s catalogue of games, you’re bound to have been overwhelmed. It’s hard to choose just one game from so many. To make your life easier, we’ve made a list of what we consider to be the best free-to-play retro games you can find on this awesome website. Ready to have some fun? These are the ones we like best!

What you need to play games in the Internet Archive

There are two ways to play any game in the Internet Archive. We’ll explain both step-by-step.

How to play from your browser

To play the Internet Archive’s games, you won’t need anything at all. In fact, you won’t even have to download them. Simply go to the catalogue (click here), click on the game you want to play and click on the green button at the top of the page. 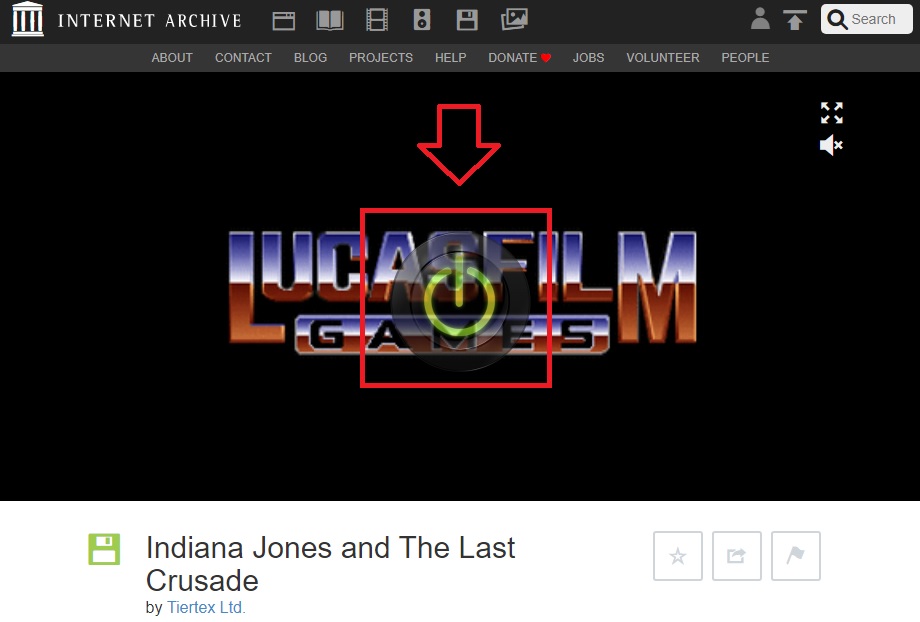 If everything works correctly, the DOSBox emulator will load in your browser and you’ll be able to play the game in just a few seconds.

How to play from your PC without an internet connection

If playing from your browser isn’t your favorite, don’t worry because you can also download the game and play from your computer without any connection.

First you need to download the DOSBox emulator. It’s completely free and offers excellent compatibility with any game that you would be unable to load today using Windows. You can download DOSBox quickly and safely right here below these lines.

Once you’ve installed DOSBox, you need to download the game to your computer. Open the video game you want to play and click on the file to download under the “Download Options” section. You can also click on the download icon we’ll include for all the games we’re going to analyze.

Once this is done, unzip the file on your computer and load it with DOSBox. Don’t have a program to decompress files? Don’t worry, here below you’ll find one of our favorites: WinRAR.

The best abandonware games from The Internet Archive 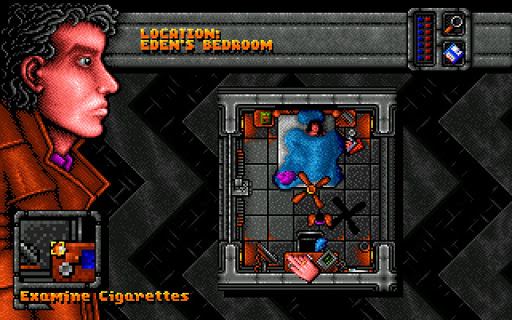 Released in the mid-90s, Dreamweb was a game that made waves. Its dark story, clearly inspired by Philip K. Dick’s short stories, and some of its violent and racy sequences got this title a “not suitable for minors” label slapped on it.

This adventure game with elements of action, adventure, and point-and-click takes you to a dystopian future where you play Ryan, a waiter who has strange nightmares. In them, some monks repeat over and over that he has been chosen to protect the Dreamweb, and to do so, he must kill all his enemies.

If you like complex games with lots of freedom and a dark story full of twists and turns, we recommend checking it out. You won’t be disappointed.

Eye of the Beholder III: Assault on Myth Drannor 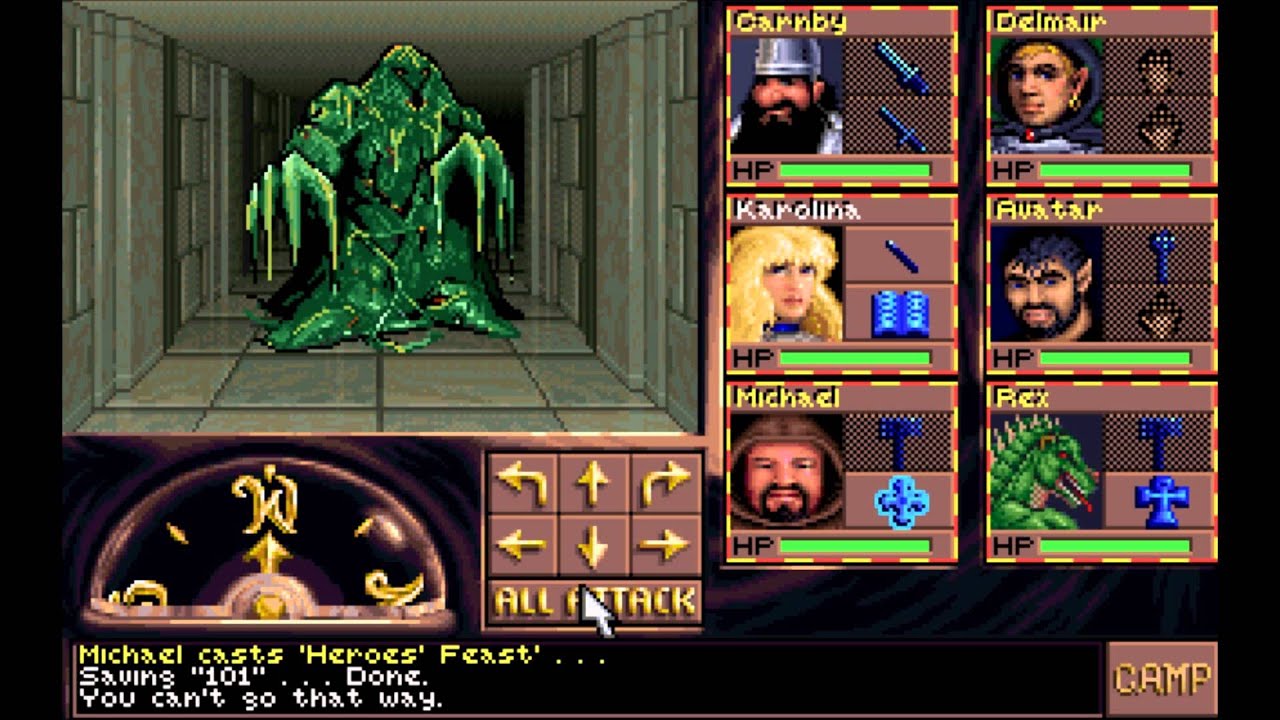 Eye of the Beholder is one of the best-known first-person role-playing game sagas in the world of video games. Its third installment, Assault on Myth Drannor, is its culmination, bringing together and improving the very best of the series.

Eye of the Beholder III: Assault on Myth Drannor immerses you in a challenging adventure where you have to face a hostile environment threatened by a terrible Lich. If you like Western role-playing games and you’re not afraid of some slightly outdated graphics, we wholeheartedly recommend playing this one. 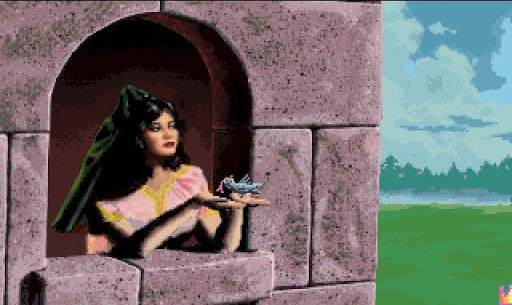 King’s Quest VI – Heir Today Gone Tomorrow is for many one of the best graphic adventures ever created and undoubtedly the crown jewel in the Daventry kings’ saga created by Roberta Williams.

Discover the kingdom of the Land of the Green Isles with Prince Alexander as he seeks the hand of Princess Cassima. Set in a world of fairytales and clearly influenced by One Thousand and One Nights, this is a must-play for point-and-click lovers. 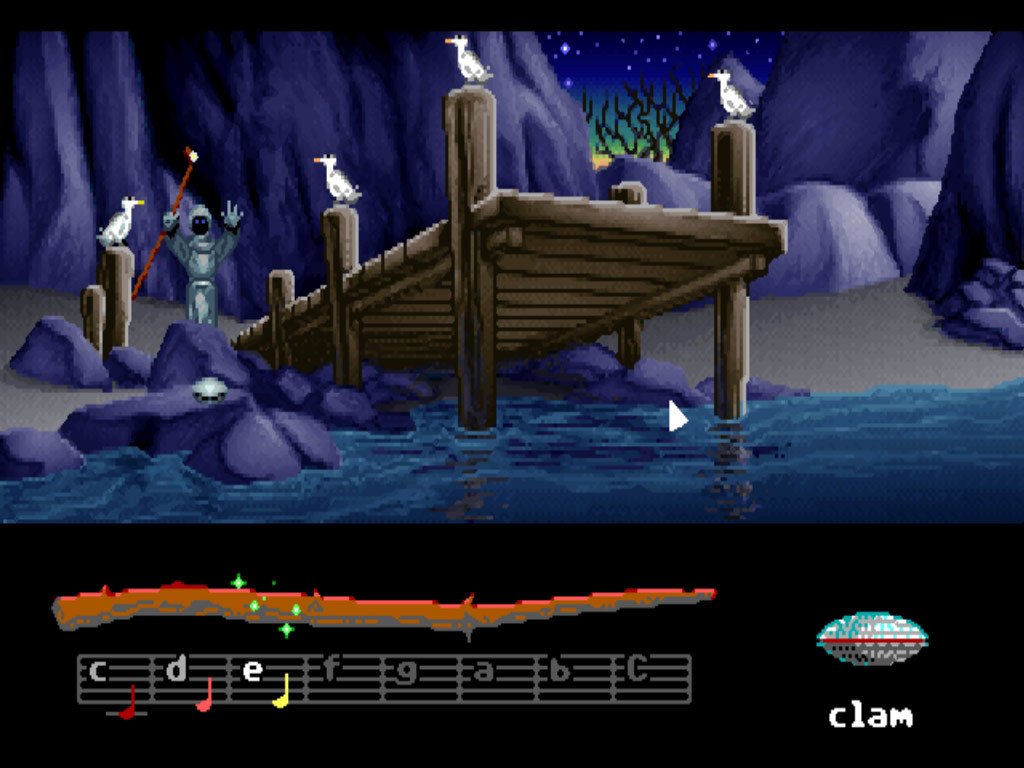 Loom is one of those little gems that was ahead of its time and  unfortunately was not very well understood when it was released. Under the guise of a point-and-click graphic adventure, Loom is a small work of art where the real star of the story is music.

Loom puts you in the role of Bobbin Threadbare, the last member of the Weavers’ Guild in search of his missing people. The game itself works by weaving spells using musical notes that end up telling a sad tale about the apocalypse. Essential if you love Tchaikovsky and especially Swan Lake. 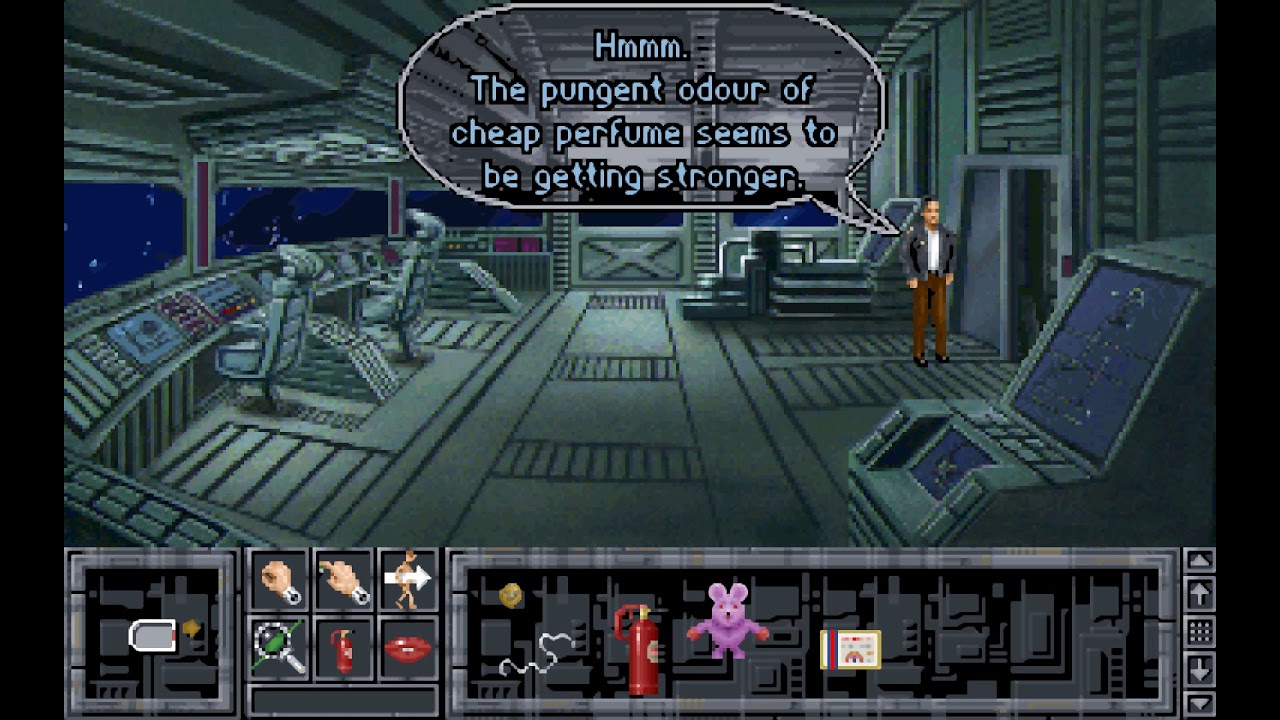 In the early 1990s, the galactic ruffian Jack T. Ladd, a dumbed-down Han Solo, and his point-and-click adventures hit our computers. Guilty is the second and last installment of his journeys and a good choice if you like graphic adventures with a touch of comedy.

In one major improvement over its first part, Guilty lets you choose between one of two main characters: the cheeky Jack or the police officer Ysanne. They have opposite personalities and offer two completely different gameplay paths, doubling the game’s fun and playability.

Indiana Jones and the Last Crusade 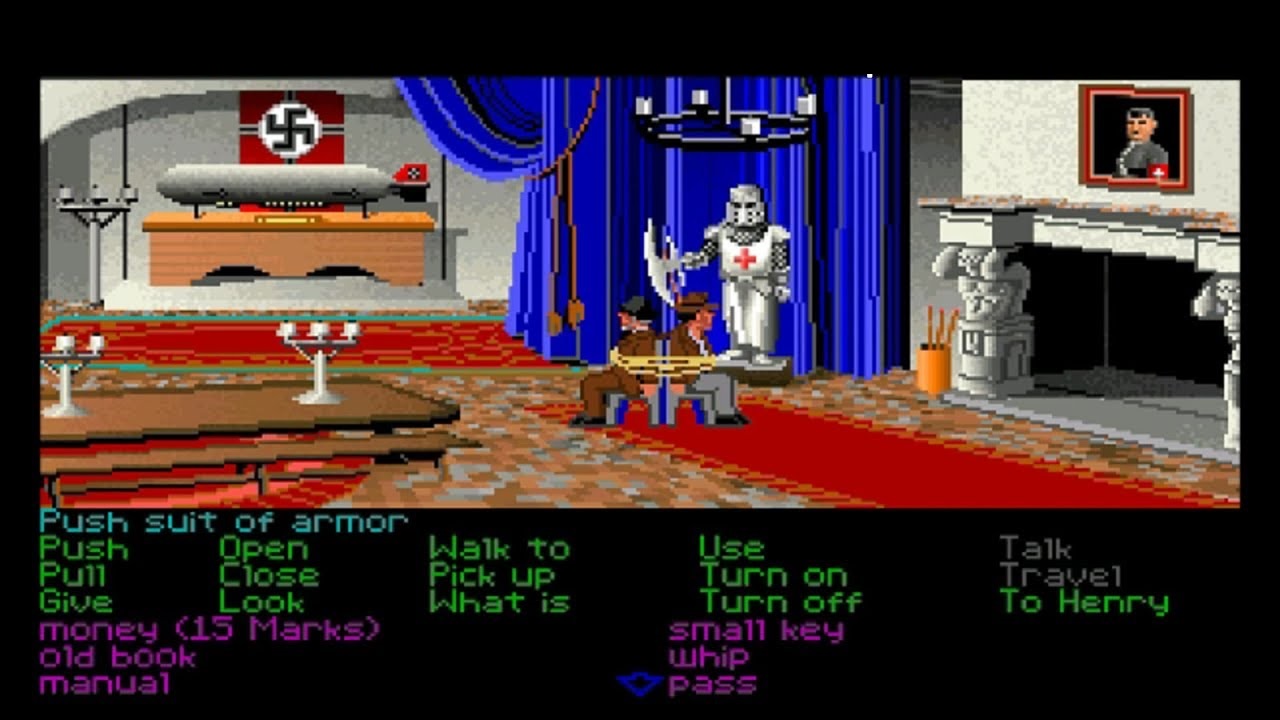 Fans of the adventures of the tireless soldier of fortune and archeologist Indiana Jones will love this Lucasfilm classic.

This point-and-click adventure is an almost exact adaptation of Dr. Jones’s third adventure. In it you can relive the same situations as in the film, or you can change the situations as you like. If you always wanted to rescue Elsa at the end of the movie, download this incredible game now! 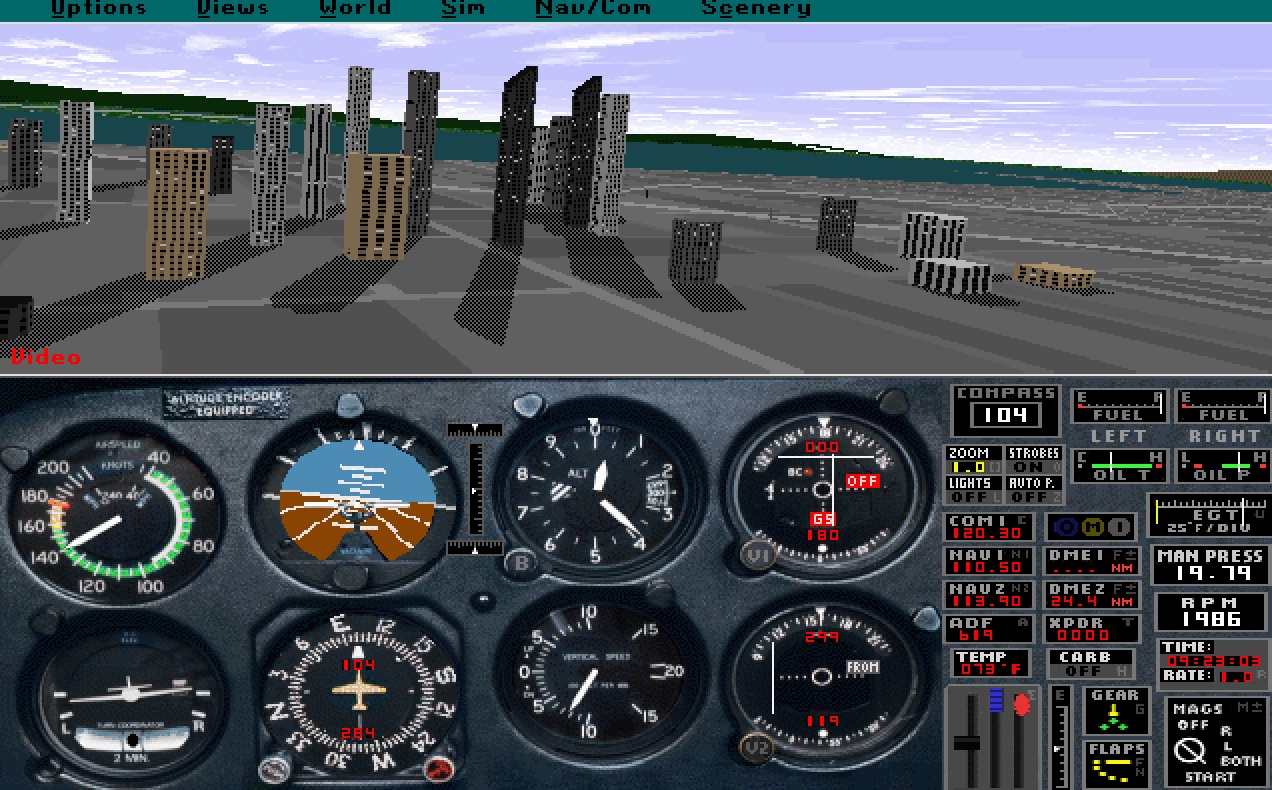 Are you a fan of flight simulators? Take Microsoft Flight Simulator for a spin. Although the game was released in 1993, it’s still one of the most fun games you can find on the market.

As usual with this genre, Microsoft Flight Simulator is a complex game. You’ll need to take a few flights (and crash a few planes) to get the hang of it. Once you are in the air you can relax, fly over cities like Paris or Munich and then face the real challenge: landing. Highly recommended for relaxing for a few minutes or taking a break from work. 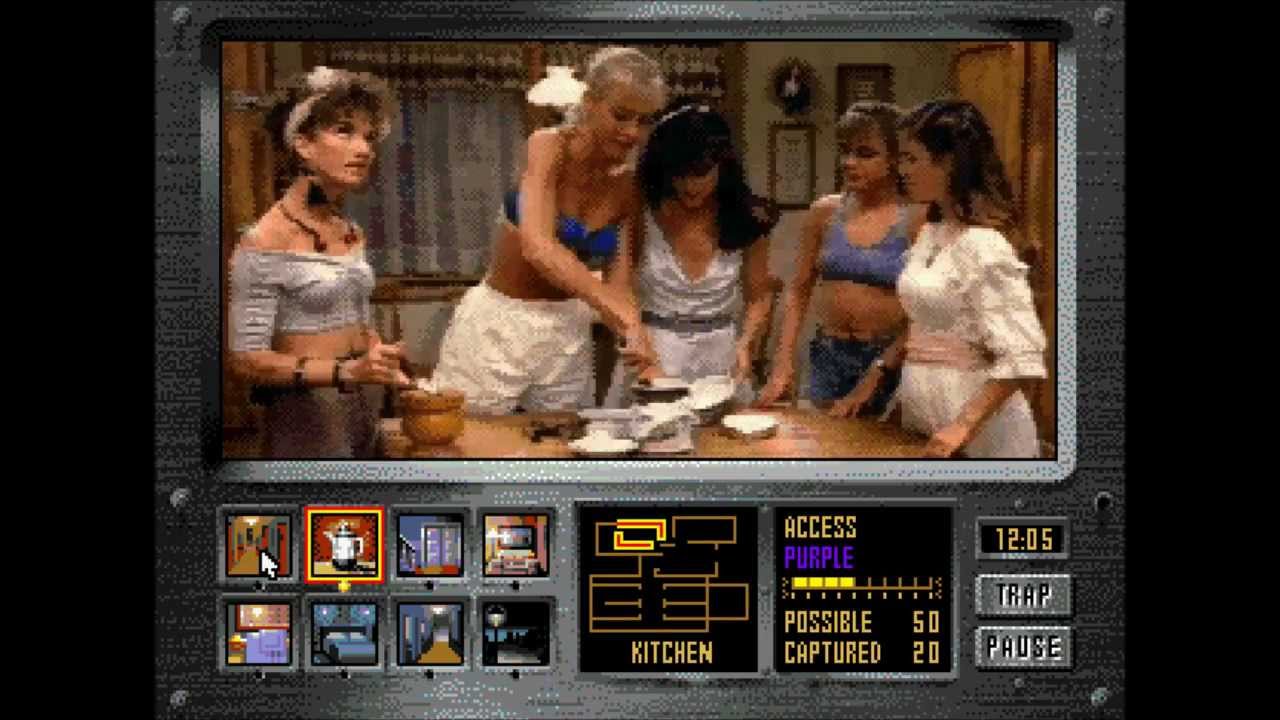 If you grew up in the 1990s, you might remember Night Trap, the revolutionary horror video game that required that device that not many of us had at the time: a CD-ROM drive. This is the first full game in FMV (Full Motion Video) that was rated as adult-only because of the guts and gore.

The premise of Night Trap may not be the best, but it was very original at the time. Five girls are going to spend their vacation at the Martins’ house, a place where other young women have previously disappeared. That’s why a surveillance team (the player) has been hired to protect the girls using a hidden camera system. You have to keep an eye on the house since it’s full of traps designed to ensnare the girls and use them to defeat the vampires that live there. 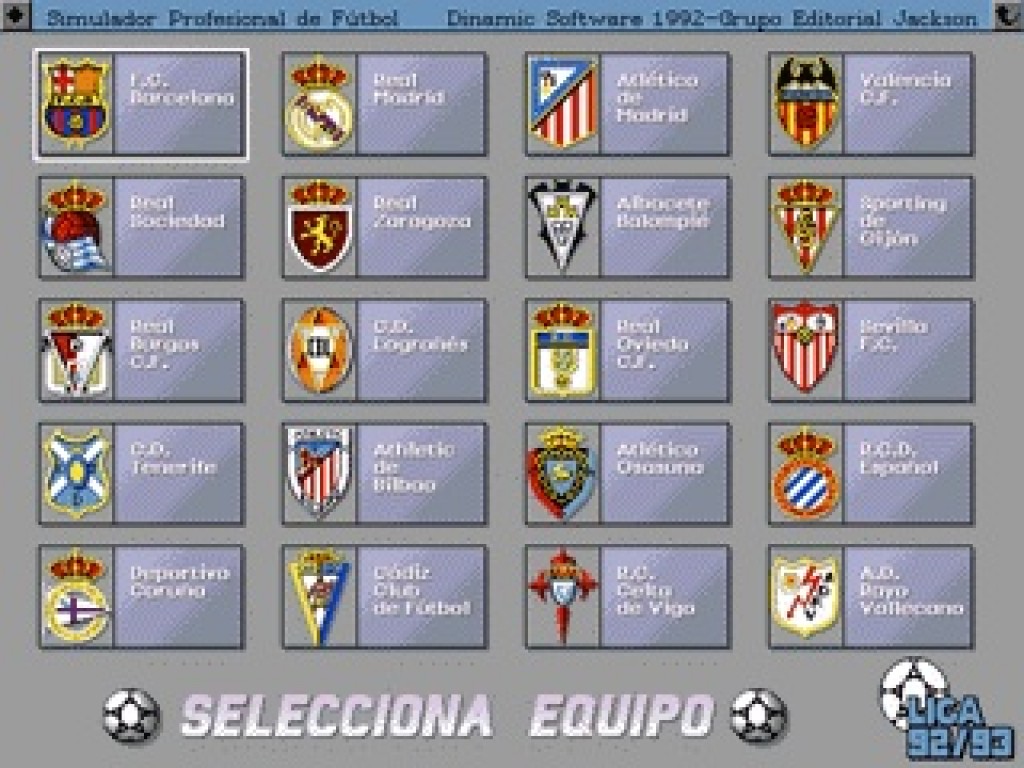 PC Fútbol was one of the first soccer management games to appear in Spain and also a revolution for the fans of video games of the sport. Backed by the sadly departed Michael Robinson, PC Fútbol is a classic you just have to play.

In terms of playability, PC Fútbol has everything a good sports game should have. You can buy your own club, sign players, create advertising campaigns… even decide how much tickets to the games will cost! But keep in mind that the game is from 1993, so don’t expect to see Messi, Neymar, or Cristiano in it. 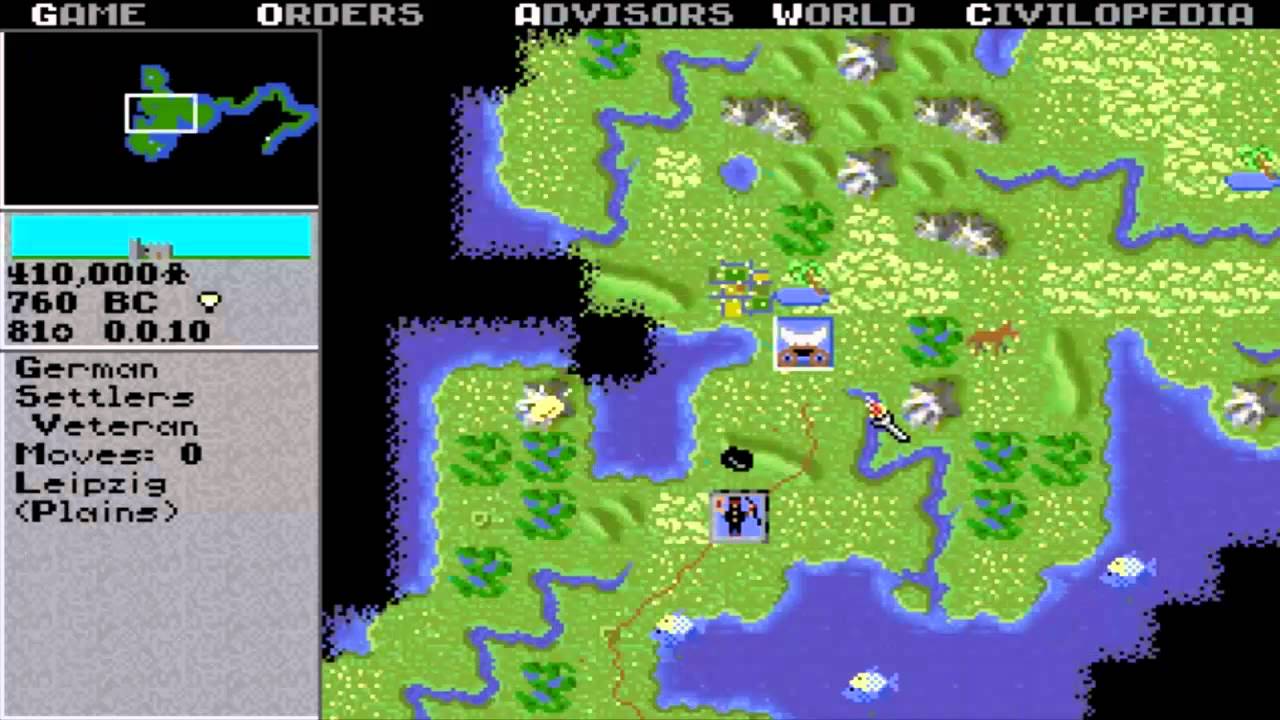 Civilization is in many people’s opinion the best strategy game saga ever created. Its complexity, fun, and evolution over the years have been applauded by critics and fans of the genre alike. You’re probably played at least one version, but have you ever played the original?

Sid Meier’s Civilization may seem at first glance to be a simple, graphically unappealing game, but rest assured that it is still one of the best strategy titles on the market today. In it, you’re the leader of a small tribe that you’ll have to guide through the centuries and turn into the most advanced civilization on the planet. Create cities, build wonders, make scientific breakthroughs, forge alliances with other civilizations or raise an army to crush them. The choice is yours. Do go easy on Gandhi though, will you? 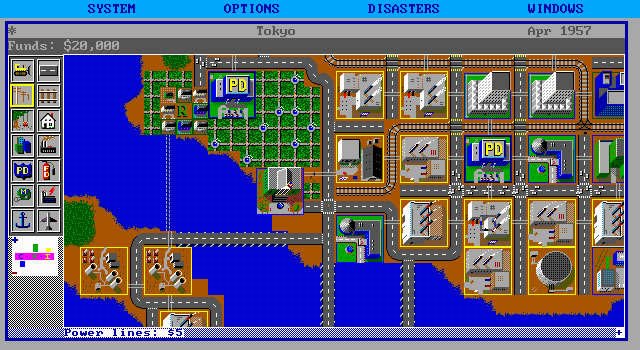 SimCity Classic is an improved version of this already cult classic game. In it you become the mayor of a small town that you can literally build from scratch.

Unlike the original SimCity, SimCity Classic has beautiful VGA graphics and you can use a sound card instead of your PC’s internal speaker. If you don’t know what an internal speaker is, consider yourself lucky (and young!). The gameplay itself is identical to the 1989 original, so have fun creating a beautiful city and keep your fingers crossed that no natural disaster comes along to end it.

The Secret of Monkey Island 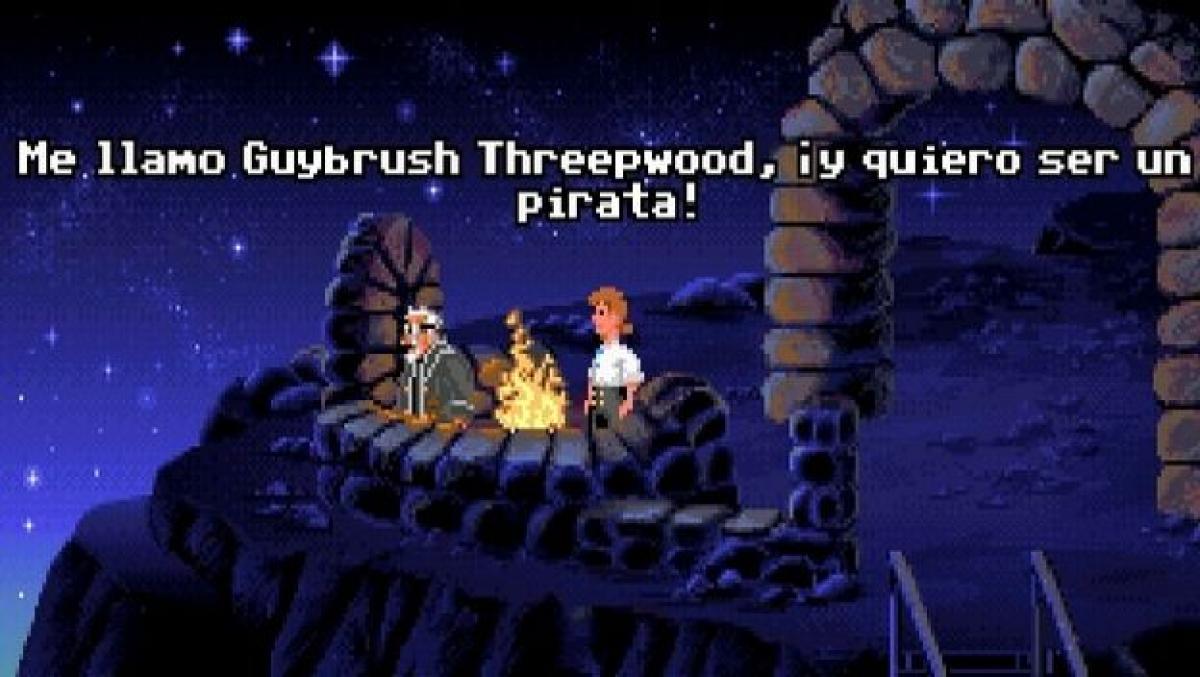 The Secret of Monkey Island is for many the pinnacle of the golden age of point-and-click graphic adventures. Its hilarious comedy, catchy music, and unforgettable characters have made this saga one of the most loved in the world of video games.

In The Secret of Monkey Island, you’ll follow the adventures of the lively Guybrush Threepwood on his crusade to become a pirate. What begins as a simple rite of passage in the life of a buccaneer ends up becoming a relentless crusade to prevent the marriage of his beloved to the ghost pirate LeChuck. Grog, hurling of insults, cannibals, and tons of laughs await you somewhere in the Caribbean. 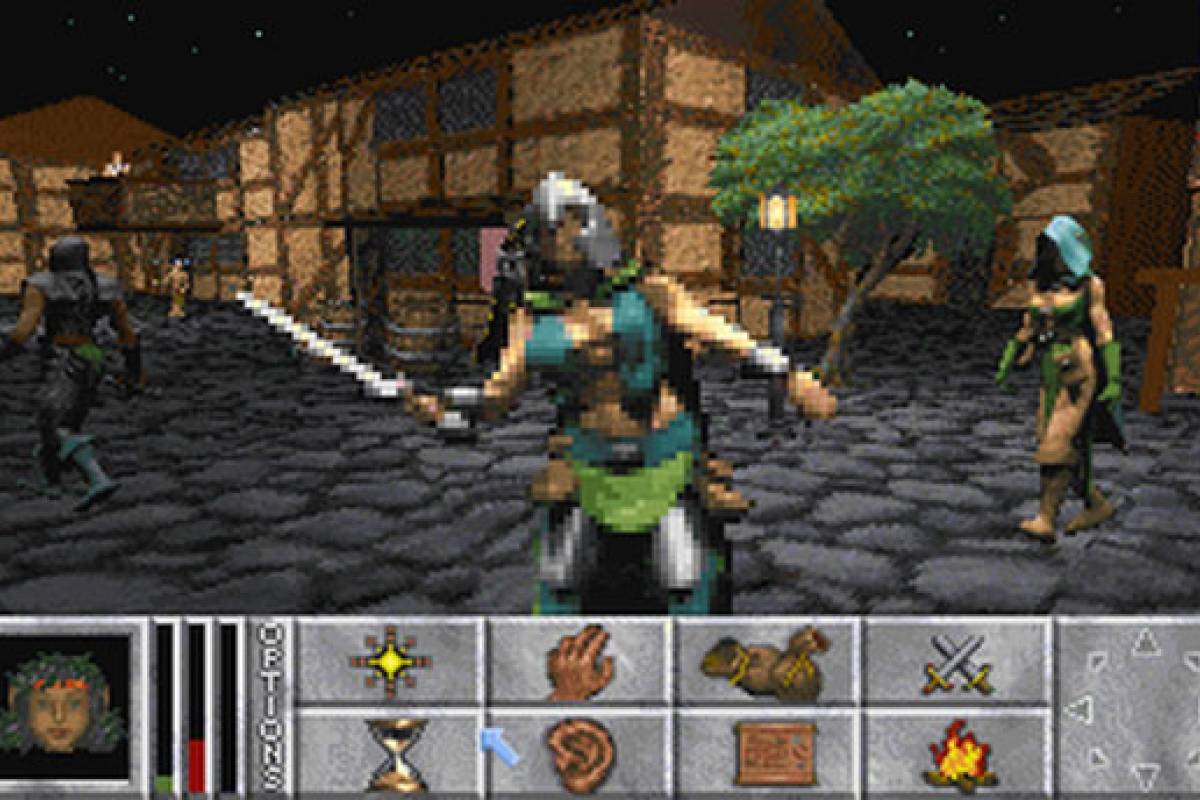 Long before Skyrim, Oblivion, or Morrowind, there was Daggerfall. In this role-playing game by Bethesda, you’ll travel to the westernmost part of Tamriel, to the province of High Rock, where your mission will be to track down a letter in the city of Daggerfall and to free a ghost king.

Although this is the second game in the Elder Scrolls saga, Daggerfall gives the player the best of these role-playing games. Here’s a fact you might find surprising: Daggerfall is the most extensive role-playing game in TES, with over 750,000 characters to interact with, thousands of dungeons, and up to five different endings depending on what we do. 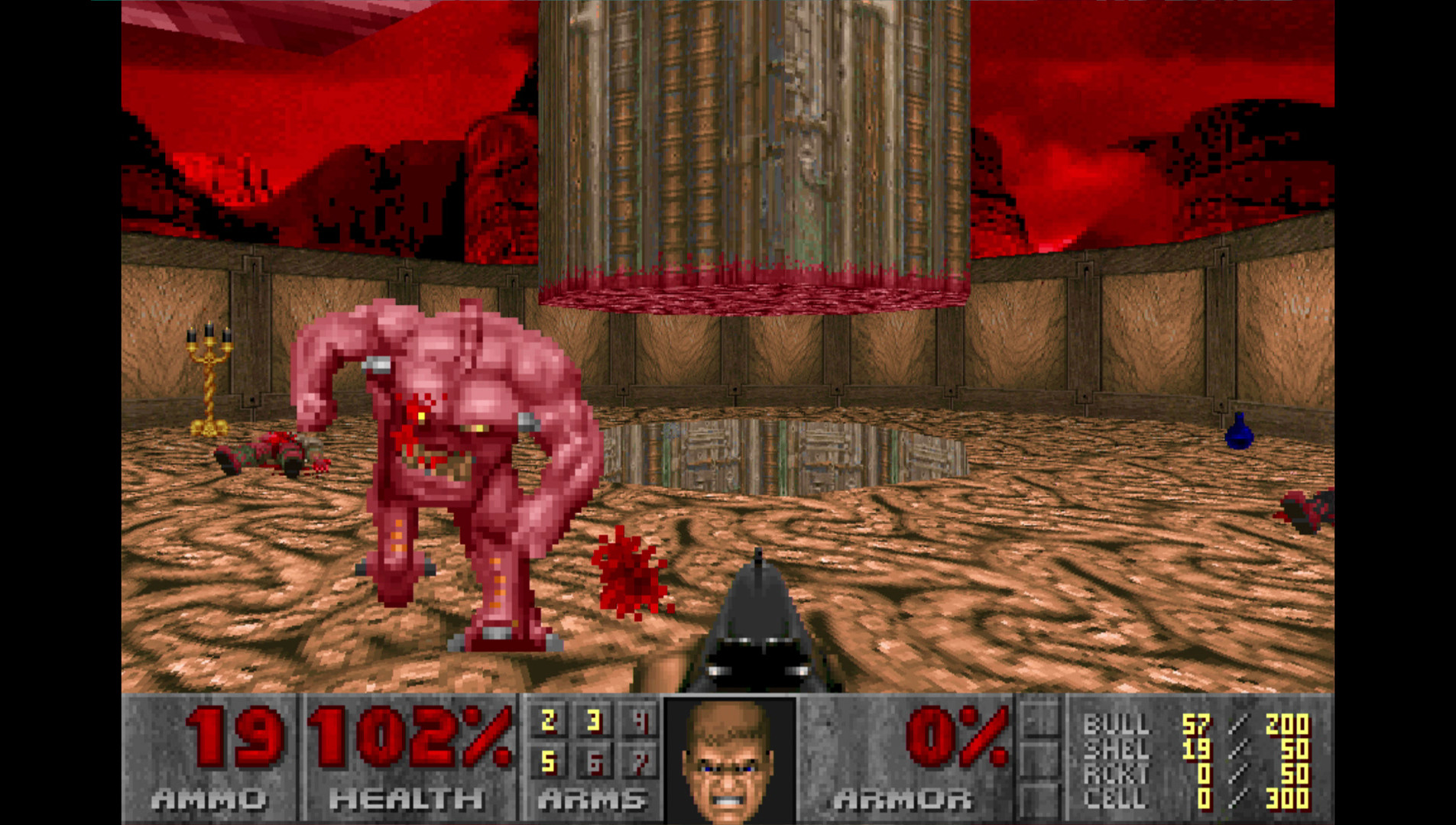 The latest Doom Eternal is hot off the presses, but have you ever played the game that kicked off this well-known id Software franchise? The best way is to play The Ultimate Doom, a game that updates the 1993 original and adds a new chapter called “Thy Flesh Consumed.”

Ultimate Doom has absolutely everything FPS lovers are looking for. Want to send hordes of demons right back to hell? 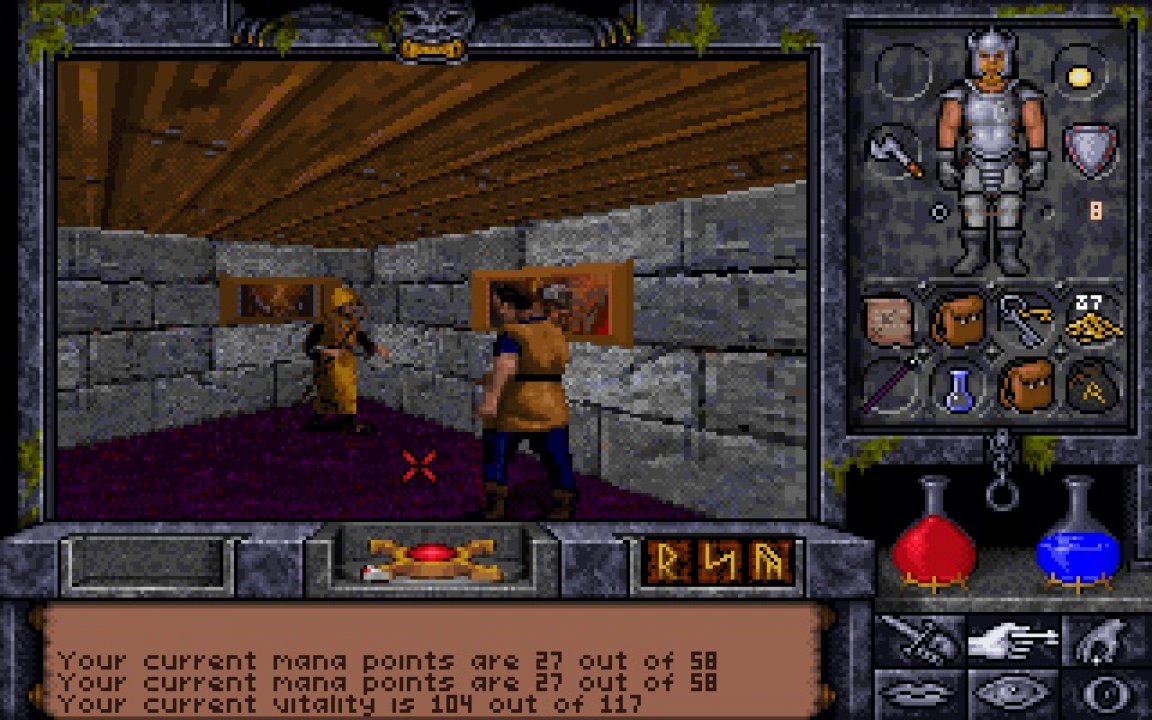 If you like role-playing games, you’re probably familiar with the Ultima saga and its spin-off, Ultima Underworld. This second part is an epilogue to the brilliant Ultima VII: The Black Gate where, after defeating The Guardian, The Avatar will travel through blackrock to several worlds controlled by his nemesis.

Like in the first Ultima Underworld, this is a first-person role-playing game where fighting and exploration of 3D environments are paramount. Since it is about worlds and not dungeons, the game is significantly more varied and fun than its first part. It’s also directly linked to the plot of the game’s main saga!

We hope you liked our list of the best free games from The Archive. We know we’ve left plenty out, so why don’t you help us finish it? Leave your favorite titles in the comments section!