Apple’s September unveiling of their new line of products covered three new iPhones: The XS, XS Max, and XR. While the new phones do boast some neat features and some definite improvements, the response was a little lukewarm. Many users are holding off to buy the less expensive XR  while others found the XS Max to be generally unwieldy. The phones are all expensive and while there are new features are there really enough to warrant dropping near $1,000?

Since there’s any number of reasons the average Joe might not want to purchase a new iPhone, it was the new and improved Apple Watch that really stole the show. 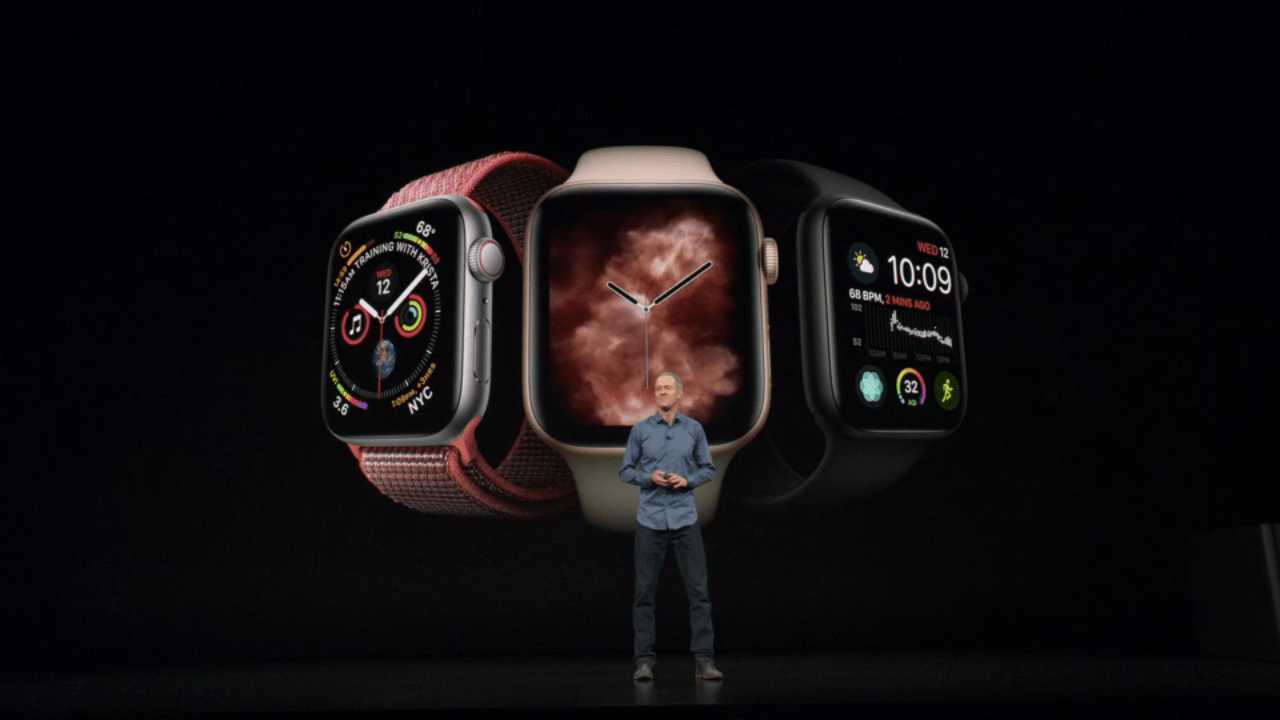 Unconvinced that the new watch is deserving of your attention? What makes the new Apple Watch so great anyway? After doing some research of our own, these look to be the top 10 reasons you need one in your life.

10. You can re-use watch bands

Starting small, one nice aspect to the new Apple Watch is that you can re-use the same bands from the old S3 model. It’s nothing ground-breaking and certainly doesn’t do anything in the way of jaw-dropping new tech, but since the bands are as varied in appearance as they are expensive it’s nice to know that anyone who owned an Apple Watch previously will be able to simply substitute in their old bands and not have to buy a whole new one just so it fits the S4.

For a company that’s infamous for trying to get you to drop more cash on accessories and is often accused of planned obsolescence it’s good to see that at least they’re not adding new mandatory wristband purchases to the list. 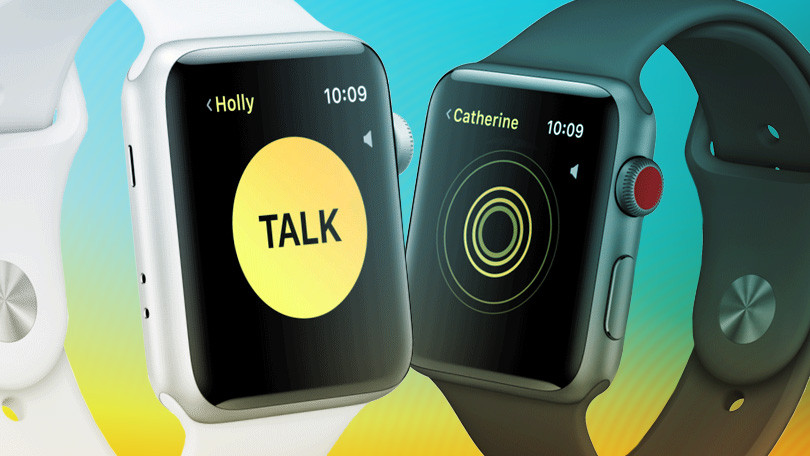 Walkie-Talkie mode isn’t a new feature for the S4, but if you’re new to Apple Watch, this could be the first feature that catches your interest. Walkie-talkie mode is essentially a FaceTime call that’s interrupted by button presses when you want to speak (much like a real walkie-talkie). It’s useful when you’re out shopping or want to try and find someone in a crowd. We have to admit, though, it can be a little jarring to suddenly hear your friend’s voice coming out of your wrist unannounced!

The reason this didn’t score higher on our list is that while this is certainly a fun feature, the fact that both you and the other user both need the FaceTime app on your iPhone and need to have FaceTime audio set up to make and receive calls just make this feel like a gimmicky side note to the already inherent FaceTime feature. That and the fact that it looks awfully silly when you try to use it without pressing down with your other hand … 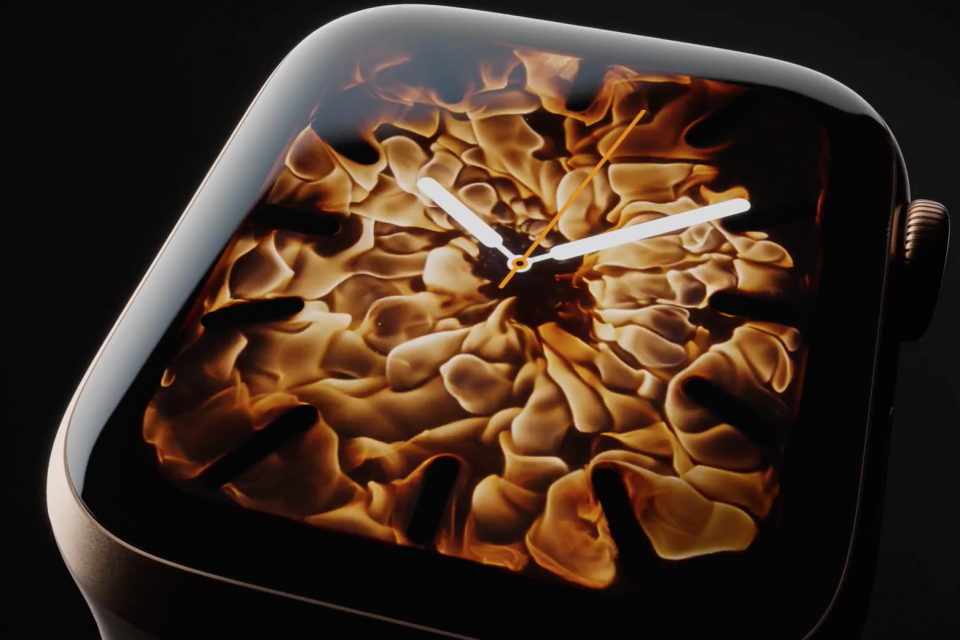 Aesthetically we can’t argue that the new Apple Watch faces look beautiful. Be it mesmerizing color swells, the cool fresh flow of water pooling across the screen, or a functional spread of complications and info graphs, the fact that users can intuitively customize to their heart’s content is something we want to see more of from Apple – let the people decide how they want the product to look! 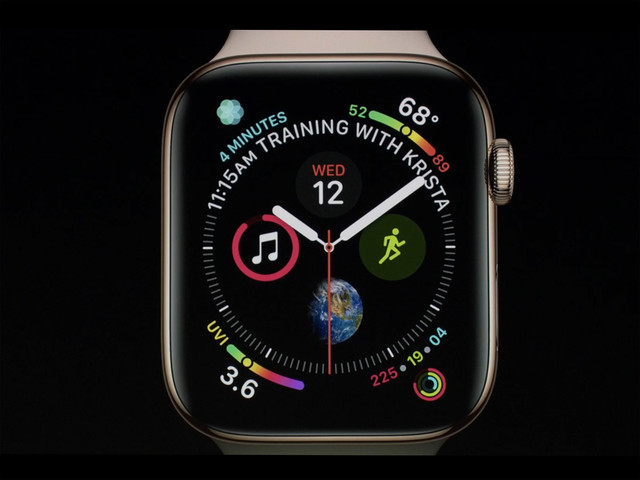 If you want to learn more about how to customize your watch face, check out this useful guide.

This one’s big for us since our main use for the watch (besides using it to tell time (imagine that!)) is using it to take phone calls, write messages, talk with Siri, and chat with FaceTime – all of which benefit from improved microphone and speaker. We were okay with holding the watch up to our ear with previous Apple Watch generations but after trying it out on the S4 … we don’t think we can go back. 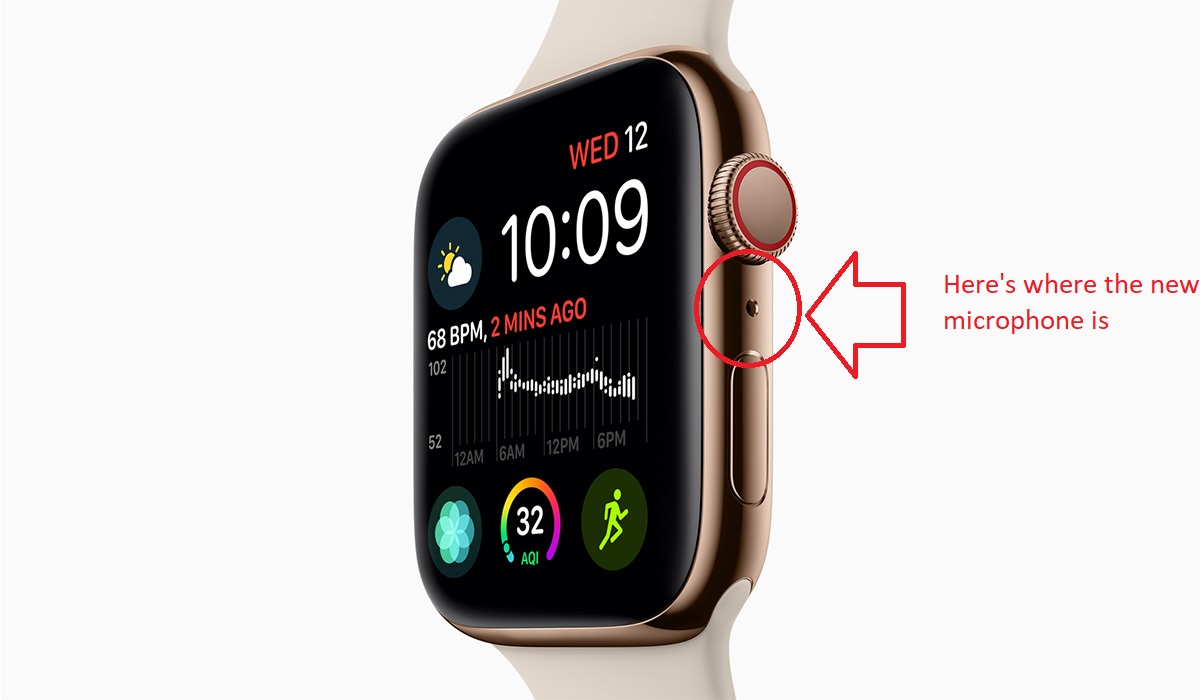 The new microphone is next to the (now thankfully less red) dial and can pick up your voice from over two feet away, making it far less awkward to talk into. As for audio reception is concerned we were surprised at how much louder and clearer we were able to hear on it. The audio quality of the S4 actually rivals the iPhone X in terms of clarity, which is crazy considering one’s a phone and the other is a wristwatch.

Going along with the S4’s improved aesthetic we can’t ignore the inclusion of sensors for haptic feedback and a smaller Digital Crown. How much smaller is it? The S4 knocks down the bulkiness by approximately 30%, but still somehow manages to feature more components than the S3. 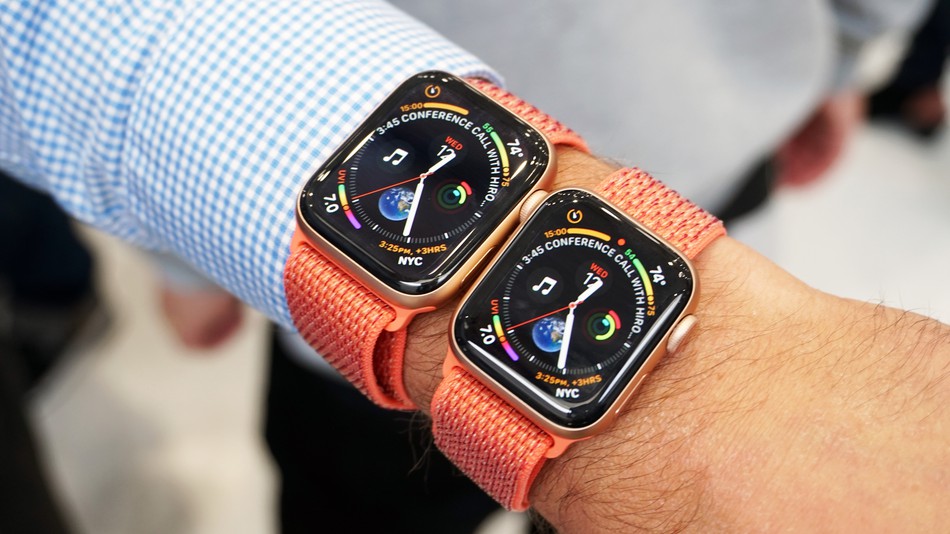 The actual watch face now comes in two sizes as well (as shown above), with the first being 40mm and the other 44mm. Similar to the iPhone XR vs the XS Max, Apple has proven it’s wise to spread the demographic from the previous median of 42mm, allowing for folks to choose whether they want a smaller, more compact watch or one that has a larger screen.

You can also use the Digital Crown to scroll as before, but the new haptic sensors make for vibrations with each pulse. We didn’t think that would be something we’d care about but it makes for a surprisingly satisfying feeling. Not to mention it could potentially help to use the watch without even looking at it; just go by the pulses.

The first thing our cynical minds thought of while Apple was presenting the abundant new features of the Apple Watch was how much quicker it would likely drain our battery life. Imagine our relief when we heard that it lasts even longer than the S3.

While the S3 could go about 18 hours before needing a recharge, the S4 can go at minimum the same amount of time, perhaps even as long as 1.5-2 days, depending on how frequently you use it and which apps you’re using.

How to use Emergency SOS on your Apple Watch S4

Remember how we like to use our watches to make calls, send texts, and use FaceTime? Pepperidge Farm remembers. Luckily so does Apple, which is why we were treated to improved wireless reception in the S4. 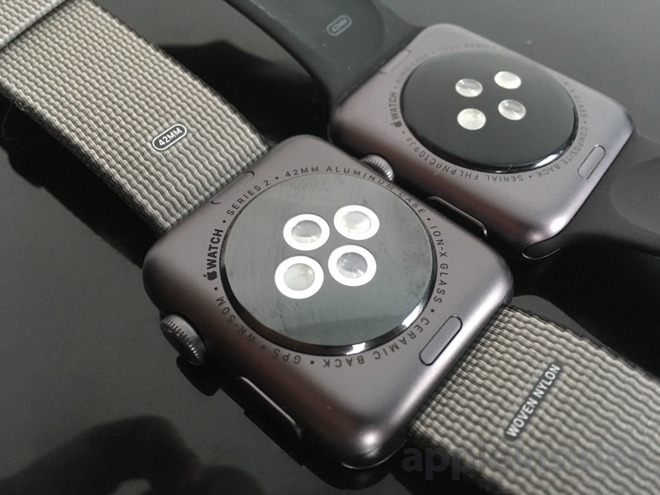 How do they accomplish this? It’s actually the hardware – the back of the watch is no longer made with metal, but instead uses ceramic – a material that generates better reception since the wireless signals can better travel through it. The result is that your calls will come in and be broadcast that much faster than before.

Despite that, Siri can still be a little sluggish. It takes a little longer to establish connection, which often leads to the frustrating “hang on” message or “I’ll tap you when I’m ready.”

OS 5 is another excellent facet to the Apple Watch, and it brings to the table virtually anything you could want to use your watch to do. More likely, it’s probably even going to offer you things you never even thought you needed. 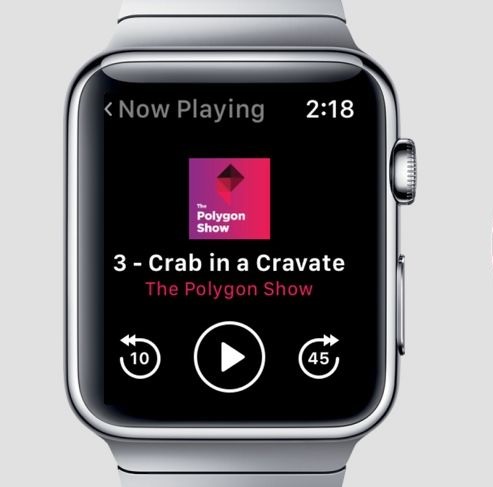 OS 5 allows for Podcasts, streaming Apple music, the aforementioned walkie-talkie mode, automatic workout detection, accessing Control Center and Notification Center within apps, and the additional new watch faces we brought up earlier. For those of us who frequently use our Apple products for music and podcasts, this is extremely convenient.

The S4 chip is the latest in Apple’s tech and its incorporation into the S4 Apple Watch might just be the best thing about it. No matter how you use your watch, no matter what function you derive from it, no matter what lifestyle you follow it’s going to make using your Apple Watch faster, easier, and more useful to you on a daily basis. 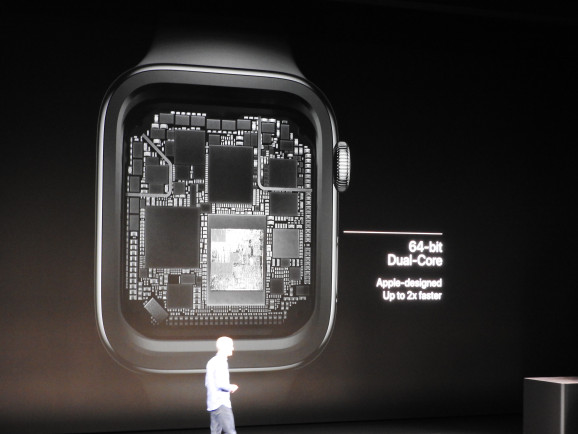 According to Apple, the S4 chip boasts double the power of the chip they used in series 3. The result is that the Apple Watch now boots up faster, launches apps quicker, and is overall far more responsive to everything you do.

The reason this is so high on our list is that the whole point of the Apple Watch (when compared to the iphone) is that it encourages speedier utility, more spur-of-the-moment app usage, and provides the feeling of being constantly entwined in your network of apps, conveniences, and contacts. When everything about that is done that much faster it really feels like it’s doing the job right. 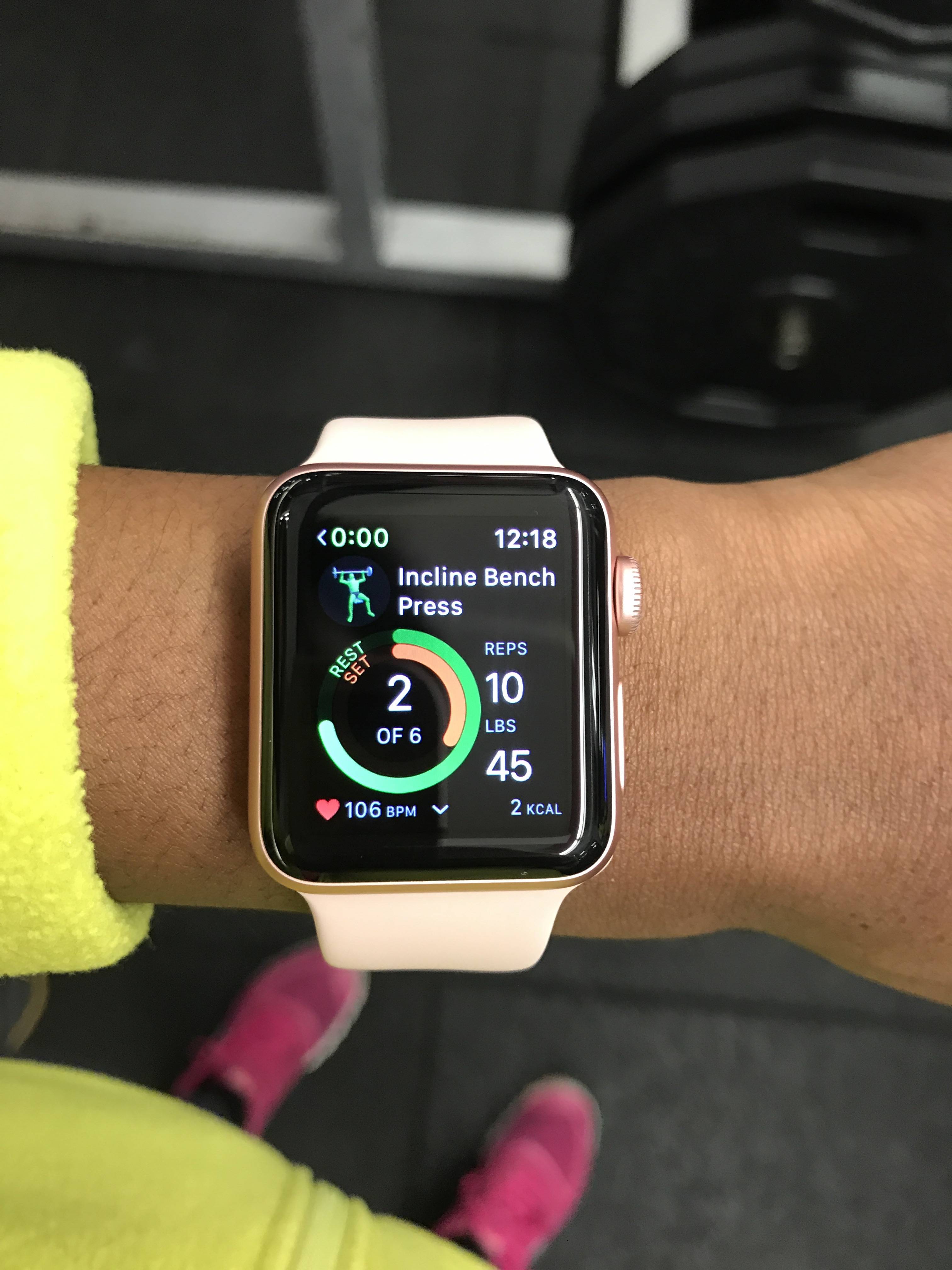 For all the great features we mentioned already, they’re pretty much icing on the cake compared to the Apple Watch’s new health and fitness settings: The watch’s heart rate sensor is more accurate than before and is FDA-cleared to now detect atrial fibrillation. It’s also gotten a boost in the way of fitness tracking, providing more up-to-date readouts and scans as well as allowing fitness competitions with friends over the course of a week. Not for everyone, perhaps, but for the many athletes who work better with group encouragement, this is a huge way to encourage more consistent fitness. 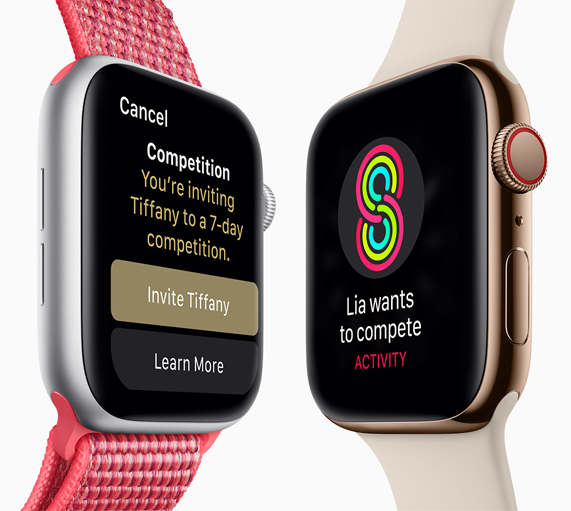 The health tracking isn’t just for jocks and athletes, though. Fall detection due to the new accelerator and gyroscope mean that this watch could literally save your life. This feature works in tandem with the SOS, which calls emergency services if you don’t show movement over the course of a minute after the fall is detected. With its heart rate scanning, the S4 can also now detect when your heart rate is too low, unlike previous generations that only knew how to alert when heart rate was high. Lastly, the new watch can also take an electrocardiogram, which you can instantly send to your doctor as a .pdf. 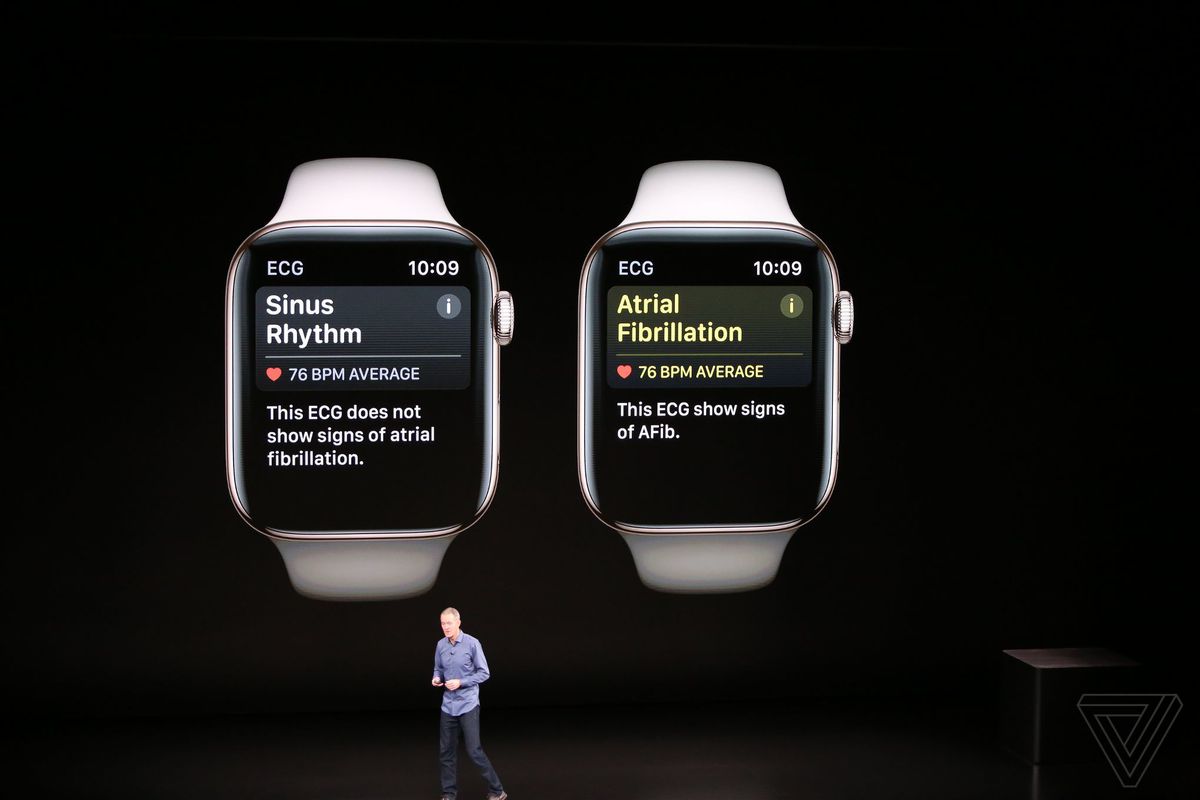 Pricing for the Apple Watch starts at $399, with $499 if you want cellular built in. If you want stainless steel that also has cellular you’re looking at a watch that could cost upwards of $700. Pricey, yes, but still less than even the cheapest of the new iphones!

Love the new Apple Watch S4 and want to see more of its features? Check out this awesome video listing over fifty!