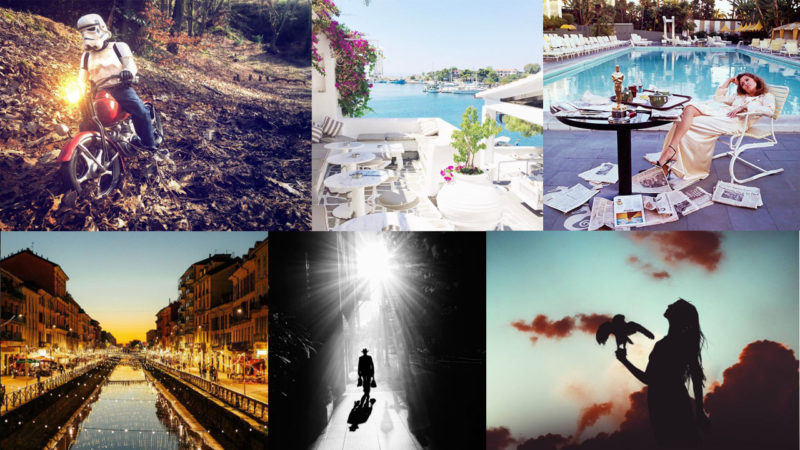 Instagram is a social network for images that everybody uses as they wish. Yet, an overload of photos of food, animals and makeup looks has distorted the idea of a photo social network and it’s not always easy to find good accounts to follow for seeing truly spectacular photos (whether from professional photographers or very talented amateurs). That’s why in this article I’ve made a list of ten really appealing IG accounts, full of gorgeous photos of different styles: landscapes, portraits, still lifes…

Take a look at them all and be swept away by their beauty and talent and hey… who says some day you can’t take photos as good as these artists?

Austin is a young photographer specializing in travel photography, so on his account you’ll see a myriad of spectacular photos taken in remote landscapes on earth. Although he’s a professional photographer whose work has been published in outlets such as National Geographic, he’s also a fierce defender of photos taken with cell phones. An Apple ambassador, he tries out new iPhones before anybody else does to put them to the test. In fact, he’s published a free ebook where he teaches how to use an iPhone to take professional quality photos, which you can download here.

It’s actually pouring rain in this shot but I liked it better without… so I put it on a tripod and exposed just a little bit longer, rain disappears!  Oh and that’s a road, not a river!  Isle of Skye, off the northwestern coast of Scotland, 2008 (w/ my Dad.) Shot w/ Canon 1DS MK III. #mannarchives

In the description of Jason’s account, he says “follow me into the dark” and when it’s all said and done, his Instagram is filled with black and white photos. In these monochrome snapshots, this photographer shows the beauty of urban landscapes, making use of general shots, impossible perspectives and lots of symmetry to show you a real world that becomes dreamy through his talent.

Anna’s account is the opposite of Jason’s, especially with her use of colors. On Instagram, this lifestyle and travel photographer illustrates a life of pastel colors, glamorous scenery and modern still lifes involving makeup, gadgets or a Starbucks coffee. Come on, if Instagram had existed during “Sex in the City,” this would have been protagonist Carrie Bradshaw’s account. All glamour and good vibes that cheer up any grey morning you may have.

Because making swatches in hearts is way more fun than stripes 💗💗💗 These new @lorealmakeup #infalliblepaints lipsticks are so buttery they’ve stollen my heart.  I was obsessed with colouring as a kid, markers, pencils, pastels you name it, I had it.  Once I hit pre-teen I remember begging my mom for my first lipstick lol oh how my 13 year old self would have loved this photo! 😍 I guess my love of colourful things started from birth and never left me! So tell me whats your favourite colour? Lip shade? I want to know 🙂 #paintyourself #ad #colourmakesmehappy #livecolorfully

Why use human models, who can have bad moods and long faces, when you can pose a doll instead? This must be the philosophy of Darryll Jones, whose IG profile stars a Stormtropper action figure. This intrepid character treks all over the world, visiting Irish plains, making street graffiti, playing guitar beside a river or “chilling” with a ginger ale. Besides this character, if you go through Darryll’s IG, you’ll find other tiny photogenic plastic models.

. “North is to South what the clock is to time There’s east and there’s west and there’s everywhere life I know I was born and I know that I’ll die In between is mine” . Name the artist of the lyric 😉 . Eric and his custom made @dangelicony guitar. Sitting on a rock somewhere in @visitwales 🙂 #snowdonia . Shot with the @sigmaphoto Dp0. #haveyouseeneric #guitar #wales #toyphotography #stormtrooper #starwars #amireally42 #toys #feeedom #neverstopexploring

Terry O’Neill is a “photographer of the stars,” with 5 decades of shooting stars from movies (Paul Newman, Sophia Loren…), music (Bowie, the Beatles…), fashion (Kate Moss…) and art in general. On her IG, you won’t see recent material (although she still works) but rather snapshots of the 50+ years of her career, including many photos from the age when digital cameras and Photoshop didn’t exist. If you’re a mythomaniac and adore portrait photography, you’ll enjoy the beauty of this IG.

Canadian Joel Robinson is a master of surrealist photography and retouching images. In his photos, you’ll see people surrounded by dreamlike environments. At first glance, maybe you’ll only see a good Photoshop retouch, but if you delve deeper, you’ll discover a peculiar world full of symbolism and social criticism.

Italian Simone Bramante defines himself, above all, as a “storyteller” and after checking out his IG you’ll see why: his photographs are very illustrative, showing beautiful rural landscapes or cities or people traveling the world. In each photo, you can build a story that you too want to experience, thanks to his exemplary use of light and color that makes the places he shows us even more beautiful.

{ Golden Florence } • I passed through one of the most famous landmarks at dawn, just in time to stop by, look at the empty city and continue my journey. #thereisalwaysajourney w/ @napapijri #napapijri

Hailing from Tokyo, Hiroaki Fukuda shows beautiful photographs of the Japanese capital on his IG, which get away from travel guide stereotypes. But that’s not all! This artist is constantly on the move and photographs the whole world, from the Far East to the most cutting-edge European buildings, such as Stockholm’s dreamy metro station. Follow him if you want to see great cities and the most idyllic beaches from new perspectives.

If you like socially engaged photography, you’ll love Brown’s work. This photojournalist goes around the world covering all kinds of conflicts and difficult situations. However, he avoids typical war photographs or excessively dramatic shots to show the more human face of conflict. For this, he puts the protagonists of these situations front and center, whether they are children, civil adults or soldiers. His idea is to show that, despite difficult situations, people don’t stop living everyday life.

families stood for hours in the rain and total darkness in the countryside of camaguey, our headlights the only light! la caravana de tributo a fidel 2016

If you adore feminine beauty, you’ll love Luiz Clas’s account. On his IG, this Brazilian photographer posts tons of photos of long-haired girls, but avoids the hypersexualization of women: his models use non-exaggerated poses with simple attire, which emphasize their natural beauty even more. Additionally, once in a while he posts photos of adorable dogs and other animals that seem out of storybooks, what more could you ask for?

Tell me where you at

How to Use PS4 Controller on Gameloop in 3 Easy Ways