“A lot of people think their searches aren’t tracked in private browsing mode,” stated DuckDuckGo Chief Executive Gabriel Weinberg. “Unfortunately, that’s not true.” This year has been rife with security breaches for Facebook and Google,  and it’s starting to really hurt their business.

Facebook’s new Portal devices, which are smarter household vid chat cameras, might have received a more positive response had they been released fall of last year. Things have changed a lot since then. These days the response to Portal has been mixed at best. It’s no surprise; people are rightly concerned about security in their homes and on the Internet.

Last year, DuckDuckGo conducted a study to see whether privacy was a mainstream concern in the U.S. They found that 24% of adults cared enough about their online privacy that they would take significant action to keep it protected. 65% said that they would be motivated enough to switch search engines if they knew the new one would refrain from collecting personal data pertaining to their searches. As far back as January 2017, as many as 84% of Americans said that they would opt for a different web browser if it would encourage more online security and safer online browsing.

DDG conducted that study last year. That was before the Cambridge Analytica disaster, before the Fall 2018 breach, and before there was a new kid on the block that could stand to make a real difference:

If this is the first time you’ve heard of Brave, it wouldn’t be surprising. Brave is just now getting out of its Beta release phase. Brave now offers versions for iOS, Android, macOS, Windows, and Linux. The concept of a browser that could run faster and keep users safer and more private has been in the works since May 2015. Their partnership with DuckDuckGo was established as far back as last year:

Developed by Brian Bondy and Brendan Eich, formerly of Netscape and Firefox fame, Brave is an Internet browser that prioritizes safety, speed, and incorporates user-focused UI and settings. If you’re not familiar with Brendan Eich, he’s the guy who invented JavaScript back in the Netscape days and went on to co-found Mozilla. Brave is his third major browser project, and it’s looking to be his best.

Brave is a true ad-slayer, automatically blocking all trackers and shaking off unwanted cookies, pop-ups, and banners to keep your browsing session as productive and uninhibited as possible. Its default utilities will auto-upgrade existing connections to websites to HTTPS protocol, meaning your security will be even tighter still. Everything else can be dialed up or down via the settings menu. You can adjust the browser’s firewall by altering your shield preferences, meaning Brave only lets in what you want it to. You want extra privacy? Try Brave’s Tor tabs feature. In addition Brave gives users an interesting way to continue to support the publishers who have lost revenue from blocked ads–a blockchain based Brave Rewards solution.

DuckDuckGo is not a browser but a search engine. The company describes itself as “the search engine that doesn’t track you,” and that’s the backbone of their entire campaign, which began in 2008. Unlike Google, DDG never mines personal data or keeps track of a user’s browsing habits.

Every time you enter a search with DuckDuckGo the search engine treats you as though it’s your first time there. You won’t be seeing any purple-highlighted links signifying that you’ve clicked here before. You’re not going to be seeing any banner ads that seem eerily pertinent to your personal life either.

“We simply don’t store anything that can tie your searches to you personally,” they assert, “or even tie them together into a search history.” They run a pretty tight ship, and have every facet of their privacy policy laid out on their website.

In December 2017 Brave and DuckDuckGo saw that they shared a mutual passion for online privacy, and saw the benefits of a collaboration that fed on each other’s strengths. They agreed to partner up in an effort to elevate online browsing into becoming a more secure experience.

If Brave is allegedly the best solution for online privacy, then what good is it to have a search engine that does the same thing? Isn’t Brave powerful enough to handle discretion on its own?

While Brave offers unparalleled protection against pop-ups, ads, cookies, and other forms of tracking, DDG explains that even when you’re using Brave as a browser, “search engines such as Google record what the user enters in the search bar.” As a search engine, Google is still so entrenched in its use of targeting and cookies that Brave can’t offer its peak strength in its murkier waters.

Despite its name, incognito mode doesn’t actually protect your searches. In many browsers, erasing your browser history after your incognito search won’t make a difference either; that will only delete your local browsing data but won’t stop websites (like Google) from tracking you through your IP address, which is pretty scary. That’s why Brave gives you the option to swap over to DDG as a search engine when users wish to search more discreetly.

Switch over to a private tab, and DuckDuckGo takes over. Open an incognito window in Brave and the first thing you’ll see is a push to use DDG as a search engine. Brave puts it like this: “We already block ads and trackers that violate users’ privacy; using Private Tabs enhances privacy by not logging anything from those tabs in History or browsing data, and adding DuckDuckGo in Private Tabs further protects user privacy with anonymous searches.” 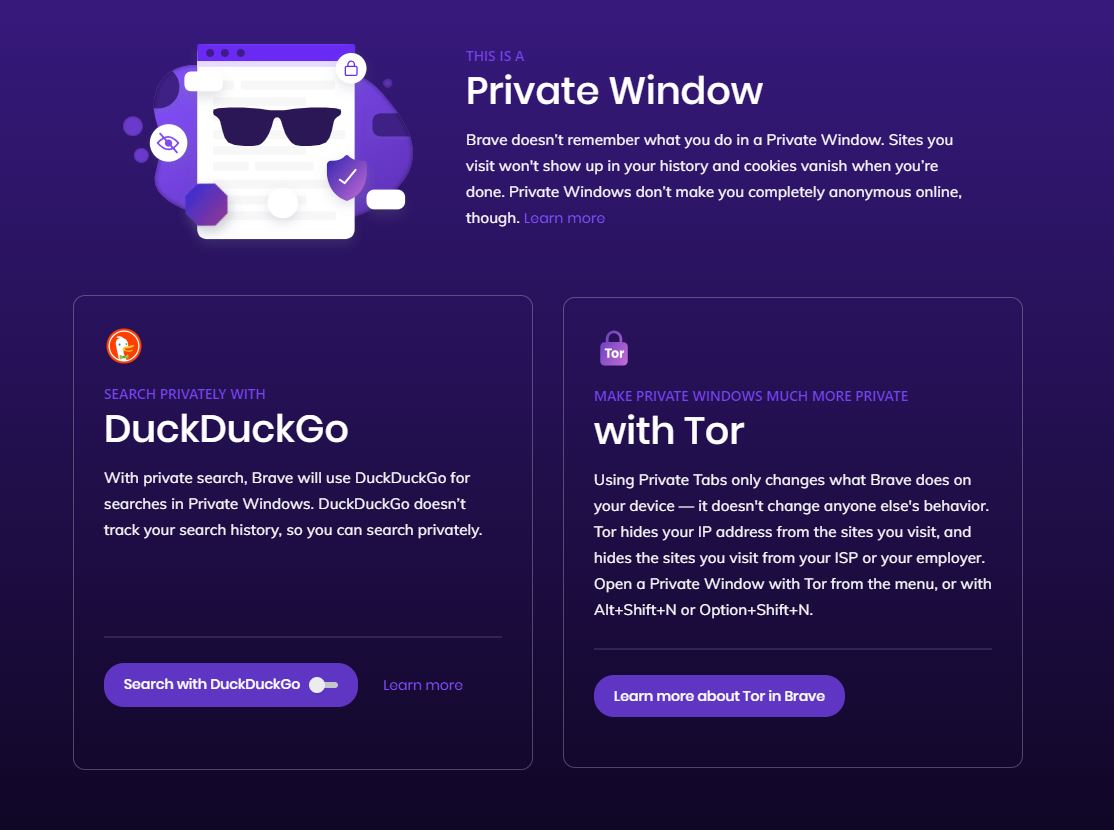 For many, there still may be times when you want to use Google or another less private search engine such as Bing or Yahoo. But if you want to fly under the radar, or just don’t like the idea of Google following you with targeted ads, then open a new window, switch on DDG as per Brave’s recommendation, and experience the fastest, safest, private search you’ve ever initiated.

“Users can now search without the search engine collecting personal data about them.” Brendan Eich proudly stated. “Users have suffered long enough from the current broken online ecosystem, and with the right tools they can reclaim their privacy and take a stand against the intermediaries that exploit their personal data.”

DuckDuckGo is currently incorporated as Brave’s preferred incognito search engine, and works on iOS, macOS, Windows, and Linux. Download the browser now and see what it’s like to search without Google hovering over your shoulder.