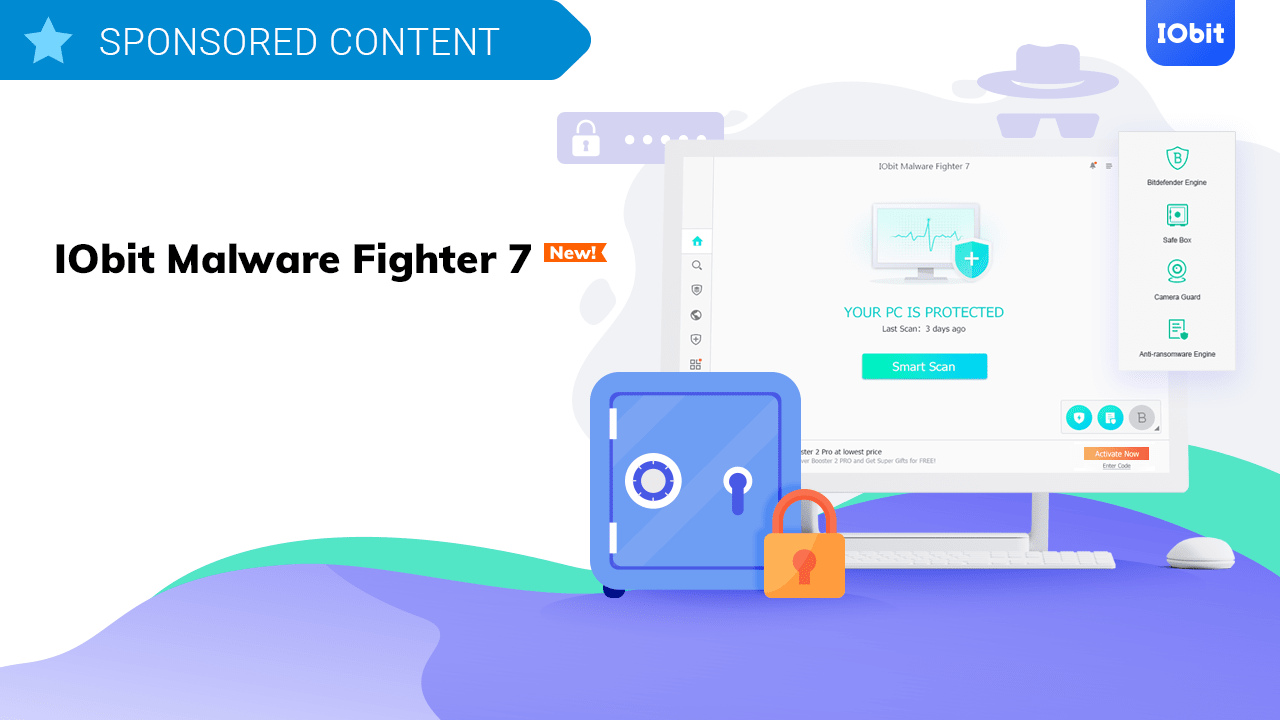 The more time you spend online, the greater the risk to you and your data. Today, a simple antivirus program just isn’t enough. Cybercriminals are using increasingly sophisticated methods to hijack, corrupt, and exploit your machine, and if you don’t keep up with the toughest security protection, you’re putting yourself and your data at risk.

Earlier this month, IObit launched the latest version of its award-winning system protection suite, IObit Malware Fighter 7. As an advanced security solution for Windows, IObit Malware Fighter has already won praise from press and users alike. Now boasting a 60% larger threat database, faster performance, and even easier to use interface, this could be the only online protection you’ll ever need. Read on to find out why.

How IObit Malware Fighter 7 protects you

Cybercriminals think they know more than you. They count on you being too lazy, busy, or ignorant to employ the best system protection. They will use your indifference against you, so it’s therefore important to invest in protection that covers all angles.

IObit Malware Fighter 7 is no ordinary PC security suite. It incorporates the latest and best antimalware, antivirus, and anti-ransomware engines to detect, alert, and remove all threats to you, your data, and your machine, including:

In this latest release, you benefit from redesigned antimalware and anti-ransomware engines, as well as the industry-leading BitDefender antivirus engine. As a result, IObit Malware Fighter 7 now runs 63% faster than the previous version in detecting threats on a full system scan. Since timely detection is important to avoid damage, this is a huge boost to your protection.

One of the most worrying cybercrime trends is cryptojacking – the hijacking of your computer’s CPU to mine cryptocurrency, usually through your internet browser. Since you often don’t realize it’s happening, cryptojacking is one of the most insidious threats to you online. Without the right protection, you could be lining criminals’ pockets while system performance suffers.

Universal protection, inside and out

Threat detection and elimination is just one weapon in the IObit Malware Fighter 7 arsenal. Protection extends to your devices, too. Threats don’t simply affect your system, but also your data, boot drive, integrated webcam, and peripherals. Anything you plug into your machine via USB is also at risk.

IObit Malware Fighter 7 acts like a security guard for your entire system, preventing unauthorized access to your webcam, USB-connected devices, and other hardware. It also includes MBR (Master Boot Record) protection that prevents malicious software from holding your data to ransom, such as in the GoldenEye and Petya ransomware attacks.

Finally, IObit Malware Fighter 7 includes an enhanced and redesigned Safe Box that password-protects your data. This prevents anyone from accessing your sensitive information without your consent – not even the most powerful ransomware programs can break IObit Malware Fighter’s file encryption. Use a strong password, and you can rest assured your data is safe.

Why get IObit Malware Fighter 7?

How to Use Snap Camera on Zoom in 3 Fast Steps