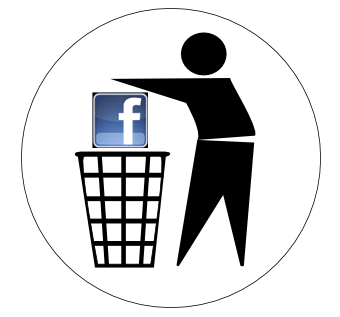 With #deleteFacebook trending across all social networks due to the Cambridge Analytica data breach scandal, we thought we’d take another look at when one of our writers decided to make the fateful move way back in 2010.

Yesterday, I deleted my Facebook profile. Assuming I don’t relent within the next two weeks, it will then disappear, entirely. Forever. Upon announcing these glad tidings to James (he sits next to me) and on Twitter, the general response I got was “Why would you do that?”.

It’s true, removing oneself from a network as huge and overarching as Facebook may at first look a little extreme. Perhaps even a tad sociopathic. But it needn’t be that way. Just because I’ve stopped using Facebook, that doesn’t mean I’m planning to relocate to the mountains and await the Mayan apocalypse in wide-eyed solitude.

There are plenty of reasons why deleting your Facebook profile might be a good idea. Here are five that convinced me:

It’s not like I was so hooked on Facebook that I never got anything else done. But Facebook is carefully designed so that it becomes practically the only website you ever use. And what that means is that sending a quick message to a friend via Facebook inevitably results in looking at photos of a colleague’s summer holiday or getting involved in some water-cooler style discussion about the political issue of the day. Facebook’s time consuming, distracting and doesn’t really add any value to my life. I’ll get more done without it.

Are you using productivity apps correctly?

Read about some common mistakes

My problem is that I can’t resist a good argument and it doesn’t take much provocation for me to stick my oar in. For various reasons, Facebook doesn’t engender a very high level of debate. Not the level you’ll find elsewhere, anyway, which makes it even more frustrating than arguing with trolls on my own blog. Rather than risk massive hypertension, I’ve opted for the best cure: prevention.

As I’ve mentioned before, I’m not particularly concerned by privacy online. I’m generally open about my identity because I’m careful not to act embarrassingly or offensively online. And save for a couple of slip-ups, that’s a policy which has worked. What I have less control over is people on Facebook uploading photos and tagging me in them. I’m not famous, so I can’t imagine why anyone would want to have more than one photo of me watching a band or sitting in a chair. No Facebook profile? No photos tagged with my identity. (BTW – if you are concerned about privacy, do not read this interview with a Facebook employee).

Except for Scrabulous, and when I’ve had to test one at work, I’ve never used any of the ‘social’ games that have helped to make Facebook so popular. Jon’s withering criticism of Farmville hits the nail on the head, and I’m inclined to agree with this article which warns of the anti-social nature of such apps. It’s not just the apps, of course: it’s the nagging, faintly depressing invitations and updates from those of your Facebook friends who are easily entertained enough to spend hours clicking away. You start to think: how come so many people I’m friends with now seem like extras from Idiocracy? I don’t want to feel like that: I’m better off without Facebook.

Well, this might not be true quite yet. But it’ll happen soon. Social networks traditionally don’t have a life expectancy above about five years (that is, from launch to peak traffic). Facebook is different, in that it’s a better-designed site than its predecessors and its development team seems quite quick to react to new trends. But will you be using Facebook in 10 years time? No. Nor will I, because I’ve already left it. That makes me an early-abandoner, which means I’m cool. Cooler than you are, anyway.

Visit this page and follow the prompts. Then leave your account for 14 days. After this time, your account will be erased. You won’t be able to restore it, so be careful! I’ve got a backup account anyway, just in case.

This article was originally published on Aug 19th, 2010.

Are you going to #deleteFacebook? We’d love to know in the comments below what you’re thoughts are on the whole Cambridge Analytica scandal.

7 of the best selfie apps available for iOS and Android