Any economist can tell you that video games are a goldmine. High profile games like Grand Theft Auto V have generated more revenue than any movie that’s ever released. Naturally, advertisers want in on the action. Just like in movies, the logic is that if a product is featured in a popular game, people are more likely to buy it. Product placement must be used carefully, however, as it can easily stick out like a sore thumb and turn people off from both the game and the product. Whether they worked or not, here are the five weirdest product placements that have ever been featured in a video game.

Seeing Mario and friends hurling bananas and Koopa shells at each other out of a Benz will never not be hilarious. It’s so jarring that it actually works. It’s common for car companies to license their vehicles for racing games, but usually, it’s for realistic racers like Forza, not kart racers. Funnily enough, some car brands like Toyota don’t allow their cars to be featured in video games at all, because they fear that their brand would become devalued. Then, a luxury brand like Mercedes hops straight into the Mushroom Kingdom. You can’t exactly blame Mercedes-Benz for wanting their cars featured in the most popular racing game in the world, even if that game is cartoon chaos. Plus, the crossover gave us this amazing commercial: 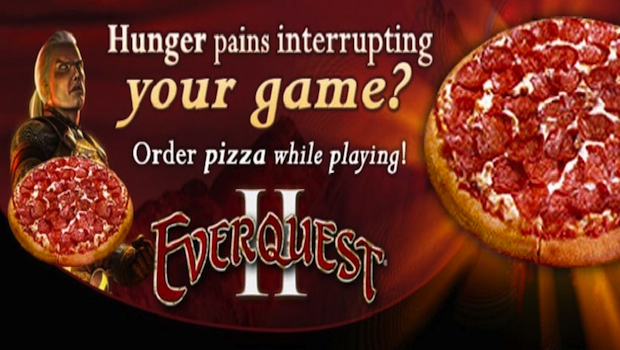 Since the dawn of time MMO players and pizza deliveries have had a symbiotic relationship: one cannot exist without the other. Realizing this, Pizza Hut teamed up with popular MMO Everquest II to allow players to order pizza in-game. If you’re hours into a raid and IRL starvation is preventing you from getting your hard-earned loot, simply type “/pizza” into the all chat to get a pizza at your door within minutes. While many people mock MMO players for their fast food addictions, you have to hand it to Pizza Hut for this stroke of marketing genius.

Back in 2008, then president-elect Barack Obama was noted for using the internet to advertise his campaign. He took it a step further and bought advertising space in the racer Burnout Paradise. Burnout Paradise is famous for its massive open world that spans multiple American states. Billboards for Obama appeared in-game in Ohio, Florida, Iowa, Colorado, Indiana, Montana, North Carolina, New Mexico, Nevada, and Wisconsin, states that had voted Republican in the last election cycle. It’s unknown how well this campaign strategy worked, but look forward to seeing Trump’s face plastered all over the next GTA come 2020.

Sonic fans may have noticed that in Sonic Adventure 2 the titular blue hedgehog wears brand-new shoes. The new shoes are Soap shoes, which is actually a real brand of extreme sporting shoes. The shoes had a hard plastic indent on the bottom that allowed wearers to “grind” on rails, like so:

As if Sonic wasn’t radical enough already, Sega teamed up with Soap to let the blue blur grind rails. I didn’t know anyone who wore Soap shoes back then, but I can only assume that attempts to grind rails with them led to countless injuries. Remember kids, just because Sonic can grind on rails and run through loops doesn’t mean you can.

Note: The final product placement truly needs to be seen to be believed. I truly believe, deep within the recesses of my heart, that no one will ever top how absolutely baffling this next product placement is. 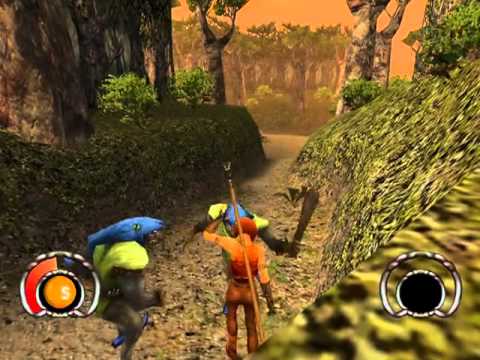 Look at the above screenshot, what do you see? At first glance, it may just look like another mid-2000’s fantasy game. But if you look in the bottom left corner, something looks extremely out of place. That something is a Skittle.

Back in 2002, publisher Simon & Shuster wanted to make video games based on Mars candy, like M&M’s and Skittles. After securing the rights to use the candies, S&S quickly got their developers at work creating the candy based games. The developers of Darkened Skye initially refused to make a Skittles-based game, but eventually agreed to make it on the condition that it would be a humorous fantasy game.

In Darkened Skye, the player uses different magic based on differently colored Skittles. It’s clear that the developers knew that making a high-fantasy Skittles game was incredibly stupid. as the characters in-game constantly use self-deprecating humor. The most hilarious part is that Skittles do not appear at all on the game’s box art, which instead appears as a normal fantasy game. I can only imagine the poor kid who bought the game expecting an epic fantasy adventure only to find themselves using the magical power of Skittles™ candy!

Do you think these ads actually worked? Any weird crossovers we missed? Let us know!

Minecraft meets the Angry Birds in a new adventure DLC