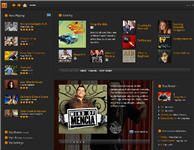 Adobe yesterday announced the launch of their very own desktop internet TV application amid questions over whether the world really needs another media player. Adobe Media Player (AMP) has been built with Adobe Air – the company’s flagship Web 2.0 application. At the moment, a number of content providers are on board including CBS, MTV Networks, Universal Music Group and PBS. Users can also add content from any Flash video sites that support RSS feeds. The service is already being compared to Apple’s iTunes video service and Miro but unlike them, it offers users and broadcasters the chance to earn money from their footage via advertising. In their launch statement, Adobe said this commercial element is what differentiates AMP from the existing options because:

It provides exciting new ways for viewers to discover and interact with their favorite content, while offering revenue and brand-building opportunities for content publishers.

With Adobe Media Player, we’re bringing viewers and content owners closer together, with an experience that doesn’t constrain them by platform or proprietary software application. It’s a merger of TV Guide and DVR for Internet video content. Some great shows, like The Hills from MTV and CSI from CBS, are already available to view and more will be coming soon.

It’s also thought that depending on the success of the service, Adobe will introduce downloads of films and shows to own or rent later this year which would certainly heat things up between the way competitors such as iTunes and YouTube regard AMP. It’s clear that Adobe are trying to create a one-stop media player that will serve all needs ranging from simple video playback of DivX files to downloading and rental of movies. The worrying thing is the amount of advertising that may be necessary to keep AMP free. Launching an internet TV service supported by advertising is far from easy, as Joost has been finding, and AMP will have to prove that it can provide high quality and popular content that are not bogged down in ads if it is to succeed.