A very common problem Mac users have is playing Windows Media Video (WMV) files. When your Mac attempts to open and play WMV files by default in QuickTime, you’ll commonly receive an error message along the lines of ‘This is not a movie file’.

The reason behind this it the fact that WMV files use Microsoft proprietary codecs that don’t work in OS X. This gets really annoying if you come across a WMV file and want to watch it on your Mac.

Microsoft discontinued Windows Media Player for Mac way back in 2006, meaning there’s no longer a tailor-made player for the WMV format for OS X. Fortunately, there are a few free and easy solutions.

Option 1 – Use a Mac Video Player that Supports WMV

The good news is that there are plenty of simple and useful choices when looking for a wmv player for Mac. There are dozens to choose from in our catalog, but below we’ve selected the top 3 WMV compatible players for you.

This is probably the easiest solution to watch WMV files because it enables QuickTime playback of WMV files.  This plugin, created by Telestream, allows you to import, export and play Windows Media video and audio files on your Mac. The Flip4Mac WMV plug-in also works with other QuickTime based apps like iMovie and Final Cut Pro, meaning you can even edit WMV files on your Mac too.

The most versatile player out there, VLC media players lets you play WMV files without the Flip4Mac Plugin, although it’s only a playback solution; it doesn’t let you edit WMV files in QuickTime supported apps including iMovie and Final Cut. The great thing about VLC Media Player, however, is that it’s lightweight, fast, and can handle almost any media format you throw at it.

Get More With These 5 Expert Hacks for VLC Player

This player emerged out of the Google Codes project as an attempt to create an all-round player. MPlayer OSX is a simple but powerful video player designed specifically for Mac and can handle WMV playback. It features more options and preferences than VLC Player, with the only drawback being that the first time it plays a video, it has to build a font cache, which can take a while. Luckily, it only has to be done once.

Option 2 – Convert the WMV file to a Different Format

Another option, and one that is equally good is to use a tool to convert wmv to mp4 or another popular format supported on the Mac. This is a particularly good option if you’re going to want to share the video with other Mac users. Once again, there are a lot of wmv converters for the Mac in our catalog. To save you some time, we’ve hand-picked some of the best ones right here.

Oh, VLC, what would we do without you? Yes, if you’ve read this far then you know that VLC Media Player already shows up on our list of WMV Video Players.

But VLC is also a killer tool for converting videos of all formats, and it’s hands-down the best tool of the bunch for converting WMV to MP4 or any other major video format supported by the Mac.

Another top-notch option for converting WMV files on your Mac to another format is Total Video Converter. It features a friendly user interface that will be more comfortable to some Mac users than VLC and it supports conversions of over 160+ video format types.

The unregistered lite version is limited to converting just the first 30% of your file, however, and you’ll need to upgrade to the Pro version of Total Video Converter to complete the job.

But VLC is also a killer tool for converting videos of all formats, and it’s hands-down the best tool of the bunch for converting WMV to MP4 or any other major video format supported by the Mac. 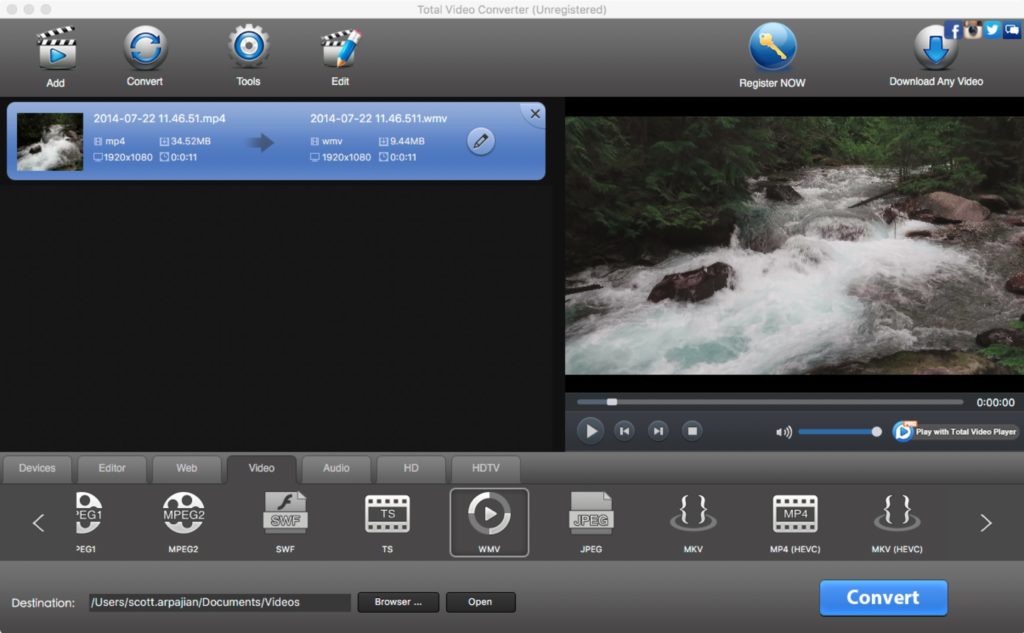