Apple’s launch of iOS 7 is interesting. Not because it’s only an updated operating system for iOS users, but because it dramatically changes the user interface and experience.

In my opinion, iOS 7 is Apple’s version of Android‘s launch of Ice Cream Sandwich. It’s an overhaul of the visual interface and improves on the user experience. 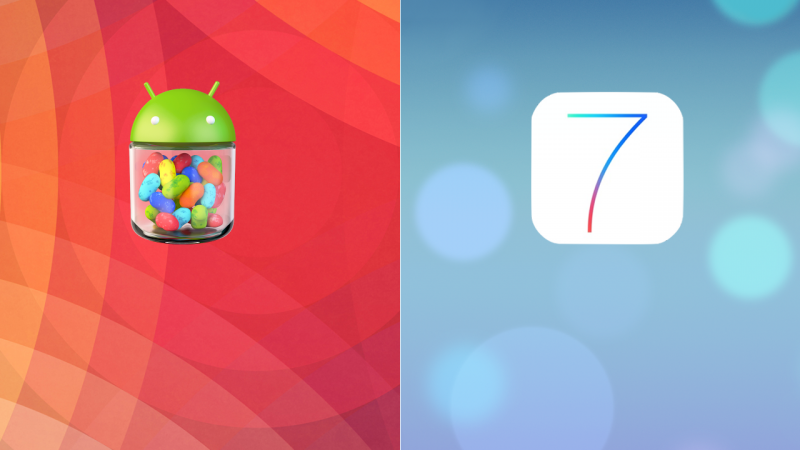 Core functionality still exists like the grid-based arrangement of folders and apps, but the addition of Control Center and Siri out of beta show that Apple is aware of the changing mobile ecosystem. While it’s easy to make the argument that Apple copied features already existing on Android devices, the two operating systems will continue to co-exist.

As developers are making apps for both platforms, the choice between either OS now comes down to personal choice and not a lack of features.

But with iOS 7, how does the new operating system compare with Android?

The user interface in iOS 7 is a big change from iOS 6. The new OS includes live/dynamic wallpapers that move according to the accelerometer. Custom wallpapers can also move slightly and photos taken in panoramic mode through the native Camera app with also contain movement. If you’re not interested in live wallpapers, you can still set your own. 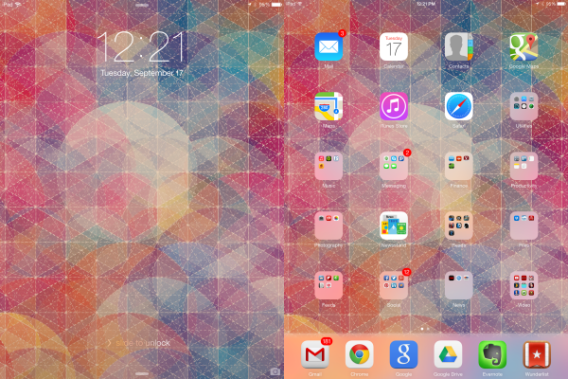 A lot of attention has been given to the new flat design scheme for icon and menus. Skeuomorphic design has been removed from iOS 7 and overall the OS looks elegant. Apple took time to redesign the icons giving everything a refresh. 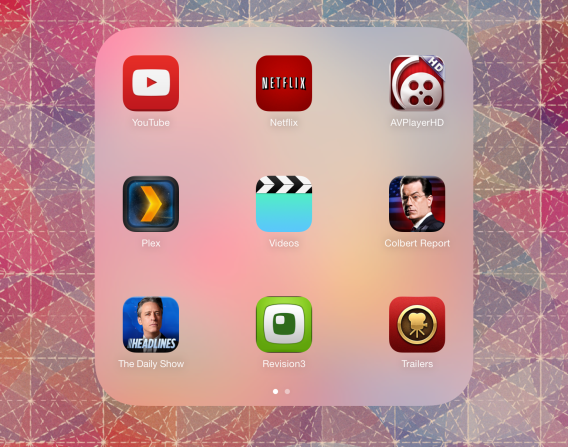 One constant that remains is the grid system for apps and folders. Apple did update folders to allow for more than nine apps per folder by adding multiple pages within folders. It can still get confusing with a lot of apps within one folder, but at least now you can have all your games in one folder as opposed to them being spread out among many folders. Folders are designed better for smaller screens but as shown above, folders on iPad have a lot of unused space.

In 4.0 (Ice Cream Sandwich), Android introduced the Holo design scheme to give a uniform look to the operating system. This continues in 4.3 with the Roboto font being applied in more third party apps. But if the stock launcher isn’t your preference, you can install a third party launcher to change the visual look. There are full themes like KakaoHome and Facebook Home that dramatically alter the interface on the Android device. 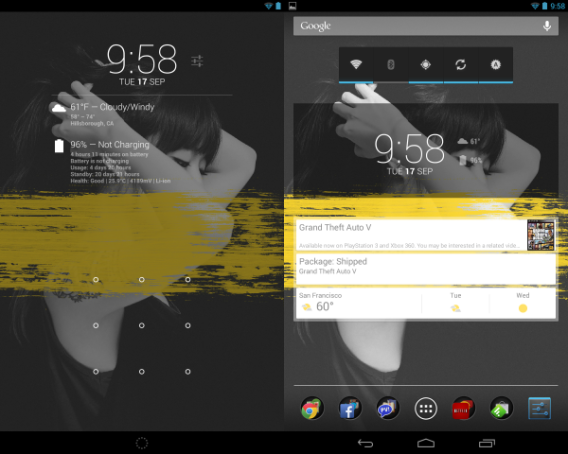 There have always been more options for customization in Android than iOS. The ability to place apps and widgets on multiple homescreens is great. Widgets is one place where Android is better than iOS. Granted, a lot of widgets are useless, but the Google Now widget is an excellent source of information if you use a lot of Google services on any platform. 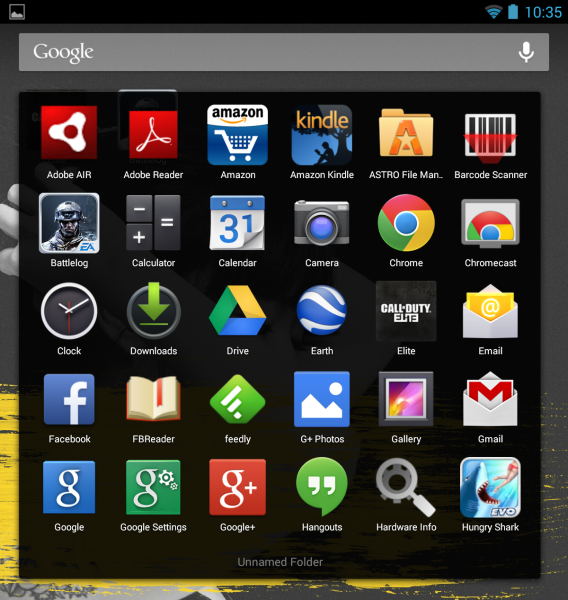 Android 4.3 features folders as well. But instead of swiping through pages, the apps are set in a grid inside the folder. While this can lead to overcrowding in one folder, it does allow for more apps to be added. Another positive is that Android allows for a huge level of minimalism. If you don’t want apps on your homescreen, it’s not required.

Notifications through the Notifications Center were introduced in iOS 5. The usability of notifications is still a little stunted because it’s more about information. Interaction is limited because it will open the corresponding app, but you can’t do much else but dismiss it in notifications. Depending on how many apps you allow to provide notifications, they can get filled quickly. 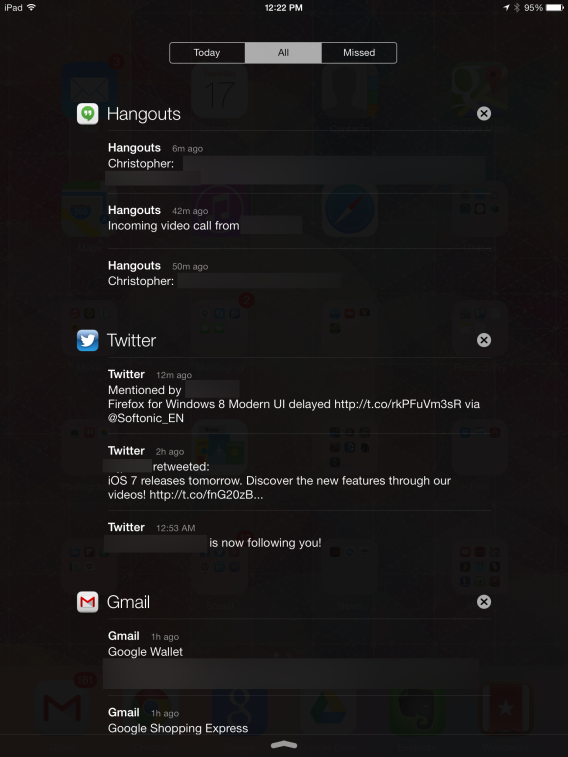 A positive is that scheduling events is shown through the connected Calendar app and notifications are quick to display. Customization of alerts can be shown through a banner at the top of the screen or a centered alert. Having notifications available in the lock screen is a great feature to quickly view alerts as well.

Apple is still playing catch up to usability with notifications because unless it’s built into the OS like sharing on Twitter, the company doesn’t want to open the OS for full third party control.

Notifications on Android have become a very easy way to quickly interact with connected apps. The best integration comes from Google apps obviously, but social networks like Twitter and Facebook have improved over time. 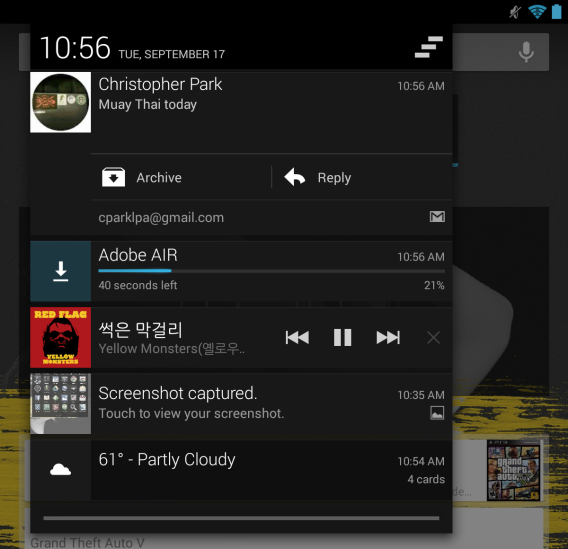 It’s rumored that Android will fully open to allow third party apps to utilize notifications for more actions within the menu rather than opening the app. Android 4.1+ devices support Google Now and the notifications supplied by this part of Google Search are very helpful by offering package tracking information and flight status.

Android currently has the lead in notifications and they will become a bigger part of mobile operating systems. It’s much easier to see a quick message than constantly opening an app for updates.

When I first saw Control Center in an early iOS 7 Beta, I was confused. The new set of icons weren’t exactly clear of the purpose, specifically the timer. But bringing the most common settings in an easy to access menu is smart for all users. Being able to toggle airplane mode, Do Not Disturb, or screen rotation is more helpful than opening the Settings app and selecting the different options.

It’s questionable why Apple put audio controls within quick settings though. It’s strange because the controls are persistent, even when there isn’t any music playing. If the decision for persistent settings was made to keep a constant design scheme, then I guess it works, but otherwise it looks like a waste of space if nothing is currently playing. App developers will have to make sure that the upward and downward swipes are tested so that they aren’t activated on accident for notifications and Control Center.

But at least iOS users can now toggle common settings much faster.

Looking at my Android tablet, it’s funny that I don’t use the quick settings menu in Android 4.3, but actually use the widget to toggle different settings. A big difference between Android quick settings is that it only focuses on system settings and not other apps which is left to the notifications menu. 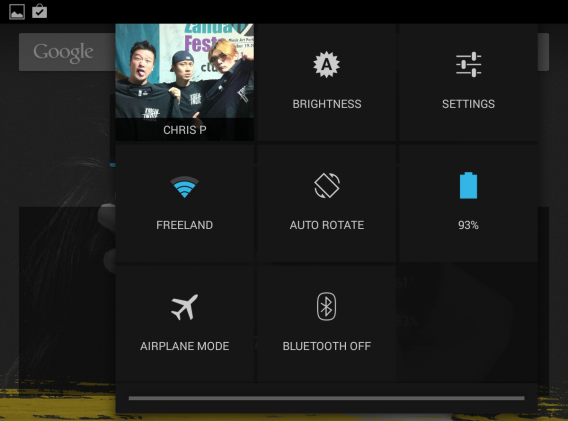 You can control brightness, Wi-Fi, rotation, and airplane mode among others. There is also access to settings in the menu if you need to change other settings.

Generally, quick settings is a useful part of Android, but since you can just use a widget to access the same common options, it’s not detrimental to not use the pull down menu.

The new updated security option in iOS 7 is a fingerprint scanner built into the iPhone 5s. This will allow you to use your finger to unlock a device. Previously the only software security option was a passcode or password for iPads. Even with Find My iPhone, Apple’s on-device security options aren’t as robust as they need to be.

It’s unknown if there are ways around the new fingerprint lock, but as soon as new devices are in the hands of the iOS development community, there may be workarounds that Apple will have to patch.

In Android 4.3, there are multiple options for security. While some of them are simple screen locks, others like the Face Unlock, Pattern, Pin, and Password offer different ways to secure your device. The rollout of Android Device Manager also allows you to remotely wipe your device if it’s lost or stolen, but for on-device security, Android does offer slightly more options. 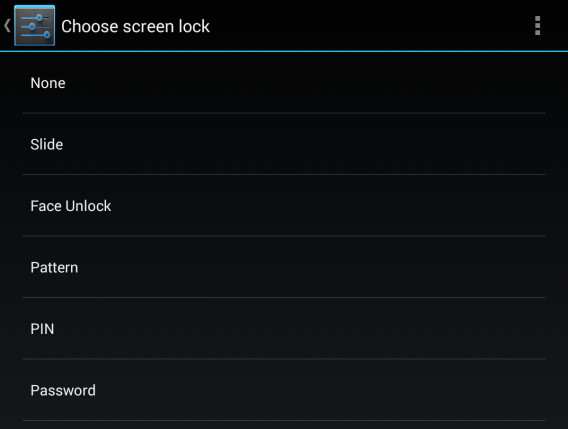 A matter of personal choice

iOS 7 may be a visual update, but it retains the core of past versions. There are a lot of backend improvements as well to improve the user experience. While some of these may not be immediately obvious, they should improve how iOS works for you.

Android continues to refine the operating system introduced in Android 4.0. As Android hasn’t moved past its “4” designation, Google doesn’t see the updates its presenting as worthy of changing the entire version number. Android 4.4 KitKat is on the horizon and Google is actively combating existing fragmentation with Google Play Services.

While it was easy to argue for or against either operating system before, at this point the two offer relatively the same core experience to productivity, utility, and communication. The finer options that are exclusive to the relative OS aren’t as big of a deal as they were before.

Whether you choose Android or iOS at this point, you’re going to find the options available suited to your needs.

If you’re still undecided, read our guide on iOS 7 and Android: Everything you need to know round-up.