What is the best browser for Android ? We compared the most popular to see which of them is best suited to your needs.

The browser is perhaps the most interesting app on our mobile device. We use it to read news, find information, play games, and download files. Along with messages, calls, and maps, we spend most of our time on our mobile devices using a browser. As a slow or inefficient browser negatively affects our experience, it’s important to choose one that boasts high performance and best meets our needs. But this is not an easy task. 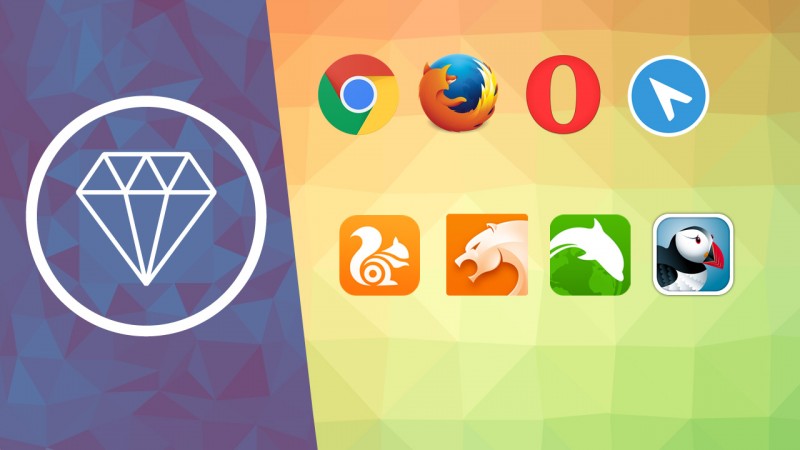 There are hundreds of browsers for Android. Which is the best?

There are more Android browsers than ever before. All the big names have a browser on Google Play – all except for Microsoft’s Internet Explorer. And while some have more than a 30% share of the market, others have been downloaded less than one million times. Through this comparison, we want to help you choose the browser that suits you. To do this, we applied the same philosophy as in our browser comparative for Windows, with tests focused on everyday use cases.

For this test, we chose the most popular browsers on Google Play. Aside from the big names (Chrome, Firefox, Opera, and Opera Mini), we also included some notable independent browsers: UC Browser, Dolphin, Puffin, CM, and Javelin, all of which use existing technology, but offer various different features and enhancements.

Chrome Browser: the one to beat

While Chrome may be Google’s official browser, it’s not always offered as the default on an Android device. Chrome’s popularity is undeniable: it is in installed on almost all mobile phones and tablets, but only if you use Android 4.0 or higher. The highlight is the data synchronization between different devices running Chrome (if you are signed in). 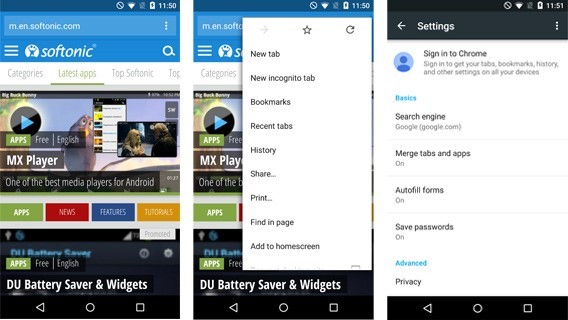 Chrome has the (unfair?) advantage of being a Google product

Opera was one of the first browsers to appear on mobile devices, and this experience is demonstrated in the quality of its features. There are different versions for Android, but the latest is the redesigned Opera Mini. In this comparative, we analyze both the regular version and Mini, because they meet different needs. 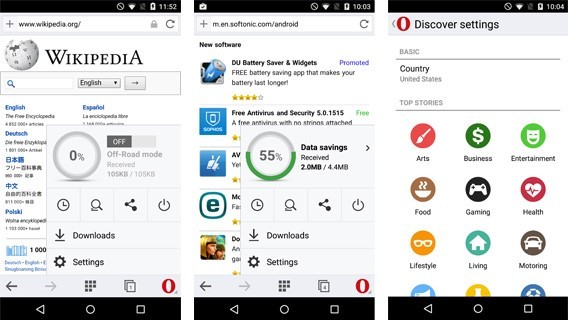 Compatible with: Android 4.0 or higher (normal) and Android 2.3 or higher (mini)

While the Mozilla browser may have only recently arrived on Android devices, it already has a lot of fans. It uses a different technology base to other browsers (for better or for worse). With its extensions and tools, Firefox has all the necessary components to compete with Chrome and Opera. 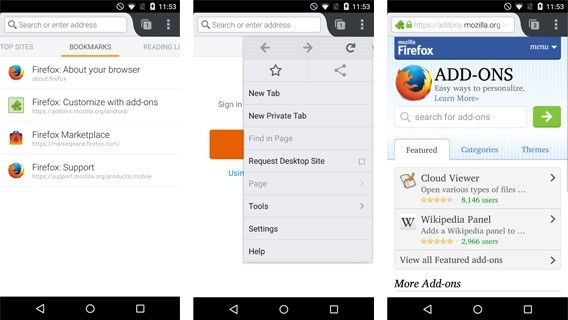 Compatible with: Android 2.3 or higher

Outside the big names, the most downloaded browser for Android is UC Browser, which is available in different versions. Here we analyzed the standard version, which comes with unique features, such as a night reading mode and themes. It is one of the only browsers that supports Flash. 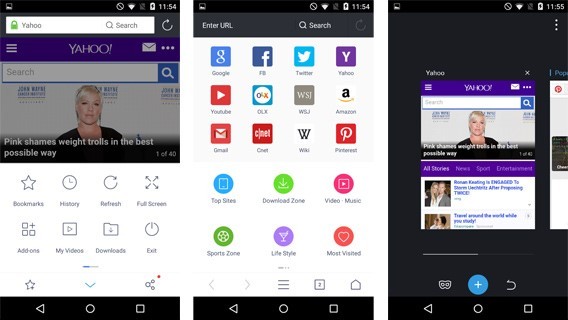 UC Browser is well designed and includes lots of tools

Compatible with: Android 2.2 or higher

Dolphin Browser: what Chrome could have been (but isn’t)

Dolphin Classic, one of the first alternative browsers for Android, it is stable, attractive, and has a variety of plug-ins and customizable themes. If you install Dolphin Jetpack – which is entirely optional – you can enjoy playing games on the web in the highest quality possible. 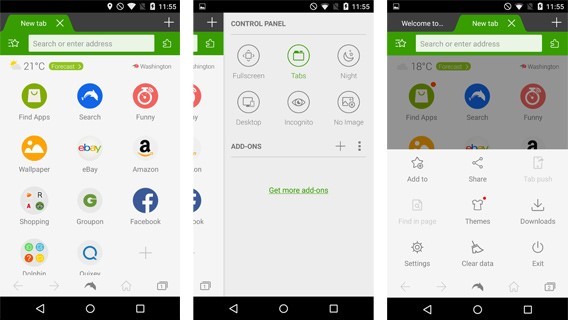 Extensions, data synchronization, support for Flash… Dolphin has it all

Puffin Web Browser: for those addicted to Adobe Flash

Better known on iOS, where it is used as a method of running Flash, Puffin is a fast browser which has been optimized for open source web games. It even gives you the option to activate a virtual trackpad, as if you were using a laptop. The free version has ads that appear from time to time, but you can still use it with few limitations. 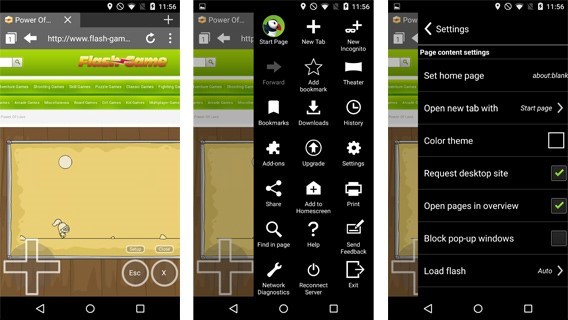 Puffin opens web pages in the same way as on a PC, including flash animations

Compatible with: Android 2.3 or higher

The developers of Clean Master have release their own browser, or rather their own version of Chrome, as the technology behind both is the same. CM Browser emphasizes safety and privacy when browsing: it scans downloads with its excellent integrated antivirus program, as well as blocking dangerous sites. 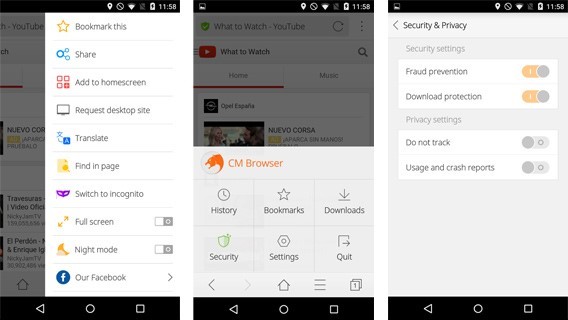 CM Browser’s strength is its security, with its integrated antivirus program being one of the best around

Javelin Browser: the most promising and original

Javelin is a browser unlike any other. Softonic editor Sam chose it as his web browser of 2014 for its unconventional design and reading mode, something found in very few of its competitors. Using this browser is like entering a parallel universe. 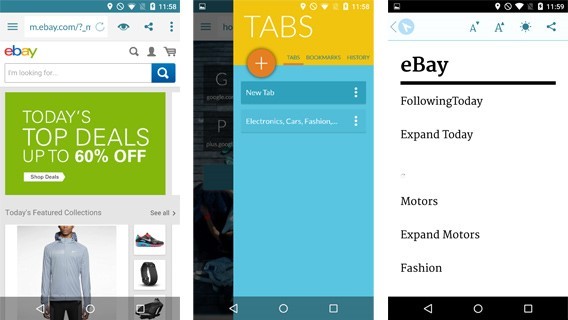 Javelin is not like any other browser we tested

Compatible with: : Android 4.0 or higher

How lightweight and powerful are the nine browsers in this comparison? We tested browsers on a Nexus 5 with Android 5.1 installed. Before starting the test, we restored the Nexus to its factory settings. We used versions from April 14 2015.

For the tests measuring memory consumption, we used the Android Apps Settings panel. The five tabs loaded as part of the test were Google.com, Yahoo! Weather, eBay, Reddit, and Softonic. The SunSpider and Browsermark benchmarks were carried out after deleting the browsing history, with the Nexus plugged in. 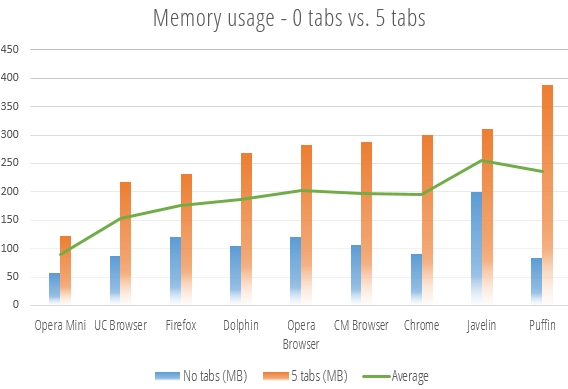 The best browser in terms of memory consumption is Opera Mini. The new version barely went above 100 MB, even with five tabs open. This was followed by UC and Firefox. Brining up the rear was Puffin, which by default opens the pages in PC version. The memory consumption of the browsers powered by the WebKit software engine(Chrome, Opera, Dolphin, and CM) is pretty similar.

The benchmark, on the other hand, yielded conflicting results, and some tests had to be repeated several times due to unexpected crashes (that was the case with both Dolphin and Puffin). We were unable to test Opera due to its compression technology, which prevented us carrying out the load tests.

The highest scorers are marked in dark Green (for Sunspider, lower is better. For Browsermark, higher is better)

As you can see in the table, browsers that use the WebKit engine, led by Chrome, took first place in the Browsermark benchmark. In the SunSpider test, Puffin took first place, followed by Firefox. When considering the four tests, the browsers with best performance and memory consumption were UC Browser, Firefox, and Opera.

What can they do?

How well each feature works is really important in a mobile browser. Do you read a lot? Then a reading mode (night or not) will come in handy. Do you visit pages using Flash? Not all browsers load this content. Each browser has its specialties, and some try to cover everything.

Dolphin Browser and UC are the two most comprehensive browsers in terms of features. Dolphin, in particular, provides everything you can find in a browser for Windows. They are followed by Firefox, the only major browser with support for extensions and themes. Chrome pales in comparison, with relatively limited features.

And the winners are …

We had a long discussion about which browsers to choose as the winners of this comparison. In the end, we decided to reward the most complete and lightweight browsers. The overall winner is the one that had a good balance between the two. Thus, if your priority is a lightweight browser over a powerful one – or vice versa – then we have the perfect options for you.

The most complete: Dolphin Browser

Dolphin not only has everything you could ask for, but also offers elegant integration no matter what device you are using. As well as support for Flash, it also has impeccable data synchronization, lots of add ons, and a Web App Store. True, it doesn’t have the best performance, but it’s the best browser for powerful tablets (and games look great with the Jetpack mode). 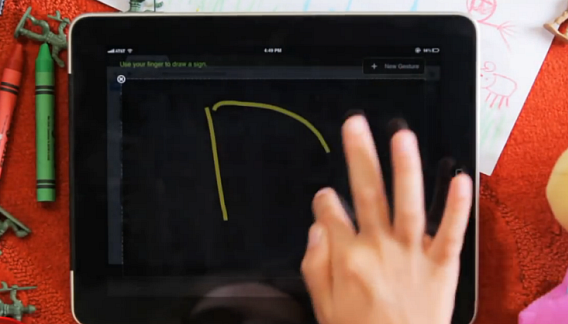 The most lightweight: Opera Mini

Hundreds of millions of people surf the web with slow connections and under-powered mobile devices. Opera is the only company that has taken this into account. Opera Mini 8 has modern features, but is more lightweight and efficient when consuming data. Even if you don’t have access to high-speed internet, this browser is still impeccable. 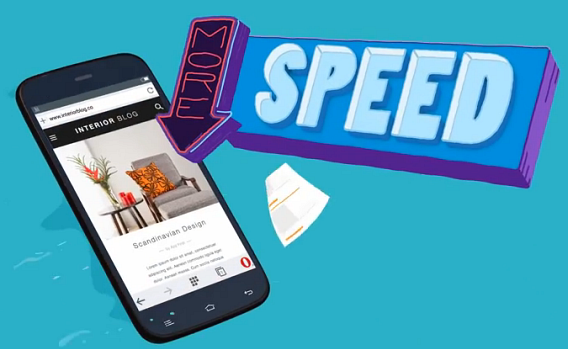 Of all the browsers we analyzed, Firefox had the best design with its clean interface familiar to those who use the browser for PC and Mac. It doesn’t overdo it, nor does the design get too abstract. 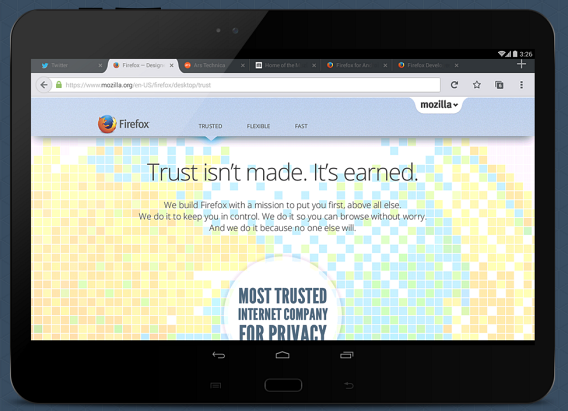 As for performance, while Firefox does not stand out in the Browsermark test, it does in the Sunspider one. Firefox also has the third best memory consumption, second only to UC and Opera Mini.

Finally, Firefox is open source and, thus, independent. It is independent of large corporations (such as Google, Microsoft, and Apple) and it doesn’t have any corporate sponsors (which is common in alternative browsers).

In short, if you want a solid and elegant alternative to Chrome, choose Firefox. Although don’t forget about Opera Mini and Dolphin, which both meet specific needs.

What browser for Android do you recommend?

Top 25 apps for your Android tablet