‘Cats’ trailer proves some things should not be filmed

Andrew Lloyd Webber is not for everyone. While capable of the occasional earworm, his musicals are usually long slogs punctuated by one or two moments of enjoyment.

If that’s your cup of tea, you’re probably overjoyed for the upcoming live-action “Cats” movie. The trailer was released today:

The entire thing looks like a badly digitally animated video game cutscene run through some sort of face-swap app. The all-star cast features people who will probably regret this very soon.

Here’s Dame Judi Dench as Old Deuteronomy, hoping this will somehow top “The Chronicles of Riddick” as the weirdest film in her resume:

Sir Ian McKellen must need a lake house, so he signed on for the paycheck as Gus The Theatre Cat:

Idris Elba is here as Macavity, which should negate any goodwill he built up as Stringer Bell:

Jennifer Hudson once scream-sung her way to an Oscar, so maybe she can snag another as Grizabella:

And it only gets weirder. Here’s Taylor Swift as Bombalurina:

And in case this trailer didn’t grate on your nerves enough, we’ll cap it off with James Corden as Bustopher Jones:

The film was directed by Tom Hooper, who took the reins of the very hit-or-miss 2012 version of “Les Misérables” with Hugh Jackman (good!), Russell Crowe (bad!), Anne Hathaway (Oscar-winning!), and Amanda Seyfried (should never sing again).

Early YouTube reaction harkens back to the disaster of the “Sonic the Hedgehog” trailer: 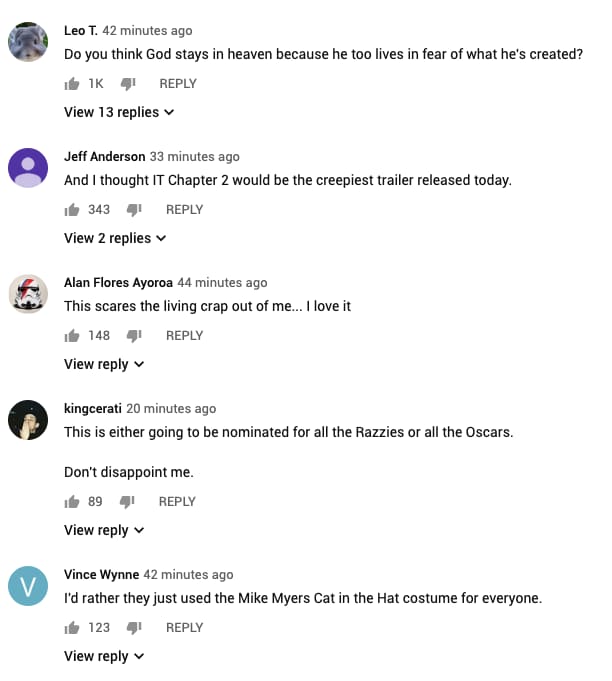 The movie looks awful, but the memes will be glorious.