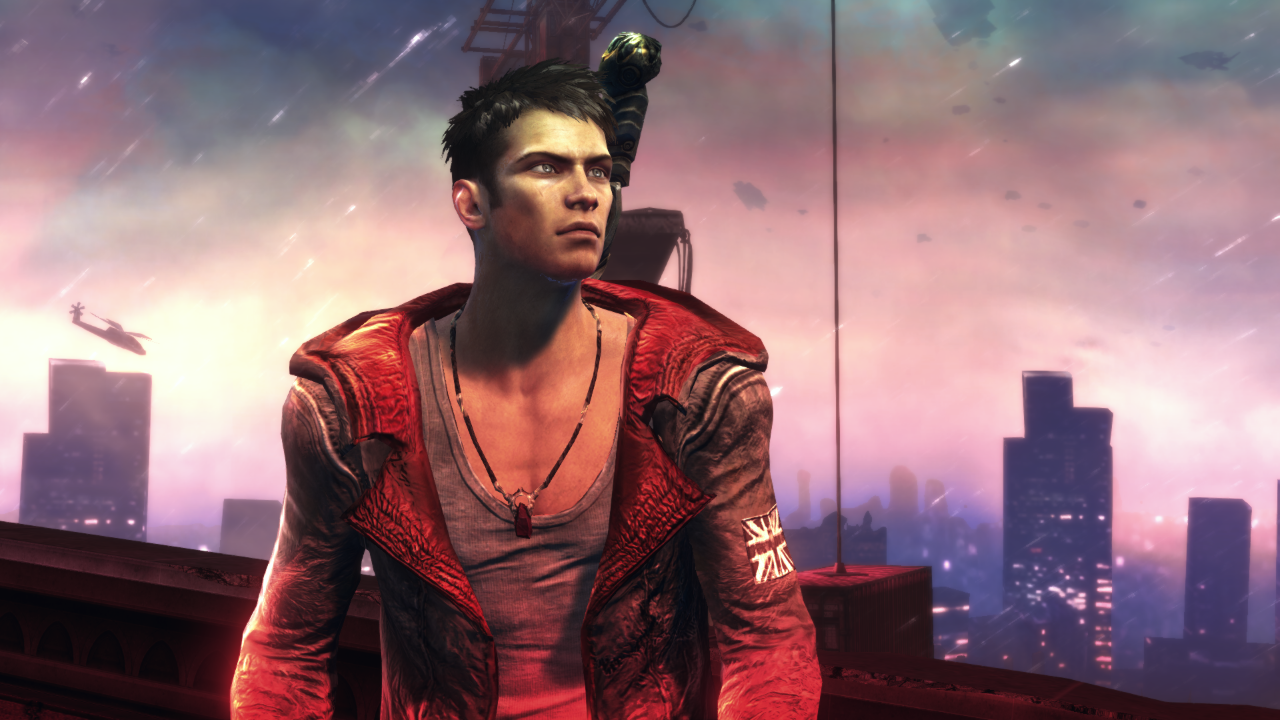 The original Devil May Cry was one of the hardest games I ever played. It required precision control to string together huge combinations against swarms of enemies. But it was also the last Devil May Cry I played. Sequels were released every couple years, but I didn’t find a reason to go back.

DmC Devil May Cry: Definitive Edition is Ninja Theory’s reimagination of the Devil May Cry universe, telling the story of Dante and Vergil, the two Sons of Sparda. While not part of official canon, DmC provides a compelling plot between Dante, who lost his past, and Vergil, who holds his own secrets.

DmC Devil May Cry: Definitive Edition is a re-release of the 2013 game running at 1080p and 60 fps for PlayStation 4 and Xbox One.

An average story with an expected twist

The overall plot of DmC Devil May Cry: Definitive Edition is about Dante learning about his past with the help of Vergil and Kat, a member of The Order (who are directed by Virgil), attempting to kill the Demon King Mundus in Limbo City. 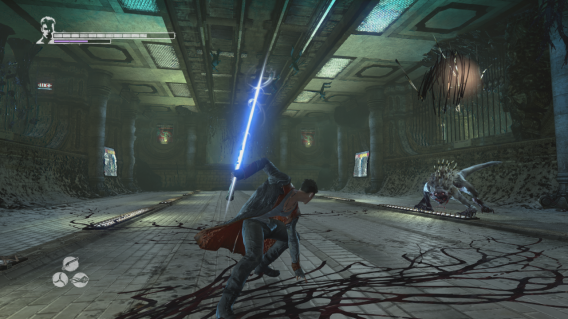 The story plays out through missions that add to Dante’s backstory. DmC’s story is surprisingly interesting even if the dialogue is kind of stupid. But with stupid dialogue comes some of the best voice acting I’ve heard in a long time. You can actually feel emotion in the voices and the lip-sync convinces me these people actually speak English.

Be Sadistic and feel good about it 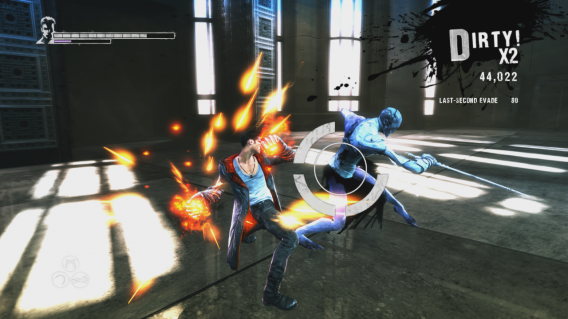 The first Angel weapon Dante gets is Osiris, a scythe, and his first Demon weapon is Arbiter, a giant axe. Later in the game, you get access to Eryx, a Demon powered pair of gauntlets and Aquila, a pair of disc blade projectiles. Dante also gets access to Revenant, a shotgun, and Kablooey, a grenade launcher you manually detonate.

You switch weapons with the directional pad so you never pause and open a menu. A problem is that once you get a new weapon, there is little reason to use an old one unless you’re trying to get bigger combos.

Each weapon has an upgrade tree. Buying new skills opens up potential for longer combos or charged attacks. Dante’s guns can also be upgraded, but I forgot about using them once melee weapons were upgraded. When you get Dante’s Devil Trigger power, it’s gives more attack power, but it’s more useful for regenerating health during hard battles.

If there’s one requirement to be successful, you have to have the controller buttons memorized. Button combinations require absolute muscle memory.

There are also platforming tools that use Angel and Demon powers. Angel mode pulls Dante toward platforms or can pull himself toward enemies and Demon mode pulls enemies or platforms out of the levels. These pull tools are used in combat to continue combos or to grab flying enemies.

DmC Devil May Cry: Definitive Edition is focused on combat, but the platforming can be a little confusing. Some levels are straightforward start-to-finish, but others require timing or careful jumps that DMC has trouble explaining. 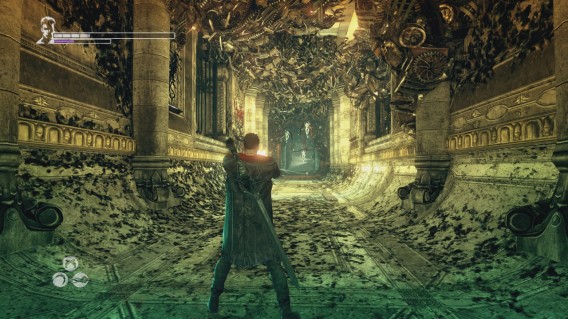 One big problem with DmC is the camera. It works well when moving between fights but the camera gets stuck in the worst positions during fights, blocking sight of other enemies or the edge of platforms.

Your goal is to chain combinations against groups of enemies. The bigger a combo gets, the higher your ranking will be. At the beginning of DmC Devil May Cry: Definitive Edition, you’ll be lucky to get C rankings because you’re stuck with a sword, two guns, and a limited combo system. By the time you get halfway, you’ll have Osiris and Arbiter and stronger enemies who require strategy and skill to defeat.

Once you finish the campaign for DmC Devil May Cry: Definitive Edition, you can replay it on a harder difficulty level while keeping all your existing upgrades. Higher difficulties “remix” enemies and depending on the difficulty level, Dante can die in one hit.

There’s also a survival mode called Bloody Palace. You earn time by quickly killing all the enemies and chaining together long combos. It’s great for training and a quick pick-up-and-play mode.

DmC Devil May Cry: Definitive Edition includes Vergil’s Downfall DLC. This shorter campaign explains what happens after the main story ends. Since you play as Vergil, you use his Yamato katana and summoned swords as projectiles. 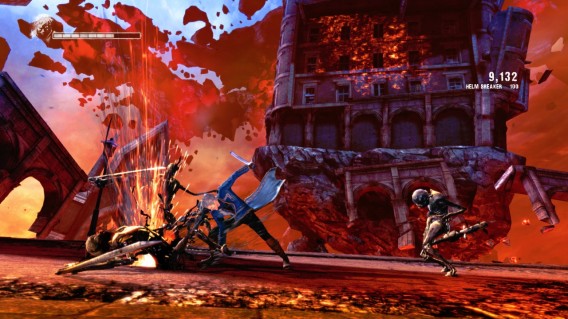 Vergil plays much different from the agile movements of Dante. Vergil is able to pull enemies towards him like Dante, but his moves are limited. You can still create long combos, but the switch takes a level or two to adjust. Vergil’s Downfall is a nice bookend to the Definitive Edition.

As an enhanced port of a PlayStation 3, Windows, and Xbox 360 game, DmC Devil May Cry: Definitive Edition has an uneven level of detail.

Dante, Virgil, Kat, and enemies have a high level of detail. Secondary characters like Mundus are mixed. Lighting effects look unoptimized in certain levels. There’s a definite issue with lighting because it looked like a pixelated shadow over the faces of characters.

The levels look good, but get close to a wall and you’ll see low resolution textures. Brick looks like paper and floors looks like paint. Most of the time you’ll be moving or fighting so it’s not a huge distraction. Basically if you stop to look, you will get disappointed. It’s more obvious when you’re in the real world and not Limbo. Limbo is able to hide textures by not surrounding you in tight areas. 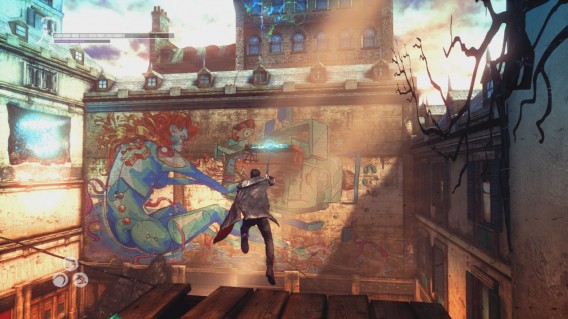 DmC Devil May Cry probably looked really good on last generation consoles, but the uneven graphics on PlayStation 4 was a little disappointing.

Get it if you missed it

Ninja Theory successfully reimagined the Devil May Cry universe. The combat system stays true to the original and the precise control to switch between weapons and extend combinations is perfect.

An added bonus is that DmC’s story is compelling enough to make you want to continue playing. The first playthrough can take a couple afternoon sessions and Virgil’s Downfall DLC can be finished in one session. 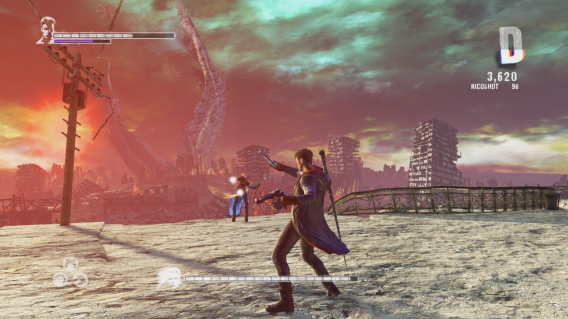 But try playing DmC Devil May Cry: Definitive Edition on a harder difficulty or in Turbo Mode, adding a 20% speed boost, and it feels like a different game. There’s a lot of replayability in DmC Devil May Cry: Definitive Edition. If you missed the original release two years ago, it’s a recommended purchase. You may have forgotten how unforgiving the series can be, but this will remind you very quickly.