With the release of Google Play Music All Access the music subscription market has become even more crowded. Google might be a big name, but other services such as Spotify and Rdio are already popular. Does Google Play Music All Access (GPMAA) have what it takes to compete with these other choices? They each offer different prices, amount of songs, offline modes, and more. We’ll compare GPMAA, Spotify Premium, and Rdio subscriptions to see who’s best at what.

Price and what it gets you 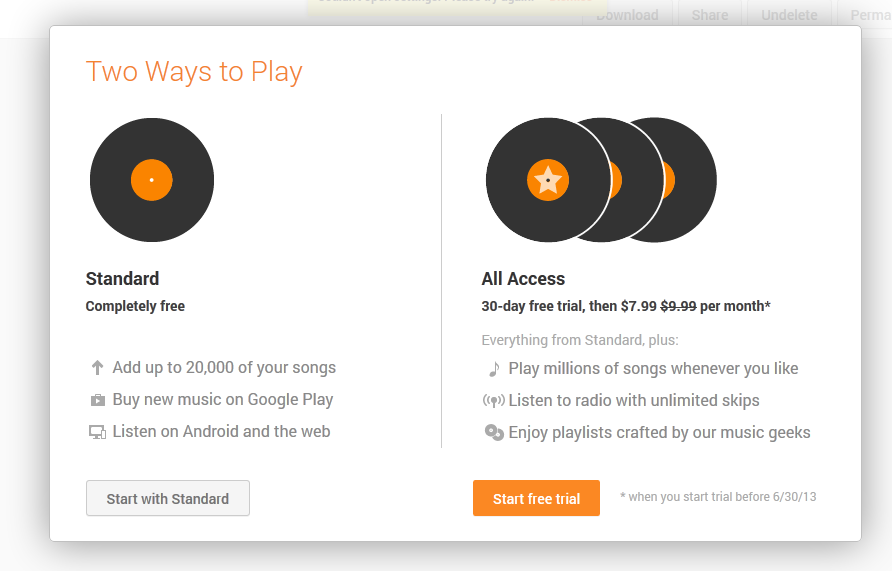 Obviously a subscription is going to cost you some amount of money. Rdio and Spotify have several tiers of subscription, while GPMAA only has one at the moment. GPMAA costs $9.99/month, but those in the United States (The only location it is currently available) that sign up by June 30 will have a special discount at $7.99/month. It’s worth noting that Google Play Music allows 20,000 song uploads even with the standard free version.

Even when free, Spotify offers unlimited songs on your computer but with periodic ads. For $4.99/month users can remove ads, and for $9.99/month they can go to Premium which includes unlimited mobile streaming and the ability to download music for offline listening. Spotify also has a 30 day trial for the $9.99/month Premium service. 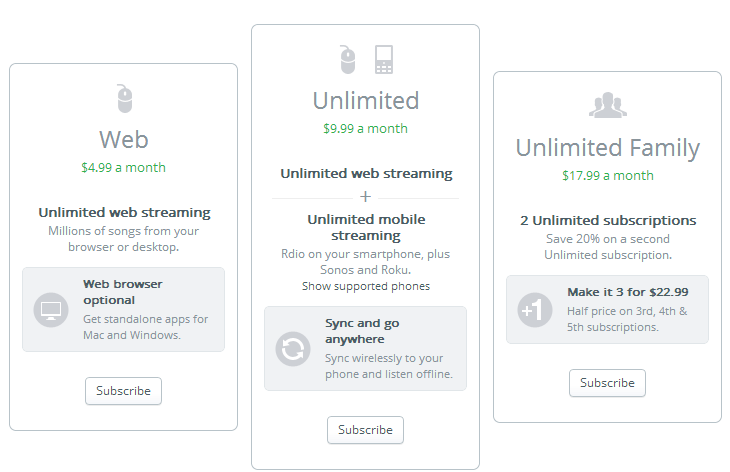 Rdio has three subscription types. Web at $4.99/month allows unlimited streaming on your computer through the web or desktop apps. Unlimited at $9.99/month grants unlimited streaming on both web and mobile (this also opens up syncing to mobile for offline listening, covered later). Last, Unlimited Family grants the previous features to two users for $17.99/month, or three users at $22.99/month.

The prices are all pretty similar to each other, so it’s really a matter of what you receive for the cost. Unlimited streaming and syncing for offline on mobile makes Rdio stand out. If you happen to have two friends, the Rdio Unlimited Family subscription has quite a financial benefit. On the other hand you could also adopt GPMAA now to get a great discount.

Both Spotify  and Rdio libraries contain more than 20 million songs, while GPMAA lags slightly behind with 18 million. That’s still an impressive amount of songs, and GPMAA includes major artists not on Spotify, such as Pink Floyd. GPMAA and Spotify also allow you to listen to your own personal library of songs, a feature Rdio lacks. 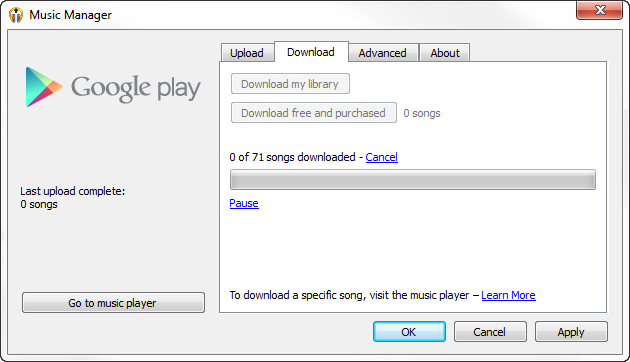 Spotify Premium does this by syncing songs on your local hard drive for playback. GPMAA on the other hand actually uploads music files to cloud storage, allowing download of those songs on other computers you log into (a maximum of ten). You can store up to 20,000 songs, each song being a maximum of 300 megabytes. This is a huge advantage for anyone who uses multiple computers and will want to transfer their collection elsewhere. Keep in mind files you download from the cloud are high quality MP3s, easily accessible on computers but slightly more hidden on mobile devices. 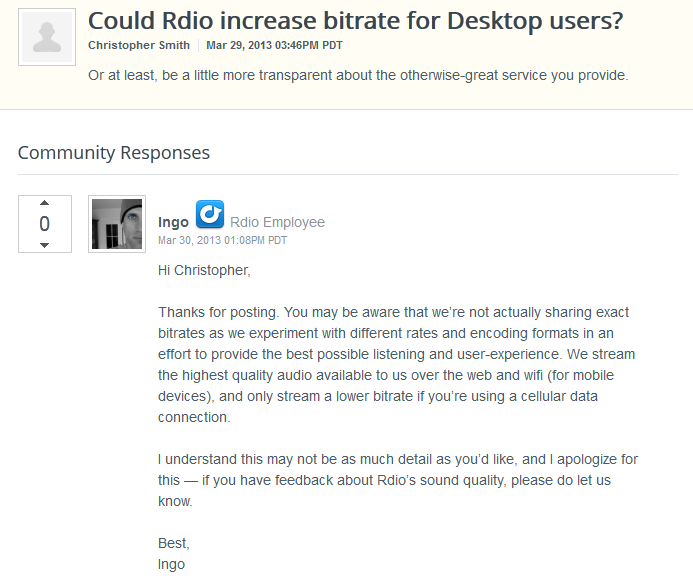 Both Spotify Premium and GPMAA cap sound quality at 320 kbps (Free Spotify accounts cap at 160 kbps), while Rdio hasn’t released exact bitrates as they experiment with encoding. All of these services can lower the bitrate if you are a slow connection or using wifi. In Spotify you can also manually lower the stream quality. At the moment Rdio’s secrecy makes it likely that their bitrate is lower than their competitors, putting it at a grave disadvantage.

A big draw to streaming music is being able to listen to it anywhere you go. Each of the three services offers different supported apps. 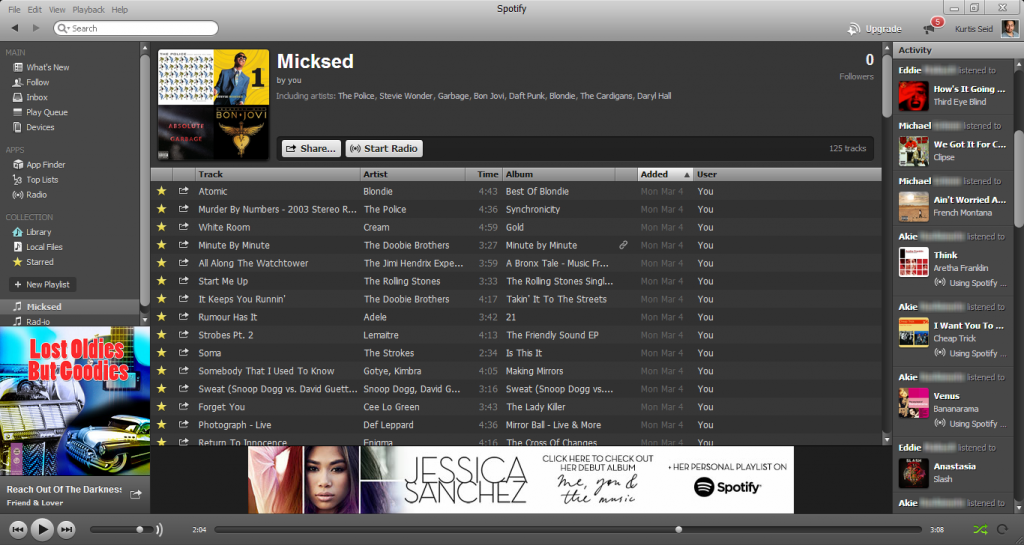 Spotify Premium finds its home primarily on the desktop app for Windows and Mac. There is also a web app, but it is currently in Beta and has minor issues (such as not being able to play your entire library or quickly sort playlists). Spotify Premium has mobile apps for iOS, Android, and Windows Phone. There is no official BlackBerry support at the moment. 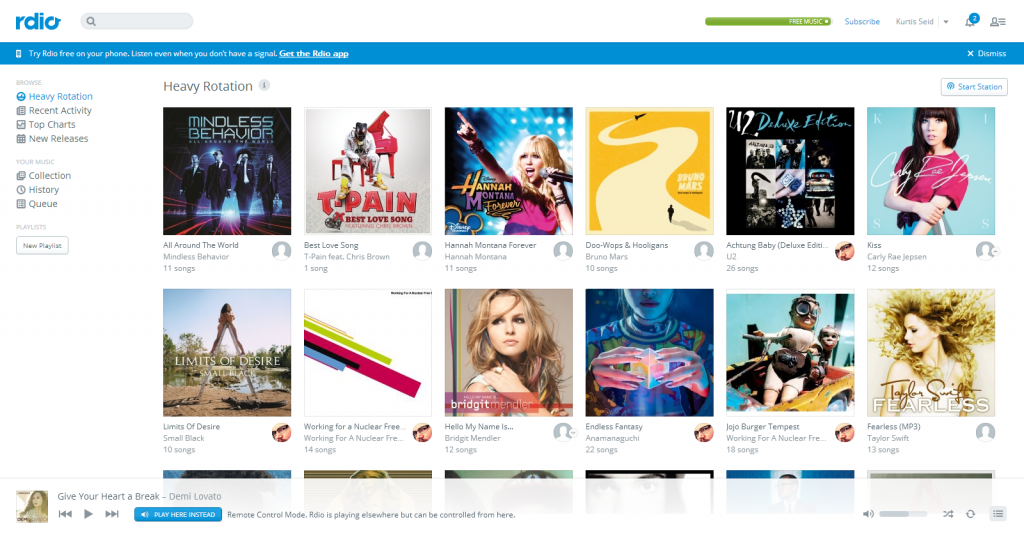 Rdio Unlimited is accessed primarily as a web app, but there are desktop apps available for Mac and Windows. The service also has mobile apps on iOS, Android, and, Windows Phone. It also has a BlackBerry app, but not all devices work. 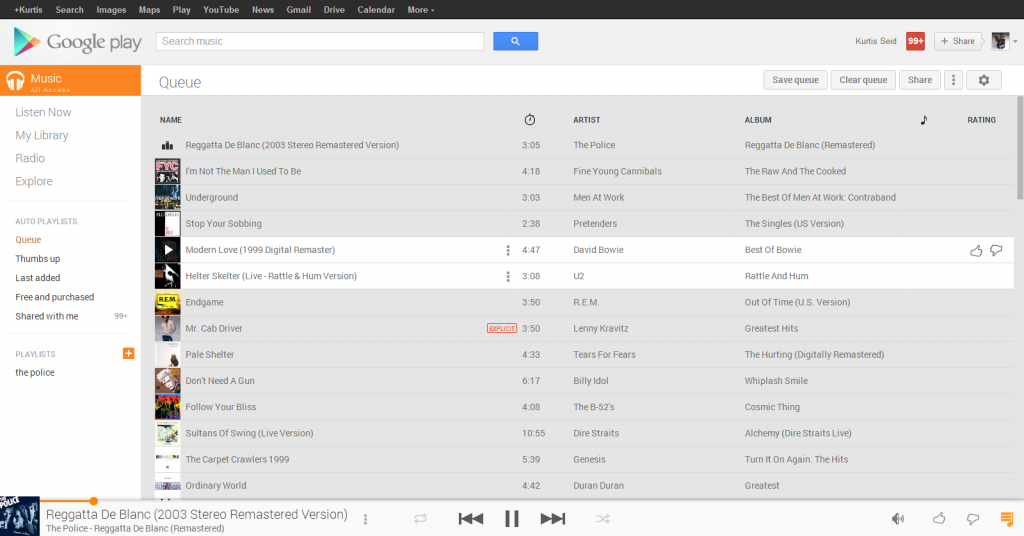 Finally, GPMAA is only currently available on the web and as an Android app. iOS support will arrive later, but for now there are already developers submitting independent apps to the iTunes App Store.

The app selection is slightly in favor of Spotify where it has a strong desktop client, can be accessed from the web,  and has apps  on multiple mobile devices. It only lacks BlackBerry support, which Rdio may cover.

You’re not always going to have a stable internet connection when you want to listen to your music. Each service has their own approach to offline music. 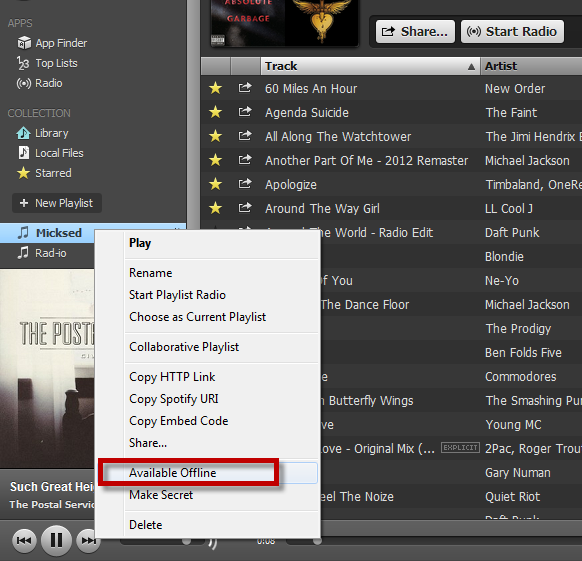 Spotify Premium is fully ready to go offline on computers, iOS, and Android. Up to 3,333 songs can be taken into offline mode on up to three devices. The offline songs last for 30 days, after which they must be reconnect to verify their authenticity. 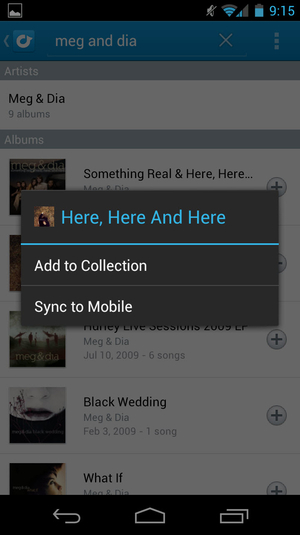 Rdio Unlimited can sync songs to mobile devices. The limit simply depends on your device’s amount of storage space and there doesn’t need to be a re-sync as with Spotify. However, Rdio cannot be taken offline to your computer, even if you have one of the desktop apps installed. 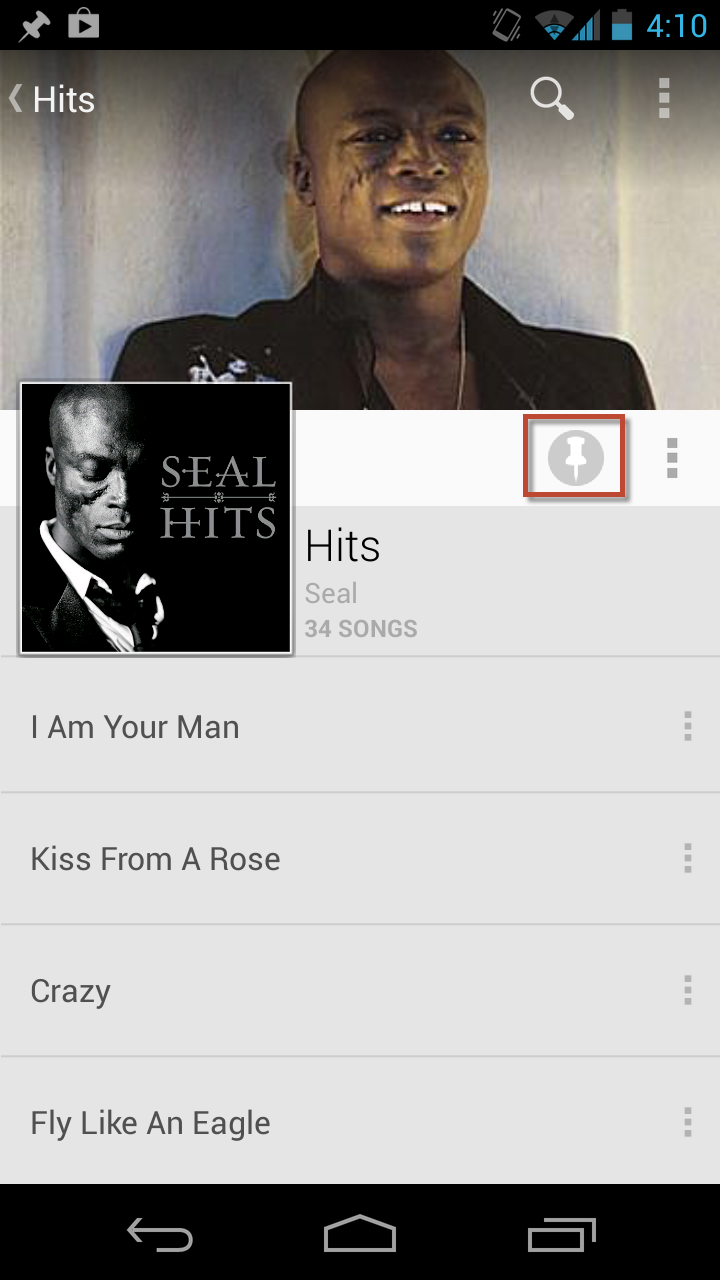 GPMAA can pin albums and playlists to the Android app, allowing offline listening on the go. There is currently no offline listening for the web version of GPMAA, but considering the ability to download from the cloud, the feature could arrive in the future.

At the moment Spotify’s ability to take so many songs offline at a time makes it top of the heap. However, it would be even better if there wasn’t the 30 day restriction before having to reconnect.

One of the key features of Spotify is its ability to connect users and share music with each other. Rdio also has a set of social features, while GPMAA is nearly stand alone  – there is no way to follow playlists or spy on other users (Though you can share songs to Google+). 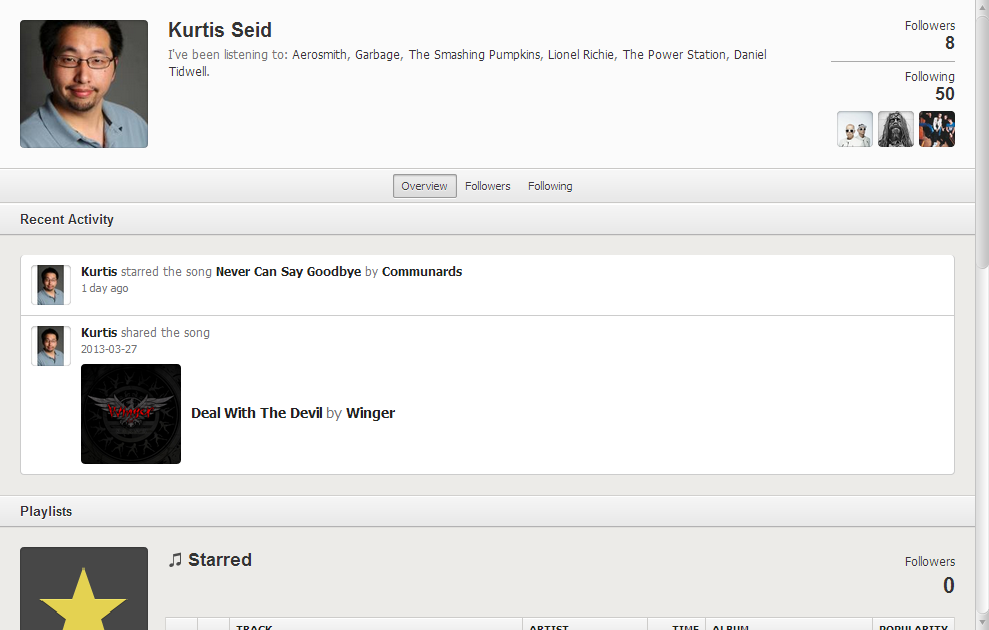 Spotify claims that they have 24 million active users, 6 million which subscribe to Spotify Premium. The high amount of users is important as you can follow others, check out what they are listening to, and follow user playlists. You can also share songs to Twitter, Facebook, Tumblr, or directly to other Spotify users. Since Spotify used to have heavy Facebook integration, it’s likely to find a few friends that have Spotify accounts. 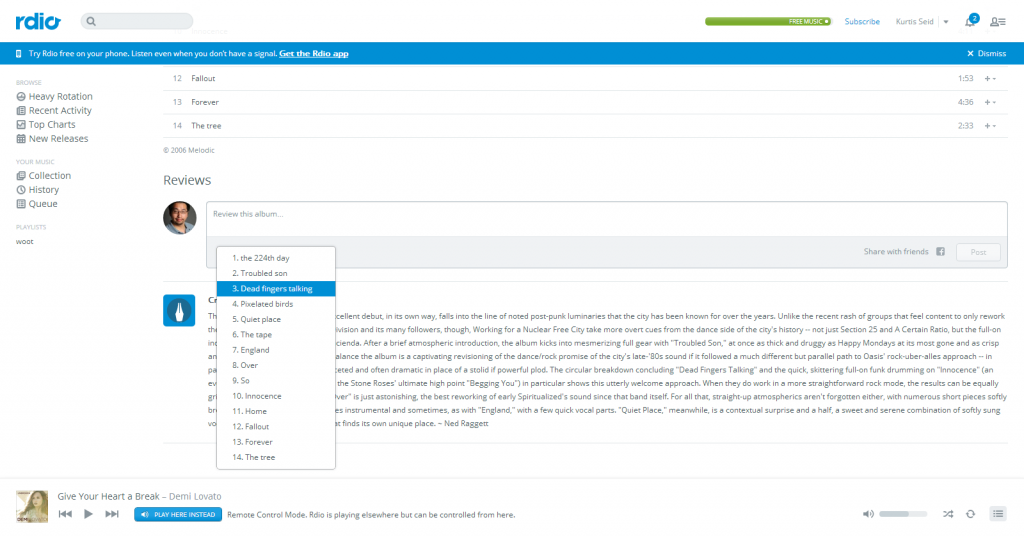 Rdio hasn’t released their exact amount of users (they were hush about their bitrate after all), but they still have a wealth of social features such as viewing friends, check what they are listening to, and the ability to browse their collection. A nice touch is that users can write reviews for whole albums or individual songs, which Spotify could certainly adapt. As with Spotify you can share songs to Twitter, Facebook, or other Rdio users (You can’t share to Tumblr, though).

So which one is right for me?

So we’ve laid out aspects of these three services, but now it becomes a question of which one you should subscribe to. The three of them are very different programs, so it comes down to personal taste. We’ll summarize both the reasons you should pick each of them, and the drawbacks.

Do you prefer high quality sound files, online storage, offline capabilities, multiple app support, or social interaction? We’ve given you the reasons you should and shouldn’t use each music service, now it’s your choice to decide which is best for you.