The idea of a new internet goes beyond being a key plot point in “Silicon Valley.”

With data breaches, ISP monopolies, and the whole fake news trash fire taking over the digital space, it’s understandable that one might want to hit delete on the whole internet.

We technically have the technology to make a new internet. It’s here, and chugging along like a clunky prototype. But the point is, we could pull a re-do on the web if we really wanted.

The problem is getting people to switch away from an existing system with oh, just 3.2 billion+ users is no small feat. And those aforementioned prototypes tend to come with a blockchain component — which sounds all well and good. BUT — a good chunk of that 3.2 billion truly has no idea what a blockchain is — much less how it works.

So… some challenges stand in the way. Still, there are some advantages to a hypothetical clean slate.

Here are a few reasons that maybe, starting over isn’t such a bad idea.

Technically, no one owns the internet. But, a select few companies make up the “backbone” of the internet. The backbone is the primary data route that provides networking access to a handful of companies like AT&T, Comcast, Google, and others. The way that it’s set up is, we need to sign up with a provider to access the internet.

If that doesn’t make sense, refer to this “backbone graphic” courtesy of High Tech Forum: 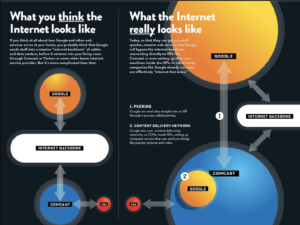 These ISPs don’t necessarily run the internet, but they do control how you can access it. The end of net neutrality means that all web traffic is no longer treated equally. The old rules prevented ISPs from offering paid access to digital fast lanes or blocking traffic.

Since the ruling, people have begun looking at “new internets” more seriously.

In some cases, communities are banding together to break free of ISP control. Take for example the Equitable Internet Initiative, a community-owned wireless internet that bypasses ISP control.

If you’d like to learn more about the project, you can check out this short video:

The idea of a user-first internet is an exciting one. Even Mr. Internet himself, Tim Berners-Lee, is behind it and working to create an open sourced project, Solid, which seeks to restore the power and agency of web users.

We’re at a strange crossroads where the biggest tech companies — and now, even smaller ones — are collecting data about us and using that to drive profits under the guise of better engagement.

The challenge with adoption lies in the fact that while we can get angry reading about black box data storage systems, we generally don’t notice that there’s any violation taking place. Some of the high profile breaches have captured the public’s attention, but there’s still this issue of convenience and resistance to change.

Do we want to change from Google Docs to Graphite Docs, from Twitter to Mastodon? Or get used to an encrypted email system?

And there are some obvious benefits. But the average internet user often feels that they don’t have much to hide — so what if Facebook knows where I shop or the same ads keep stalking me around the web? No biggie.

Back to the idea of Solid. Berners-Lee says that the platform is designed to work on our existing internet, but that users will create their own pods — essentially a personal data store — allowing them to decide where their data lives and who has access.

Developers will need to integrate Solid into their apps and websites. As of now, there are only a handful of developers doing so. Still, this vision paints a picture of users adding a layer of active consent into their internet activity.

There’s an awful lot of promise associated with the idea of the decentralized internet. Those proponents of the idea — from startup founders to activists — talk about decentralization as this beacon of hope. It’s a digital utopia that aims to solve all of our social justice woes and keep our online activity super secure.

One of the key benefits of a decentralized internet is the idea that artists, coders, and writers can share their creations with the world, without the risk of someone stealing their work. Blockchain-based internet could help keep digital assets secure — released if and when someone pays up.

On the flip side, there’s something about the method of creating a permanent online identity that’s a bit unsettling.

Like the idea that a blockchain record could hypothetically stick around permanently is great if you’re looking at it through the lens of severe internet bullying or criminal activity.

But when you consider it in the context of — say, an embarrassing comment or bad review, it could hurt you down the line. When stuff like that happens in the real world, it’s generally limited to a smaller circle and forgotten.

To succeed, the new internet must learn from old mistakes

The internet once represented this positive force of global connectivity.

Today, it’s become the scapegoat for our most pressing social problems. We’re talking about inequality, hate speech, violence, and of course, social isolation.

While net neutrality alone makes a strong case for starting over, we still need to face the mess we made on our current internet, lest we make the same mistakes.

Maybe it comes down to new regulations that limit the reach of tech giants like Facebook. Perhaps it’s creating better decentralized tools that connect with all users, not just the super techy among us.

In the end, the internet is a digital reflection of the world — something we can make better, sure — but there’s no quick fix.