Blindly searching for word games in the App Store or Google Play will turn up a bunch of junk results. You’ll see a bunch of scammy apps or those geared toward an audience that sees a low-stakes word search as some challenge.

And weirdly enough, if you Google the generic phrase, “best word games” hangman comes up as an actual option…

In any case, we’ve compiled a list of favorites challenging enough for word nerds, but entry-level enough for those newer to the game.

We know, the Words with Friends heyday has come and gone. However, several years after the Scrabble-inspired fad flamed out, Zynga put out a “sequel.”

Rather than update the original game, the company opted to start from scratch, so those players who wanted to keep playing the old version could do so without interruption.

And we have to say, there have been some significant improvements. Words with Friends 2 boasts several different modes. You can play on a team or challenge a bot, and now, access 50,000 new words.

The original one-on-one mode still exists, allowing you to challenge a friend, or honestly, some stranger that has a cat as their profile pic. However, now you can play Lightning Rounds, so you don’t have to commit to something you don’t have time for. 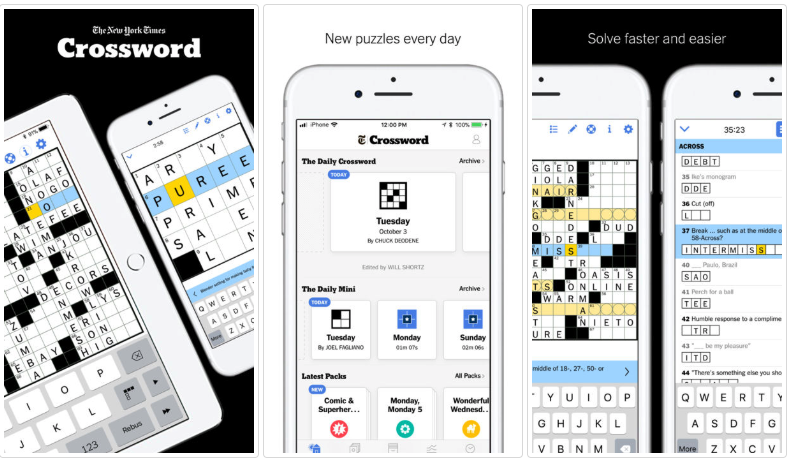 The New York Times Crossword Puzzle boasts an impressive 4.9-star score with more than 47.8k reviewers who love the game as much as we do.

The app is free, and you’ll get a few puzzle collections, plus the daily mini puzzle to get you started. That said, it’s worth subscribing if you’re an avid puzzler. For $6.99 a month, you’ll gain access to 20 years worth of iconic puzzles to your smartphone. You’ll even get a new puzzle coming out each day.

What’s great about the app is that you can start by working your way through Monday puzzles and leveling up until you can get through a Sunday without cheating.

What’s more, you don’t have to wait until the answers are released the next day. The app will track your time and let you know when you’ve successfully completed each square.

Letterpress is another Scrabble-style word game, but it’s perfect for people who can’t deal with the chaotic interface of the Words with Friends world — especially with ads enabled.

Wordscapes is an addictive word game featuring more than 6,000 puzzles that follow this sort of crossword puzzle/jumble mashup. What’s great about this game is that the levels get progressively more challenging, as you go. However, it’s still mindless enough that you can listen to a podcast and try to solve yourself to sleep.

Spellspire reminds us of learning games from the past like Math Blaster, where you’ll need to solve problems to combat the enemy quickly. With Spellspire, your ability to form words fast is the key to your power — the longer the word, the bigger the blast.

Part RPG, part word game, Spellspire is a run romp through a cartoon fantasy world. As you spell your way to the top, you’ll collect gold you can exchange for magical items and new gear.

This is the game for you if you’re looking for something word-centric, but want something a bit different than the average Scrabble-inspired game. Blackbar ventures outside of the grid and into a story about censorship.

It’s something of a puzzle. Words are blacked out, and you’ll need to use your common sense and linguistic know-how to solve it.

What’s more, Blackbar is more than a game. You’re reading a story that takes place between two young women corresponding to one another. However, parts of their letters have been blacked out by The Department, a fictional authoritarian regime that censors its people.

We like Typeshift. It has got an attractive minimalist interface, and it’s all about rearranging words. How it works is, you’ll get about three to five columns stacked one on top of the other. Your goal is to move those columns around spelling words in the middle column until every letter turns green.

The game is free to download, but eventually, you’ll need to pay to unlock more puzzle packs.

Armed with these games, we expect you’ll flex your vocabulary and maybe challenge your buddies to a grown-up spelling bee. Have fun!