HotSpot Shield VPN for iOS received a major update today, optimizing the app for iPad and adding useful new features. The popular VPN (virtual private network) application allows you to browse the internet securely, save data and access web sites and apps that are blocked outside of certain countries, such as Netflix, Hulu or Pandora.

Once enabled, HotSpot Shield VPN lets you protect your identity when using the internet on your iOS device by encrypting all traffic, allowing you to communicate privately. HotSpot Shield compresses all the data sent through the connection so your connection devours less data – the developer claims savings can be up to 50%.

The new version of HotSpot Shield boasts a tablet-friendly user interface for iPad users, which makes it very easy to set up and start using the VPN client. 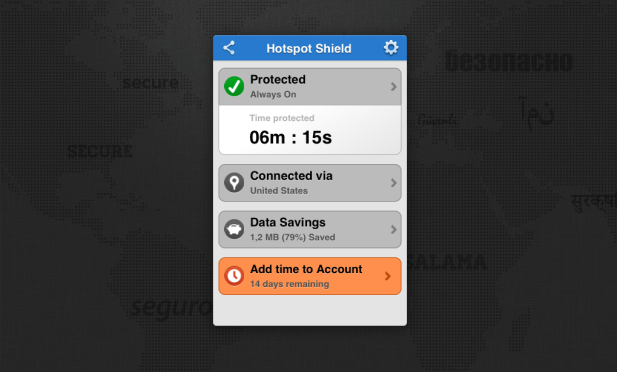 HotSpot Shield VPN 2.0 now allows you to choose the country of the IP location, between USA, UK and Japan. This means that no matter where you are you can browse content normally restricted to users in that country.

Other changes in the new version of HotSpot Shield for iOS include iCloud support, improved malware protection and the ability to check your data savings and protection status more easily.

If you’re a student it’s well worth considering installing HotSpot Shield on your iOS device. The developer, AnchorFree, is offering a free annual subscription of the service to students in the US and UK. In conjunction with this, it’s offering scholarship awards for colleges and universities as part of a scheme called the ‘College Privacy Challenge’.