The Nintendo Switch is a marvelous little console. Whether you’re battling away in school or at the office, cooperating with friends and colleagues, or playing at home on your big screen TV doesn’t matter. The games are the same and always lots of fun. This is what makes the Switch so special. It is everything a hardcore gamer could want while also being able to reach out and grab people who wouldn’t normally spend much time playing video games.

What is a games console though, without games to play on it? If you’re lucky enough to have a new Switch, you need to check out our list of essential Nintendo Switch games. Even if you’ve had a Switch for a long time or have the handheld mode Switch Lite, you should check out the games below. These are the best Switch games you need to play.

Wow! You need to see this AR game

The Legend of Zelda: Breath of the Wild 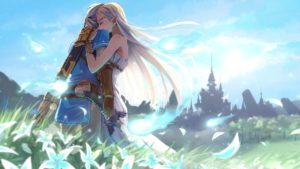 We’re starting with a big one here. There is a fairly convincing argument that Breath of the Wild isn’t just the best game on the Nintendo Switch, the best role-playing game, or the best Zelda game but that it is actually just the best game ever. The open-world RPG really is a joy to behold and offers a truly epic adventure that is just as much fun for somebody who’s never played a Zelda game before as it is for somebody who’s grown up wanting pointy Link-like ears. You should also check out The Legend of Zelda: Link’s Awakening and RPG fans could also try Skyrim or Octopath.

Rocket League sees you playing a game resembling soccer in cars that have powerful rockets that fling them all around the playing arena. The premise is simple, yet it is lots of fun to play. It is very impressive that all the physical mechanics that go into making Rocket League as fun as it is are possible on a device as small as the Switch. Team up with a buddy or go to head to head, it doesn’t matter. Rocket League offers addictive action that will draw you in and always leave you wanting to play just one match. This the type of game you pick up and then don’t put down. 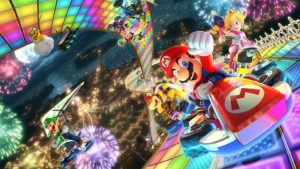 Mario Kart has been serving up manic multiplayer racing fun since the days of the Super Nintendo. Back then the SNES’s capabilities were pushed to the max to create the original game that would become a legend. The latest version on the Switch, which is like a bigger and better remastered version of the Wii U Mario Kart game is a worthy successor and offers players a lot to sink their teeth into. Lots of new game modes, characters, tracks, and power ups make this the most complete Mario Kart game yet. Also, the ease with which players can join the Switch consoles and the new online multiplayer options make the latest Mario Kart offering one of the best party games ever. Another fun party game to think about is Super Mario Party.

Super Mario Odyssey is a fine addition to what could possibly be the most famous video game franchise of all time. As well as better graphics and a rich game world, Odyssey also brought with it fantastic level design and some key new features to Mario’s platforming action; like viewable maps and the ability to quickly travel between different lands. Above all else though, this game feels like a Mario platformer game even when you’re controlling other characters and using their powers via the innovative Cappy addition to the action. Another Mario game worth your attention is Mario + Rabbids Kingdom Battle. 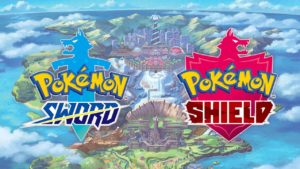 Pokémon games have become almost as synonymous with Nintendo as Mario and they’re definitely as popular, if not even more so. When released the latest addition to the series might have been criticized online but it quickly became the fastest selling Switch game ever. The game plays well and offers a really compelling experience for all Pokémon fans. Pokémon fans should also check out Pokémon Let’s Go Eevee.

Luigi’s Mansion 3 is an absolute treat of a game that only came to the Switch towards the end of 2019. With 15 floors of haunted hotel to get through, Luigi’s Mansion 3 plays a lot like the other games in the 19-year-old series yet offers more than enough fresh aspects to make the gameplay stand out on its own. This is still a hunt-and-chase puzzle game but elements like the Luigi clone made of goo brilliantly named Gooigi give a fantastic new multiplayer co-op edge to the series. This game looks like it was as fun to make as it is to play.

Smash Bros. is another classic Nintendo franchise that got the Switch treatment in style. The Switch version of of the definitive Nintendo fighting game received the Ultimate moniker because it has more characters than any other Smash Bros. game that has come before it. The roster includes the likes of Metroid’s Samus, Pokémon’s Pikachu, and Street Fighter’s Ryu. On top of that, Super Smash Bros. Ultimate also has the best single player campaign of the whole series. To put it simply, you need this game. Another great fighting game worth your attention is Splatoon 2.

Considering the amount of AAA games that can feel a little compromised on the Switch’s small screen it is a delight to tell you about a game that offers the best in class experience across all consoles including the PS4 and Xbox One. Mario Tennis Aces is the best tennis game you can play on any console even though you play as famous Mario characters rather than famous tennis players. That in itself is worth a look but the gameplay is what will really grab your attention, if you’re a tennis fan.

The final game in our list of must-have Nintendo Switch games is possibly the most Nintendo game ever. When Tetris first landed on the Nintendo Gameboy its simple, yet addictive premise took the world by storm. There have been updates and remakes brought out time and again, but none have quite reached the heights of Tetris 99 for the Switch. Tetris 99 is a last man standing battle royale version of the retro classic. Yes, you read that right. You play Tetris in a battle to the death with 99 other players. That alone is why you must have it, that it is so much fun is why you won’t be able to stop playing it.