Here at the Nokia World 08 event in Barcelona, the Finnish phone giant has announced a new tactic in the fight to stop the iPhone taking over the World . Its new N97 device will not only include a touchscreen but also a fold-out keyboard and angled display, as Nokia clearly goes against the fashion of touch-only devices like the iPhone and Blackberry Storm. 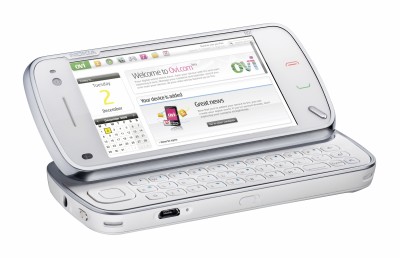 It’s not just its shiny shell and that tickled out imagination though, and some of the apps and features inside the N97 look genuinely useful. Here’s a quick run-down of the features that caught our eye here at the typically glitzy presentation, given by Anssi Vanjoki, Executive Vice President, Markets, Nokia:

Point-and-find: Perhaps the feature that got most mouths dropping was the new point-and-find feature. This allows users to point their phone at a building, monument or other site (the example given here was the Sagrada Familia in Barcelona) and the phone will automatically detect what it is. It will then display information, facts and even give virtual tours about that specific place. The so-called ‘point-and-find’ feature looks pretty incredible and got us wondering whether this kind of technology will work in the future on humans (i.e. you just point your phone at someone at it tells you who they are, gives you their latest Facebook updates, Twitter feeds, etc.) At the moment, the technology relies on GPS location to help determine what the thing is you’re pointing at, but there is some image recognition involved.

Nokia Maps 3.0: The new Nokia Maps tool also got the folks in the press section frantically blogging on their laptops. Besides adding some cool new features such as speed limit details, 3D terrain and buildings, and more travel guides, it fits in with Nokia’s plan to “reinvent the Internet”. It will allow users to see where their friends and family are at any time and interact with them via their social networks. Nokia’s vision is to create a platform that merges real world activity with virtual spaces. 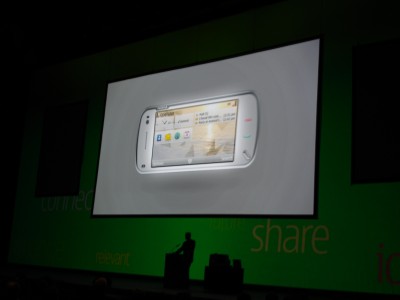 Camera: The N97 will include a 5 megapixel camera with Karl Zeiss lens, which is capable of capturing super DVD-quality video at 30 frames per second. There’s a total of 48Gb of storage space on the N97 (32Gb internal and 16Gb microSD)

App store: There was also mention of an App Store for Symbian software. Vanjoki was keen to emphasise the openness of the Symbian platform and pointed out that it was “the only truly open and mature mobile operating system”. He noted that there are four million developers working on the OS and tens of thousands of apps available – a clear statement that despite he hubub surrounding the iPhone and Android app stores, Symbian is still a giant among these young upstarts.

Personalizable home screen: The new touch-screen homescreen of the N97 was pretty nice too. Users can customize the homescreen just by dragging widgets onto and off of the screen and rearranging them with their finger. There’s a neat little feature where you can display images of four of your most important contacts on the home screeen, not only for quickly calling, but also for handy access to all of their social feeds and faster emailing. On the subject of email, the N97 will integrate all the major mail and IM networks into one app, including GMail, Yahoo!, AIM, MSN, etc. Other new tools available from this home screen include RSS, a clock, status bar and file manager.

Web: The N97 also includes a new full-screen Web browser. It looks like it integrates well with both the touchscreen and supports more video formats than ever. Watching YouTube clips in full screen on the device looks like a truly joyous experience.

The devices are set to ship in the first quarter of 2009, and will retail for 550 Euros. This is a pretty reasonable price point for a phone of this calibre and it’s certainly another reason to think twice before buying an iPhone – especially as the N97 gives you the comfort of a touchscreen with the practicality of a keyboard.

Stay tuned, I’ll be back with more from the Nokia World show later today…