Online courses and classes to learn everything 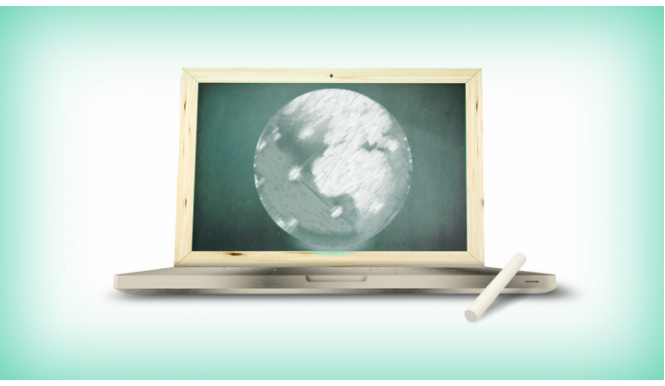 Learning has never been easier, thanks to a multitude of online courses that can teach you about anything from classical music, to astronomy, to cultural studies.

From the world’s leading universities to ordinary people with a passion for sharing knowledge, courses and classes have been put together for people to either expand their general knowledge, or to learn about very specialized topics. All of this, without even leaving your computer, and often for free. Here, we share with you a list of the most interesting websites that offer online courses and classes. 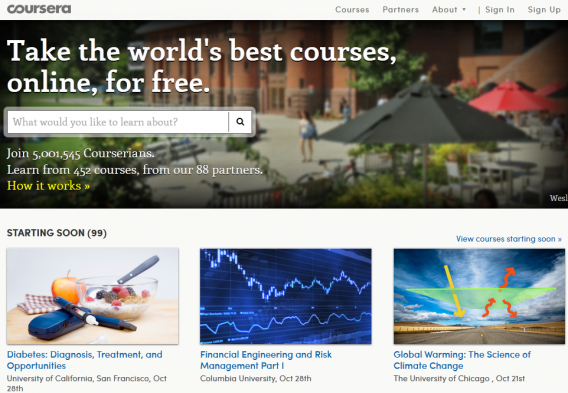 Coursera is a website that’s been created by some of the most well-known and highly regarded universities, including Yale, Stanford, Princeton and the California Institute of Technology.

The vast majority of courses are available in English, but a handful of courses can also be followed in Chinese, French or Spanish. What can you learn about? Virtually, everything. Universities from around the world cover topics from the history of the world, to art and medicine, physics, chemistry and business.

Coursera courses have a very similar style to academic courses. You can listen and watch lectures, sit tests and work on tasks. Many courses actually have tens of thousands of students from around the world working on them, but with online courses, you don’t need to worry about fitting everyone into a university classroom. The biggest question: how do you check homework from 10,000 people?

Written homework is assessed by the students themselves. Typically, the work passes through the hands of five other students. Many courses offer certificates of completion. They’re not the exact equivalent to sitting the same classes at the university itself, but they’re not easy to obtain. In most cases, credits and a certificate of completion for an online course will only be awarded if you get a mark of 80% or more. What’s important to note is that each course begins and ends at a specified time. Once it’s finished, however, you’ll still have access to the archive of course content. 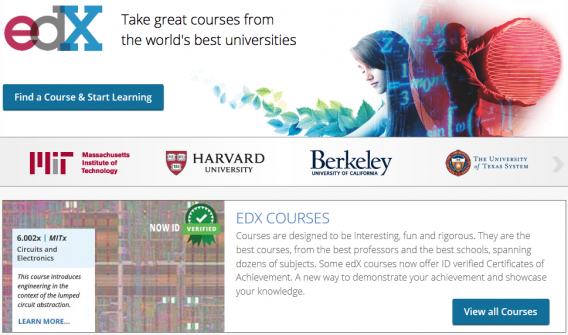 edX is very similar to the Coursera platform, but there’s a different group of universities behind it. The most well-known universities that offer courses on edX are MIT, Harvard, Rice University, and Berkeley. The courses on edX are in a very similar format to those offered on Coursera – they need to be completed within a specified time frame, you can get credits, and there is a very wide range of courses offered. For now, the courses are only available in English. 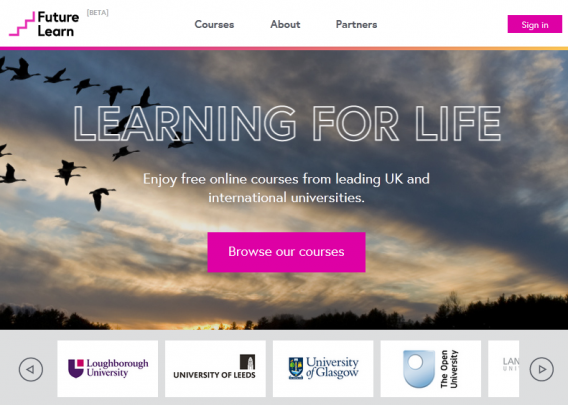 FutureLearn is a platform that’s been developed by British universities. For now, the choice of courses is not quite as varied as the two previous platforms, but this will surely change over time. At the moment, you can learn more about the Higgs Boson, explore the secrets of power brands, and learn how to create a mobile game using Java.

The courses available on Udacity resemble those on the platforms listed above, although there are no famous universities behind the platform. The service was created when two professors from Stanford University started a course called “Introduction to Artificial Intelligence“, attracting 160,000 students from 190 countries around the world.

The current choice of courses is smaller than you’ll find on Coursera, but larger than the selection on FutureLearn. You don’t, however, need to wait for a specific course to open; they’re available for students to sign up for at any time, and can also be stopped at any time. What can you learn through Udacity? You can learn how to create webpages from the co-founder of Reddit site, or how to successfully start a tech company. 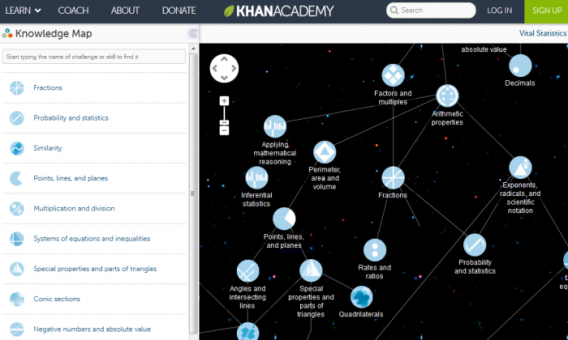 The Khan Academy focuses on teaching the basics of science and the humanities, and will be useful to children and teenagers in school. Thanks to a vast community of users, video lessons are translated into many languages, which means you don’t need to know English to be able to use the platform.

The Khan Academy wants to revolutionize the teaching of basic knowledge, such as creating a knowledge map (shown in the screenshot above). What this aims to do is to show that you don’t need to learn the topics one by one, but rather, learn them as needed, discovering relationships between them as you go. 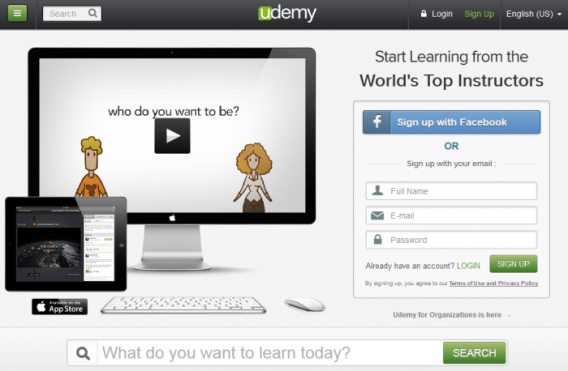 In the 21st century, knowledge and the ability to teach are not restricted to institutions such as schools or universities; Udemy enables anyone to create a course and share their knowledge. In this way, the service offers hundreds of courses on a variety of topics, although they are obviously less academic and less scientific in their approach.

Udemy puts an emphasis on practical skills, such as a courses explaining how to use Excel, how to negotiate a raise at work, or how to practice yoga. The way in which Udemy differs from the platforms we’ve already mentioned is the fact that the vast majority of courses cost a fee.

The Skillshare platform began as a page where you could set up a class and then teach people in person, either in your own home or elsewhere. It was some while later that they added the ability to create courses that were available online. Because of its origin, Skillshare focuses on learning very practical skills and objects that can be taught in a planned way.

Each course must lead the students to realize an idea for a project that they develop through the course – learning can’t simply be through dry lectures. With this approach, learning how to design a logo, for instance, means you can do it yourself and have the opportunity to get feedback both from the other students and the teacher.

Lynda is another service that focuses on learning specific skills. It works in a similar way to Udemy, but uses a different business model. Instead of buying individual courses, you pay a fixed amount every month, which gives you access to all courses that are currently added, as well as new courses. At the moment, Lynda offers over 2,000 online courses. In addition to the courses, there are also mobile apps for Android and iOS. 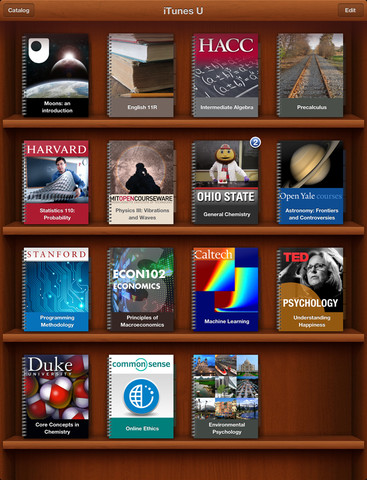 The iTunes U app for iPhone and iPad is offered by Apple. It includes free courses from leading educational and cultural institutions, such as universities – Stanford, Yale, MIT, Oxford, and UC Berkeley – as well as the MoMA (The Museum of Modern Art in New York) and the New York Public Library. Content comes from 30 countries, with a total of more than 600,000 lectures, books and video clips in various fields of knowledge, from algebra to zoology.

iTunes U makes uses of all the features available to it as an iPhone and iPad app. The application synchronizes with various passages that have been read and underlined in textbooks available on the iBooks app, and notes can be added to all course materials, which is also synched on different devices. Interesting information can be shared through Twitter, email, or SMS. iTunes U also lets you easily print out text directly from the application.

Education in the 21st century

All of the platforms mentioned above demonstrate the way in which education in the twenty-first century is going. On the one hand, every one can be a teacher and create an online course through platforms like Udemy, Skillshare, and Lynda. On the other hand, prestigious institutions, such as universities with centuries-old traditions, have also taken advantage of the internet to share highly specialized knowledge.

Nothing can replace face-to-face contact with a professor during a lecture or class, but the opportunity to learn wherever we are, via a computer or a phone with internet access, provides us with possibilities that we could only previously dream about.