Red Dead Online is a world where respect, money, and loot comes at the end of the barrel of the gun. To survive and reap the rewards of the cutthroat world of the Wild West, you’ll have to be well armed. You’ll also want to spend your money wisely. We’ve put together an in-depth guide to every weapon available in Red Dead Online, so you can know exactly what you’re getting into before you fork over your hard-earned cash. For this guide, we’ll be looking at the powerhouses of a gunslinger’s arsenal: shotguns. 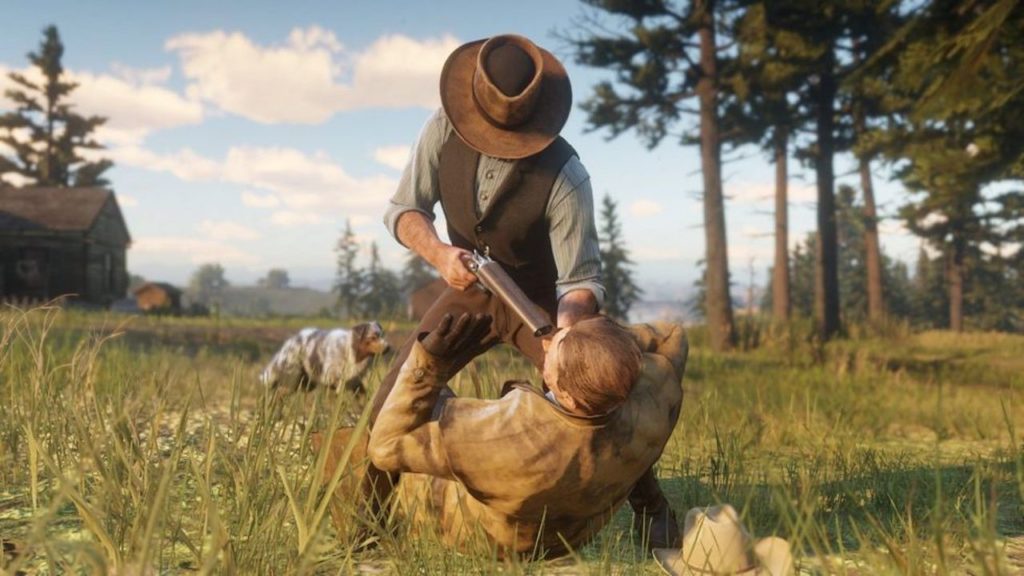 Note: We’ve based our number rankings for damage and fire rate in this guide out of a possible score of 10.

Description: There’s no better way to let someone know you mean business than at the end of a Sawed-Off Shotgun. This hand cannon packs all the punch of a full-sized Double Barrel in a convenient, pocket-sized package. Its main advantage is that it’s the only shotgun you can carry in a sidearm slot, which means a significant upgrade to your overall firepower. It also has the same drawbacks as the Double Barrel as well, namely the 2-shot ammo capacity. That can be easily remedied though: dual-wielding two of these bad boys means you have four shotgun shells you can fire off in quick succession, absolutely decimating anything unfortunate enough to be standing in front of you.

Description: To paraphrase a certain zombie-slayer from a far off land, this is your boomstick. The Double-Barrel shotgun offers two rounds of misery-inducing buckshot that can be fired off as quickly as you can pull the trigger. The only drawback is that every time you fire off those two shots, you’ll need to undergo a somewhat lengthy reload process that can leave you exposed to return fire. That said, the Double Barrel boasts the highest damage of any shotgun, meaning anyone on the wrong end of those two shots is unlikely to be standing once you’re done.

Description: The Pump-Action is a solid all-all around weapon. Despite being unlocked at a low rank, this workhorse is a dependable choice even into the higher levels. It has a good balance between damage, reload speed, and fire rate. It doesn’t excel in any particular area, but there also aren’t any huge drawbacks to this gun either. And of course, what’s more fear-inducing than the sound of loading a pump-action shotgun?

Description: No need to work a pump or cock a lever between shots on this powerhouse. Simply keep pulling the trigger and you’ll blanket your targets with lead. Compared to the other shotguns, the Semi-Auto’s damage is on the low end of the spectrum, but its blistering fire rate more than makes up for it. If you’re walking into a close-range firefight, this is the gun to take with you. You’ll have to be patient, though. Its high price tag means you’ll have to do some penny pinching to save up enough to buy one, and it’s also the last shotgun to be unlocked.

Description: Movie buffs will recognize this iconic shotgun from “Terminator 2.” Of course, the version Arnold uses in the movie is sawed-off and you can’t perform his iconic flip-cock in the game. Despite that, this is still a stylish and deadly weapon. The lever action makes for a fast fire rate, and it also boasts a high damage per shot, on par with that of the Pump-Action. The high capacity and quick reload speed make this a solid contender for the game’s best overall shotgun.

When you’re backed into a corner by a rival gang or surrounded by the law, a shotgun can be your ticket out of a sticky situation. Though they all have different strengths, what’s certain is that when it comes to raw power, the shotgun can’t be beat.