Red Dead 2: How to find three rare pistols early in the game 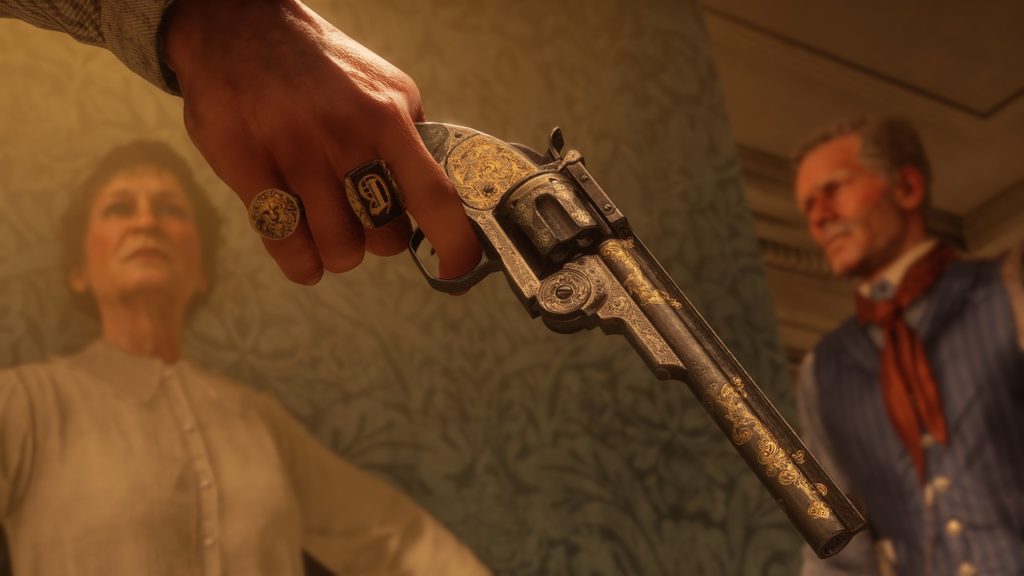 One of the best parts of being a Wild West gunslinger is getting to decide what weapons you carry. Red Dead Redemption 2 features over 59 different weapons, most with the ability to be customized in incredibly detailed and intricate ways so you can make your armaments your own. Some of the rarest weapons are hard to find, or remain locked until later in the game. Fortunately, players have an opportunity to snag three of the game’s rarest sidearms at the start of the game. Here’s our guide to completing the quest and grabbing these unique guns.

Red Dead 2: How to find three rare pistols early in the game

Soon after arriving in the town of Valentine in Chapter 2, players will come across two men conversing at one of the local saloons. Talking with them will activate the sidequest The Noblest of Men, and a Woman. One of the men is a writer, Theodore Levin, who has been tasked with telling the tale of latter-day gunslinger Jim “Boy” Calloway. Levin tasks you with tracking down some of Calloway’s old partners in crime, providing you with their photographs and locations. Most of them will be located in far-flung areas of the map that you haven’t visited yet, so be sure you’re ready for a lengthy ride. All of them, with the exception of Black Belle, will drop a unique sidearm after being killed. Doing this quest early will leave you well-equipped for later in the game.

How to master hunting in Red Dead Redemption 2

Emmet Granger can be found south of the gang’s camp at Horseshoe Overlook on a small pig farm. On arriving, it becomes immediately apparent that Granger doesn’t like strangers much, and tasks Arthur with cleaning out his pig pen if he hopes to get an interview. As Arthur sets to the less-than-glamorous task, Granger regales him with tales of his vicious and sadistic acts. Eventually, Arthur gets fed up, planting dynamite on the manure pile and blowing it sky-high. Granger is furious, and you’ll be forced into a Quickdraw Duel. After taking Granger down, Granger’s Revolver can be retrieved from his corpse. It’s a unique variant of the standard Cattleman Revolver, with a dark metal frame, white bone grips, and a gorgeous dark red floral engraving.

You’ll have to ride back into the snow-covered mountains for this one. Flaco Hernandez, a member of the Del Lobo Gang, is holed up in the peaks with some other gang members. After a long ride into the wilderness, you’ll come upon the gang’s hideout: a cabin on the shores of a frozen lake. From here, you have two options: you can either shoot it out with the Del Lobo gang, or attempt to talk your way into the camp without opening fire. Either way, you’ll eventually make it to the cabin. Flaco will emerge and another Quickdraw Duel ensues. Be quick, as Flaco will dive to one side as he shoots. Flaco’s Revolver will be on his already cooling corpse. Like Granger’s Revolver, this is a variant on the Cattleman Revolver with a gleaming silver finish, white grips, and a black sugar skull design inlaid on the frame.

Red Dead 2: 5 things you didn’t know about your horse

Your final target can be located down south in the town of Rhodes. After arriving in town, you’ll head to the local train station and speak to the station master, who informs you that gunslinger Billy Midnight has taken to heavy drinking. He’ll camp out on the bar cars of trains that pass through town, often riding them in circles and drinking away his troubles. After hopping onboard the next train out of town, you’ll discover Midnight in his usual spot at the bar. Convinced that you’ve been sent to kill him, he’ll bolt. You’ll have to chase him through crowded train cars and onto the roof of the speeding train, where you’ll once again be forced into a duel. Once Billy falls, you can grab his pistol. Midnight’s Pistol is a gold-plated variant of the semi-automatic Mauser, with an intricate black scrollwork engraving. The standard Mauser will remain locked until late in the game, so retrieving this gun early on means you won’t have to wait to get your hands on this high-powered gun.

At this point, you’ll have to wait until late in Chapter 4 to complete the quest, and you’ll be rewarded with an additional gun: a custom version of the Schofeld Revolver. Following this guide and completing the quest’s early stages, however, will net you these hefty additions to your arsenal as early as Chapter 2.

4 Photoshop Tips On Editing Your Background