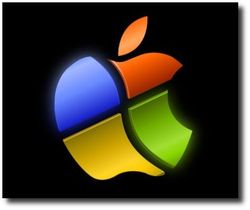 Many people drool over Mac computers but not all of them can afford one – and that includes me. Beautiful as they are, Macs are still too expensive for a tight budget like mine, so while I’m saving to buy one some day in the future, I’ve decided to give my Windows a more Appleish look.

Have you ever noticed the amount of Windows apps that have been developed to emulate Mac’s apps and functions? You can start by having your own Windows dock with ObjectDock or RocketDock, two toolbars that replace the Windows standard toolbar with a more Mac-themed one. Or you install Switcher, the Windows version of the cool Exposé effect, which enables you to change between running programs in a really stylish way. But if you’re taking the hardcore way then you should probably grab hold of FlyakiteOSX, a full featured visual theme that will completely transform your Windows into something more similar to a Mac.

There are also some Windows tools that have been developed with some well-known Mac programs in mind. One of them is MightyBox, a Windows clone of the popular Mac application launcher QuickSilver. Another one is Snap, a webcam tool that resembles the famous Mac app Photobooth. Likewise, some Mac developers have also created specific versions of their applications for the Windows system, like Safari and Comic Life.

Funnily enough, I don’t think there are that many Mac programs that emulate Windows functions. I wonder why!