The evolution of online music 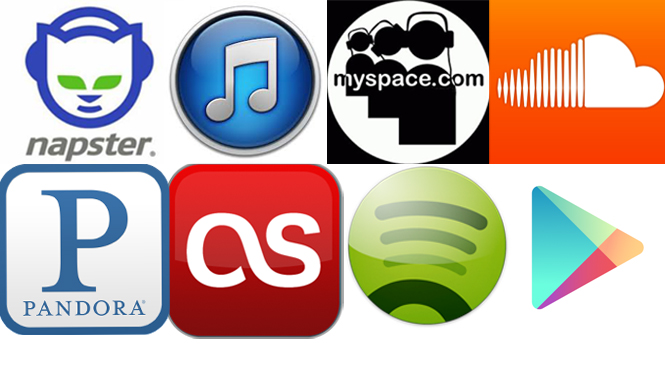 From P2P to iTunes, MySpace to Pandora Radio, Soundcloud to Spotify, and most recently, Google Play Music All Access, the evolution of online music and how people discover, listen to and share it has changed drastically in the past decade.

With a shift from people illegally downloading music to their MP3 players, to purchasing from iTunes to sync with their iPods, and now streaming online straight from mobile phones, we take a look back at how our online music habits have changed over the past 15 years.

P2P is what many people remember as the first iteration of online music. Uploading and downloading music from users became synonymous with Napster (1999), the pioneering P2P downloading software famously created by American college student Sean Parker, making him filthy rich but also getting him into all sorts of legal battles with copyright infringement and piracy laws.

The quality of music was hit-and-miss and the speed of downloading varied with internet connections and the number of users (remember, the height of Napster coincided with the joys of dial-up), but people still went crazy for free, although illegal, music. Similar P2P software like Ares, Bearshare, Kazaa and Limewire started popping up everywhere, especially after Napster’s demise. People could make their own CDs, and later, download files to their MP3 players. Similarly, torrents also emerged as a way for people to download media files from each other. 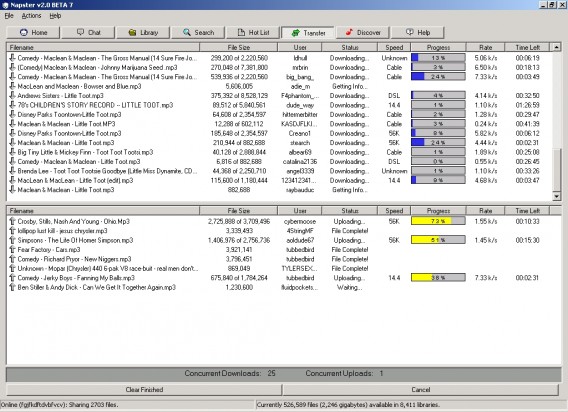 The main issue that emerged with this type of P2P software was, as we all came to know, copyright and piracy laws. The music industry suffered greatly as a result of royalty-free P2P downloading and music sharing. Legal or not, however, online downloading became the primary source of obtaining music. Physical album sales were quickly dying out. Consequently, music companies had no choice but to find a way to benefit from this new source of music consumption. Enter iTunes.

iTunes emerged as a media library organizer in 2001, just as Napster was shut down after one too many legal battles. The iTunes Music Store launched two years later in 2003. As a product of Apple, the Music Store (which later became the iTunes Store) was the leading software for selling music online, becoming record executives’ answer to the problem of monetizing and legalizing music downloads. iTunes created licensing agreements with the major record labels to pay royalties for purchases of songs and albums. Whereas other similar online music stores charged monthly fees for accessing their catalog, iTunes did not. Notably, what had emerged as a result of Napster was a general trend towards singles instead of entire albums, and iTunes complied with this consumer desire, letting people pay for individual tracks without having to purchase entire albums. Aside from the big labels, thousands of smaller labels signed on as well. 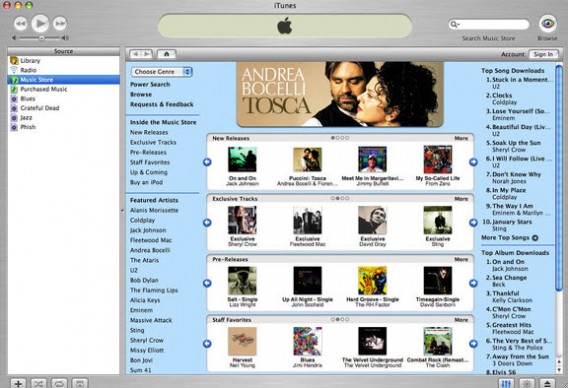 At this point, portable music was becoming entrenched, and with iTunes came the iPod, solidifying the headphones-on-the-street culture. But what also emerged at this time was social media. And before Facebook and YouTube, there was MySpace.

At its roots, music has always been a social activity. A social networking site with heavy emphasis on music, MySpace (2003) bridged the gap that iTunes failed to fill, which was discovering and sharing new music (Facebook in 2004 and YouTube in 2005 further solidified the strongly social culture of sharing media online). 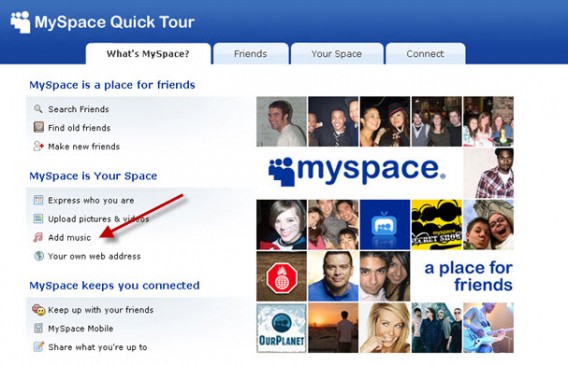 MySpace was not only good for connecting with friends and sharing music, but was a great opportunity for new or emerging artists to share their music online and get some exposure. It really highlighted the number of people producing their own music to a really high standard. MySpace and similar sites opened the door for discovering new and emerging artists and really helped open up the music scene to artists not signed to one of the Big 5. Even better, MySpace was a free service! Whereas the major record labels were more concerned with monetary compensation, emerging artists were much more interested in getting exposure, making payment a non-issue. Soundcloud (launched in 2007) emerged with a similar concept, a social network much more focused on emerging artists and used for discovering new and eclectic sounds. Now people weren’t downloading the music but listening to it online, opening up a new direction for online music: streaming.

As an alternative to downloading, streaming became more of a reality with faster internet connections, and more of a practicality with the sheer amount of music now becoming available online, making downloading and storing everything you wanted to hear almost impossible. It no longer became necessary to own music because it was accessible for free (or a relatively small subscription fee) online.

Streaming sites like Pandora Radio (2000) and Last.fm (2002), more popular now than ever before, are able to integrate both online streaming and recommendation functions to suggest music to listeners based on what they already listen to. Last.fm uses your existing music library, as well as integrating with other music streaming services to recommend music, while Pandora Radio makes recommendations based on your ratings of other tracks. 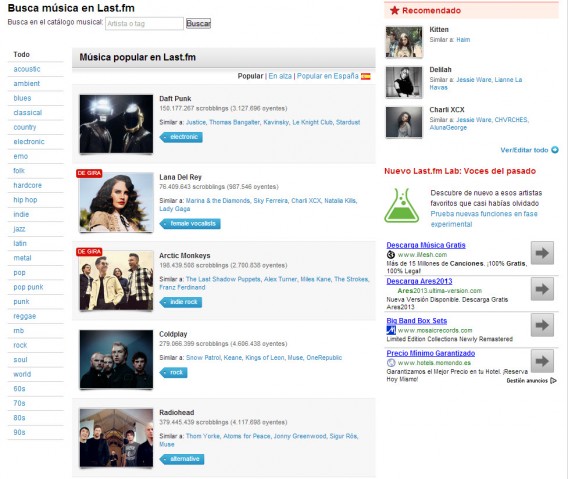 As most things have moved into the cloud, the shift for music has been from paying for a product to paying for a service. Spotify (2006), Rdio (2010) and most recently, Google Play Music All Access (2013) are the latest iterations and some of the most popular music streaming models on the market now. They all require monthly subscription fees for unlimited access to their ever-expanding music catalogs (also how they compete with each other), importing and integrating music from other linked services as well as your own music library, and give mobile access to allow for music wherever you go. 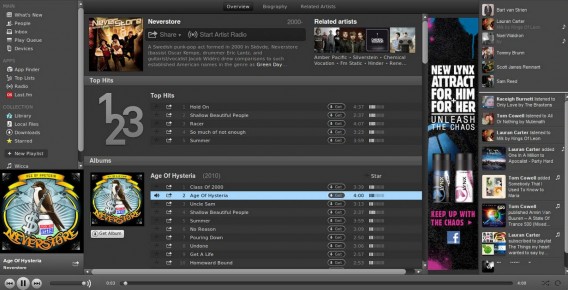 The most current versions of these pay-to-play services seem to include everything that has been successful in recent years: integration with other services including social media (ie. Facebook), the ability to share music and create playlists and unique social profiles, giving suggestions for discovering new and similar artists, and providing mobile access, all legally and for a relatively small fee. Owning music seems less important than before (it’s hard to say why, but it might be that owning something intangible which could theoretically be wiped at any moment doesn’t sit well with people) but the concept of paying for access seems less of an issue than before. At the end of the day, it seems like a small fee for unlimited access to the vast mountain of music available online is okay for most people.

There are of course remnants of some, if not all, of even the earliest above-mentioned software. With software and technology constantly evolving, however, it’s hard to say down which technological avenue our love of listening to, discovering and sharing music will take us next.