I was surprised to learn that the new version of Firefox is 15% faster than the previous version. When I say surprised I actually mean I didn’t believe a word of it. I decided to challenge this figure by putting Firefox 3.5 and Firefox 3.6 up against each other in a series of three benchmarking tests. I also included comparisons with the latest versions of Chrome, Opera and Internet Explorer. In the name of transparency, I’ve decided to explain the benchmarking process for each of the three tests I applied. Why not try it for yourself and see which of your web browsers runs the best?

Peacekeeper is a free service that puts your browser through its paces in a series of thorough tests. It checks performance in the following areas: rendering, social networking, complex graphics, data, Document Object Model operations, and text parsing. Each test takes about five minutes and simple involves hitting a button on the Peacekeeper site in the browser you want to test. To make a fair test you should ensure that you just have one tab or window open, and disable or uninstall any extensions you have running.

Peacemaker gives each browser an overall performance score, and you can view a more detailed breakdown of how that score was arrived at by clicking the ‘Details’ link on the graph. Here’s the graph generated by the browser tests I performed: 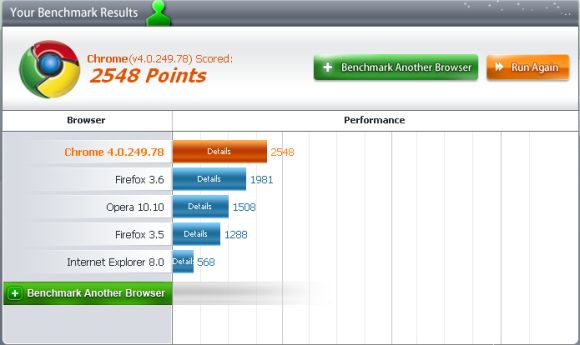 The second test I performed was the same one run by Computerworld in its tests on Firefox 3.5 and 3.6. The SunSpider JavaScript benchmark is a utility that tests the speed of a browser by running a series of JavaScripts and measuring the speed at which the software process them. It breaks the results down into a series of different categories based on the scripts it ran. These results are a little harder to interpret than the Peacekeeper test, but you can look at the total time and use this as your benchmark for comparing the browsers. Here are the overall times (fastest first) for the browsers I tested:

The third and final test is much quicker and simpler than the previous two. The Acid 3 Test is used to measure a browser’s compliance with web standards, particularly relating to the Document Object Model and JavaScript. To pass the test a browser needs to attain a score of 100/100 and the final image it displays must match the reference image. 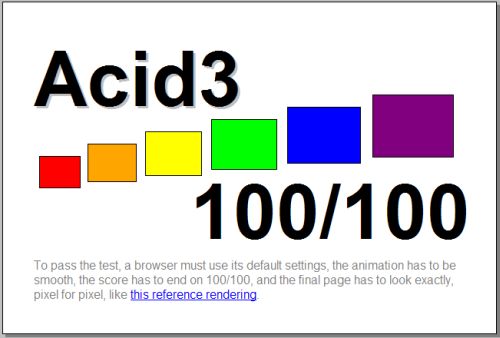 Of the five browsers we tested, only Google Chrome and Opera attained the maximum 100 out of 100. Firefox 3.6 (94) and Firefox 3.5 (93) both almost made the grade. Microsoft should hang its head in shame though, because IE8 only scored a measely 20 out of 100, meaning it falls way short of standards compliance.

Our benchmarking supports Computerworld’s claim that Firefox 3.6 is much faster than version 3.5. In fact, according to the SunSpider test we ran, the newer release comes out 17% quicker than the previous version. It’s still not as speedy as Chrome though, which was more than twice as fast as Firefox, and way ahead of Opera and IE.

What’s more, the Mozilla browser performs very well against its competitors in the Peacekeeper benchmark. Again, it’s only Chrome that pips the latest version of Firefox. And again, Internet Explorer is left floundering in final place, this time in a test than examines the overall capabilities of the browser.

So, my advice based on these results is to upgrade to Firefox 3.6 if you haven’t already done so. Better still, install Chrome and use that to browse the web instead. Having said this, ut’s definitely worth running the benchmark tests on your own browsers because the results can vary considerably depending on your setup, the amount of extensions that you have installed, the OS you’re using, etc.