The internet went nuts this week, as it likes to do sometimes. Remember that dress back in 2015, the one that was either black and blue or white and gold? Everybody had an opinion, and nobody could agree. Well in 2018 we got the sound clip that nobody could agree on what it was saying. Fortunately, however, we now have the definitive answer straight from the horse’s mouth. Before we get to that though, let’s go through the civil war that has been tearing up the internet all week one more time.

Do you hear Yanny or Laurel?

It all started when a literature student in the US posted a sound clip from vocabulary.com, which is the go-to page if you’re trying to learn a new language or boost your word arsenal. Katie Hertzel posted the audio clip for Laurel because she heard Yanny when she played it back. With the hook baited, the internet bit and three distinct camps began springing up all over the world. We had the Yannys, the Laurels, and those who changed their minds every five minutes. It was chaos.

After the initial forays, in an attempt to bring peace back to the internet, people started trying to apply logic to the nonsensical conundrum that splitting lifelong friendships and families in two. One Redditor, juuular, posted,

“It has to do with the bass frequencies not being perceived as loud at lower volumes.

If you turn the volume very low, there will be practically no bass and you will hear Yanny.

Turn the volume up and play it on some speakers that have actual bass response (aka not your phone) and you will hear Laurel.”

If you want to change the frequency of the sound clip yourself, download one of these great equalizers.

The problem, however, according to juuular was that this frequency differential deferred to individual human physiology. If you expected to hear Yanny, you would do and likewise if you expected to hear Laurel. As is so often the case on social media the psychological barricades went up long before we knew they were there. By the time most of us had heard the audio clip we’d already been influenced one way or another. From that point on, it was cyber trench warfare on a global scale.

Once mainstream media outlets like The Verge started reporting on the science of it all, things started to calm down. There is nothing like science or facts to suck the life out of a viral internet sensation. The war was over.

So what caused the Yanny or Laurel meme?

If you survived the great Yanny/Laurel viral war of 2018 and want to know what was behind it all, don’t worry, we’re here for you.

Mark Tinkler, who is a co-founder of vocabulary.com, has explained in Wired that opera singers are behind the whole thing. As Opera Singers need to sing in many different languages, they are the go-to guys when people need demonstrate correct phonetic pronunciation. As such, a handful of opera singers are responsible for the word pronunciation sound clips on vocabulary.com. 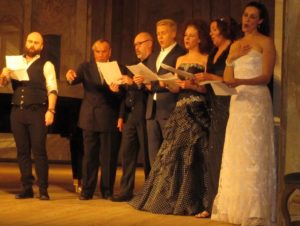 Tinkler doesn’t want to give specific names, but he explained that the sonic range of opera singer’s voices brings into play all of the frequencies that kicked off the viral debate in the first place. Both Yanny and Laurel have similar acoustic patterns. They can be understood in both ways, in a similar manner to how optical illusions can look one way to some but another to others.

So there you have it. Opera singers were behind this week of carnage we’ve all just survived. Who would have thought that a global civil war between people losing their heads because their friends hear Laurel, but they hear Yanny, would’ve been the result of opera. The world in 2018 really is a strange place.