Cookie Clicker is an enigma. It is a game so basic that it barely qualifies as a form of entertainment. It appeals to every human being’s basic sense of action equalling reward, hitting the player with a series of dopamine rushes that compounds into itself. 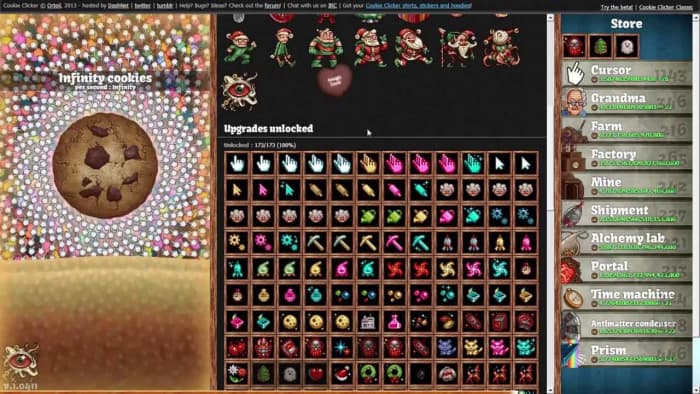 Cookie Clicker is a free browser game that offers the player a simple goal: get as many cookies as possible. As the player clicks the giant cookie to gain more of the baked goods, they spend their cookies on buildings and upgrades that grant more cookies. If that sounds stupid and inane, it is, yet Cookie Clicker has gained a massive dedicated following.

In this article, we’re going to look at how the game design of clicker games exploits human psychology and how the genre itself is a brilliant satire (and exploitation) of the late capitalist digital hellscape we live in.

Inside the psychology of clicker games

To understand why the appeal for clicker games exists in the first place, we need to go back to high school psychology and look at the Skinner box. Created by B.F. Skinner, the famous experiment had a rat placed in a box with a lever and a food dispenser. Whenever the rat pressed the lever, it would be rewarded with some sort of stimuli (which was usually food). The rat would quickly learn that by performing the repetitive and unstimulating action of pressing a lever, it would be rewarded. By pairing a formerly neutral stimulus (pressing a lever) with a rewarding stimulus (receiving food) the rats had been classically conditioned.

Though a gamer’s brain is slightly bigger than a rat’s, clicker games affect them in much the same way. Clicking a cookie is not an inherently stimulating action at all, yet it makes a number go up, and human beings LOVE big numbers. While the number of virtual cookies you have has no inherent actual value, players will nonetheless feel a rush of dopamine as if they have accomplished something tangible and real. The rat, at least, received a piece of food, prolonging its life and achieving a basic biological goal.

Are we being too harsh on the genre? If clicker games are such a mindless waste of time, what about other games? To that, we say that clicker games take the increasing amount of addictive game design decisions made over the years and build the game completely around them.

Do you need a digital detox?

It wouldn’t be fair to blame the existence of mindless clicker games on their developers; they were simply following gaming trends. As the gaming market has shifted from the single payment model to the DLC/microtransaction model, game developers are more focused on getting gamers hooked on their product than getting them to buy it in the first place.

Modern game design places more value on extrinsic awards than on intrinsic ones. To demonstrate what we mean, think of a raid in World of Warcraft. An example of an extrinsic reward would be gaining valuable loot after beating a difficult raid in WoW, while the intrinsic reward is a fond memory of camaraderie and satisfaction after working together with a group of friends for months to accomplish a goal. Designing a game based on extrinsic rewards is not inherently a bad thing, but clicker games take this basic design philosophy to the extreme.

The emergence of achievements and loot boxes have shown that gamers favor extrinsic rewards over some sort of internal satisfaction. Do you think shooters like Fortnite or Call of Duty would be as popular as they are without the constant stream of unlockable skins and items that come with playing? In today’s market, solid gameplay simply isn’t enough to keep a player hooked.

So what happens when you strip a game of all of its pesky gameplay and leave it with just a progression system? Clicker games. Gamers have been so conditioned to seek validation for their gameplay through extrinsic rewards that they’re willing to completely avoid gameplay as long as they get a cheap dopamine rush.

Clicker games take this gameplay-less formula to its logical conclusion by rewarding players for not actually playing the game. In clicker games, you get far more cookies (or whatever currency you’re trying to hoard) by simply letting the game run than by clicking or directly managing your game. The amount of effort required is less than minimal as you can go to bed and wake up with millions of new cookies, granting yourself a dopamine rush for doing exactly zilch. While it can be hard to predict gaming trends, I doubt anyone knew that some gamers would prefer games that you don’t play at all.

Why classical conditioning will destroy us all

Clicker games are the unholy lovechild of video games and classical conditioning. They are, however, themselves of a symptom of modern digital design and not the source of the infection. Nearly every modern piece of digital technology is designed using classical conditioning to keep you as hooked as possible.

For example, when Facebook creates a big red notification whenever someone likes your photo, they are classically conditioning you to associate social status with likes. Much like clicker games, Facebook provides joy in increments (likes instead of cookies in this case), quantifying something that makes you happy. Like a clicker game, eventually the high of a certain number will fade, and you’ll require more likes to feel the same amount of satisfaction. This creates an endless feedback loop that resembles addiction, showing symptoms of withdrawal and tolerance.

Companies try and keep you hooked to their platforms because it generates them more money, so they push the classical conditioning as far as it can get. At the risk of sounding like some sort of tech-averse boomer or pseudo-intellectual 14-year-old, yes, you are being conditioned. But so is everyone who occupies a digital space, so you shouldn’t feel guilty about it. The most important thing you can do is be aware of it.

Whether it be about video games or social media, always be mindful of classical conditioning. If you ever feel like you’re just going through the motions instead of getting some sort of genuine enjoyment out of these products you should take a break or quit entirely. Studies have shown that people who find themselves addicted to social media or video games are unhappier on average. It’s possible to enjoy these things in moderation and be a perfectly happy, healthy person. All that’s required is a degree of self-awareness and the ability to distinguish between cheap, artificial dopamine rushes and genuine joy.

That said, you’re perfectly welcome to spend hours clicking a cookie just to see a number increase. Skinner and his rats are having a hearty laugh at your expense.