There is something about mobile apps and games that makes us not want to pay for them. Or if we are prepared to pay for an app, we think the price should be heavily reduced compared to PC or console apps and games. We might begrudgingly pay 59 cents but $2.99 feels like taking out a mortgage or a loan for a car. It is a major purchase that needs serious consideration.

This puts app developers in somewhat of a bind. Developers have to eat, too, and mobile games and apps take time to build. Once they’re built, they need to be monetized. If an app is free, or too cheap to pay the bills, this usually means only one thing: ads. Even ads can fall short, though, which has led Google’s Android team to develop a new way for Android developers to monetize the games they’re distributing via the Android Play Store.

In a recent post on the Android Developers Blog, Google Play Product Manager, Patrick Davis introduced the idea of “Rewarded Products.” The new feature comes in the form of a new console for app developers that makes it easy for them to add rewards in their games for monetizable behavior.

The first example Google has given is a “Double Your Score” reward, which users can unlock simply by watching a video ad. In his blog post, however, Davis mentions that this is Google’s “first rewarded product offering,” which means there is a good chance there will be more types of rewards coming in the future, as well as different types of monetizing behavior too.

You might have already seen this type of reward before for things like extra in-game coins or bonus items. That is because this isn’t a new idea that Google has come up with. Developers have been using this trick for some time now. Google is merely picking up on the idea and adding the new console to make it easier for developers to implement it. 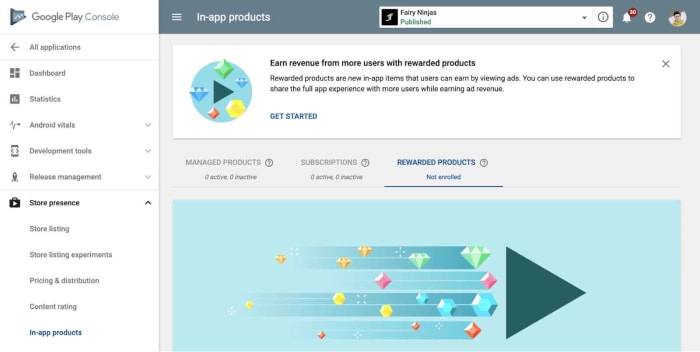 The new console is currently rolling out to Android developers in beta version, with a full roll-out expected soon. What this means for all mobile gamers out there is that we might soon see our free Android games changing somewhat, so that they can include more of these prompts to take monetizable action.

We’d love to know how you feel about these types of “Rewarded Products”. Would you feel comfortable cheating the games you’re playing by unlocking coins, boost your score, or gaining bonus items by watching ads? Let us know in the comments below.

Joker set to join the MultiVersus