If there is one thing the tech world loves, it’s a good buzzword. At the moment, increasing chatter about new ideas such as Microsoft’s Azure is focusing the spotlight on the latest candidate: cloud computing.

If you don’t really know what it is, don’t feel too bad. Even these experts interviewed at a recent industry event were a little, umm… hazy on the concept. So the question remains – what exactly is cloud computing?

Imagine a company that needs lots of computing resources – SuperTec Inc. At the back of their office, there is an airless closet full of blinking machines, known as the server room. Their tech guys probably guard it with their lives, threatening dire consequences for anyone who accidentally unplugs a machine or knocks a button out of place. For various reasons – space, complexity and cost being the most usual – the company decides to free themselves of this burden by transferring all of these resources to a online service. In other words, SuperTec Inc. will now do their computing in the cloud – basically a euphemism for the Internet – rather than basing it all in that dark room at the back of their office. 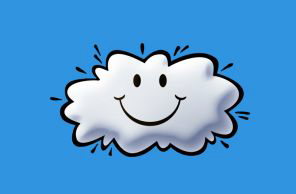 That’s where the term cloud computing comes from. The main benefits are what we mentioned above – space, complexity and cost. SuperTec Inc. will no longer have to find room for all those computers, servers and technical gadgets. It is also cheaper: before, SuperTec Inc. had to pay the IT guys a monthly salary, cough up when they needed a new piece of equipment, and so on, regardless of how much work Bob and Dave actually did or how often the machine was going to be used. In the cloud, they will be only charged for what they use; cloud computing is essentially a ‘pay as you go’ service. It is also less complex for SuperTec Inc. because now, as end users, they no longer need to worry about the cables and routers behind the technology they use.

That’s great for SuperTec Inc., you might be thinking, but what about me? Well, there’s a good chance that you have already cloud computed, whether you were aware of it or not! Have you ever used Google Apps? Well, there you go! Google Apps is a perfect example of how cloud computing can be relevant to an individual, rather than a company. Let’s say you want to draw up a spreadsheet detailing gifts from the family to your sister, who is getting married. You all want to get the happy couple something lovely, but you don’t want to double up on gifts. You clearly need to collaborate with the rest of the family.

Before the advent of cloud computing,  you would have to install a spreadsheet program, create the document, add your information, go online and email it to your Auntie Pat. Auntie Pat would then download the spreadsheet, install a program that could open it, modify it, upload it to her email account and send it to Uncle Jose, who in turn would… well, you get the picture. With ‘cloudware’ such as Google Docs, the whole operation is centralized – nobody needs to install programs, download/upload or email. It doesn’t take a genius to work out that this makes everyday tasks cheaper, easier and quicker, which is why the up and coming area of cloud computing is awakening so much interest, from companies and individuals alike.

Of course, Google Docs isn’t the only aspect to cloud computing for individuals, but it is a good example as it easily illustrates the whole basis of the concept – providing the service without the cost and effort of the infrastructure that creates it. Obviously there’s more to cloud computing than spreadsheets, but it’s more or less the idea. We haven’t even touched on the philosophical argument to cloud computing – whether or not its a good idea. That, however, really is a complicated conversation, so we’ll be saving it for another day!

Twitch is working on the sudden flood of new bot accounts