Hidden in the darker recesses of the E3 convention center, shadowed by the enormous displays put on by giants like Bethesda, Capcom, Nintendo, Microsoft, and Facebook, there are smaller companies pushing new boundaries in gaming technology.

We scoured the floor looking for the best and most interesting products, some of which are already available for purchase, others that aren’t even on the company’s website. This is pretty cool stuff!

While the AAA companies work on pushing graphics and storytelling boundaries, let’s give a shoutout to the up-and-coming innovators…

This will be nostalgic for some, just plain awesome for others!

MayFlash makes adaptors of many types, but the meat and potatoes of their business revolves around arcade stick controllers like the one seen above! You don’t have to worry about waiting for this product, many of them are already available on Amazon.

Since the product can already be purchased, the question is: how does it feel? Does it play well? Does it enhance the gaming experience?

The answer is yes to all of these!

We sat down with another E3 visitor for a friendly game of Mortal Kombat X, using an arcade stick rather than a PS4 controller. The result: we got our rear end handed to us because, full disclosure, we’ve never even played Mortal Kombat with a normal controller. BUT:

The nostalgia was real; we loved the feel of moving back and forth with the joystick and desperately trying to figure out which arcade button was block, attack, grab, and so on. Overall, it fully changed the experience of playing a video game into something new, difficult, and exciting.

But to be honest? Our main thoughts boiled down to: “This would be SO COOL for playing Dark Souls.” However, there’s no second joystick to act as the right thumbstick, which would make that quite a challenge…

While many companies develop rumble haptics – vibration sensations – to enhance gameplay, one booth we saw delved into the possibility of temperature manipulation!

If you visit TEGway’s website right now, they only sell thermoelectric pads which can be used to modify headphones and gaming devices. However, that will change soon.

At their E3 booth, we tested a controller that got icy cold while you watched a video of someone being submerged in a frozen river, then became hot during a clip of someone running their hand over a match.

How did it feel? Immersive, to say the least! Vibrations can simulate touch, but temperature control adds a whole new level of instinctive reaction.

We look forward to seeing the final reveal of TEGway’s gaming accessories! Keep your eyes peeled for: cooled headphones by the name EarFridge and haptic gloves, VR goggle attachments, and temperature-changing controllers under the umbrella of ThermoReal.

Some say mimicry is the highest form of praise.

If that’s true, Superhuman Streetwear by Volante Design has been praised by a whole bunch of knock-offs. The good news is: you just found the original creator of video-game inspired coats, jackets, and more!

We stopped by the Superhuman Streetwear booth, tried on a number of jackets, and talked to the people there. Here’s what we learned:

These outfits are NICE. They’re expensive, yes, but they’re also impeccably hand-made with excellent, sturdy materials. They’re lined on the inside for comfort and protection. They look great at Comic-Con and beyond. They grow even more comfortable the more you wear them!

Also, the employees love the company. Everyone we talked to had jackets of their own, which they purchased themselves. That, in and of itself, speaks volumes about the quality.

Finally, if you’re looking to get a coat, be prepared for a personalized experience. Rather than buying a pre-sized outfit, you send in your sizes and receive a product tailored to your measurements!

Here they are! We believe rumble haptics still represent a significant step in innovation. Although their products are often pricey, these companies are forging a way into a new field we hope, will someday be available at reasonable prices for the average consumer.

bHaptics has been around for a while, which is why their product shows more advancements than any others. This suit uses many rumble motors that can be activated in different areas for highly specified sensations!

In the recent Steven Spielberg film, “Ready Player One,” protagonist Wade Watts uses a futuristic haptic suit that can simulate real touch. bHaptics has come closer than any others to making that a reality, and their suit already looks like something from the future!

When will video gaming reach Ready Player One status?

GT Throne makes one product: a gaming chair that syncs vibrations in the seat and backrest to the sound volume playing through your headphones. As you might expect, they make that product very well!

We had the pleasure of sitting down for a game of Fortnite for a while. Not only does it have the quality one would expect from a gaming chair, the rumble gave every shot a true feeling of weight.

Firing a heavy sniper with this chair? Oh yeah, it felt awesome.

Woojer makes a solid product, albeit earlier in development than others. We didn’t feel a significant difference in the location of rumbles, which means the vibrations are tied generally to sound, without location diversification.

Still, they’re making a solid vest that performs reliably. You can even hook it up to your phone’s music playlist for “casual” listening, which means it’s finally possible to have the sensation of standing by a concert speaker without having your eardrums blown out!

The future is now. 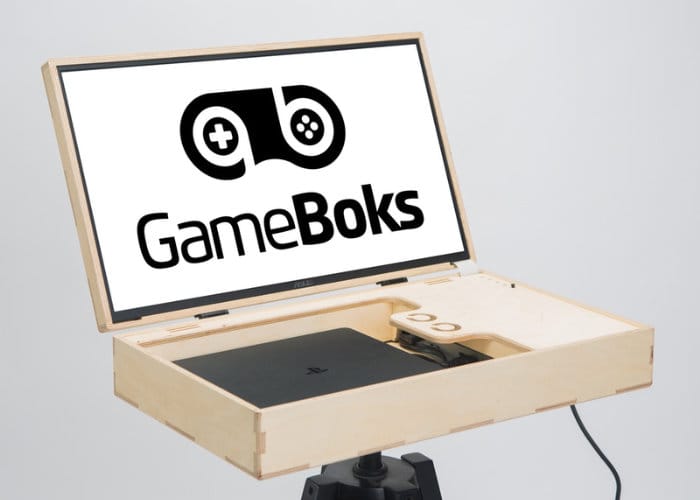 Want to chase down those portable Switch players with your PS4 in tow? This might be your first step!

The idea is simple: make a briefcase for stationary game consoles. Use velcro straps to securely keep the device in place, insert wires and hookups, then fit a TV inside! As long as you have a power cord, any console can become portable in a few moments.

Just remember: at this time, the GameBoks caters to PS4s, as their pictures imply. Also, the cost of €750 for a single box may be a deterrent for some. All that aside, however, just look at that beautiful craftsmanship!

Bionik makes a number of products, but their most innovative by far was a new controller for Xbox and PS4. You can’t even find the prototype on their website yet! This means we have to describe it…

Imagine a controller with buttons on the underside for your middle, ring, and pinky fingers. These can be activated and will replace the triggers/ bumpers to make sure your index finger doesn’t have to pull double-duty!

A good example? Check out the Xbox Elite Wireless Controller. It will appear something like this, but with more functionality for the user and cheaper price tag.

We’ve been waiting for VR gloves, and they’re here!

CaptoGlove finally made viable gloves that perform many functions of the VR controllers. This new technology could revolutionize the way we play games and interact with our devices.

Ah, who are we kidding? We really want to hold a sword and draw a bow in Skyrim VR. Please make it happen!

Honestly, we’ll stand behind anything that takes a shot at Catan! Gosh, we hate that game. And before you ask, YES, we’re bad at it.

Luckily, Blinks has a new take on game maps made of hexagons: colors are their own pieces, and activate with a touch. By connecting a game piece to the others, the information automatically spreads to the others with a fascinating LED light show. Then, you suddenly find yourself facing an entirely new challenge that could be one of many different presets.

It just makes sense: games play best with a controller or keyboard. Mobile games can suffer from virtual buttons that take up much of the touch screen, which should be reserved for the game itself.

Well, that’s about to end.

Ipega makes a large series of game controllers that range from the xbox-inspired one above to PS4 designs and original creations! These are fully-formed products available for purchase from their website.

Head on over and check them out!

There are pretty cool things being developed by small companies. Thanks for reading, we hope you were interested and entertained by the creativity shown by these products.

5 weirdest gaming accessories ever made