Hearthstone is a digital CCG (collectible card game) in which the objective is to drain your opponent’s health points to zero before he or she does the same to you. But you already know that; what you really want to know is how to get better. In comprehensive order, here are the exact steps to take to reach the rank you want—hopefully, you’ll get the coveted Legend card back in no time!

The first thing you should understand about Hearthstone is the way your deck synergy dictates how you play your game. Normally, this concept is generalized into six deck archetypes: aggro, midrange, control, tempo, combo, and zoo.

Once you understand your particular deck archetype, make sure to familiarize yourself with the others so that you can tailor your playstyle to best defeat your opponent’s deck. Naturally, knowing the “meta” or  “trendy” Hearthstone decks at any given moment in time will further advance your playstyle, because you can anticipate the decks you will face and be more prepared to face them.

In addition to understanding your deck’s synergy, you should have a good grasp on the cards you have and their mana curve. Mana curve dictates the number of cards you have at each mana cost. As a general rule, this also dictates your deck archetype. 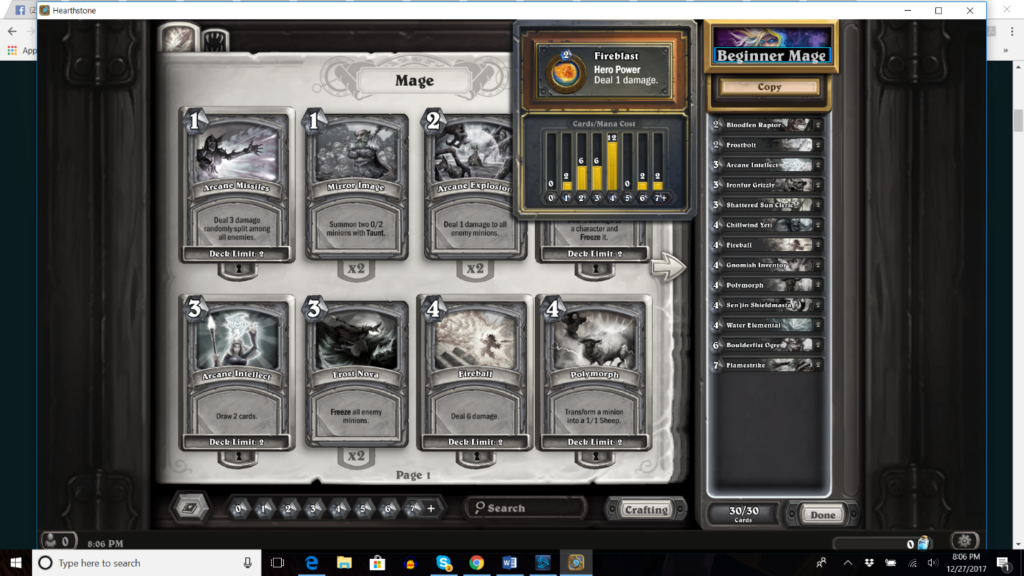 Another key concept to understand in Hearthstone is trading, which refers to the advantage gained or lost through the exchange of minions. (Read: If a minion dies during your turn, you traded something to make it happen.)

The goal in Hearthstone is to make even trades in order to gain a competitive advantage. For example, if you kill a Stonetusk Boar with your own Stonetusk Boar, you traded evenly. Likewise, if you trade a River Crocolisk for a Bloodfen Raptor, you’ve also made an even trade, because the attack and health of each card kill each other without overpowering or underpowering the other minion. And, in any non-aggro deck, you’re going to want to make a lot of trades. Keeping the enemy board clear is a good way to win!

You don’t need to buy anything to win at Hearthstone, but you will win faster if you have a large library of cards from which to make competitive decks.

I would highly recommend buying the “Welcome Pack” if you haven’t yet. It’s $5 and includes 10 classic packs and a guaranteed class-specific legendary. 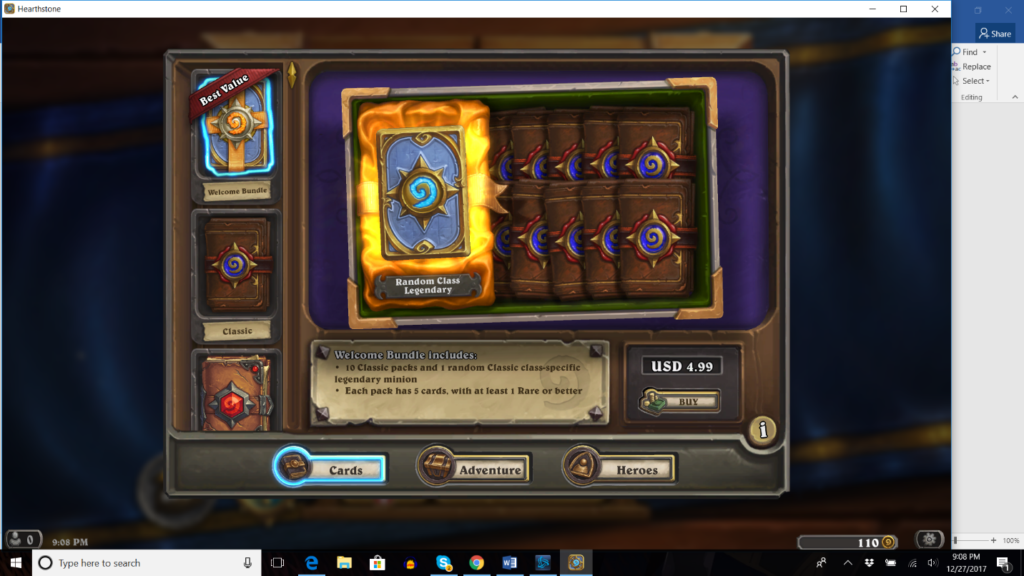 If you want to spend money, don’t spend it randomly on packs hoping for Legendaries. First, make sure you’ve picked a class you like (for beginners, Warlock is a great and low-cost place to start, as is Hunter, Shaman, and Mage). Next, look up decklists for this particular class on hearthpwn.com and see which sets benefit your class the most (you can tell by the little symbols next to the card names which expansion the card is in).

Next, make sure to play the Tavern Brawl whenever it pops up and win at least once. Free classic pack! Some other ways to earn free packs/cards are through quests, special events, achieving rank 20 in a season, reaching level 10 in each class, and arena. Arena is difficult for newbies, because deck building is really challenging when you’re first starting out and you don’t know the cards or the meta. However, if you’re good at arena, you can start a run for 150 gold and you can win packs, gold, golden cards, and dust worth far more than 150 gold.

One of the best ways to learn how to play is to watch champs play on Twitch and YouTube, as well as learning 1 on 1 at Fireside Gatherings.

On YouTube and Twitch, Strifecro and Trump are my favorite players when it comes to improving my game; Strifecro often explains his plays, and Trump’s YouTube channel has a training series on Hearthstone that is essential for new players, or just players who have yet to build the foundational Hearthstone knowledge. If you really need that foundation, check out the series here:

Also, make sure to watch the tournaments on Hearthstone’s Twitch as they happen. This will educate you on the meta, as well as how to play like a pro.

DisguisedToast, an incredible player and educator, has a page devoted exclusively to helping new players. The guides themselves are worth perusing; however, the star of this page is the zero-cost beginner decks for each class. So no matter which class you have chosen, you can start with these decks, buff them up with your Welcome Pack cards, and be well on your way to becoming a Hearthstone champion.

And don’t get discouraged if you’re not winning! You can win with these decks; you just have to know how to play them as well as play against the decks you’re bound to face up to Rank 20 (which should be your minimum goal in your first “season” or “month” playing Hearthstone). A lot of it is practice as well as trial and error. If you lose to an overwhelming amount of aggro decks, maybe your midrange deck isn’t cutting it. Play around with what you have, learn from the masters, and practice, practice, practice.

If community is important to you as a player, make sure to join and attend local Fireside Gatherings. You’ll meet amazing people, learn about the game, and gain access to tournaments in the area, which is the ultimate goal for a champion.

Another way to be involved in the Hearthstone community is to make sure you are active online. The best group for Hearthstone players is actually on Facebook, in a group called “The Inn: Hearthstone Group.” You can get your questions answered here; most of the players are more than willing to lend a helping hand to newbies. And it’s a great place to make friends and build a supportive group of fellow players.

Is Hearthstone “pay to play?”

The short answer: mostly. However, compared to any other card game or eSport, Hearthstone is incredibly affordable. The good news is that you can still make it to the top if you practice every day and refuse to let the high-cost decks get to you. So many good decks are low cost, and you’ll be able to craft them without much time invested in the game.

Zoolock and most Hunter decks are a great place to start for free players. Once you have your Welcome Pack, try to stick with the class you have legendary cards for—or even just strong meta cards. From there, you can build wins, and consequently, gold, which you can invest in packs, which leads to dust, which leads to the cards you need… which leads to more wins.

Staying motivated to become a champion when you keep losing or can’t afford a better deck is hard. It really is. The bottom line is, your passion for the game brought you here, and your passion for the game will keep you going. You can make it to Rank 20 with cheap decks, and if you play every day and complete the daily quests, you’ll reach your goal. It’s all a matter of dedication, persistence, and passion. Hearthstone is an incredibly rewarding game when you get involved in the community and set competitive goals for yourself.

Honestly, the game in and of itself is a reward. It’s fun, engaging, challenging and, as the saying goes, “Easy to learn, hard to master.” Hearthstone is a life-changing game. From Hearthstone, you’ll make incredible friends, flex your brain, and learn strategies and synergies that make you see things in a different way. Above all, Hearthstone is so much fun. It’s hard to play it without smiling.

Follow these tips, and you’re well on your way to becoming a Hearthstone champion. Good luck, and fare thee well, adventurer!