There’s a common mistake among gamers that if you’ve played one RPG, you’ve played them all. The genre has been around since the earliest days of gaming, yet many gamers picture RPGs as monotonous, grindy slogs where fantasy characters take turns hitting each other. While there are several RPGs that can fall under this description, the last several years have brought us many RPGs with unique, fresh ideas that expand upon the classics of the genre. Games like Undertale, LISA, and the Souls series have shown that the genre isn’t getting stale. But what exactly makes a good RPG? And why is designing one so difficult?

Here are some of the most essential components of a good RPG: 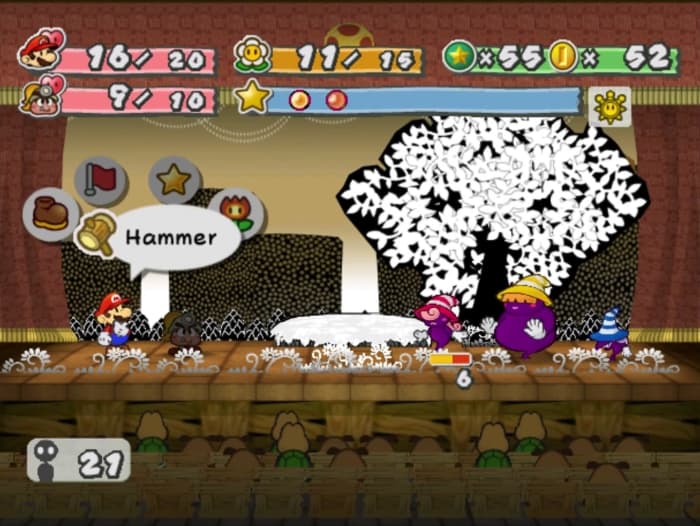 A common criticism of  RPGs is the monotony of turn-based combat. Battles could be seen as timewasters where the combatant with the better stats keeps clicking the same button until they win. That isn’t to say that turn-based combat has no place in 2019, but there must be either a hook or some sort of rhythm to the combat.

An excellent example of a hook is the “action command” system found in the various Mario RPG series. In the action command system, the player can press buttons at the right time to change certain attacks. For example, pressing A as soon as Mario’s jump attack hits an enemy in Paper Mario causes him to jump again, adding extra damage.

On the flipside, pressing different buttons with the proper timing while the enemy is attacking in the Mario & Luigi series causes the pair to either jump over attacks (avoiding damage) or hammer the enemy for a counterattack. The action command system adds a sense of liveliness to battles, forcing the player to constantly pay attention and engaging them with reflexive gameplay.

It’s also entirely possible to create engaging turn-based combat without including any action elements. Persona 5 is widely considered to be one of the best modern RPGs, and its turn-based combat system remains engaging for hundreds of hours even without any hooks or gimmicks. At first glance, the game features a typical attack/guard/item/magic combat system. So how does P5’s combat remain fresh?

In Persona 5, how you start a fight is just as important as the fight itself. In the overworld, there are three ways a fight can start: you can sneak up on an enemy and ambush them to give your party a free turn, the enemy can ambush you to give themselves a free full turn or you encounter each other at the same time. Having one free turn makes all the difference in the world due to the game’s “One More” system.

All combatants, both enemies and party members, have specific elemental weaknesses, and getting hit by an attack of that element will cause that combatant to fall down. When a combatant knocks another down, they are allowed a free turn (One More). If the player’s party manages to knock down all of the enemies, they are able to hold the enemies hostage, beginning a sequence where the player can either deal massive damage with an All-Out Attack, demand money, or convince the enemy to join them. Choosing any of these options usually ends up ending the battle, allowing players to quickly dispose of enemies whose weaknesses they already know. While this system may sound like it makes combat easy, the players are also vulnerable to being knocked down and comboed to death, making momentum and speed essential to victory.

This system simultaneously allows regular enemy encounters to be quick and breezy while allowing boss battles to be drawn out, epic affairs. Boss and miniboss enemies typically have few weaknesses, forcing the player to balance dealing damage and surviving rather than ending the battle as quickly as possible, massively overhauling the way they approach combat. This sense of versatility and momentum is what allows Persona 5’s combat to be the most dynamic turn-based combat system ever created.

An engaging turn-based RPG must either feature some sort of engaging hook or a sense of rhythm that eliminates the feeling of “taking turns whacking each other”.

There’s a reason badly designed RPGs feel like a full-time job. The quests you’re given feel like arbitrary tasks (ex: Kill 10 enemies! Find 10 blue gems!) rather than rewarding, story-worthy adventures. These quests offer all of the tedium of actual work without the sense of productivity and accomplishment.

To avoid “checklist quests” and “fetch quests,” quests must feel like a natural extension of the game’s world.  Finding quests should not involve a collection of NPCs hanging around a hub with exclamation marks over their heads, dolling out quests to anyone who talks to them. Conversations with NPCs should seamlessly and naturally segue into quests, leading to the feeling of helping real people with real problems. Here’s an example of this done correctly in the Skyrim quest A Night to Remember:

If the player stops to relax at one of Skyrim’s many taverns, there’s a chance they can run into a man named Sam Guevenne. If spoken to, the friendly man challenges the player to a drinking contest. After getting sufficiently sloshed, the player blacks out and wakes up in Markarth’s holy temple. What follows plays out like a fantasy version of “The Hangover,” and has the player return stolen goats to giants, undo their marriage to a Hargrave, and even encounter a god of mischief.

This quest is brilliant for a few reasons. For one, when the player talks to Sam, there’s no indication that a quest is starting at all, what happens is a natural consequence of the actions of the player and an NPC. Additionally, the player slowly unravels a story throughout the quest. The story is expansive enough to be a tale worth telling without overtaking the urgency of the main questline. Lastly, the quest adds some flavor to the world of Skyrim, giving some insight as to how the people of the world live their lives and react to specific situations. Quests like these create water cooler moments far above the typical fetch and checkmark quests that invade many RPGs.

In today’s loot box and grind-heavy gaming landscape, gamers are having their time wasted more than ever. Unfortunately, RPGs are the guiltiest of all genres for this. When adult gamers sit down to play a game, they are placing faith in the game to entertain and engage them for their few moments of free leisure time that day. They’re not in high school anymore, and they can’t stay up till 3 a.m. playing games anymore. If you want to make a successful RPG in 2019, you need to respect the player’s time. This rule takes precedence over everything else, including creating a unique battle system or interesting quests. Here are a series of tips that prevent you from wasting the player’s time:

What RPGs do you think follow these rules? Which break these rules the worst? Let us know!