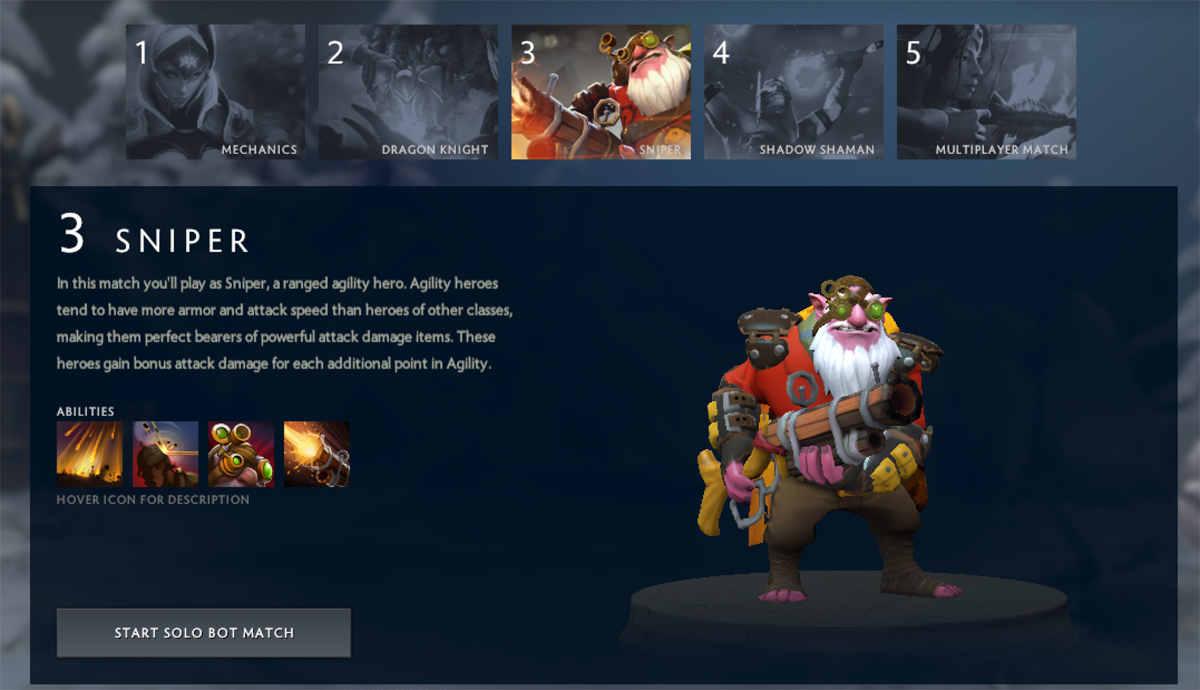 Dota 2 is like a soccer game, where each team has five players, but instead of trying to score in the other team’s goal, the objective is to destroy it. The goals are called “ancients,” and as you work to destroy them, you’ll also try to annihilate the other team. No two games of Dota 2 are the same, meaning every game offers something new. It’s a competitive game full of strategy, stealth, communication, and teamwork.

The Dota 2 community is an extremely competitive scene and there’s a steep learning curve. But the game offers tutorials and offline options for new players to get up to speed. It’s important to remember every player was once new to Dota 2, including the professional players who now compete in global tournaments. Here are some steps to start off your path on Dota 2:

Learn the Mechanics of the Game

It’s important to find a play style that works for you. The Learn tab in-game is a great place to start. Their tutorials guide new players through the mechanics of the game and cover the basics that every player needs to know. This includes camera control and control of your hero, leveling up, using a hero’s abilities, and basic combat. These tutorials help you learn the fundamentals of the game. 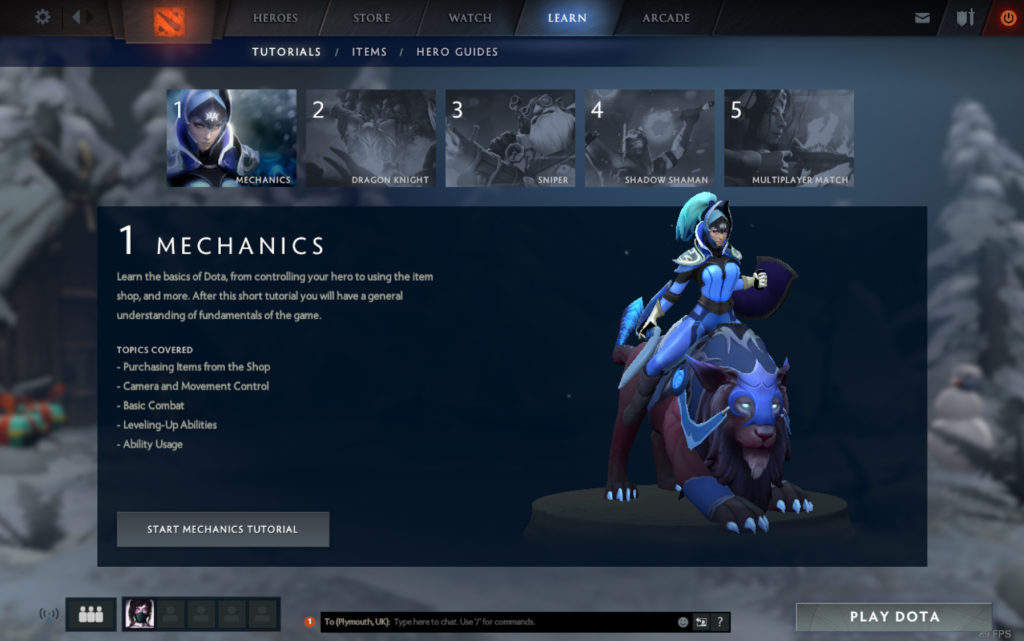 After you feel comfortable with the mechanics, you should start to experiment and learn which heroes work best for you. At the start of every game, each player picks from a pool of over a hundred heroes. Just remember, not every hero is equal, and each hero plays a different role within the game; some will lead, playing aggressively and racking up kills, while others support the team, keeping the enemy team in check. The tutorials introduce three heroes to you who fall under three categories: strength, intelligence, and agility. 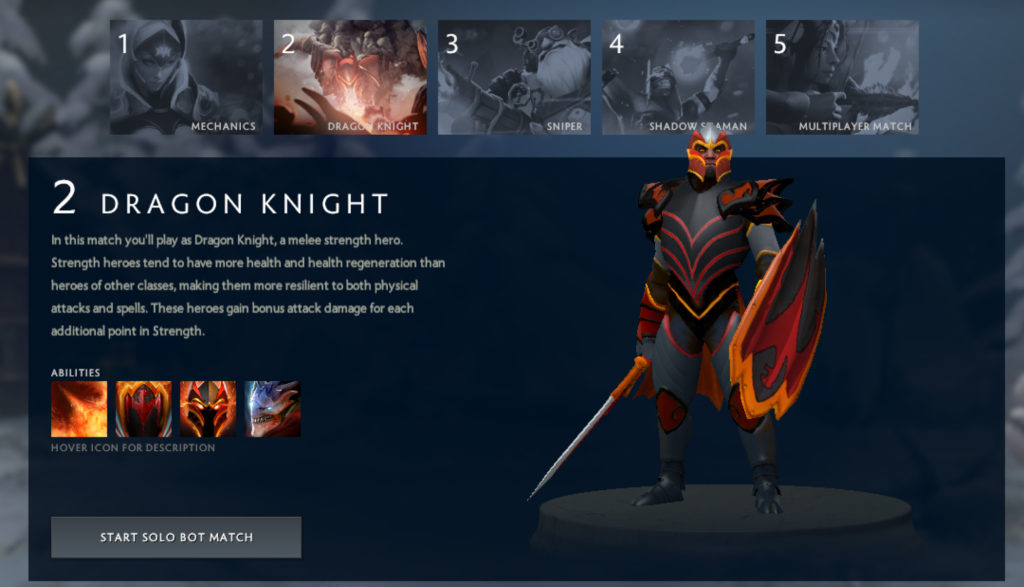 Strength heroes tend to have a higher HP pool. They can be described as the tanky heroes, and are good for tanking spells and initiating fights, depending on their set of abilities. This particular tutorial starts you off with a hero called Dragon Knight, who is both tanky and has an ability to stun enemies, which makes him perfect for picking fights or stunning any heroes that are hard to lock down. The tutorial loads the player into a bot match, guiding them through the game, advising them which abilities to level up, and what items to buy. These guides are also available in online matches and are recommended for new players. 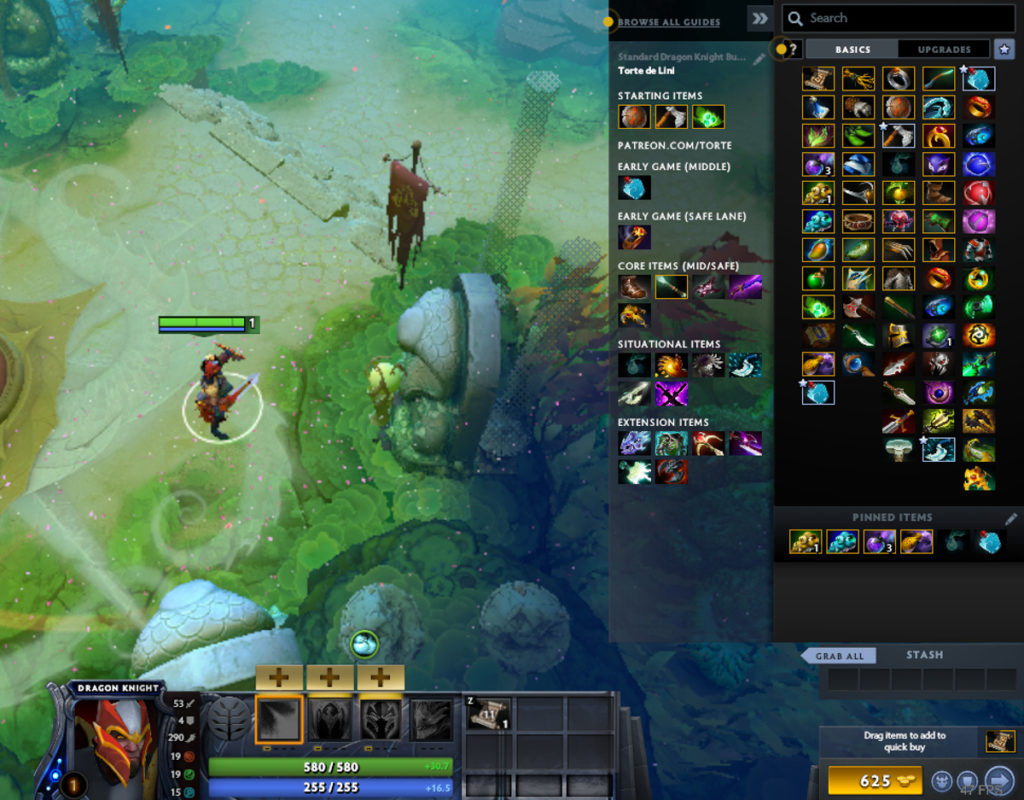 Agility heroes build items to help them deal more damage with their base attacks and abilities. 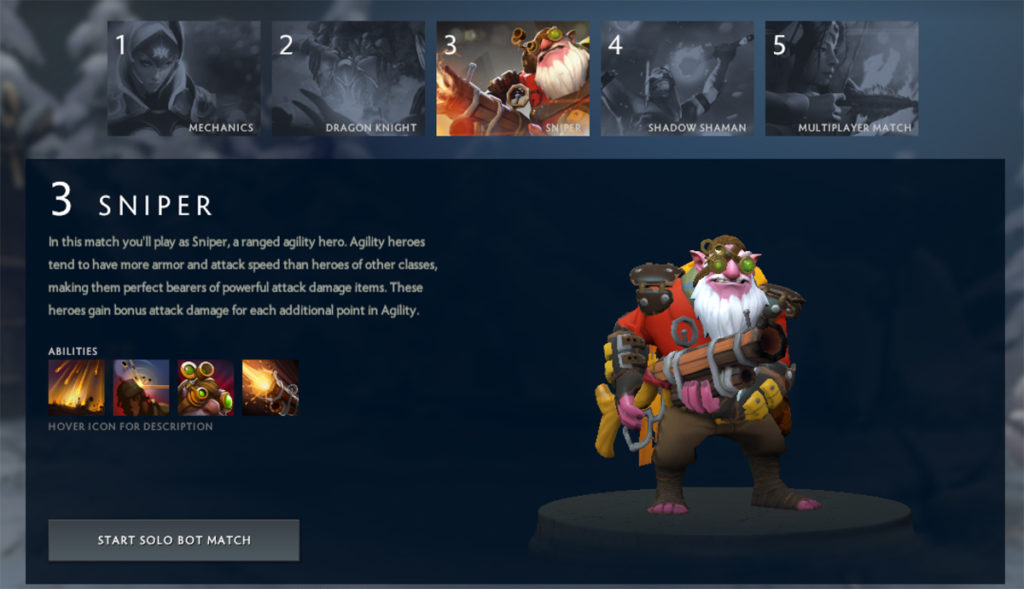 These heroes tend to be the most flexible when it comes the “laning” stage of the game; Sniper for example, is regularly played in the middle lane, but is also a great safe-lane carry due to his long-range base attacks. Agility heroes have higher attack speed than strength heroes, but usually have a lower HP pool, thus making them more susceptible to taking damage in-game. Heroes that are played as carries tend to need time to farm, and therefore rely on their team to create space for them to do so. Choosing a team that is flexible in their ability to win team fights is important.

Most of the intelligence heroes tend to be played as supports in the safe-lane alongside their carry, harassing the enemy heroes and ensuring their carry gets the farm they need. 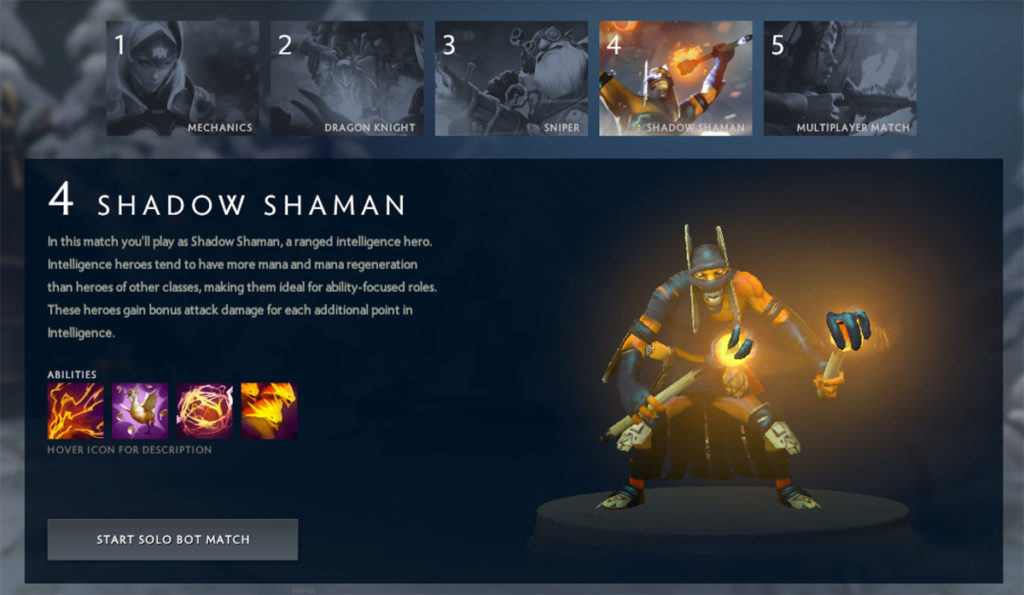 While intelligence heroes have a lower HP pool, making them squishy and easy-to-kill in-game, their mana pool is higher than most heroes, meaning their abilities are good to use repetitively. Intelligence heroes are very ability-focused, so players can build items to make their abilities stronger. Shadow Shaman, for example, has two abilities to disable enemies and hold them in place in fights, making him a great support to lockdown enemy heroes. Players who play support can also buy items to aid their teammates, such as a Mekanism to heal nearby allies, a Glimmer Cape to make a teammate invisible from the enemies, and a Force Staff to help teammates escape from tricky situations. More about items and what they do can be found in the Learn Tab, under Items. 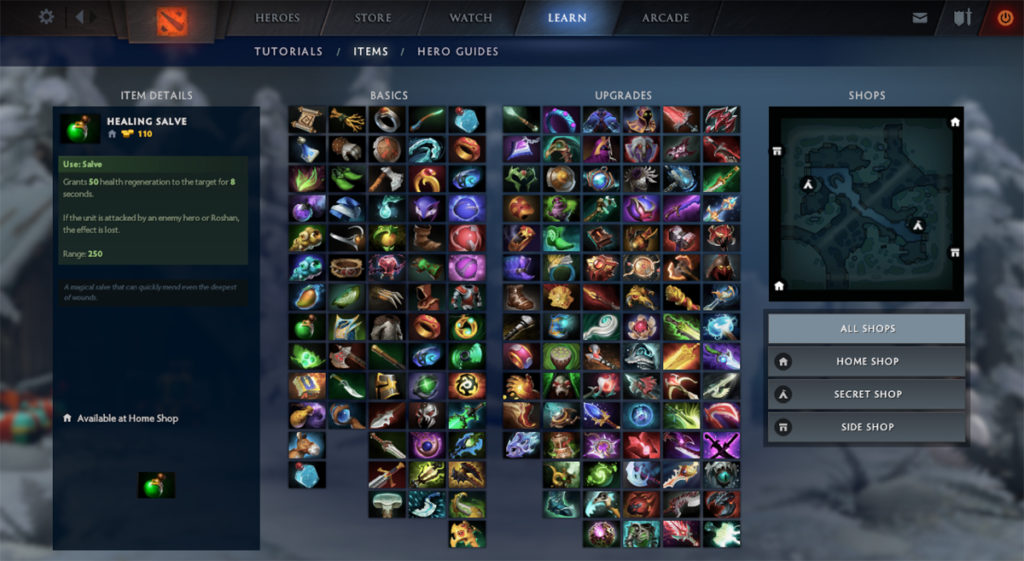 Finding a hero that works for you is extremely important, as every hero has a different play style and role in the game. New players tend to start off playing heroes that act as supports, as it is generally considered to be an easier role with less pressure and responsibility towards achieving in-game objectives. However, others would argue that a hero played as a carry is usually more fun to play. It’s important to experiment with a variety of heroes to find what works best for you.

After finding heroes that you feel comfortable with, playing bot matches before going up against other players is a good way to practice the game. Players can choose whichever hero they wish to play, and both their teammates and the enemy team are filled with AI bots, which then get allocated heroes from those left in the pool.

Diving straight into matches against other players can be disheartening, as you may come up against players who have put hours of practice into the game. Playing a bot match is slower, and easier to get a feel for the game, which is what new players need to experience before getting into the pace of an online match.

Players are free to pick whichever hero they like in a bot match, and can choose the lane they want to play in, whereas other online players can be persuasive, and pressure their teammates into picking heroes and lanes they feel uncomfortable with. You can set the level of difficulty in a bot match from passive to unfair, depending on your skill level. If you have a friend who also plays Dota 2, you can also play a bot match with them, as you can choose between solo and co-op. 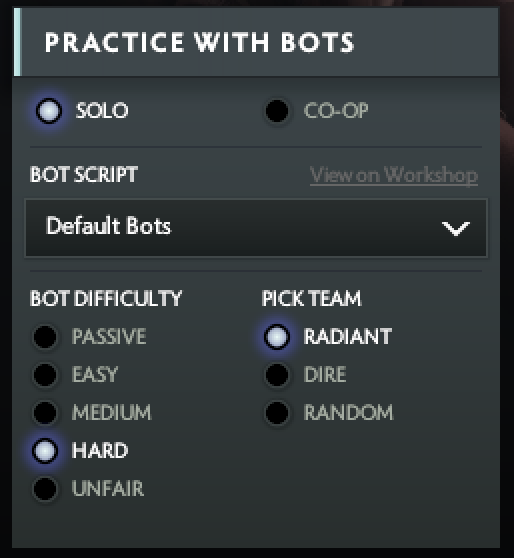 Only after a player has played several bot matches, and has found a few heroes that they feel comfortable playing, should they queue for an online match. Bot matches are great for experimenting with new and unfamiliar heroes, and learning the game while playing it.

Once players have an overall feel for the game and are comfortable with their play style, they can then practice their skills against other online players in a multiplayer match. There are many different types of matches to play online, but the most common is an all-pick match, where every player can choose their own hero to play out of the pool. Teams take turns picking heroes until all ten players have picked a hero.

After buying their starting items and making their way toward their designated lanes, players begin the early game gaining gold by doing the last hit of damage to creeps. Creeps spawn in every lane, and gaining the last hit on them is how heroes gain farm. Carry heroes should be the ones taking these last hits, while supports can deny friendly creeps to stop enemies getting farm. This farming process, alongside harassing heroes by either right-clicking them or using abilities, is called lane equilibrium. Getting the right lane equilibrium can be difficult for new players, but it is something important to learn to ensure your team gains an advantage in-game, which can only be done through practicing games.

Through multiplayer matches, players can learn what heroes do and don’t work together, what the best strategy is for winning the game, and learn how to become better at carrying or supporting their team.

As with most elements of Dota 2, practicing is the only way to get better at the game. Professional players have put thousands of hours of practice into the game to get where they are. There are however many guides to watch on YouTube, which can teach players tips and tricks of the game. Here are some of the best YouTube channels to check out for players just starting out in Dota 2: