Making programs that can’t be uninstalled easily is a software crime in my book. It’s bad enough when applications leave behind folders and files after you’ve dragged them to the Trash (I recommend free AppCleaner helping prevent this) but those that actually leave behind memory sapping and CPU guzzling processes are simply bang out of order.

Which is why if you’ve ever installed McAfee VirusScan (formerly known as McAfee Virex) on a Mac, you’ll need more than the Trashcan to get rid of it. For ages, I had been mystified by a couple of processes running on my system labeled “VShieldCheck” that were sometimes hogging up to 30% of my CPU. A few Google searches later and I realized that these processes were associated with McAfee VirusScan for Mac which I’d tested and uninstalled over six months ago!

The solution I found is to use an uninstaller which comes bundled with the original download. However, I’d obviously deleted the original download a long time ago so my only option was to download McAfee VirusScan, install the darn thing again, and then use the removal tool to get rid of it once and for all. However, even more frustrating, to download it again, I needed to sign-up for a McAfee account!

To save you going through the same ridiculous process I had to, you now download the official McAfee VirusScan uninstaller on Softonic. No sign-ups or wild goose chases needed. Make sure that McAfee Virus Scan is definitely installed on your Mac (if not re-install it) and then run the installer. 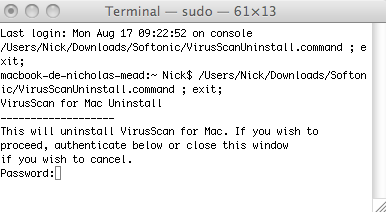 It opens a dialog in Terminal where you have to enter your password. After that, removal takes just a couple of seconds and you’re left with no nasty process remnants.

Incidentally, since removing the VShieldCheck processes associated with this program, my Mac has been running as quiet as a mouse. Especially when using Parallels, the cooling fans would scream like a jumbo jet taking-off and it’s my guess that these virus scanning processes were going into overdrive and putting too much load on the RAM and CPU.

Thanks for nothing McAfee!