As Nick mentioned in his post yesterday, Google has launched Sky Map, an astronomy application for the Android mobile system that lets you gaze at stars in a more original way. You no longer have to worry about city light contamination or clouds covering up the sky. In fact, you don’t even need to wait until night comes. With Sky Map you can look at the stars anytime, anywhere, right on your mobile phone screen.

The app takes a while to load, though according to Google developers these slow start-up times have been improved in the latest version. Right after launching, Sky Map shows the star map that’s currently over your head, according to your position – which the phone establishes via GPS.

Thanks to Android’s special sensors and the great compass functionality, Sky Map detects the direction you’re facing or moving, changing the star layout in real time accordingly. The overall effect is really impressive! 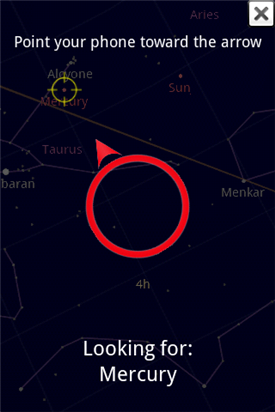 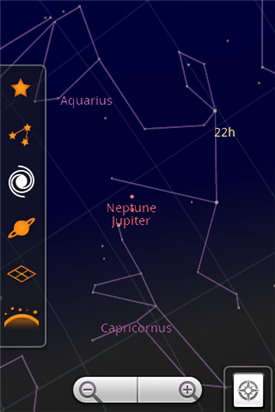 If you press the menu button on your phone, you’ll get a menu bar with three options: search, settings and about. The Search function also makes use of Android’s compass: simply enter the name of any sky element you want to locate (planets, satellites, stars) and an arrow will indicate where you should point your phone to in order to find that object.

The settings menu lets you choose which layers to show and which ones to hide, and also includes the possibility to set your location manually, either by entering a postal address or by using latitude and longitude degrees.

Tapping on the screen also gives you access to the choice of layers, as well as to the zoom menu. Unfortunately no matter how much you zoom in, you won’t get any realistic photos: just dots and lines.

Sky Map is a fun app that astronomy lovers will surely love. As for the rest of us, I guess it’s a nice way to show off our phone’s capabilities to other people – and drain the battery a bit more, for that matter.