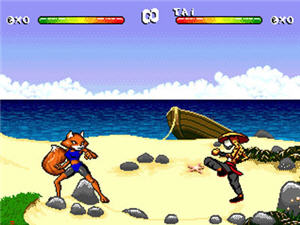 Thanks to the MUGEN games engine, the Sega classic Brutal: Paws of Fury has been given a new lease of life and seems to have lost none of its popularity. Nowadays, it has become one of the most popular combat game downloads on Softonic due to its excellent playability and original MUGEN-based characters.

This 2D fighting game follows the trend set by Street Fighter and Mortal Kombat but it’s much more than just a beat-em-up. Whereas the former have digitised characters, the characters in Paws of Fury are original animal-style cartoons, which gives the game its distinctive flavour. What’s more, it also has a rather original and unique premise. The original Sega story goes that the Dalai Lama has organised a martial arts contest for animals and the final bout is against the great man himself! (although we never got that far).

The 12 cartoon-style characters each have their own capabilities, strengths and weaknesses ranging from ‘Kung Fu Buddy’ to ‘Tai Cheetah’. Kung Fu Buddy pulls out some Bruce Lee style moves whilst Tai Cheetah appears to perform something in the range of meditation combined with self-defence (he’s naturally very quick though). You can choose to simply go one-on-one against the computer, form a two man tag team with a friend, or even a four player battle mode if you’re looking for a mass orgy of animal combat action. The controls are kept to a minimum so as not to complicate the fast and furious gameplay – there are 3 punch moves and 3 kick moves with only a couple of combos thrown in for good measure.

There are no ‘special moves’ in terms of fire balls or bolts from the blue like in Mortal Kombat but the game doesn’t get boring. The normal moves that are available correspond to the character that you are playing such as karate or judo, meaning that it’s more technical and certainly less bloodthirsty than similar games. As a result, Paws of Fury is a particularly good choice for parents who want their children to play something that’s fun but doesn’t feature heads rolling or arms flying off.

The action is backed up by a techno soundtrack that adds to the atmosphere, although this can become incredibly annoying after several bouts. The action is also very, very cheesy – if you can imagine an animal-cartoon version of Enter The Dragon (with all the sound effects) you get the picture. However, some will also see this is a plus as it adds to the charm of the game.

If you’re looking for blood, gore and special moves galore then look elsewhere but if you fancy trying a totally original combat game, Brutal: Paws of Fury should quite literally unleash the animal in you.

Microsoft PC Manager promises to give your PC a boost