Soon you will be able to bark orders at your TV, telling it to record the latest episode of Breaking Bad, or find a good Clint Eastwood movie for you to watch – just with your voice. Voice app developer Vlingo has revealed that it has developed a voice control system for a leading (unnamed) TV manufacturer, which is due for release in June this year. 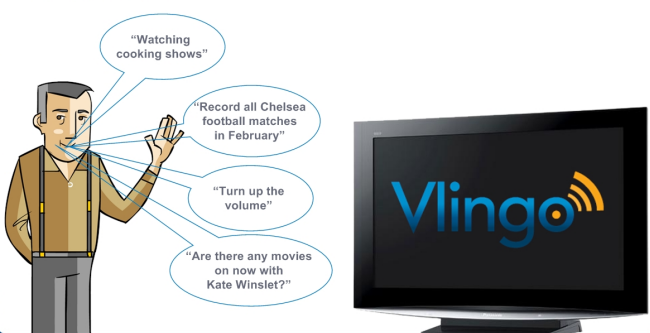 The Internet-enabled device will come packaged with Vlingo’s voice and virtual assistant technologies, allowing users to command the device through speech.  Users will be able to tell the TV to perform certain common television functions, such as recording programs, as well as ordering it to carry out internet-based actions by saying things like “Update Facebook, or “Find my friends on FourSquare”.

Dave Grannan, President & CEO of Vlingo told us how Internet TV is an area the voice control company is very keen to move into, as it looks to expand on the success of its mobile apps:

We are really excited about this because the use case for Vlingo Virtual Assistant in this paradigm is probably the most powerful. Most of us have seen the failed attempts at connecting a keyboard to a television set. Having a natural language voice interface for a television will be a very powerful thing.

Grannan also revealed that Vlingo intends to launch PC and Mac versions of its popular Virtual Assistant application. The company is also working on an in-car voice control application for Hyundai. Known as Blue Link, the software will allow drivers to speak commands such as “turn the air conditioning up”, “play the Beatles” or “find the nearest petrol station”.