Battlefield 4 developer DICE has explained the changed being made to the game following the online beta testing of the last few weeks. There are lots of bug fixes and some gameplay balancing, although this will continue after the game’s release too.

The beta has come in for criticism from PC gamers especially, who had problems with low frame rates and jerky gameplay, and DICE is working to optimize performance better for the launch. 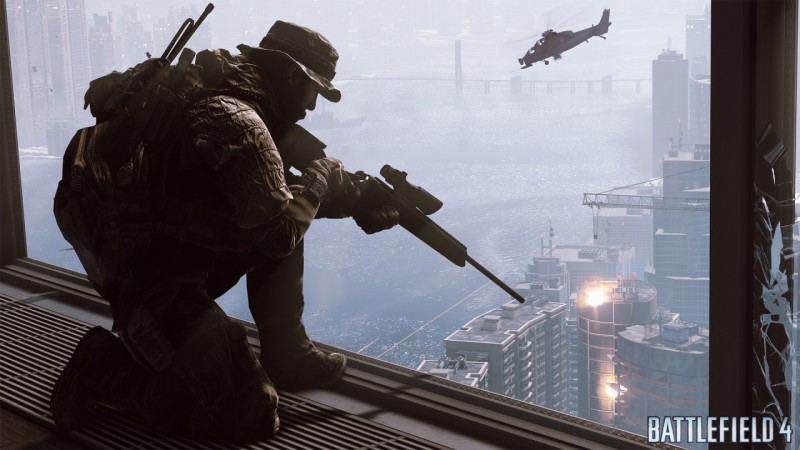 The funniest fix is for the ‘elevator catapult’. DICE says ‘the elevators were never designed to act as a catapult or teleporter.’ This bug, that sent players flying into the air when they used an elevator button, resulted in some good YouTube videos, but it will be fixed by release day.

Low frame rate/stuttering
PC players may have experienced trouble in the Beta getting the game running at a good frame rate. Rest assured that we’re using the information we received to optimize the performance for the launch of the game. We also released three game client updates and a number of game server updates during the Beta to address some of these issues and to gather more information to ensure a smoother launch.

Stuck on loading screen
We have identified some of the reasons why players, mainly on PC, were getting stuck on the loading screen and are currently working around the clock to decrease the rate at which this occurs. The latest PC patch for the Beta helped for some players and we are confident we will be able to minimize this issue for launch.

High CPU usage during the Beta
CPU usage could sometimes skyrocket for dual, quad and six-core processors. We identified some of the reasons and released three patches with fixes that went live during the Beta, to address the problems. This was a true Beta, and as such all the crash reports that were generated during this period will actually help us make a better game.

Controller layouts (X360/PS3)
We’ve increased the available controller options in Battlefield 4, including the new controller layout and multiple alternatives that we hope will make you feel right at home. If you’re more comfortable with the controls from Battlefield 3, we’ve got you covered. Just by bringing up the options menu, you can choose the “Veteran” layout, which is similar to that in Battlefield 3.

Empty server listings (X360/PS3)
While in the Server Browser you may have seen lists of empty servers. By changing the filter options, you’ll be able to find populated servers that you can join. You can also use the “Quick Match” function to quickly get into the action.

The elevator catapult (All platforms)
Although an interesting concept, elevators were never designed to act as a catapult or teleporter. The bug where the elevator button would catapult you up into the air is fixed for the final game. But we did enjoy all the crazy videos you’ve posted. Thanks!

Gameplay balancing
We are still balancing gameplay, and in true DICE fashion will continue to do so well after the release of Battlefield 4. Below are just some of the gameplay changes based on your feedback that we’re making in time for the launch of the game.

-Fixed how the player only receives a single local damage sound effect if he or she was the victim of a quick, clean kill.  The sound and camera impact effect had too long a cool down between hits. This should improve the responsiveness of being killed and taking damage.

-Reduced the fire rate of the AK12 in burst from 1000rpm to 750rpm. The rate of fire was too high when combined with the low recoil of the weapon, making it more powerful than intended in burst mode.

-Reduced and rebalanced full auto accuracy based on rate of fire for all automatic weapons to balance low ROF weapons. Low ROF weapons were remaining accurate long enough to get easy kills outside of their intended optimal range.

-Increased the default throw distance of the portable ammo and med packs. This makes it easier to throw these packs to teammates.

-Portable ammo packs now reload 2 magazines of bullets instantly and up a total of 4 magazines per pack over time. The player must stay on top of the ammo pack in order to benefit from all of the ammo reloading. Grenades, RPGs, and other explosive launchers do not benefit from the instant reload function of the Ammo Pack.

-Increased the muzzle flash of the 25mm and 40mm launchers to make their threat position more visible.

-Fixed an issue where the knife stab didn’t align with the kill event.

-The revive time has been increased from 7s to 10s.

-Fixed some descriptions of weapons for vehicles that incorrectly described the function of the weapon.

-Increased the speed of all TOW guided missiles to 75m/s from 50m/s so they can catch-up to fast vehicles like the Quad bike.

-Increased the sustained fire accuracy of the Coaxial LMG on armored vehicles because it was underpowered.

-Reduced the damage the 40mm and 25mm infantry weapons do to armored vehicles to highlight their anti-infantry role.

-Reduced the damage main gun on the IFVs against other armor to highlight their primarily anti-infantry role.

-Fixed an issue where the tank main gun did not correctly hit the center of the crosshair at all times.

-Multiple options are now available for controlling how your vehicles steer with a joystick on all platforms, as well as improved the responsiveness of steering while accelerating.

-RPG7 and SMAW can no longer lock on to Laser Designated Targets. It was inauthentic and not balanced.

-Fixed some projectiles not warning vehicles when they were fired on a Laser Designated target. Reduced the lock on distance for MBT LAW missiles to 350m from 500m. This gives the IGLA the clear long range AA role for soldiers, and keeps the team play element of Laser Designation.

-The kill string in the score log now appears sooner, making the UI more responsive to a kill event.

-The aim assist on X360/PS3 has been tweaked to be more consistent at all ranges. The assist was over powerful at close range, and not powerful enough at medium range. Players should now find that close combat requires much more player input and the snap to a target is far less forgiving. At medium range the player should experience a bit more assistance tracking targets, but generally still reduced aim assist effectiveness.

-Fixed a string in On Foot PC key bindings that should have read “CROUCH (TOGGLE) / PRONE (HOLD)”.

-Removed an unused “Underslung” key binding on PC, the “Select Gadget 1″ key binding now controls both of these actions as expected.